On This Day in Typewriter History (LXXXIX)

THE FOX
A BATTLE GRAND
IN GRAND RAPIDS 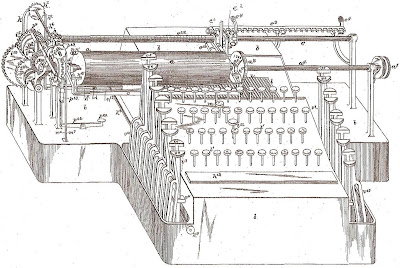 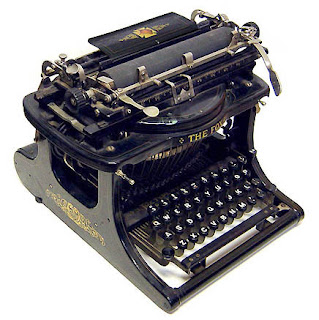 Richard Polt Collection
Willis Joseph Perkins, of Grand Rapids, Michigan, was nothing if not ambitious.
Perkins was persistent in trying to produce a quick but efficient, durable yet uncomplicated typewriter. And he was especially keen to do so in order to once more outsmart his business rival, William R. Fox.
Typewriter history shows that Fox won this particular Michigan mano-a-mano. Fox at least had typewriters made in his name, and very good ones at that.
But the confrontation between Perkins and Fox – which went all the way to the courts - had in fact little to do with typewriters that were or were not made. At the root of it were miter trimmers. 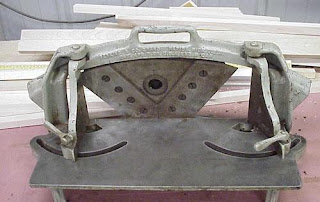 Perkins trimmer
And in this battle of wits, Perkins might have felt be had carried the day. At least he won the court case with Fox over patent infringement. Yet while Perkins trimmers were manufactured up right up to the Great Depression, Fox trimmers continued to be made for another 30 years, until the early 1960s.
Much of this rivalry appears to have involved skulduggery, with tactics that were often underhand. In most cases, Fox seems to have been the victim rather than the perpetrator.
Looking back on the chain of events, it is difficult not to feel some sympathy for Fox, whose misery finally came to an end when he fell to his death off the roof of his factory in Jackson, Michigan, in 1934.
Fox had arrived in Grand Rapids from Middletown, Connecticut, in 1880, full of bright ideas about typewriters and carrying with him a patent for a universal miter trimmer. He first went to work for Willis J. Perkins as a draughtsman. Fox soon found people and events would conspire against him. 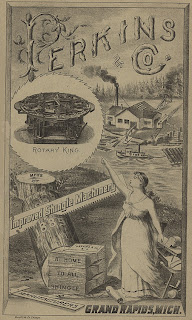 Having left Perkins after five years' service, in 1885, to set up his own factory, in competition with Perkins and to (eventually) make typewriters and in the short-term his own miter trimmer, Fox employed a salesman called Joseph W. Oliver. Big mistake. In 1889, Fox and Oliver argued, violently, and Oliver left the Fox company, taking with him all he had learned about miter trimmers in the intervening four years. He would soon find an ally in Perkins. Oliver and Perkins established a new company, the Grand Rapids Machinery Company, with Perkins as owner and Oliver as manager. And that’s when Fox’s troubles really began. 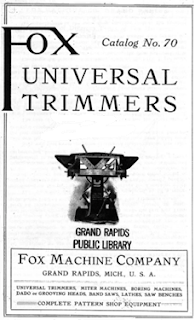 Fox decided to sue Perkins and Oliver, believing Oliver had taken the Fox design to Perkins. This frightened off Perkins sufficiently for Perkins to sell his share of Grand Rapids Machinery to Oliver. But before doing so, Perkins was clever enough to patent the Oliver (Fox?) miter trimmer in his own name. Oliver kept the new company going, but also founded American Machinery Company, with Samuel L. Crockett, to help insulate Grand Rapids Machinery from Fox's lawsuit. Oliver merged the two companies in 1903 and the combined business was named Oliver Machinery. 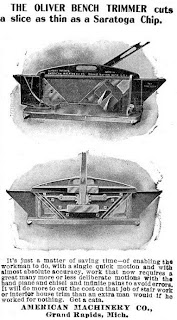 In the meantime, Fox had lost his lawsuit and Perkins, with the Oliver/Fox patent in his name, decided to re-enter the miter trimmer manufacturing business through his original Perkins and Company.
But we shall return to the miter trimmer imbroglio later. First, let’s look at Perkins’s attempts to design a typewriter than might have added to his one-upmanship against Fox. 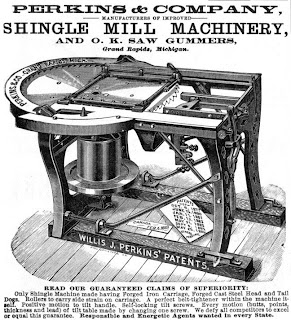 Willis Joseph Perkins was born in Lycoming County, Pennsylvania, on July 134, 1853. He lived most of his life in Grand Rapids, but toward the end of his days moved to warmer climes in New Port Richey, Florida. He died at Clearwater, Pinellas, Florida, on November 3, 1936, aged 84. His occupation was listed as “retired shingle manufacturer”. He was buried in St Petersburg. He had been married at least three times; his first wife, Frances, died. More importantly, in his own mind perhaps, he had outlived arch rival William R. Fox by three years. 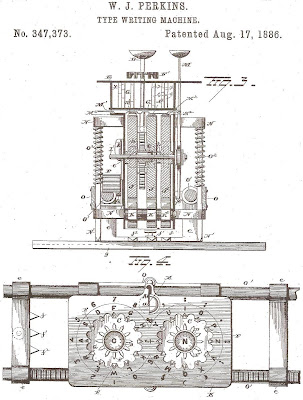 Perkins applied for three patents for typewriters, the first of them being issued on this day in 1886 (above and below). 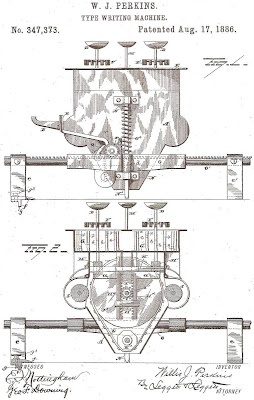 But at that stage Perkins's rivalry with Fox had only just begun.
Fox had not yet teamed up with Glenn J. Barrett to design the first of his Fox typewriters. Later, faced with Fox’s considerable challenge in this field, Perkins reacted by coming up with a far more ambitious design, for his second typewriter invention, in 1895 (at top of page and below): 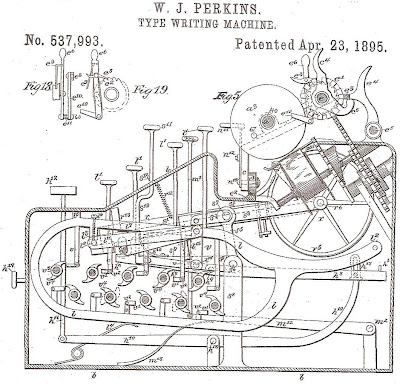 Perkins’s third typewriter patent, in 1897, was for mechanical improvements, which he assigned to Smith-Premier. He possibly figured that, since he could not get a typewriter produced in his own name, he may as well maintain the pressure on Fox through Smith-Premier.
Still, these three typewriter patents comprise a very small percentage of Perkins’s total haul from the US Patent Office. Between 1880 and 1931, it ran into dozens, mostly (22) for machines related to the timber milling industry. In later life, however, he also concerned himself with things ranging from automobile mufflers, clutches and gears, to electrics, sound detectors and recorders, to an airplane “landing and launching” device.

It would seem that for more than half a century, he was full of new ideas and constantly inventing. Predominantly, his incentive, from the mid-1880s to the turn of the century, was to better whatever Fox was working on.
As for Perkins’s first typewriter, he stated in his specifications he wanted to “dispense with the complicated and numerous parts now employed in the manufacture of type-writers. A further object is to provide a machine adapted to move over the material being printed upon, thereby enabling it to be employed in bookkeeping and for other purposes where it is impossible to employ the stationary type-writer. A further object is to provide a type-writer combining simplicity and economy in construction with durability and efficiency in use.”
OK, all very reasonable. But how about Perkins’s next typewriter: 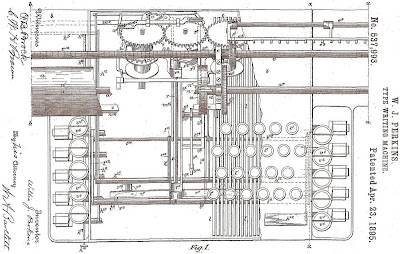 “The object of the invention is to increase the speed of typewriting machines, by making the forward movement of the paper practically continuous, dispensing with a return movement until an entire sheet is printed; also to make a printing mechanism by which the letters may be printed separately, or an entire word or part of a word be printed by a stroke of a single key; also to omit one part of a word, or to divide a word by the manipulation of a key; also to make the movement of the paper automatic and continuous from the beginning to the end of the printing of a sheet; also to furnish an improved paper attachment; also to secure an improved apparatus for return movement of paper and correction of errors; also to regulate the automatic spacing between letters, words, and lines, with improved facility, and to adjust said spacing; also to perfect and improve many of the details of typewriting machines …” 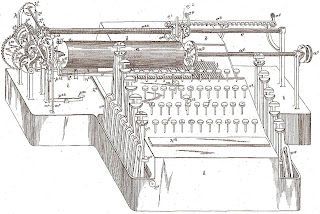 Whew! I ran out of breath just reading that! Sounds like he wanted to build some sort of super typewriter. Perhaps his ambitions in this case exceeded his capabilities, because, apart from his contact with Smith-Premier, Perkins does not appear to have taken his machines anywhere near production.
But, then, typewriters were far from the main thrust of his business activities. His interest in them, such as it was, had more to do with Fox’s success in the field than anything else. 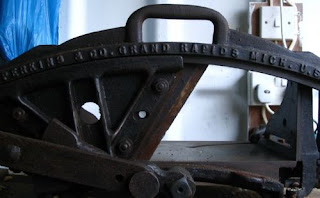 In the winter of 1873-74, Perkins and his father Harford Joseph Perkins - who had been postmaster at Cogan House, White Pine, Lycoming County, Pennsylvania, at the time Willis was born - jointly founded Perkins and Company to build woodworking machines. At the time Perkins’s father held one patent on a shingle machine. Willis very quickly expanded the company's patent inventory.
From 1000 square feet and just a father and son team in 1874, by 1888 the Perkins company had grown to take up 40,000 square feet of working space to 100 workers. 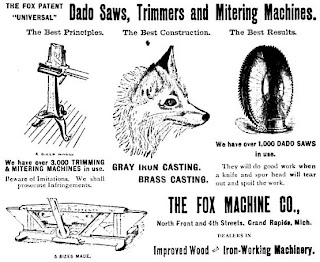 Meanwhile, across town, Fox had in 1885 started up a rival company. In 1879, while living in Middletown, Connecticut, Fox had patented what was arguably the first workable "universal" miter trimmer. The next year he moved to Grand Rapids, where he worked for Perkins.

After founding the Fox Machine Company, Fox continued to develop his trimmer. When he hired Joseph Oliver to help sell the trimmer, he had no idea what lay ahead. After their falling out, Oliver left to work on his own trimmer, and with this he went into business with Perkins. Naturally, Perkins saw in Oliver and Oliver’s trimmer an opportunity to hit back at Fox for leaving him and setting up a rival company. Perkins patented the Oliver trimmer in his own name 1891. 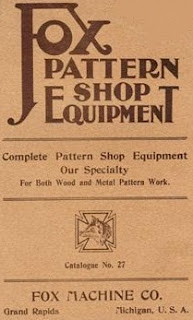 Fox reacted by looking to branch out in new directions. During all this time Glenn J. Barrett had been beavering away successfully with various adding and calculator machine designs in Grand Rapids. In 1894 Fox, who had thus far failed to design a typewriter of his own, recruited Barrett and the two began to work together on a typewriters. It may well be that Fox was aware Perkins had ambitions of his own in this direction.

From 1898 to 1907, Barrett and Fox jointly patented a number of improvements to their machine, which in 1902 had become the Fox typewriter. Barrett later went to work for the Union Typewriter Company and designed typewriters, as well as adding and calculator machines, for Remington, Smith-Premier and Burroughs.
Fox was, of course, quite successful with his typewriter venture. It could be argued that in today’s world, Fox typewriters are far better known than the miter trimmers that either he or Perkins produced. Nonetheless, miter trimmers were obviously very big business back then. 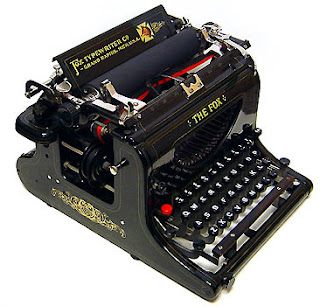 Fox No 23, Richard Polt Collection
Paul Lippman in American Typewriters (1991) tells us two distinct models of the Fox typewriter went into production during William Fox’s time with the company, an upstroke and a visible (in 1906). The latter went as high as a No 24 (or 25, Lippman suggests). Some were also marketed as the Rapid. The Fox company also made four portable models after Fox had left it.

Fox’s departure from the Grand Rapids company he had founded came at the end of a series of one-upmanship battles with Perkins and Oliver over miter trimmers. Each was trying to outdo the other with bigger, improved trimmers. Something had to give. Oliver could be said to have broken first, but in the end it was Fox who decided to cut his losses and bow out of the business completely. With his company going downhill, and the heat of the competition too great to handle, Fox packed it all in, to go elsewhere and try something almost completely different.

With the Fox factory “practically closed” (A Condensed History of the Writing Machine, 1923) at the outbreak of World War I, Fox’s fortunes had begun to plummet. By 1915 he had had enough.
Fox sold his Grand Rapid operations to a local consortium (headed by Earl Stokoe, Irving Frank and banker F.I. Chicester) and moved to Jackson, Michigan, to make drill presses and milling machines.
Both the Fox and Perkins Grand Rapids companies continued to manufacture trimmers, however. Fox sold the rights to his trimmers to Fay and Egan around 1916 and Perkins sold his trimmer rights to the American Wood Working Machinery Company of Rochester, New York.

Posted by Robert Messenger at 11:59

My gosh, who knew that the world of miter trimmers was so cutthroat!