Why Didn't I Think of That? Weird Ideas in Typewriter History (III)

UNHERALDED GENIUSES, REALLY SMART THINKERS, MISGUIDED IDEALISTS, CRAZY OPPORTUNISTS, OR JUST PLAIN SILLY PEOPLE WHO WASTED EVERYONE ELSE'S TIME?
This a monthly series devoted to typewriter-related ideas which finished up going absolutely nowhere (or at least they didn't go anywhere to the best of my knowledge. If anyone knows better, please enlighten me.)
No. 3 - THIS MONTH'S PRIZE WINNER IS:
FRANK BANGS POWERS
AND THE
SUPERSONIC TYPEWRITER SILENCER 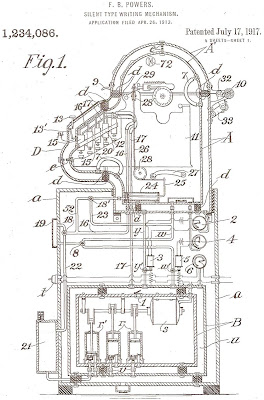 Talk about breaking a walnut with a sledgehammer. Frank Bangs Powers of Springfield, Massachusetts, showing all the intellect of another Springfield (though not Massachusetts) resident, in 1913 decided to attack the problem of typewriter noise.
As Frank quite rightly pointed out, the clickety-clacking of a typewriter can have an effect on the nervous system. I would have thought in a soothing way, but Frank obviously had a contrary view. 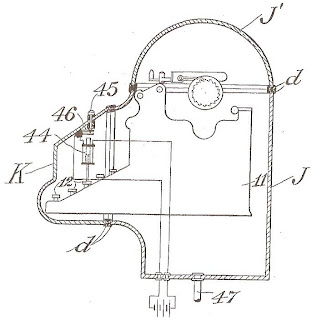 In the specifications for his patent for a “Silent Type-Writing Mechanism”, issued on July 17, 1917, after an unnecessarily unnerving wait of more than four years, Frank quickly established his objectives:
“This invention relates to an apparatus combined with a typewriter in such a way that the typewriter is rendered noiseless wherever used in connection with the apparatus.
“One of the essential features of the invention consists in a noise-deadening apparatus, in which apparatus a typewriter is placed and operated in a convenient manner [?], with the result that the noise from the typewriter is eliminated.
“It is well known that many classes of machines or operating mechanisms, while working, create an amount of noise which is not only bothersome to those unaccustomed to the same, but cause a distinct loss of efficiency in those who are not consciously bothered because accustomed to such noise.
“This loss of efficiency is due to the known fact that a constant occurrence of noise from any source has a distinct action on the nervous system.” 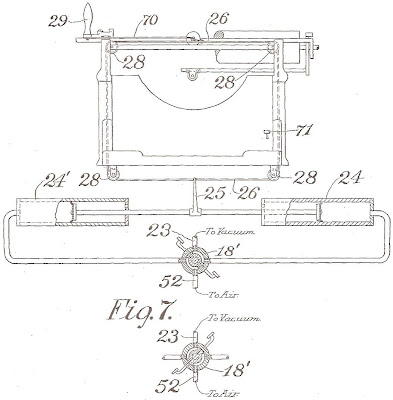 All very well, Frank, but don’t you think this apparatus of yours is going just a tad overboard? Imagine a typing pool full of these? There’d be no room left for anyone to type …
Frank Bangs Powers, the eldest son of paper manufacturer Lewis J. and his wife Martha Bangs Powers, was born June 11, 1858. His father (below) was mayor of Springfield in 1879-1880. 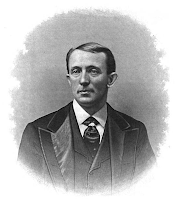 Frank was educated in private schools in Springfield, Massachusetts, and Hartford, Connecticut, and spent one year in the Springfield High School. Developing unusual musical talent, he was sent abroad for three years to study under music masters in Leipzig, Germany. The ill health of his father recalled him to the United States and Frank gave up his musical ambitions to become associated with the Powers Paper Company as vice-president and consulting engineer.
He displayed “an inventive genius” and invented mechanical devices used in the making of envelopes as well as other machines. “In fact,” says his biography, “the machinery used in the plant of the company at Brightwood may be said to bear the imprint of his genius. He is constantly seeking to invent new machinery and bring about a revolution in manufacturing certain lines in which the Powers Paper Company is interested.”
Frank Bangs Powers certainly had revolution in mind with his typewriter silencer. I wonder why it didn’t take off?
Can you find the typewriter in this little lot? 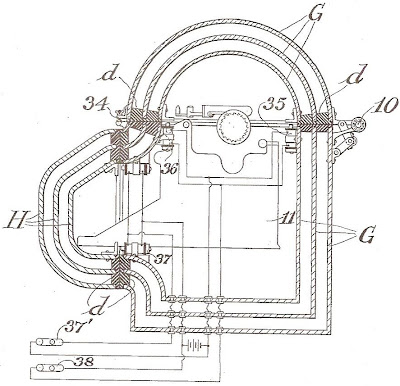 Posted by Robert Messenger at 10:26

I'm confused by this one. How does the typist reach the keys? I guess if you can't use it, the typewriter is silenced...

Couldn't agree more, notagain. I don't think you'd be able to find the typewriter in amongst all this junk.

Truly insane. Just the sort of thing I love in typewriter history!