On This Day in Typewriter History (XCVII) 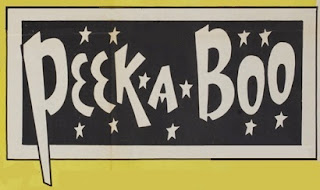 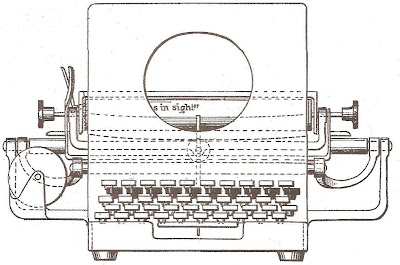 For someone who was issued with 29 typewriter-related patents during a 31–year period between 1897 and 1928, Frederick Whittlesey Hillard didn’t have a lot to show for all his efforts. It’s hardly surprising, then, that despite all his patents, Hillard is not mentioned in any typewriter histories.
Hillard’s sister, Mary Robbins Hillard, of Middlebury, Connecticut, to whom Frederic assigned three patents between 1915 and 1921, did nonetheless donate Frederic’s papers to the Connecticut Historical Society, where they are still held. Some 150 of his letters relating to his patents for typewriters and typewriters parts, covering 1902-1931, now rest in Hillard’s birthplace of Hartford. Frederic, who was born there on December 19, 1857, died on August 5, 1933, in Plymouth, Connecticut.
But for a newspaper snippet which appears in Mike Brown’s book on another typewriter inventor, John Newton Williams, we might not have known about one notable Hillard legacy. 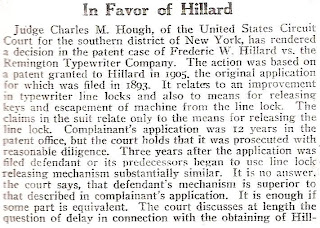 In 1909, Hillard, at least temporarily, had successfully sued Remington for patent infringement.
The interesting thing about this case is its reference to the lengthy time between Hillard applying for typewriter patents and being issued with them. In this particular case, relating to a line lock release, Hillard had applied for the patent in 1893 but it wasn’t issued for a staggering 12 years, until 1905. Nonetheless, Federal Judge Charles Merrill Hough found in Hillard’s favour on the basis that he said Hillard had “prosecuted [the patent] with reasonable diligence”!
Throughout Hillard’s 29-year, 29-patent typewriter inventing career, from 1893 to 1922, this extended delay between patent application and issuance is a common and inexplicable theme which stands Hillard well apart from other typewriter inventors. Was it a question of money being in short or stuttering supply? Why did he assign three patents to his sister? On a loan basis, one wonders? 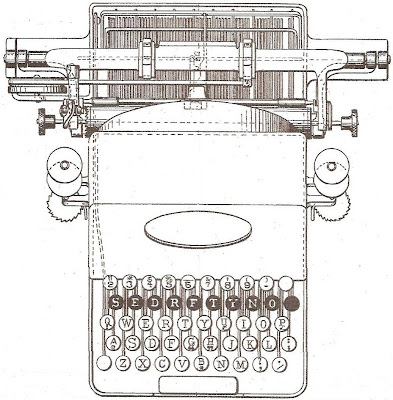 With the “peek-a-book” typewriter (above) we are looking at today, there is an 18-year gap between first applications and final issuance.
In Hillard’s suit against Remington (or what the court described as its “predecessors”, Wyckoff, Seamans and Benedict), it was stated that Remington had started to use a line lock release mechanism three years after Hillard had applied for his patent (that is, in 1896). The Remington mechanism was said to be “substantially similar” yet “superior”. 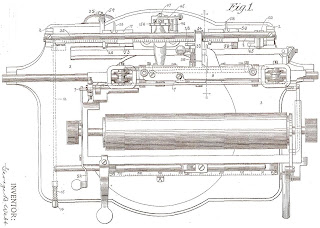 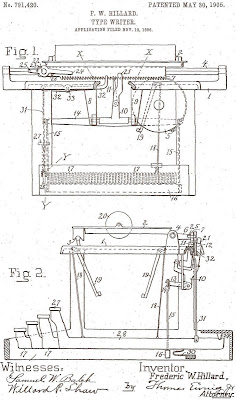 Hillard
But Judge Hough found it was “enough if some part is equivalent”.
The “superior” mechanism was covered in patents first applied for in February 1897 and issued a year later to George Boardman Webb and assigned to Wyckoff, Seamans and Benedict.

Hillard's "inferior" mechanism
Apparently the court discussed “at length the question of delay in connection with the obtaining of Hillard’s patents”, but sadly the snippet in Mike Brown’s book cuts out at that point I can relate no further.
I suspect, however, that in 1911 Judge Hough’s decision was reversed. In a Circuit Court of Appeals case heard on March 13, 1911, it was considered whether Hillard’s patent (No 791,420) had indeed been infringed by Webb’s later designs. 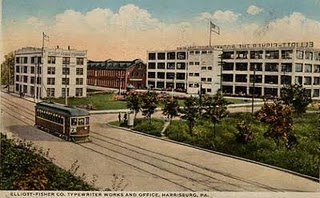 The year before Hillard’s first hearing in his case against Remington, Hillard was also involved in a patent infringement case against the Fisher Book Typewriter Company in the Federal Supreme Court. In 1908 Fisher issued a petition for a writ of certiorari to the United States Circuit Court of Appeals, which was denied. A writ of certiorari means an order by a higher court directing a lower court to send the record in a given case for review. 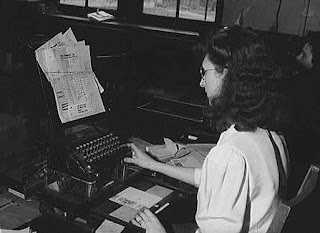 This case ended Hillard’s association with the Elliott book typewriter, which had extended to three patents for a table for the typewriter. 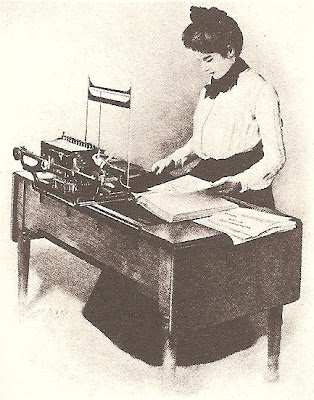 In all, 12 of Hillard’s 29 patents were related to the Elliott book typewriter. 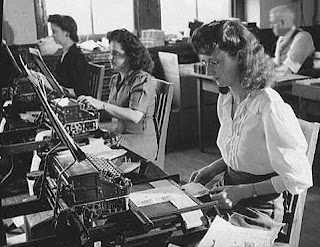 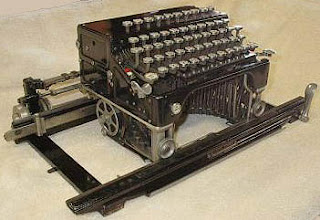 Hillard began working with Walter Platt Hatch in the late 1890s when the assignee was known as the Elliott and Hatch Book Typewriter Company of New York (1898-1902). 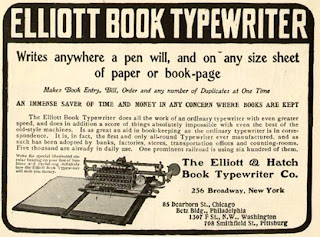 Hatch had jointly developed the book typewriter with George Crawford Elliott. Hillard continued to work on improvements for this machine when the assignee became known as the Elliott-Fisher Company of New York, incorporated in Delaware.

The change of company name occurred with Robert Joseph Fisher’s involvement in 1903. Later Underwood bought out the concern, so the cumbersome machine became the Underwood-Elliott-Fisher: 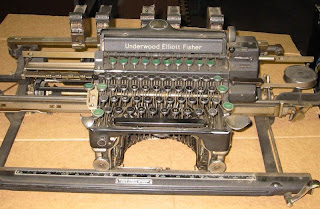 From 1907-1922, Hillard continued to design typewriters and typewriter components, but independently, while living in Tottenville, New York. He had started his typewriter design career in Newark in 1891. 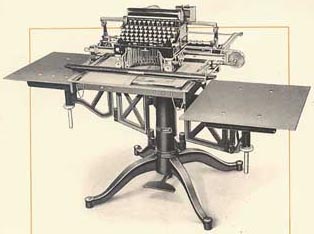 In a Yale University handbook of 1914, he was described as an 1887 graduate who was working at 287 Broadway, New York, in manufacturing. Hillard and his wife Mary Cole Hillard and their family (who included a son called Brewster) also lived at Richmond, New York, for a number of years. 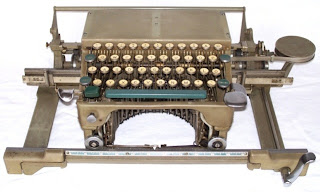 In 1920-1921, Hillard also patented typewriter designs in Canada and Britain (in Britain, his patents related to ball bearings for carriages).
Finally we come to the peek-a-boo typewriter. It was on this day in 1896 that Hillard first applied for patents for this machine – four separate patents were to emerge from the original design during the ensuing 19 years, until 1915.
Apart from this typewriter, envisaged in whole by Hillard, almost all of his other patents were for typewriter parts, which ranged from ribbons to paper clamps, mostly related to carriage movements, but also from a very early concept for a multiple spacing key (below) to an idea on improving the post-Wagner Underwood’s visibility. 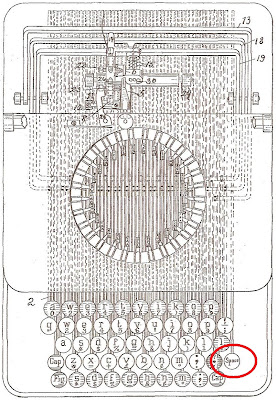 I have run this peek-a-boo concept past Richard Polt, and he says he finds it as baffling as I do. Best that I simply let Hillard himself try to describe it: 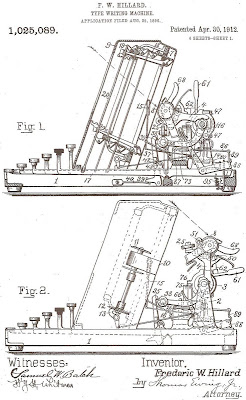 “[The primary aim [is] to produce a typewriter with the double advantage of printing in sight and with a whole type ring or ample room in which to pivot the type bars. 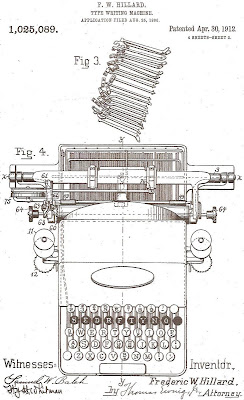 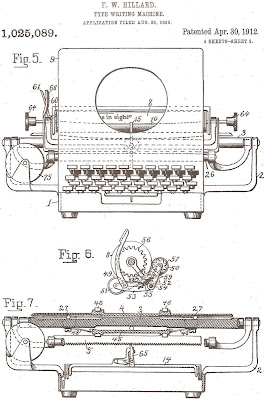 "My invention combines the advantages of each of the two classes without their disadvantages.”
Let me know if you can work it out: 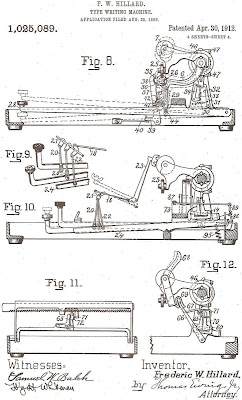 English author Frederick Forsyth was born in Ashford, Kent, on this day in 1938. He turns 73 today. He is best known for thrillers such as The Day of the Jackal, The Odessa File, The Fourth Protocol and The Dogs of War. A much younger Forsyth is seen here using an Empire Aristocrat. 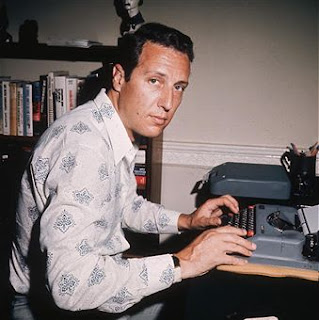 Another British novelist, Martin Louis Amis, was born in Swansea, Wales, on this day in 1949. He turns 62 today. Amis is seen here using an Olivetti Lettera 32. 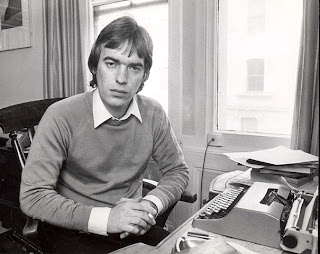 Posted by Robert Messenger at 09:57

Instead of putting the circular type basket underneath the platen as in a typical blind writer, Hillard would place his circle of typebars between the typist and the platen. A shield hides the typebar mechanism from the typist. You peek through the hole in the middle of the shield, a hole that is surrounded by typebars, to see what you're writing.

Thank goodness for that! As they say in My Fair Typewriter, "By George, I think you've got it!" Thank you Richard, it all becomes as clear now.

Awful confession to make: the Peek a Boo artwork is reworked from a 1940s burlesque show poster. Shame on me!