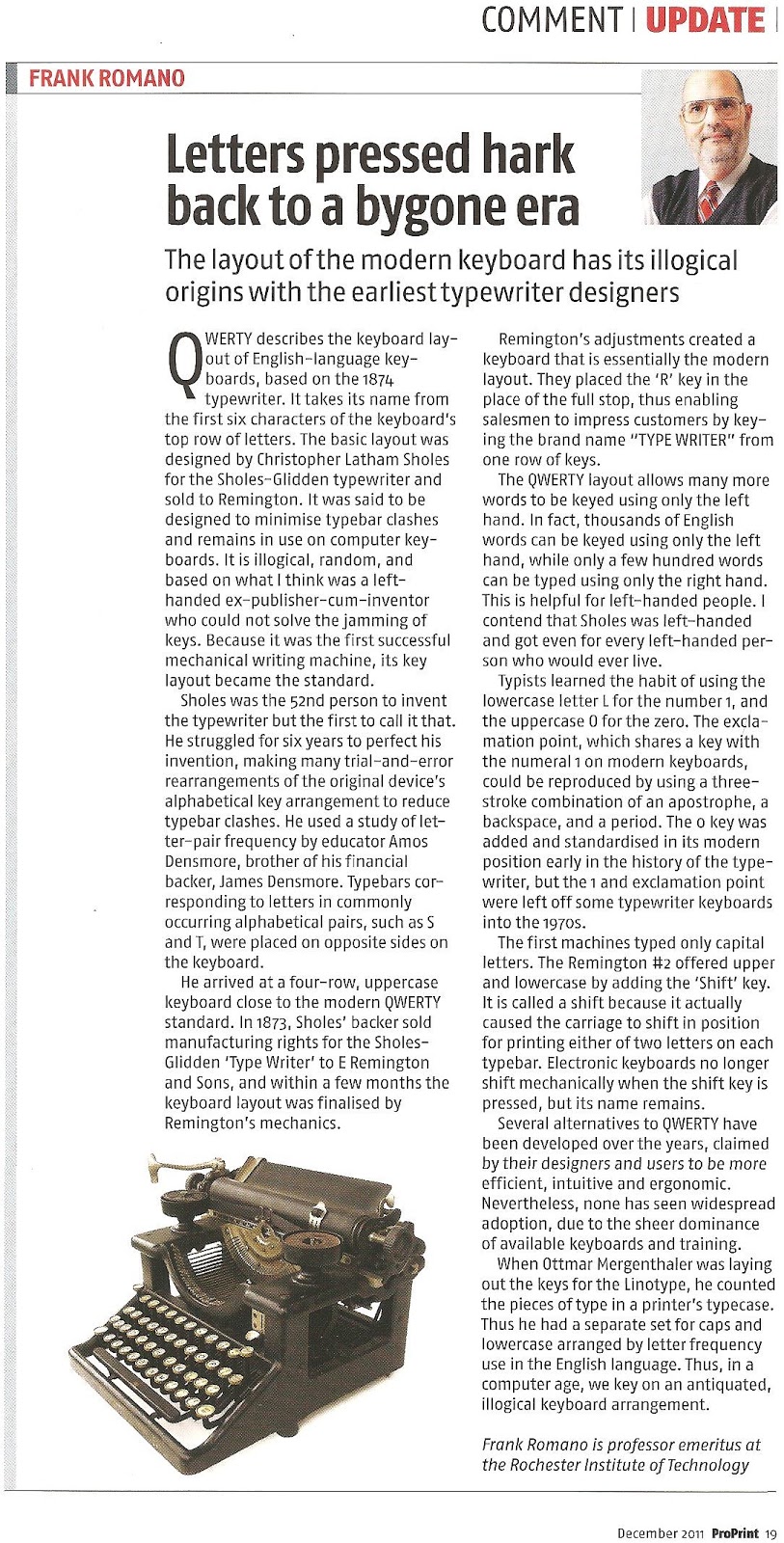 A comment piece in this month’s issue of Australian magazine ProPrint, from Rochester Institute of Technology emeritus professor Frank Romano*, makes interesting reading – to a certain degree.
Interesting, in parts, but I doubt it is entirely factual. For example: Amos Densmore an educator? I don’t think so. He was in the oil transportation business, the typewriter business and at a stretch might be described as an "inventor". But educator? No!
And as for “the keyboard layout was finalised by Remington’s mechanics”, this was actually done in Milwaukee in 1872, before the Sholes & Glidden ever reached Remington in Ilion, New York.
Maybe Frank should have consulted Koichi Yasuoka, or even a few posts on this blog.
The notion that Amos Densmore was an “educator” appears to have gained some currency from a Darryl Rehr site headed “Consider QWERTY ... the typewriter keyboard ... the Universal User Interface ...” at http://home.earthlink.net/~dcrehr/whyqwert.html
This site says, “He [Christopher Latham Sholes] did this using a study of letter-pair frequency prepared by educator Amos Densmore, brother of James Densmore, who was Sholes' chief financial backer.”
These are almost the exact same words used by Romano in this comment piece.
They were also used on the site “Primary Inventors of the Qwerty Keyboard” by Ashley Seehorn, eHow contributor, at http://www.ehow.com/list_7437785_primary-inventors-qwerty-keyboard.html#ixzz1gr8nNGni
There it says of Amos Densmore that he “was the educator who helped Sholes develop the layout for the Qwerty keyboard. Amos Densmore did a study of letter-pair frequency in typing. Sholes used this study to develop a keyboard that would reduce jamming by placing letters that frequently followed one another at a safe distance from each other.”
It’s a funny thing with me, but once I read a line like that in someone’s comment piece, I tend not to proceed. One glaring error is enough. I mean, what else on the piece can one trust?
In January this year, Koichi Yasuoka posted a rather amusing addendum to his “The Truth of QWERTY” pages, in which he quoted from G. Tilghman Richards’ The History and Development of Typewriters (1938): “[James] Densmore and Sholes conceived the idea of arranging the keyboard so that the letters which most frequently occurred together were placed as far as possible apart in the typebasket. Amos Densmore asked his son-in-law, who was at the time superintendent of schools in Western Pennsylvania, to make a list of the frequency of juxtaposition with which the letters in written English occurred, and this list formed the basis on which the ‘Universal’ keyboard was ultimately arranged.”
Yasuoka responded, “Amos Densmore had no son-in-law in 1873. His oldest daughter, Miss Blanche Densmore, married Charles Alphonso Curtis in Meadville, Pennsylvania, on January 7, 1875. His brother, James Densmore, had no son-in-law at that time either.” 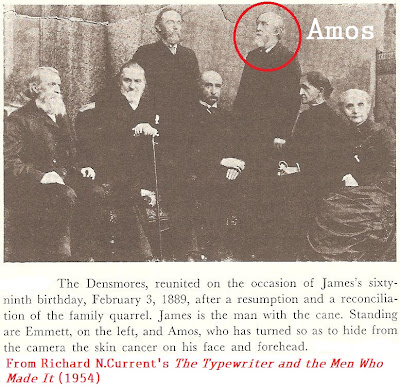 Let’s briefly run over what we do know about Amos Densmore. He was born in Rochester, New York on January 28, 1825, the son of Joel Densmore, a soldier in the war of 1812. Amos was educated in the public schools and at Allegheny College, Meadville, Pennsylvania. For a time he assisted his father in operating a sawmill and wooden bowl factory. In 1848, Amos married Priscilla, daughter of Hugh Compton.
From 1861 until 1867 he worked in the oil production and transportation businesses near Meadville with his brother James.
Teamsters originally hauled barrels of oil from the well site to the railroad yard, where the barrels were stacked on flatcars for transport. Unfortunately, the traditional wooden barrels were unreliable and leaky, and the constant motion of railway transportation only intensified the problem.
In 1865, Amos and James designed a more cost-effective way to transport oil by rail. The brothers invented and built the Densmore Tank Car, a specialty railroad car that could haul 80-90 barrels (nearly 3400 gallons) of oil. They used a flat train car and affixed two vertical 40-45 barrel tanks made of pine planks banded with iron. The first successful test of the Densmore Tank Car was in September, 1865. The car ran successfully on a line from Miller Farm along Oil Creek (south of Titusville, Pennsylvania) to New York, with no oil loss. On April 10, 1866, the Densmore brothers were issued a US patent for the tank car.
The success of the Densmore Tank Car revolutionised the transportation of oil by railway. Improvements included metal construction, a single-tank design and expansion domes that prevented leakage.
From 1867, the Densmore brothers (including Emmett) became involved in the Sholes & Glidden typewriter project. In 1875, Amos sold his interest in the machine to George Washington Newton Yost for $50,000. (He did not sell it to James, who already had a two-fifths share; Amos had held one-fifth and Yost had the remaining two-fifths. With money borrowed from Remington and Amos’s share, Yost took a controlling interest). Amos and Emmett, along with Walter Jay Barron and Franz Xaver Wagner, devoted their attention to the Densmore typewriter. Amos died of facial skin cancer in New York City on October 14, 1898.
*RIT's blurb says: "Frank Romano's career has spanned 50 years in the printing and publishing industries. Many know him as the editor of the International Paper Pocket Pal, or have read one of the thousands of articles he has written. He is the author of 45 books, including the 10,000-term Encyclopedia of Graphic Communications (with Richard Romano), the standard reference in the field. He lectures extensively and was the principal researcher on the landmark EDSF study, Printing in the Age of the Web and Beyond. He has been quoted in many newspapers and publications, as well as on TV and radio."

Posted by Robert Messenger at 16:33

Very interesting. The QWERTY discussion will probably be going on for years to come. I just wonder why the computer industry did not make a more practical KB. I actually changed some of mine to Dvorak and really liked it after I taught myself to use it. Since it was to no advantage since I need to use several different machines I reverted back to QWERTY.