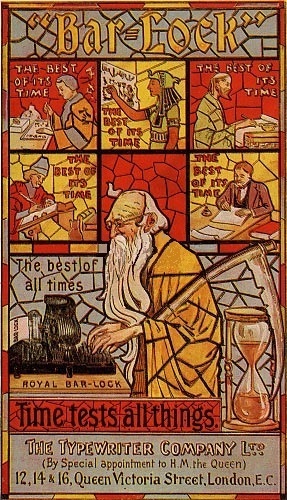 Followers of this blog will know how much I love unearthing the people behind the typewriters.  I am almost as excited about finding one of the artists involved in the finest series of typewriter posters in history: those for the Columbia and Royal Bar-Lock typewriters. 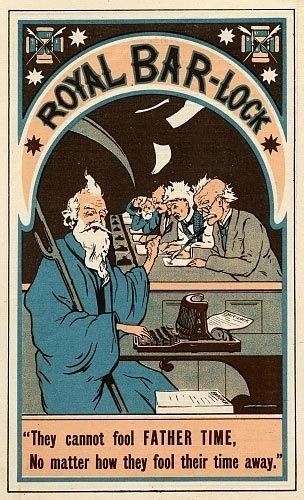 Richard Polt once described the Bar-Lock posters as, “Beautiful. Bar-Lock ads had a real sense of turn-of-the-century style.”
I was so taken by the collection of Columbia and Royal Bar-Lock posters I devoted my 2011 typewriter calendar to them.
It turns out the brilliant British Vorticist artist William Roberts (1895-1980) had a part to play in creating the posters. 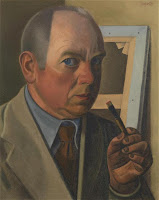 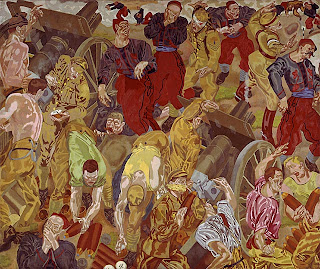 The First German Gas Attack at Ypres, 1918
Born in Hackney, London, Roberts took up an seven-year apprenticeship as a poster designer with the advertising firm of Sir Joseph Causton Ltd in 1909. 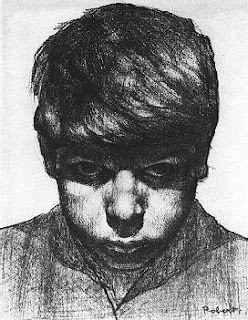 Self-portrait, 1909
Causton, whose offices were in Eastcheap, near the Billingsgate fish market, had the contract to produce the Royal Bar-Lock typewriter posters.
Roberts recalled that Causton's firm employed 12 commercial artists, “who specialised in various types of work; some did only large-lettered advertisements, others were expert in small lettering suitable for showcards.” 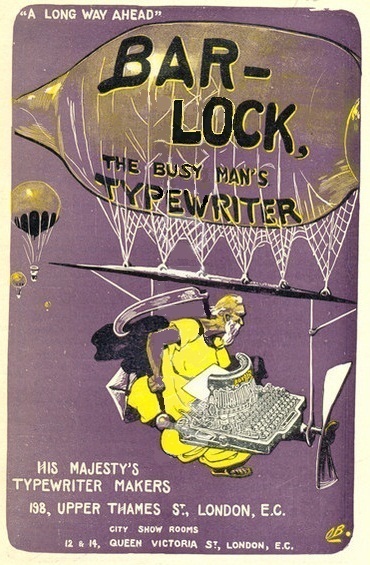 Roberts, almost 70 years after the event, said he still remembered being allowed to work on “an advertisement for typewriters. It showed a figure of Father Time, complete with scythe and hour-glass, standing behind a [Bar—Lock] typewriter …” 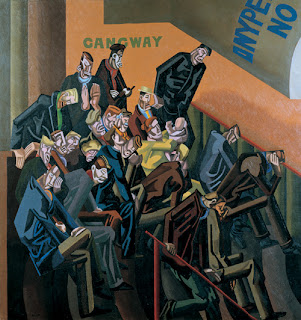 At the Hippodrome (The Gods), 1921
Before a Roberts exhibition in 2007, Mark Hudson wrote in the London Telegraph, “Imagine that Picasso had been British and hung around amateur football matches, or that the great modernist Fernand Léger had been addicted to dog tracks and travelling on London Routemaster buses, and you've got something of the flavour of the art of William Roberts. 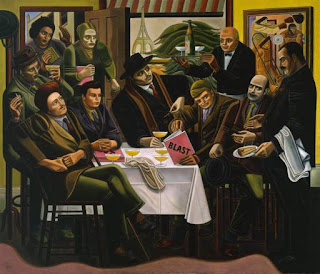 Vorticists, 1915: Seated left to right, Cuthbert Hamilton, Ezra Pound, William Roberts, Wyndham Lewis, Frederick Etchells and Edward Wadsworth. Standing in the doorway are Jessica Dismorr and Helen Saunders.
“A prodigiously gifted draughtsman, born in 1895 into a working-class London background, Roberts was one of the oddest characters ever to emerge from the British art scene – a man who enjoyed an unprecedentedly glittering start to his career, then barely spoke to anyone for nearly 50 years.
“Roberts created astonishingly vivid and distinctive images of 20th-century Britain at play – images that are at once inescapably modernist and as peculiarly and idiosyncratically English as a John Betjeman poem]." 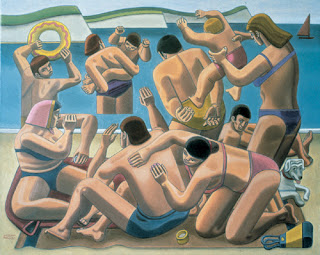 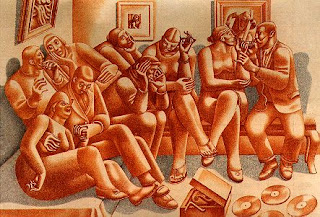 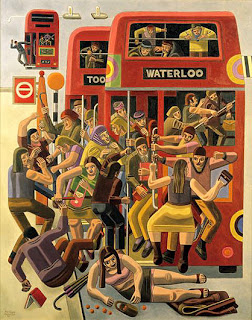 An impressive artist, and I had never heard of him, I'm afraid.

Thank you, Robert, for calling my attention to Wm. Roberts, who is new to me. What a fantastic artist!

It’s my first time seeing these vintage typewriter posters and they’re so cool! How were you able to get these copies?