Hunter S on a Nakajima Typewriter? A Rum Idea! 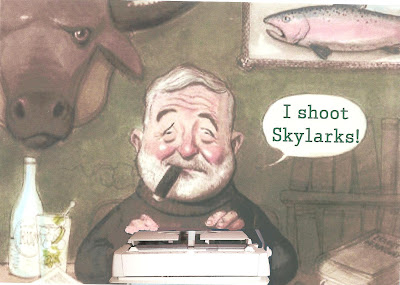 A month or so ago, somebody listed a Royal Skylark portable typewriter for sale on US eBay. In the listing description, the seller suggested this was the sort of Royal typewriter which would have been used by Ernest Hemingway. Hemingway with a plastic portable!? I don't think so.
But talking about shooting typewriters ... 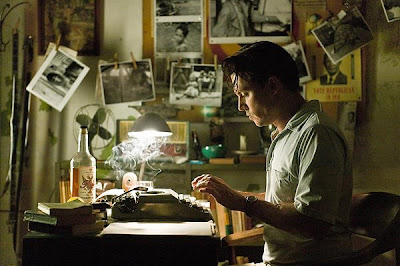 Just as ridiculous a concept is the typewriter which is seen being used by Johnny Depp playing the Hunter S.Thompson (Paul Kemp) character in the latest movie adaptation of a Thompson novel, The Rum Diary ("One part outrage. One part justice. Three parts rum. Mix well"). 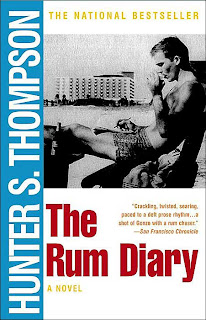 The Rum Diary premiered in Los Angeles on October 13.
I haven't seen the movie yet, but stills from it clearly show the typewriter being used by Depp as Thompson-Kemp is a Nakajima. The film is apparently set in Puerto Rico in the 1950s, long before Nakajima typewriters were first made. Whether Thompson would have found one in the US, or Puerto Rico, even when they were made, is questionable. 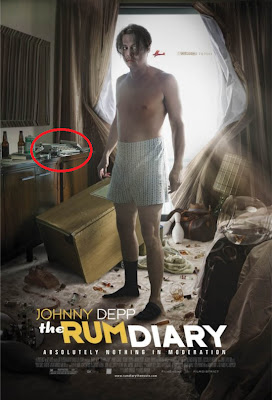 It's a pretty cheap and nasty deception, I would suggest. Could the studio not afford something more akin to what Thompson would actually have used? In Fear and Loathing in La Vegas, the producers at least found a red IBM Selectric for Depp to carry, for the sake of absolute authenticity.(The Rum Diary was made by Depp's own production company, Infinitum Nihil). 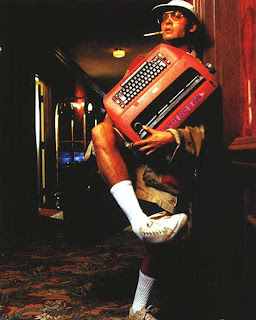 Wikipedia tell us, "In 1960 Thompson moved to San Juan, Puerto Rico, to take a job with the sporting magazine El Sportivo, which folded soon after his arrival. Thompson applied for a job with the Puerto Rico English-language daily The San Juan Star,  but its managing editor, future novelist William J. Kennedy,  turned him down. Nonetheless, the two became friends and after the demise of El Sportivo, Thompson worked as a stringer for the New York Herald Tribune and a few stateside papers on Caribbean issues with Kennedy working as his editor."
Thompson worked in Big Sur immediately after Puerto Rico. The photographs taken at Big Sur of Thompson and his typewriter show he was using what I am pretty sure is an Olympic SF portable. 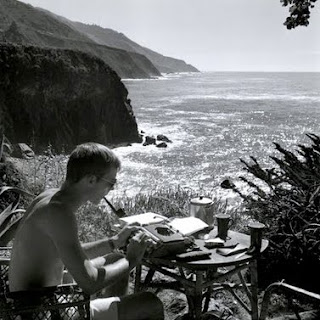 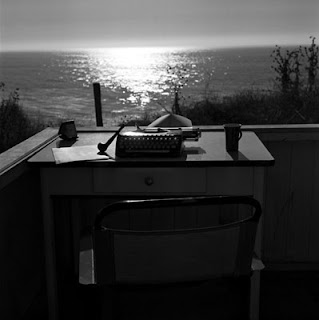 In The Rum Diary, Depp plays "American journalist Paul Kemp [who] takes on a freelance job in Puerto Rico for a local newspaper during the 1950s and struggles to find a balance between island culture and the expatriates who live there." "[He] finds himself at a critical turning point in his life while writing for a run-down newspaper in the Caribbean. Paul is challenged on many levels as he tries to carve out a more secure niche for himself amidst a group of lost souls all bent on self-destruction."
Lost souls? Self-destruction? OK, but that still doesn't justify a Nakajima! 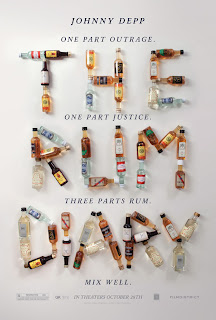 Posted by Robert Messenger at 10:57

Thanks for the interesting post. It is good to know someone else can point out inaccuracies in the movies. I do it frequently with radio and fire fighter things. I do have a Nakajima typewriter and really like it surprisingly since it is a Japanese mostly plastic case typer. It was made for Olympia. A model B12.

This post highlights a pet peeve of mine: That a film costing millions upon millions of dollars would not exercise total AUTHENTICITY in each and every prop!

It doesn't require a rocket scientist to match an appropriate typewriter to the period.

btw: Kudos to your site, I like it very much!

Hi Fabian. Thanks. Yes, it's most definitely a Nakajima. Litton Industries owned Royal and at the time had its machines (also including Imperials) made by Nakajima. Many thousands of these are in existence, and that is just in Australia alone! The exact same machines from Nakajima are readily available in many dozens of other brand or model names. It's quite possibly the world's most common typewriter.

Hi Fabian. In hindsight, I probably should have explained that the manufacturer is Nakajima. Since there are as many as 30 or 40 different brand and model names attached to these same-design typewriters, we tend not to identify them by those brand or model names, but simply as Nakajimas. There isn't much point in trying to separate them by brand or model name, as they all are the same typewriter. Herce they are grouped together as Nakajimas, not Royals, Imperials, Majestics, AusRoyals, ALLs, KMarts etc etc etc - you name it, Nakajima made it.

Let me start by saying I am a huge HST fanboy, he is a constant source of inspiration for me and my lifestyle and writing process mirrors his to a fulfilling degree (not out of emulation, but out of a mutual proclivity toward the altering of one's consciousness (as mankind has be doing globally since we found out how), subverting the designs and standards of the ruling class and generally living life to the fullest (or as Hunter put it, "Life should not be a journey to the grave with the intention of arriving safely in a pretty and well preserved body, but rather to skid in broadside in a cloud of smoke, thoroughly used up, totally worn out, and loudly proclaiming 'Wow! What a Ride!'")).
My point is, I am not against Hunter S. Thompson, Johnny Depp or hell even against typewriters (I stumbled upon this article trying to find the exact model HST used so I could be inspired by the very thing with which I was writing, in the same way HST typed the works of writers he admired to understand the way they wrote and internalize it into his own style), however I fail to see how the proper brand of typewriter could be such a detrimental flaw of a film based on a (albeit early) work of Thompson. Thompson saw impressions as more important than facts and laughed in the fact of objectivity in journalism (as the man himself said "So much for Objective Journalism. Don't bother to look for it here--not under any byline of mine; or anyone else I can think of. With the possible exception of things like box scores, race results, and stock market tabulations, there is no such thing as Objective Journalism. The phrase itself is a pompous contradiction in terms."). Part of me wants to take @Cameron 's comment as sarcasm, as yes it is a huge film project involving hundreds of people and millions of dollars to make the film both appreciated by the serious fan but also able to clear the box office quota necessary to consider it a successful movie. However, this goal was failed by over $20,000,000. So yes, they could've gone more authentic and concentrated more effort onto procuring the correct typewriter, or at least focused on production enough to make it a financially and culturally worthwhile film, but they took the middle of the road, haggling between the inwards and chaotically driven fans of Hunter S. Thompson and the frenzied and zeitgeist defining masses of the age.
So ask yourself, does it matter? Because Thompson himself would have simply dismissed it as a half-assed product of its age and moved on. Because the details don't really matter, just as the individual words or sentences in any given writing do not matter; the real integrity and worth of any given project is not measured by eloquence or accuracy, it is measured by the impression it gives, the transcendental truth it carries about society, life and the rules of the universe. Each utterance we give as individuals or as a culture or as a species in the end are negligible, because the universe is a dark and stormy place which does not care in the least bit about us. When we speak, we act as though we are shouting into the void but in reality we intend to be heard by our fellow humans and interpreted against the great and unforgiving cosmos in which we live. Yes, the typewriter may be wrong, but does it matter? In a ~43 million dollar budget wouldn't there be bigger fish to fry than insuring the accuracy of the typewriter, which the majority of the viewers wouldn't notice?
At the very least, if none of these explanations please you, consider it a tip of the hat toward HST's habit of avoiding the expectations of readers.