It's coming up to eight years since Australia's Reserve Bank set out to create a "New Generation" of bank notes, with a plan to launch the more "youthful" and "energetic"-looking notes in 2010. Even by September 2012, however, the cost of this project had reached $9.3 million, and as of today there is still no definite date for the release of the Garry Emery-designed range of notes. 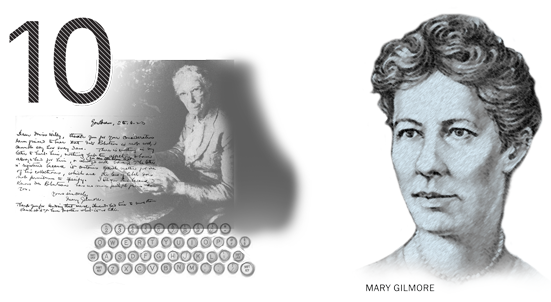 The original "new" design
Typewriter-related images have appeared on many stamps in the past, but this may be only the second time they have appeared on bank notes. Assassinated Filipino senator Benigno "Ninoy" Aquino's Smith-Corona Skyriter portable typewriter appeared on a Philippines 500 peso note in 2009. Apparently the typewriter has on its top Aquino's initials "BSAJ" (Benigno Simeon Aquino Junior):

Writers Mary Gilmore and Banjo Patterson will remain on either side of the new Australian $10 note, but Emery's "more vibrant and up-to-date" design for the "reverse" side will feature a QWERTY keyboard and a typewritten snippet from Gilmore's 1911 poignant poem about the great Henry Lawson, "Ghost Haunted Through the Street He Goes" (slightly revised 1952). 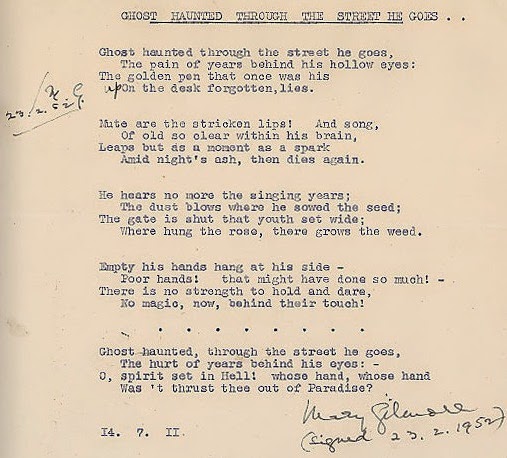 Many examples of Mary Gilmore's typewriting can be seen here.
In a 1952 letter, Gilmore said the poem "derives from a sight of Lawson, hobbling in partial paralysis on a stick, going to the Bulletin office, where, because he was no longer on top of the wave, he was treated with rudeness and contempt, as a nuisance. (He told me this, bitter and sad)." 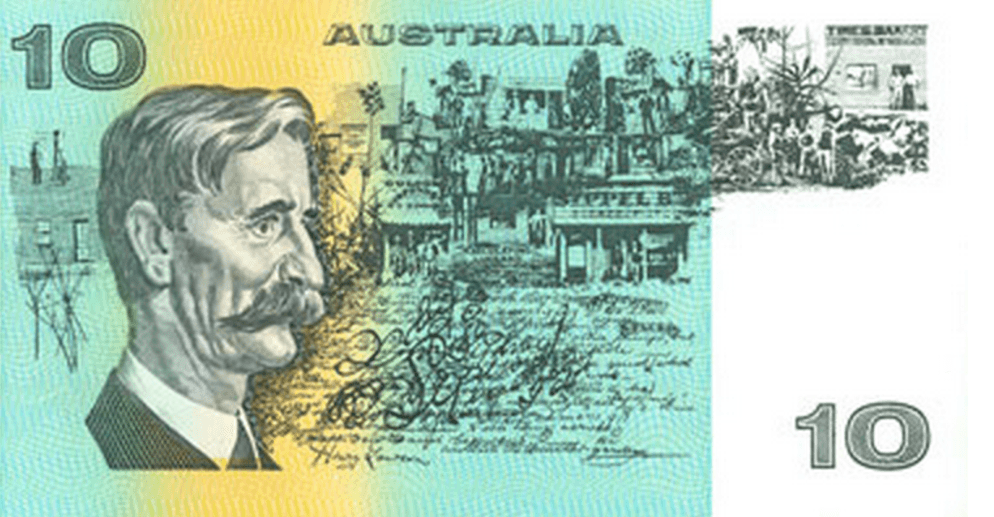 Lawson on the original decimal currency Australian $10 note
Lawson's entry in the Australian Dictionary of Biography states that from 1907 he "became a frail, haunted and pathetic figure well known on the streets of Sydney; in his writing, images of ghostliness proliferated and increasingly a sense of insubstantiality blurred action and characters. Loyal friends arranged spells at Mallacoota, Victoria ... in 1910 and at Leeton in 1916. But his state of mind, physical condition and alcoholism continued to worsen. The Commonwealth Literary Fund granted him £1 a week pension from May 1920. He died of cerebral haemorrhage at Abbotsford on 2 September 1922."

Lawson was on the "reverse" side of the original 1966 Francis Greenway-designed $10 paper note (decimal currency was introduced that year). Gilmore and Patterson came on to the "tenner" (above) when polymer notes were introduced in 1993. On this, the reverse side illustration was inspired by Gilmore's stirring patriotic World War II poem "No Foe Shall Gather Our Harvest" and, as part of the copy-protection microprint, the text of the poem itself.

Banjo Patterson on the "obverse" side of the "New Generation" $10 note
The QWERTY keyboard on the Gilmore side of the new note represents Gilmore's L.C.Smith standard typewriter, which is in the National Museum of Australia in Canberra: 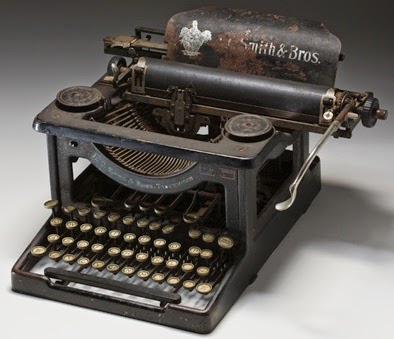 The Reserve Bank says the new release is aimed to ensure Australia maintains its "relatively low levels of counterfeiting". "Mindful of the increasing threat posed by counterfeiters – particularly to bank notes printed on polymer – the bank has for a number of years been undertaking research into new anti-counterfeiting technologies." There had been a spike in the number of counterfeit bank notes circulating in Australia. In 2012 there were 1.3 billion bank notes in circulation, worth a total of $61 billion. A parliamentary committee in Sydney was told that the number of counterfeit notes detected in 2011 was 18,000, up from about 8500 in 2007. The rate is relatively low by international standards, but the bank noticed more sophistication in the counterfeiting. 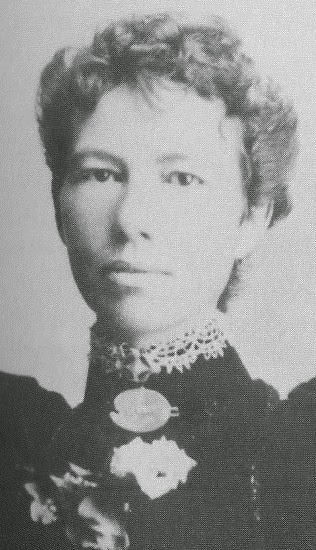 In its latest report, the bank says, "The typewritten verse of poet and journalist Dame Mary Gilmore (above) brings a haunting sense of authenticity to [the] design for the tenner."
Quite apart from the fear of counterfeiters, the bank's research showed Australians couldn’t identify the faces on their bank notes.
Patriot, feminist, social crusader and folklorist Dame Mary Gilmore was a prominent Australian poet and journalist. She was born Mary Jean Cameron on August 16, 1865, at Mary Vale, Woodhouselee, near Goulburn, north of Canberra. When she was one her parents moved to Wagga Wagga, where she started teaching at the end of 1885. She later taught at Silverton near the mining town of Broken Hill. There Gilmore developed her socialist views and began writing poetry. In 1890, she moved to Sydney, where she became part of the "Bulletin school" of radical writers. The greatest influence on her work was Lawson, to whom she was unofficially engaged. 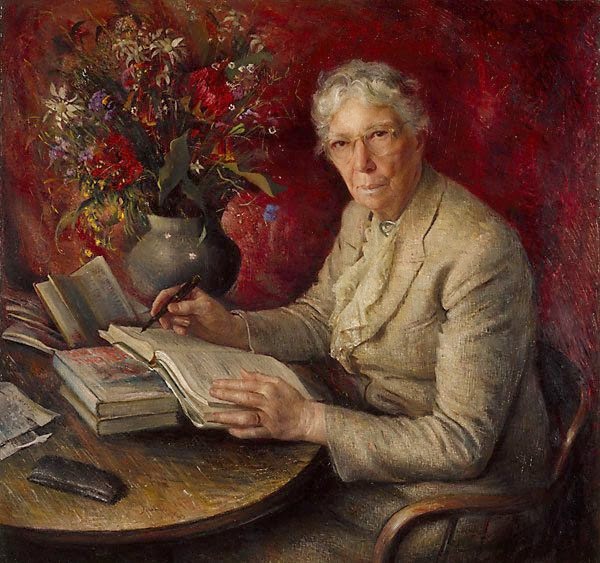 Gilmore established a reputation as a fiery radical poet, a champion of the workers and the oppressed. She followed William Lane and other socialist idealists to Paraguay in 1896, where they had established a communal settlement called New Australia. There she married William Alexander Gilmore (1866-1945) in 1897. By 1900 the socialist experiment had clearly failed. Will left to work as a shearer in Argentina and Mary and her two-year-old son Billy (William Dysart Cameron Gilmore, 1898-1945) soon followed, living separately in Buenos Aires for about six months, and then the family moved to Patagonia until they saved enough for a return passage, via England (where they stayed with Lawson), in 1902 to Australia, where they took up farming near Casterton, Victoria. 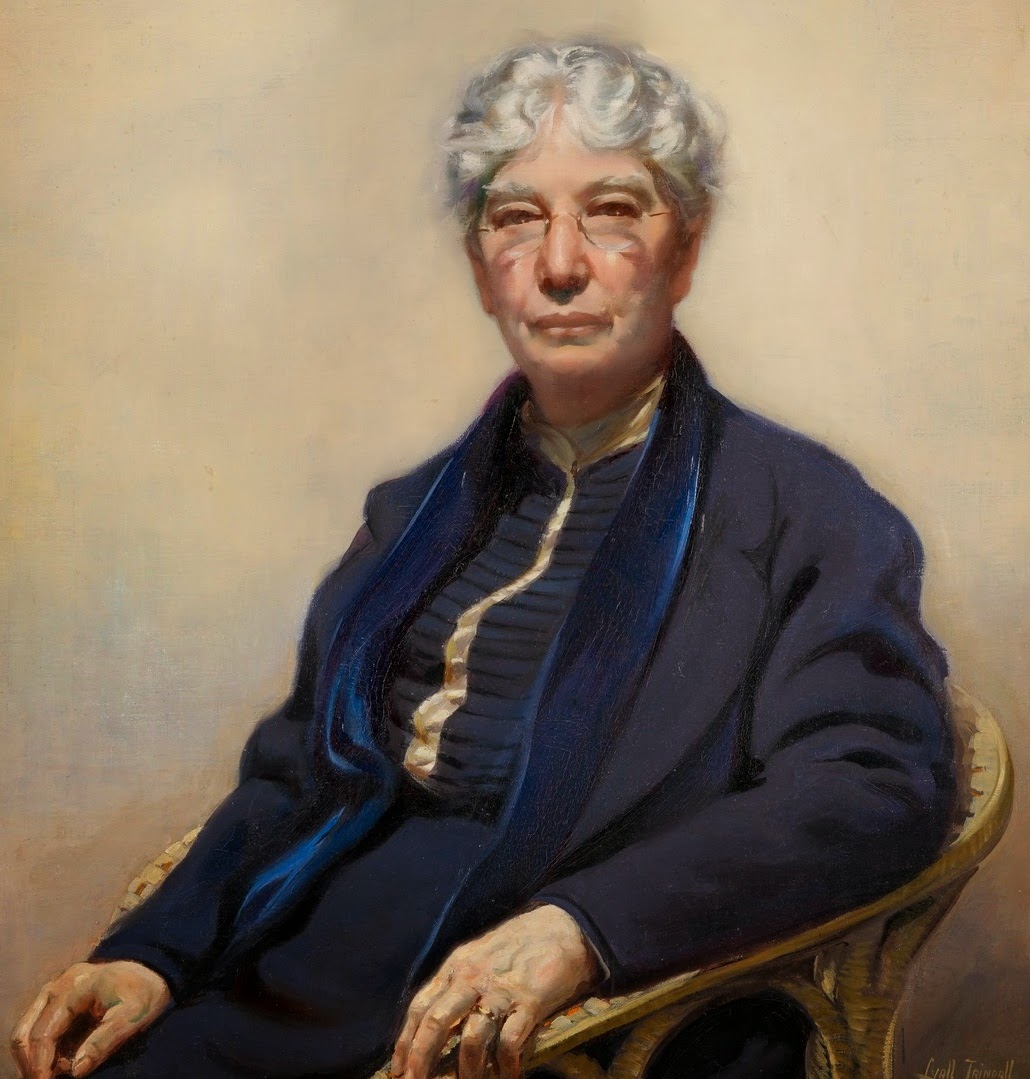 Gilmore's first volume of poetry was published in 1910, and for the ensuing half-century she was regarded as one of Australia's most popular and widely read poets. In 1908 she became women's editor of The Worker, the newspaper of Australia's largest and most powerful trade union, the Australian Workers' Union. She was the union's first woman member. The Worker gave her a platform for her journalism, through which she campaigned for better working conditions for working women, for children's welfare and for a better deal for the indigenous Australians. 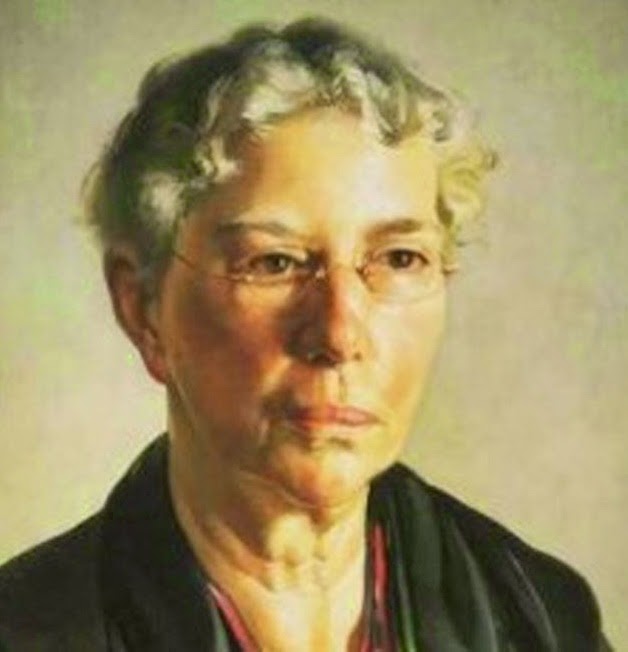 By 1931 Gilmore's views had become too radical for the AWU, but she soon found other outlets for her writing. More than 20 years later, she wrote a regular column for the Communist Party's newspaper Tribune, although she was never a party member herself. She also wrote numerous letters, as well as contributing articles and poems, to The Sydney Morning Herald on her many causes and such diverse subjects as the English language, the Prayer Book, earthquakes, Gaelic and the immigration laws, the waratah as a national emblem, the national anthem and Spanish Australia. She was a founder of the Lyceum Club, Sydney, a founder and vice-president in 1928 of the Fellowship of Australian Writers an early member of the New South Wales Institute of Journalists and life member of the Royal Society for the Prevention of Cruelty to Animals. 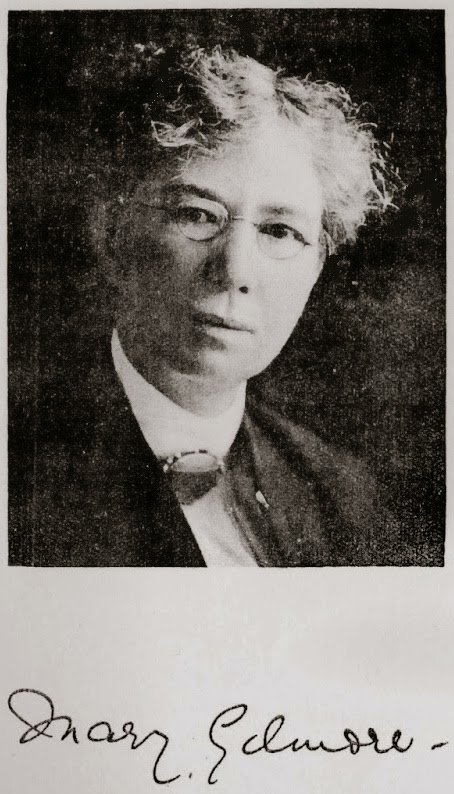 In spite of her somewhat controversial politics, Gilmore accepted appointment as a Dame Commander of the Order of the British Empire in 1937, becoming Dame Mary Gilmore. She was the first person to be granted this award for services to literature.
During World War II, perched in her Kings Cross flat at 99 Darlinghurst Road, she anathematised German and Japanese  ambitions of world domination. She recognised the growing threat to Australia in her stirring call to Australian patriotism, the poem "No Foe Shall Gather our Harvest", while she castigated Allied incompetence and corruption in the poem "Singapore", just after its fall.
Gilmore died on December 3 (Eureka Day), 1962, aged 97, and was accorded the first state funeral accorded to a writer since the death of Lawson in 1922.
Posted by Robert Messenger at 13:15