Raising a Storm in a Typewriter: Flannery O'Connor and Racism 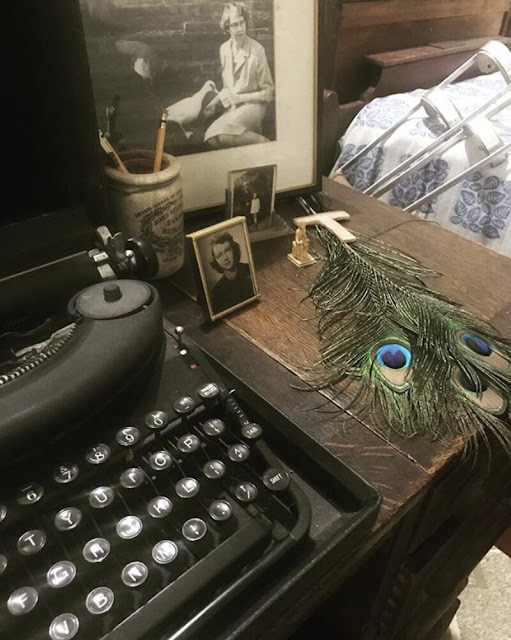 Flannery O'Connor's Remington Noiseless portable typewriter at her former home,
Andalusia Farm, Milledgeville, Georgia.
Even from the distance of 7597 miles from Canberra to California, it’s not difficult for Australians to imagine the sensitivities stirred by the Black Lives Matter protests which swept across America earlier this year. Regardless of Covid-19 lockdowns, Australia had its own Black Lives Matter protests, stemming from the deaths of Aboriginals in custody. Bear in mind that from 1902 until 1962, Australian federal voting rights were specifically denied to every “aboriginal native” of Australia, Asia, Africa or the Islands of the Pacific (except New Zealand) who did not already have the right to vote in state elections (and very few did). Indigenous Australians were not included in the Commonwealth census until 1971. Forms of apartheid (that is, “apartness” or “separate development”) still obviously exist throughout Australia. Nonetheless, overt racism is no longer tolerated, notwithstanding the continuing efforts of the Murdoch media and a vocal minority of extreme right-wing politicians and commentators. 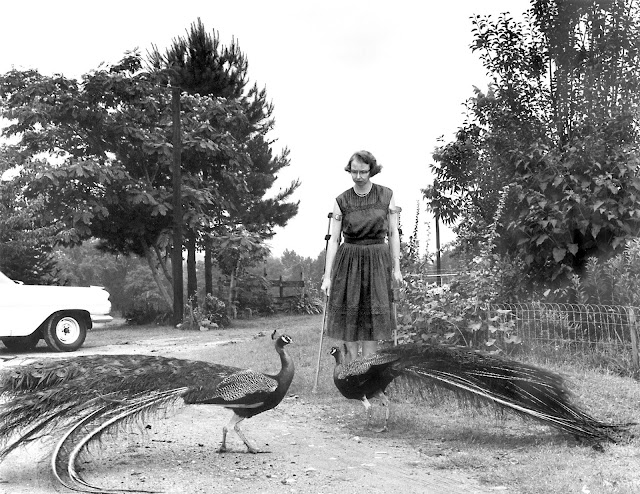 Racism in terms of typewritten literature has now become an issue in the US. Two months ago The New Yorker’s “A Critic at Large” article was headed, “How Racist Was Flannery O’Connor? She has become an icon of American letters. Now readers are reckoning with another side of her legacy”. The 3800-word essay, under a caption saying “A habit of bigotry, most apparent in her juvenilia, persisted throughout her life”, was written by Paul Elie, the author of The Life You Save May Be Your Own and a senior fellow at Georgetown University’s Berkley Centre for Religion, Peace and World Affairs. 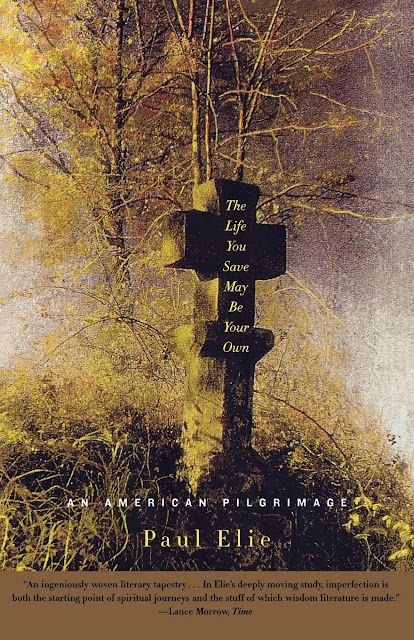 Mary Flannery O'Connor (1925-1964), born in Savannah, Georgia, was a Southern writer who often wrote in a sardonic Southern Gothic style and relied heavily on regional settings and grotesque characters, often in violent situations. 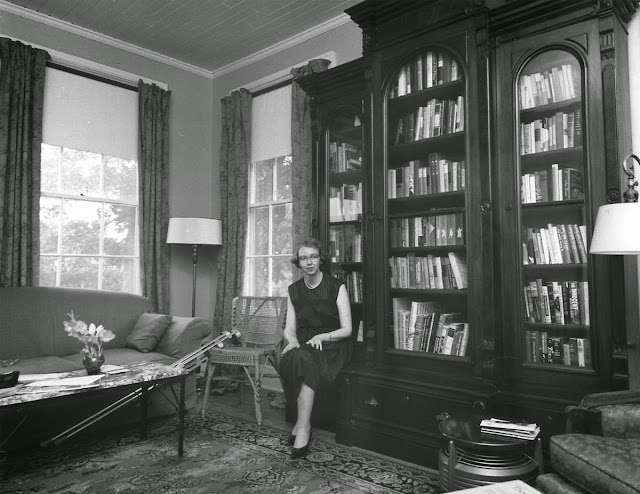 At its hub, Elie’s essay says, “Southerners, women, Catholics, and MFA-program instructors now approach her with devotion. We call her Flannery; we see her as a wise elder, a literary saint, poised for revelation at a typewriter set up on the ground floor of a farmhouse near Milledgeville because treatments for lupus left her unable to climb stairs. O’Connor is now as canonical as Faulkner and Welty. More than a great writer, she’s a cultural figure: a funny lady in a straw hat, puttering among peacocks, on crutches she likened to ‘flying buttresses’.” It goes on, “For half a century, the particulars [of her racist remarks] have been held close by executors, smoothed over by editors, and justified by exegetes, as if to save O’Connor from herself.” 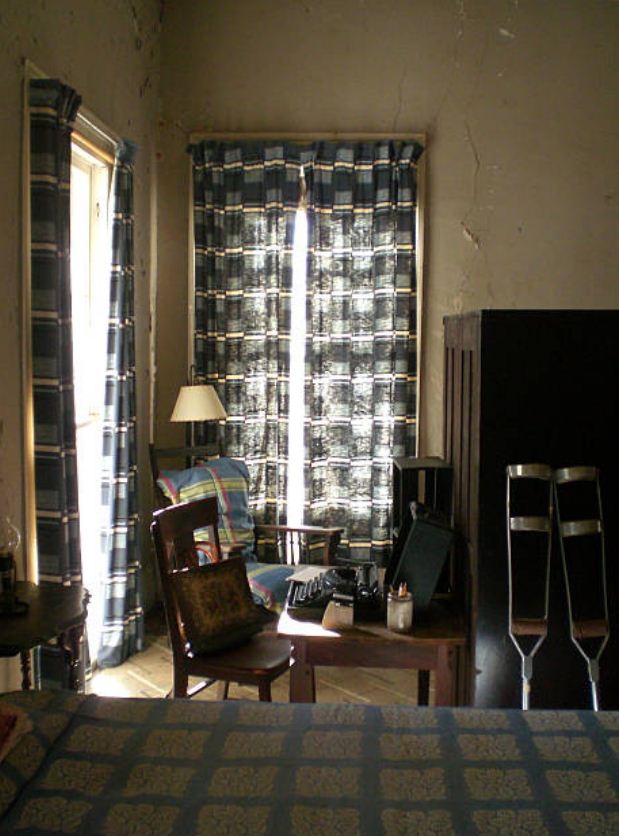 O'Connor's ‘flying buttresses’ can be seen beside her typewriter.
Elie’s article has sparked some highly critical reactions, the latest published this past week by Charlotte Allen under the headline “Flannery O’Connor and the Ideological War in Literature”. Allen, a PhD in medieval studies from the Catholic University of America, said the Elie essay “bluntly [accused O’Connor] of racism” and that he “flatly announces” O’Connor as “a ‘bigot’”. Allen said the Elie article “has since gone viral”. Allen concluded, “ … there is nothing so literal in its after-effects as cancel culture, mowing down everything in its path in the name of anti-racism or whatever the ideology du jour might be. What cancel culture has just mown down isn’t simply Flannery O’Connor or her works, but our ability to view them through any other lens except that of doctrine.” 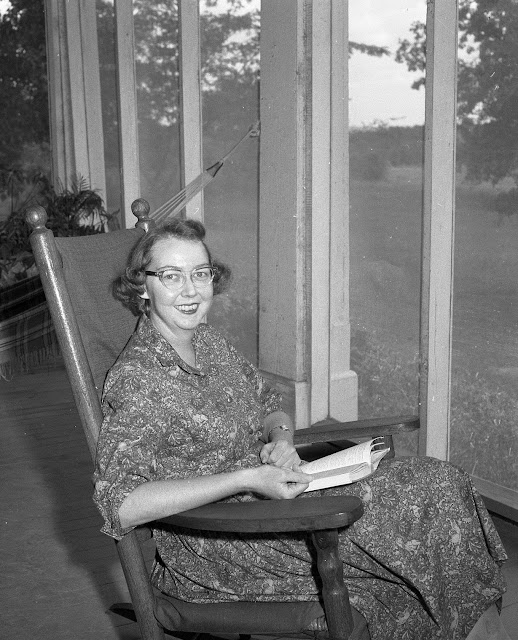 Allen’s response followed another in late June, written by Amy Alznauer, author of the children’s book The Strange Birds of Flannery O’Connor. Alznauer, one of the curators of a future Emory University exhibit on the work of O’Connor, found “some of the blind spots in Elie’s essay”. She said Elie’s essay was “sensationally titled as an exposé”. Alznauer concludes, “Flannery O’Connor’s words (all of them) will ultimately be judged by the same test all authors endure - the slow assessment of history: the combined, complex, intertwined effect of time, people, life, and the world. But here, at this moment in history, if we wish to engage with O’Connor, we might imagine ourselves standing at a crossroads, aware of all of it, the cruelty, the rot, and the power of her brutal revelations, which led her to truth about the grotesque heart of the South and the very heart of being human.” Another critique, from Jessica Hooten Wilson, suggested Elie’s headline [which of course he wouldn’t have written] “aims to be incendiary, to rile people up, to give us a scapegoat for our rage against racism. Racism is obviously a serious sin. But Elie’s portrait of the author is incomplete. Because he misreads much of O’Connor’s writing, he concludes that she was unrepentantly racist. But O’Connor did not embrace bigotry. Like all of us, she was a sinner who struggled to purge herself of prejudices she knew were immoral. And she boldly fought racism - in both others and in herself - the best way she knew how: by writing stories.” 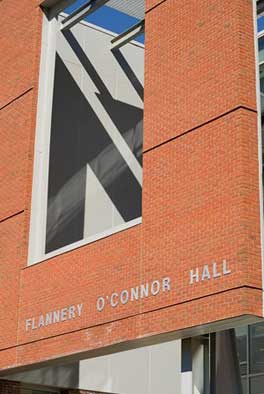 At the end of July, Loyola University Maryland announced it would remove O’Connor’s name from a residence hall because “some of her personal writings reflected a racist perspective”. “The building names we use at Loyola should declare to our students - and entire community - what sort of values we esteem and hope to instill in our graduates,” said university president Father Brian Linnane, SJ. “A residence hall must be a home and a haven for those who live there, and its name should reflect Loyola’s Jesuit values.” The residence hall will be renamed for Sister Thea Bowman, an African American who was a member of the Franciscan Sisters of Perpetual Adoration. The reaction was sharp. One comment read, “Alan Bloom was right in his 1987 book The Closing of the American Mind that American higher institutions were producing nothing but morons. If Father Linnane had ever read O'Connor, which I doubt, she uses the ‘n’ word as a literary device. In her works, the people who used the word are shown to be stupid for using … fair criticism is that she may have used it too often, okay, but everybody knows it was part of the lexicon surrounding her when she was writing in the Jim Crow South. Flannery O'Connor never had a racist bone in her body … don't be degrading [a] great Catholic American woman simply because she was white and you have heard she often used the ‘n’ word in her work.” 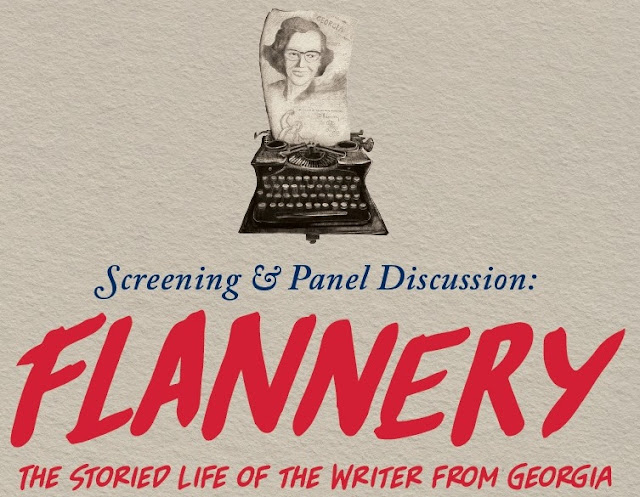 And just last week Elie re-entered the fray himself. As the Tacoma News Tribune said in mid-July, “The dialogue around O’Connor and her racism is neither new nor will it end with [the documentary] Flannery: The Storied Life of the Writer from Georgia. If anything, it may be further expanded upon, which is important.” 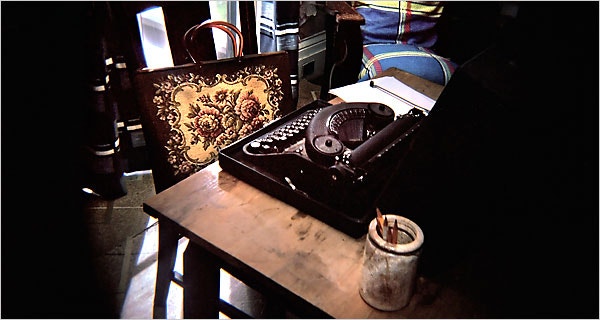 I’m not too sure about that. My own reaction to reading Elie’s essay is that it would be a shame if reading her today was prejudiced by thoughts informed by revelations from her private correspondence. What I think we should look for in the works of this period is as much a sense of the author’s time and place as anything else, if for no other reason than to appreciate that things have changed in our society. We read Dickens and are appalled by the conditions in which people, especially children, lived in England in the first half of the 19th Century. We assume, of course, that Dickens was sympathetic, but – his writing aside – incapable of changing the general way things were. Dickens was philanthropic, but, like O’Connor, by no means an angel. After all, he left his wife for an actress barely older than one of his own daughters. Today that would still be considered scandalous, but Dickens’s reputation had suffered no one jot, nor has our enjoyment in reading him. Take Ernest Hemingway, whose Nick Adams stories are in part suggestive about the lives of Native Americans. Do we think any the less (or more) of the poetry of Longfellow - in reality a boring, stay-at-home old fart - when we read of the adventures of Hiawatha? 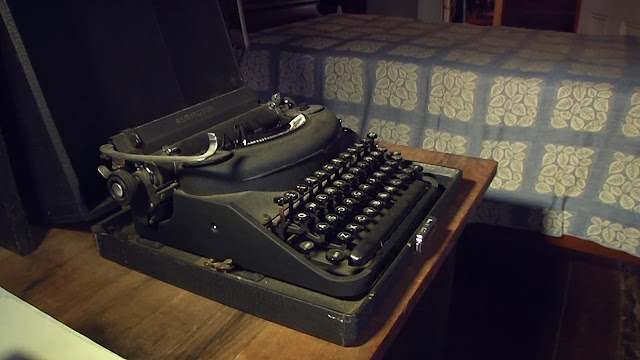 On reflection, the Elie story reinforces the awareness that racism is not inherent, but a product of our upbringing and circumstances. My own were very different from O’Connor’s, so am I, for one, qualified to judge her? We each should come to terms with not only our upbringing and circumstances, but with what we do inherit in the way of attitudes and opinions, and adjust ourselves accordingly, all the while remaining true to ourselves. I grew up in New Zealand, never aware of any overt racism (though I’m sure it probably did exist). All through primary school, almost everything we learned about our country and ourselves connected in some way or other to the indigenous Māori people, most notably through Māori legends, the reality of the Treaty of Waitangi, our place names, the history of the colonised nation (being constantly aware it was colonised and not founded by Europeans) and in particular the area we lived in, and in the sport we were so passionate about. I feel this makes a significant difference in the way one now views the broader world. 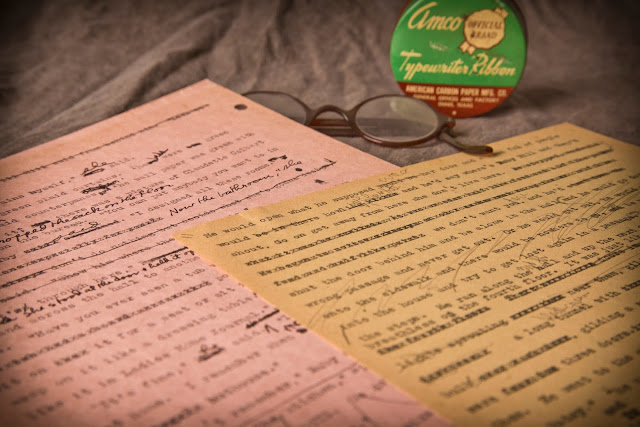 Strange as it may seem, all this has reminded me of James Joyce’s impenetrable novel Finnegans Wake (1939). I guess that in a book that’s next to indecipherable the author can get away with almost anything. Joyce writes in riddles and, like Anthony Burgess in A Clockwork Orange, more or less invents his own language. The inspiration for part of this mish-mash was Joyce watching the New Zealand "All Blacks" rugby football team perform a haka (Māori war dance) before playing at Stade Olympique de Colombes in Paris in 1925. Joyce wrote to his sister, Margaret Alice “Poppie” Joyce (then otherwise known as Sister Mary Gertrude) of the All Saints Convent of Mercy in my home town of Greymouth, New Zealand. Joyce asked Poppie for the Māori words of the haka so he could use them in Finnegans Wake. For “Kia whaka ngawari au ia hau”, Joyce, working from the correct words, wrote, “Ko Niutirenis haururu laleish”, “the sound of maormaoring”. Am I now to think of Joyce as a racist, along with everything else? Or should I take his mention as a sort of back-handed compliment to the Māori and to rugby?

Maybe a future Paul Elie will set me right. The present Elie, however, says of O’Connor that, unlike Joyce perhaps, “she was admirably leery of cultural appropriation.” As well, so Elie tell us, O’Connor had a sneaking admiration for Muhammad Ali, although that too is couched in racist terms. “Cassius [Clay] is too good for the Moslems,” she once wrote to a friend. 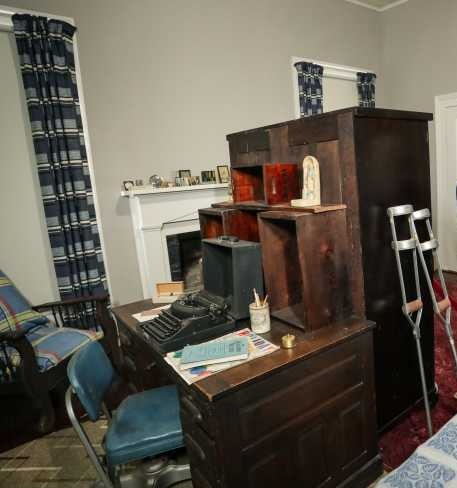 In our so-called educated society, which I think is educated to be uneducated, it seems people fail to, or do not want to, understand past societies where words and phrases were plain ordinary expressions and not meant to be hateful or racist. A person really needs to understand a writers background, and know about them in order to exclaim hate or racism. Seems in the 21s century any thing from history that is not politically correct today is racist. For as long as I can remember derogatory anything about others was not acceptable. However, we cannot change the way people spoke in the past. We can look to the future though and improve.

Some passages in O'Connor's personal letters, quoted in the story, make it pretty clear to me that she did have some racist opinions. Can she still be a great writer? Sure. We are all flawed and blind in some ways, and great writers are no exception.

I think that New Zealand is unusually blessed, for a colonial country, in that the colonists established some measure of respect and appreciation for its native inhabitants early on. That makes a big difference.