On This Day in Typewriter History (LIX)

JULY 18
JOE BARKDOLL and
I am unashamedly enamoured with the Smith-Corona 5TE. OK, it’s electric. But it has a special place in typewriter history, as the world’s first electric portable. And it’s just such a beautiful machine to write with. Given that it combines the already wonderful typing action of the Silent-Super with an electrified keyboard, the lightness of its touch is hardly surprising.
Wherever I take my 5TE (it’s pictured above in Melbourne in February this year), I can’t resist inviting others to “just have a type with it”. Invariably, those who jump at the invitation agree: what a fantastic typing machine!
It’s a little quirk of mine, but I simply love knowing the names of the people who designed my favourite typewriters. Happily, I have now found that one Joseph P. Barkdoll was the man behind the 5TE.
Barkdoll was a long-serving Smith-Corona design engineer, based in Groton, New York. He also had much to do with that brilliant line of typewriters introduced by Smith-Corona at Christmas 1949. These included the Clipper, Sterling, Silent, Super and, of course, the Silent-Super.
Barkdoll (born Ohio, April 1895) started work for what was then L.C.Smith-Corona in the late 1920s and continued to patent designs for the company until 1969, by which time it had become the SCM Corporation. And by that time Barkdoll, 74, had gone into “semi-retirement” and had moved to Sun City Center, Florida.
During his 30 years of service to Smith-Corona, Barkdoll assigned at least 23 patents to the company in its various guises.
Most of his designs relate to portables, although he did work on an SCM office machine as late as 1967. Barkdoll’s patents cover almost every aspect of the portable typewriter – from typebar operation to carriage control, line and back spacing, case shift and margin adjustment. They even extend down to the distinctive folding paper support arms, which he designed in 1941.
In his earlier days at Smith-Corona, Barkdoll worked closely with Henry Allen ‘Al’ Avery, Smith-Corona’s veteran designer who had been with the company since Corona started in Groton in 1909. By November 28, 1953, when Avery turned 65, he was “chief general and development engineer” at Groton.
We honour Joseph P. Barkdoll today because it was on this day in 1961 that updated patents for the “power operated instrumentalities” of his 5TE were issued. The designs had originally been submitted in 1957, the year the 5TE first came out.
Barkdoll specified that the “Objects of the invention are to provide improved means for effecting key controlled power operation of the typebars and other instrumentalities of a typewriter at high typing speeds and with minimum wear and noise; to provide improved means for operating such instrumentalities characterized by simplicity, compactness, low cost of manufacture and ease of assembly and servicing; and to provide an efficient system of key controlled and power operated typebar actions requiring very little power for their effective operation and permitting their incorporation in a very small and low typewriter of lightweight which is easily portable.
“A specific object of the invention is to provide power means for actuating the type bars and certain other instrumentalities of the known ‘Smith-Corona’ key-operated portable typewriter without materially increasing the size of that typewriter.”
When Smith-Corona launched the 5TE the advertising campaign stressed, “Just touch the keys and you get perfect letters - electrically!”
As British typewriter historian and collector Richard Milton points out on his Portable Typewriters website, on a page devoted to the 5TE, http://www.portabletypewriters.co.uk/corona_electric.htm
“The possibility of putting an electric motor into a portable typewriter was high on the development agenda of every manufacturer since the 1930s, but the same factor had deterred them every time the subject came up for discussion in the boardroom - cost. Electrifying the typewriter would confer little real benefit but would make the machine heavier and much more expensive.”
Richard says Smith-Corona “decided to bite the bullet” in 1957 and “the buying public welcomed the electric portable, just as they had welcomed the folding portable 40 years earlier … within a few years, every major manufacturer had followed Smith-Corona's lead by introducing their own electric portables. Although manual portables continued to be made in numbers for a decade or more, it was the beginning of the end.”
“One final irony is that while the first portables, the Blick Featherweight of 1909 and Standard Folding of 1908, weighed only five pounds and could be held in one hand, the Smith-Corona electric portable weighed a whopping 24 pounds - more than desk typewriters made from cast iron… “
Here is a wonderful British Pathe film clip about the introduction of the 5TE, comparing its light typing touch with that of a Lambert!
http://www.britishpathe.com/record.php?id=791
Here is a YouTube clip of someone using an 5TE
http://www.youtube.com/watch?v=QfyfhuohdJk
In his patent application for the 5TE, Barkdoll acknowledged earlier efforts to electrify typewriters, starting with this highly elaborate 1929 design from Burnham Coos Stickney, which incorporates an external electric motor. Stickney assigned it to Underwood Elliott Fisher:
In 1936, Walter J. Pasinski of Detroit patented this typewriter with an internal drive mechanism and assigned his design to the Burroughs Adding Machine Company.
The move toward electrifying the keyboard and other “instrumentalities” started with the 1948 design by William H. Kupper of West Hartford for the Royal desktop. It was issued and assigned to Royal in 1951, when this model was first produced.
In 1957, Barkdoll had also patented his design for the electric drive mechanism for the 5TE: 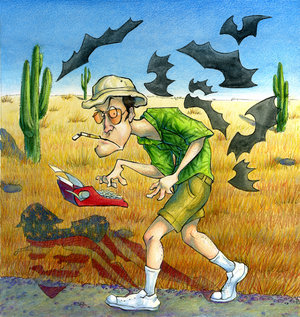 Posted by Robert Messenger at 12:57

Yay! Now I know the name of the fella that designed the best paper supports ever manufactured. :D

Another great edition covering a very interesting machine that most of us casual collectors may never own personally. (:

The 5TE is one of my favourites, too. Great you found the inventor.

I am just doing a little research on Hitler and the "Mein Kampf" typewriter - will send results.

Our tastes yet again coincide, Georg. Look forwrad to hearing more from you on the AH typewriter.

Thanks, Ted. Pleased to see you haven't given up reading this stuff yet! I agree totally about the SC paper supports. Better still, when giving a Corona a makeover, they're so easy to take off and then re-fit.

Thanks for the insights. My father used to use a descendant of the 5TE which I remember fondly.

The Pathé clip is great, including the 1 second of a lipstick-applying machine (?) at the start. The Lambert seems to be in excellent typing condition.

Here I am many months after my first comment, having just picked up a 5TE myself - and I agree it has a really superb touch!