On This Day in Typewriter History (LXVI) 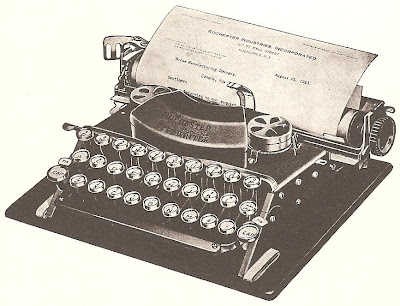 KIDDER’S POCKET TYPEWRITER
Combining all the
virtues of the Noiseless,
the Bennett and the Rooy!
AN UNFULFILLED DREAM
Of all the great typewriter inventors, mechanical engineers and designers we have looked at in this series, very few qualify to stand up there alongside the wonderful Wellington Parker Kidder, of Jamaica Plain, Massachusetts. 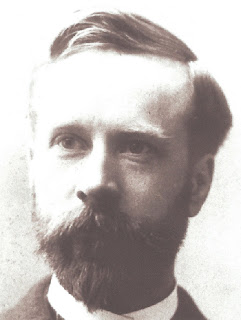 I suppose I have a particular fondness for Kidder because, for all his undoubted genius, he remained throughout his life a restless, haunted soul. While most of his finest typewriter designs went into production,  his ultimate typewriter - the Rochester - does not appear to have ever been made. In that sense, he would most certainly have died a man not totally fulfilled.
As the patent for Rochester we will look at today shows, Kidder was still seeking his own personal typewriter holy grail right up until the time he passed away, aged 71, on October 2, 1924.
Paul Lippman, in American Typewriters (1991), delivered the bad news to collectors, no doubt equally haunted by the distant prospect of ever finding one of these masterpieces: "It is not certain," wrote Lippman, "if any were actually manufactured." Lippman also refers to the American Pocket Typewriter and to the Leggatt. But to further confuse the issue, A Condensed History of the Writing Machine (1923) had this to say about the Leggatt:

From the time he cast aside, as an immediate priority, his first typewriter invention, the Franklin (below), first made in 1891, Kidder sought to perfect what he called the “noiseless” typewriter. 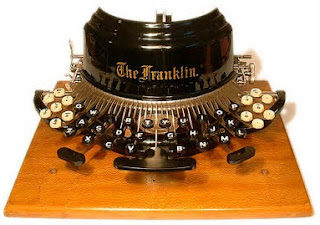 This was his primary aim from the time, in 1892, when he designed the thrust-action Wellington (below), which became the Empire and formed the type-action basis of Adlers right up to the Favorit (below) in 1929-1934. 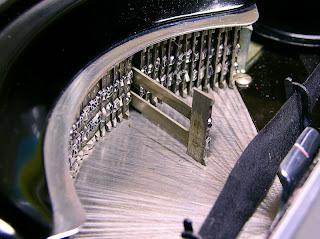 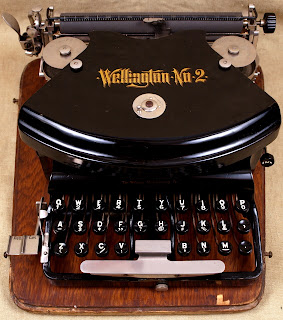 It has generally been considered that when, in 1921, Kidder started to build his beautiful little Noiseless portable (below), and then sold the rights to this design to Remington in 1924, he had reached a point in life at which he could finally rest easy in his advanced age. 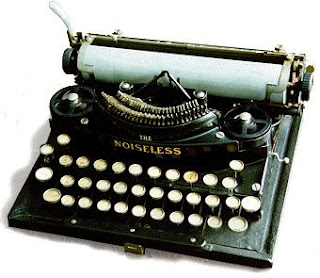 Polt collection
But doing that was clearly not in Kidder’s nature. Even after designing the Noiseless, he pressed on.

The patent we are looking at today, for which Kidder had first filed an application on this day in 1919, and then again in December 1923, was issued to him just two months before he died. It was assigned to Rochester Industries, of New York. 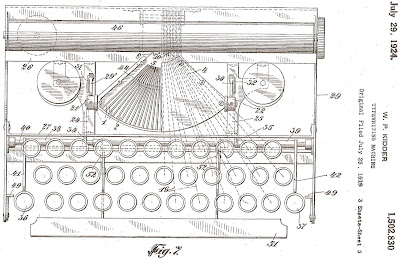 And it takes his thrust-action idea one further step from the straightforward typing action of the Wellington and the unique “trellis” (resulting in the “kiss”) action on the Noiseless.
Kidder had promoted the the Noiseless portable as “Your Junior Partner”, and with his final design he went beyond the Junior of Charles Bennett to the Bennett (below). 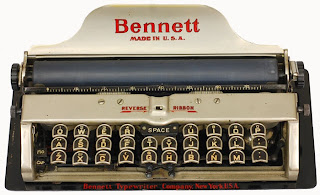 Here we can see, in Kidder’s tiny dream machine, a hybrid between the Noiseless and the Bennett (and, given the “small swinging feet” under the space bar, throw in the Rooy, below, too!). 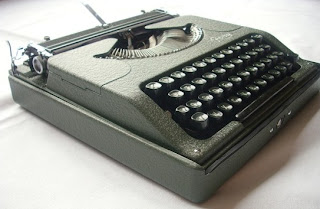 Kidder’s stated objective is a full three-bank keyboard typewriter, using typebars instead of a typewheel, but still about the size of the Bennett. He declares it to be a “pocket typewriter” which could fit in “an ordinary overcoat pocket”. 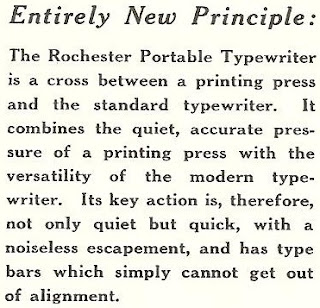 What a brilliant machine this would have been, if it ever had been made. Looking at this design, I feel convinced that today, Kidder pocket typewriters would be among the most cherished typewriters in the typewriter collecting world, right up there with Blickensderfers, Lamberts, Odells and Columbias, to name just a few. 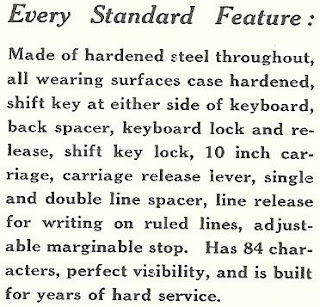 Combine Kidder’s name and his reputation for designing machines which stood up admirably to the rigors of heavy work, with a keyboard, typebar typewriter the size of the Bennett … the thought is so appetizing it’s almost unbearable to summons. 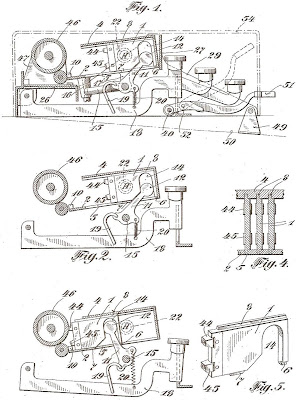 On this machine, the typeslugs would be placed on much deeper typebars, slotted snuggly between two segment plates. 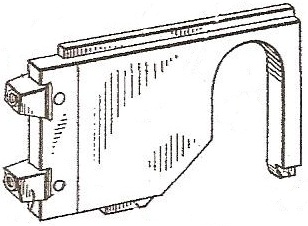 The typeslugs would be about the same size as the diameter of the platen, and be pivoted from below on levers looking almost like jigsaw puzzle pieces. Kidder described these as “disk headed actuating levers” and called his arrangement a “curved resilient link connection”.

The typebar action, he said, would have “an accelerating movement … with the momentum of a substantially freely moving typebar …
“The type-bars are radially arranged for longitudinal movement, and with actuating levers for the typebars radially arranged directly beneath the typebars in such manner that each typebar and its respective lever move in substantially the same vertical plane. 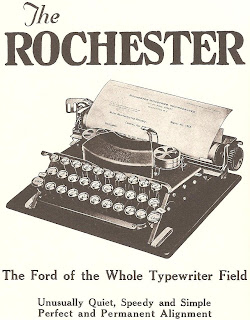 Kidder wrote that, “The need for a practical typewriting machine of exceedingly small dimensions has been long recognized in the art and many types of small machines have been developed. In the development of these machines, there has been a tendency to depart from the standard keyboard either in crowding the keys or in using a different kind of arrangement of keys.
“In these attempts, keywheel machines have been developed wherein a small compass has been obtained, but in most cases such machines have departed from the standard keyboard or were of such size as exceeded a pocket portable machine.

“In developing small machines the swinging bar type has also been used, but in this type it has been found necessary to produce a relatively high machine which was also unadapted for pocket use [bearing in mind here the lower depth Kidder achieved with “direct movement” on the Franklin].
“The present invention overcomes the difficulty of the known prior art and comprises a standard keyboard machine of such compass as to be capable of being carried in an ordinary overcoat pocket …”
Oh, Mr Kidder. What dream machines you wrought! 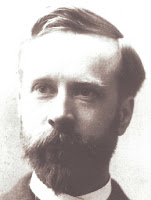 Wellington Parker Kidder was born on February 19, 1853, in Norridgewock, Maine.
His father, Wellington Kidder, a farmer, invented several improvements in farming implements.
Young Wellington attended district school, and for three years the Baton preparatory school in Norridgewock.
In 1868, aged 15, he patented an improvement in rotary steam engines.
Kidder studied applied mechanics and drawing in Boston and in 1874 became interested in printing presses.
He invented a web automatic adjustable printing press, which received a diploma from the Massachusetts Charitable Mechanics Association in 1878. The Kidder press went into general use, being especially adapted to job printing and to printing and consecutively numbering railroad and other tickets from a continuous roll. 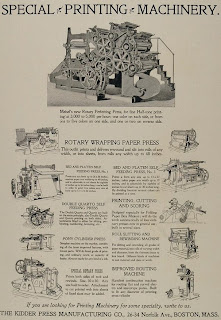 Kidder made numerous improvements in printing presses, including intermittent web feeding, as well as a system of machinery for bending and finishing electro-plates.
In 1898, after several months in France, Germany and England, and a thorough investigation of vehicle design in the US, Kidder invented improvements in automobiles and in heavy motor truck.
His inventions covered the direct spring-mounted gear, eliminating the chain and sprocket wheel.
Wellington Parker Kidder died on October 2, 1924. With him died the plans for what might well have been the greatest small typewriter ever made. 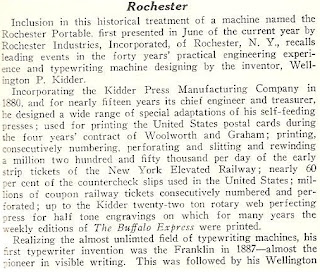 Posted by Robert Messenger at 13:10

Greetings from the California coast! -- This is a fascinating entry. I have long coveted a Rochester and haven't given up hope that a prototype might turn up. This is my first look at the patents.