On This Day in Typewriter History (LXIV) 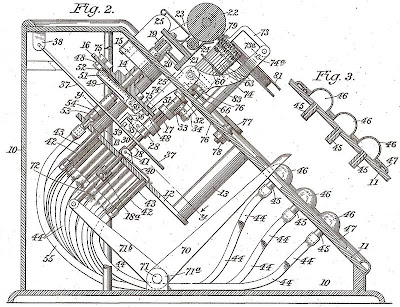 Carl William Weiss's 1895 pneumatic typewriter design
July 23 seems to be something of a red-letter day for typewriter inventors. The more so because, for a change, the intent is pretty obvious in the eight patents we will look at today. Far too often I feel I should be like Byron Alden Brooks, and have a masters degree in mechanical engineering, in order to work out what the specifications of patents are actually on about. And unlike yesterday’s Australian hairbrain keyboard scheme, these seem to me to be perfectly reasonable - indeed sensible - ideas. 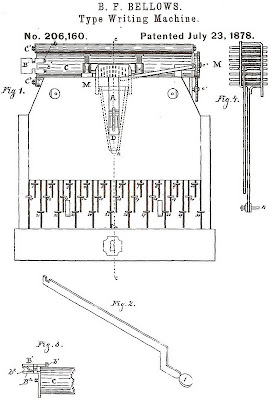 First, Benjamin Franklin Bellows of Weeping Water, Nebraska. On this day in 1878, while the typewriter was still quite new in the world, Bellows – at times appearing to be oblivious to what had already happened in Milwaukee and New York – was issued with a patent  (above)for a typewriter which typed in both upper and lower case letters.
Bellows was marginally behind Brooks with this invention. Brooks had applied for a patent for his method on April 30, 1875, and was granted it on April 30, 1878. Bellows applied for his patent on April 16, 1877. Where Bellows was ahead of the field, however, was that his typewriter would employ a hammer to strike type against the platen. Was this, perhaps, where James Bartlett Hammond got the idea to do the same with his machine two years later?
Michael Adler in Antique Typewriters (1997) mentions Bellow’s design, with its three-bank keyboard. What he doesn’t touch on is the main thrust of Bellows’ invention. Which was to “speedily and easily write any matter that may be desired”. Bellows said, “One of its most marked advantages is that it makes nearly twice the number of characters that have been made by machines heretofore invented with a much less number of keys. I use only 26 working and four operating keys, making 30 in all, and make 78 characters, while others have generally used over 40 keys, each capable of making only a single character.”
Benjamin Franklin Bellows was born in Austinburg, Ohio, on March 27, 1851. He graduated from Oberlin College, Ohio, in 1874. After living with his family at Weeping Water, Nebraska, he moved to Cleveland, where he established the Electric Compositor Company, having invented the Bellows Electric Compositor. 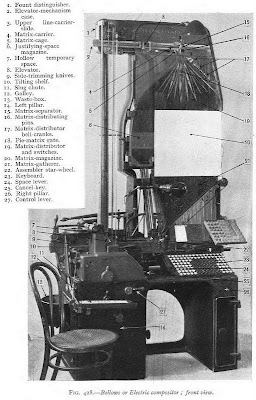 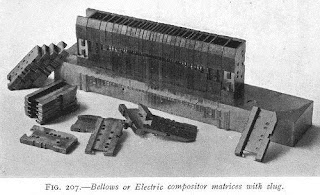 Bellows also made the first semi-automatic telegraphic transmitter key, the Mecograph, in 1904. It was modified by Bellows in 1907 and again in 1909. Bellows died in 1913 and the Mecograph Company was absorbed by Vibroplex. 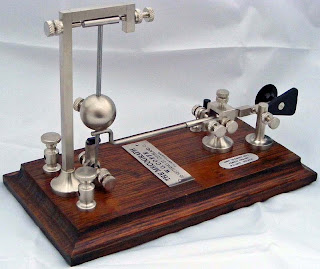 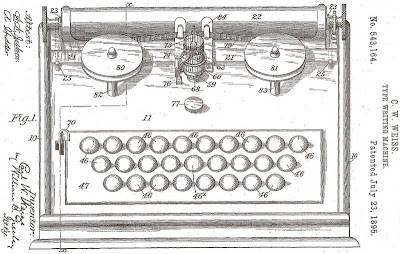 Weiss assigned the design to August Mietz, of New York, for whom Weiss had also designed this 1893 six horsepower two-stroke semi-diesel Mietz and Weiss Engine. 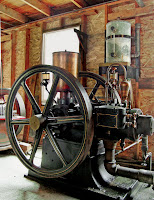 For his typewriter, Weiss explained the means of bringing “the type characters to the line of print is controlled by pneumatic devices”.
In this way, Weiss added, the use of levers, keys and type characters would be “dispensed with and the action of the machine made correspondingly lighter, and the construction simpler, cheaper, and less likely to be disarranged”. A typewheel would be used. 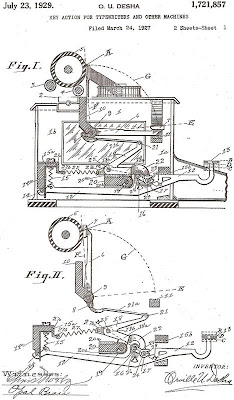 Third, Orville Uric Desha, of Fort Collins, Colorado, who was issued with a key action patent (above) on this day in 1929. I wonder if this was the first time the idea of reverse breaking and springing the linkages in type levers enabled this type of fast action typing?
Desha described improvements to a development for which he had first applied for a patent in 1923 (issued 1927).
Desha was born in Lovelaceville, Kentucky, on November 23, 1878. He died in Fort Collins on April 13, 1942. In 1911 he was listed as president of the Desha School of Commerce in Fort Collins, “A flourishing city in northern Colorado, 74 miles north of Denver”. 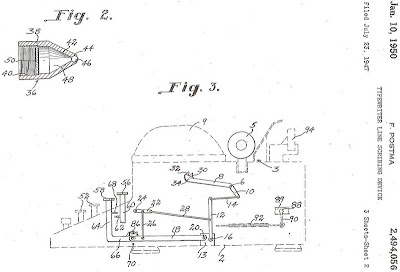 On this day in 1947, Frank Postma, of Paterson, New Jersey, applied for a patent (above) for this clever line scribing device (it was granted on January 10, 1950). Postma described it as “operating in conjunction with the tabulating system of the typewriter, to produce lines such as underscores, dashes and the like, of predetermined length”.
Three interesting typewriter-related patents were issued on this day in 1957. 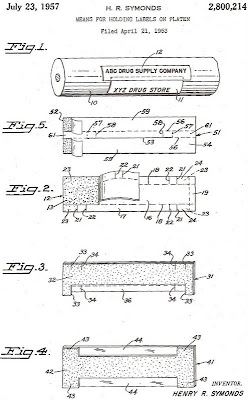 One went to Henry Reginald Symonds (July 28, 1907-July 10, 1985), of San Bruno, California, for an interesting method of typing on labels.
The idea was a device which could be attached to the platen to hold small papers, labels and tags in position while being typed. “At the present time,” wrote Symonds, “small labels and the like create a problem in typing in that they are of such length that the pressure rolls which function to retain paper in position on the carriage of the typewriter fail to engage them. Accordingly, the labels tend to tilt or fall from proper position unless manually held. Where a large number of such labels are typed, considerable time and effort are wasted. Accordingly, it is a principal object of the invention to provide a means for retaining a label in proper position on a typewriter platen while it is being typed.
“One of the features of this invention is that the device comprises only a thin piece of paper, cellulosic material, cloth, oiled silk or other flexible substance carrying adhesive … when not in use its nature makes it possible to use the typewriter for any desired purpose without the necessity of removing the sticker.
“Another advantage is that its simplicity makes installation and removal rapid and easy without use of any tools or without the necessity of instruction of the user.” 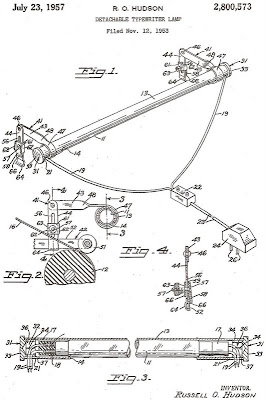 Another seemingly useful device was patented by Russell O. Hudson, of San Francisco. It was for  detachable lamp and copyholder for typewriters (above). 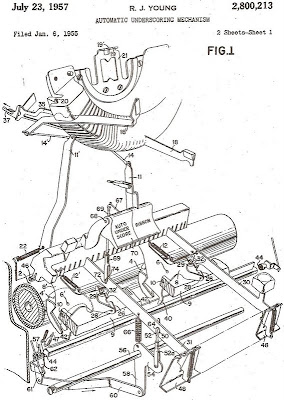 Richard J. Young, of Poughkeepsie, New York, assigned to IBM an automatic underscoring mechanism for power-driven typewriters. “In some industrial applications,” he wrote, “it is necessary, for emphasis, to underscore certain words or phrases or even whole paragraphs. With the conventional typewriter, it would be necessary for the typist first to type out the intended wording and then go back and use another key to underscore each and every letter which she had previously typed. This is an obvious duplication of effort, and accordingly, it is the first object of this invention to provide an automatic underscoring device for a power driven typewriter.”
I am particularly fond of the idea for which Mary D. Johnson, of Decatur, Alabama, applied for a patent on this day in 1959 (it was issued on August 30, 1960). It was for a “particle collector and erasing shield for typewriters”. 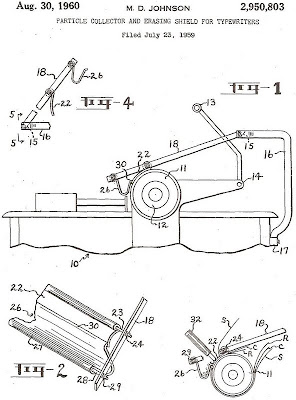 It would be “pivotally mounted on the typewriter for movement between operable and inoperable positions.
“Heretofore, combination particle collecting and shielding devices have been of a single integral member and no provision has been made to mount an erasing shield and a particle collecting tray for individual pivotal movement between a pair of arms pivotally mounted on a typewriter. The erasing shield is used to protect the sheets behind the sheet on which erasures are being made so that other copies will not be smudged by carbons and the collecting tray collects particles falling from the erased sheet.”
I don’t use erasers with typewriters, but I know of a few other things which a “particle collector” might collect, and which can damage the workings of a typewriter, especially if they get into the segment comb and hinder the free movement of typebars.