On This Day in Typewriter History (LXIII)

JULY 22
A TOP IDEA FROM DOWN UNDER?
At last, an Australian typewriter inventor! Joseph Bartlett Davies, of Melbourne, Victoria. His patent for a typewriter keyboard mechanism was filed with the US Patent Office on this day in 1922. 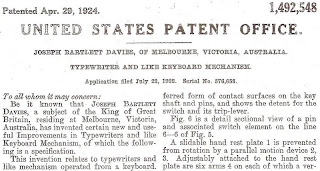 But wait! Before I go jumping in here, like a drought-stricken kangaroo into an outback billabong, let’s take a closer look at this. Um, who said Australians can’t invent anything related to the typewriter? Well, it seems that’s right. This is one crazy, mixed up idea.

Seemingly, the plan is to use some sort of a hand rest plate, so that the typewriter “can be operated by a single hand, controlled purely by touch without movement of the fingers from the keys upon which they rest.”
Duh? 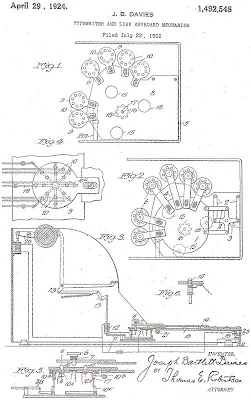 Anyway, we probably should be a bit patient with Mr Davies. This “invention” of his looks like it was a last-ditched, desperate effort to restore his family’s fortunes before he died. He had, 30 years earlier, squandered what would amount to more than $60 million in today's money.
As it happened, this patent was issued just eight weeks before Davies did die – almost destitute.
And frankly, I don’t think this keyboard attachment idea of his would have made him much money. Indeed, I very much doubt if it was ever even made.
Joseph Bartlett Davies was an accountant, banker and speculator, born in Halstead, Essex, England, on September 30, 1843. He was the son of Ebenezer Davies and his wife Ruth, née Bartlett, and the grandson of a Congregational minister. Ebenezer Davies acquired a straw hat manufactory at Halstead, but after inheriting an annuity of about £500 from a Welsh uncle, he migrated with his family and landed in November 1849 at Geelong, Australia. Joseph Bartlett Davies was just six.
Ebenezer Davies became a tannery and property owner and a director of the Geelong and Melbourne Railway Company.

Ebenezer’s sons by his first marriage all fared – at least at first – reasonably well. The oldest, Sir John Mark Davies, was a solicitor, politician and speculator, George Schoen Davies was a banker, company manager and accountant, and Sir Matthew Henry Davies (above) was a solicitor, speculator, politician and philanthropist.
Joseph Bartlett Davies was educated at Geelong Grammar School. He tended to be led by his younger brother Matthew Henry and in 1882 was appointed managing director of his Freehold Investment and Banking Company, which was primarily engaged in land subdivision.

Joseph Bartlett Davies borrowed large sums to prop up his company before it was liquidated in February 1892. It went bankrupt in April 1894 for £594,000, the highest personal debt of the family, and he was only able to pay a quarter penny in the pound. His valuable art collection and fine furniture were sold and after his discharge he worked as an accountant until his death on October 28, 1924, at a private hospital in Malvern, Victoria. 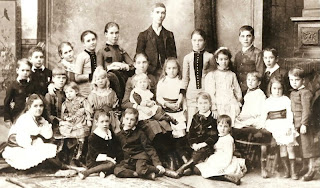 One of his sons, Leslie Bartlett Davies (in this group above), who witnessed Joseph’s patent application to the US Patent Office, was a founder member of the Institute of Patent Attorneys of Australia, for which he received a Queen’s honour in 1965. He had been appointed by the Federal Australian Government as a deputy examiner of patents in Melbourne in 1907. Leslie no doubt encouraged his father to apply for the US patent on his "invention". 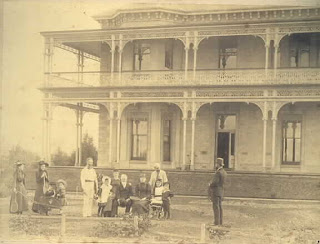 The photograph above shows Joseph Bartlett Davies, fifth from left, with his family in the front garden of their home Glenbervie on Glenferrie Road, Malvern, Victoria. The family moved into Glenbervie on July 12, 1889. The house with 30 rooms and tower and the property included 13 acres.
It’s possibly best if I try to let Joseph Bartlett Davies explain his own typewriter invention:
“The object of this invention is the construction of a keyboard and adjuncts to a typewriter … of such a nature that the movements of the hand required for working the same shall be the shortest and least laborious possible of attainment …
“The outstanding feature of the invention is the combination of a vertical movement of any one finger of one hand simultaneously with a horizontal movement of the whole hand …
“Since the whole hand or wrist can be readily guided so as to move in eight different directions (namely — forward, backward, right, left, and positions between these), the combination of six keys (allowing two for the thumb) with these movements will [make?] 48 points of possible contact, each one of which can be made to operate a character or used for other purposes and not one of these hand or finger movements need exceed one-eighth of an inch in length.” 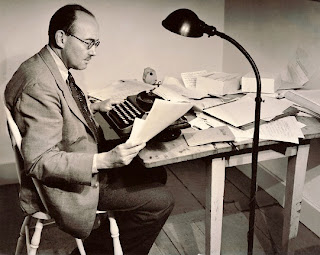 The American author, poet and short story writer Stephen Vincent Benét was born on this day in 1898 in Bethlehem, Pennsylvania. Benét is best known for his book-length narrative poem of the American Civil War, John Brown's Body (1928), for which he won a Pulitzer Prize in 1929, and for two short stories, "The Devil and Daniel Webster" and "By the Waters of Babylon". He died in New York City on March 13, 1943, aged 44.

Posted by Robert Messenger at 12:30