Got a bit behind with the "On This Day in Typewriter History" series last week because I had a visit from a photographer from Australian magazine frankie http://www.frankie.com.au/
The magazine wanted a spread on the models of typewriters used by writers and the like - the usual suspects: Hemingway, Hunter S, Dylan, Kerouac, Orwell, McCarthy (I gave that one to the photographer as a souvenir, she was cuffed!), Ruth Park etc etc.
So I got out a few extras that were close at hand and laid them on some tables. They're still there. They look so pretty I can't now bring myself to put them back in storage. Gotta eat sometime, though, I suppose ... 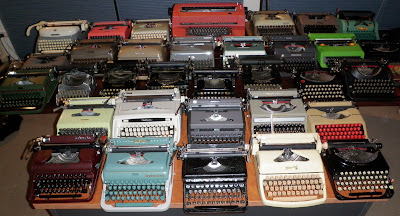 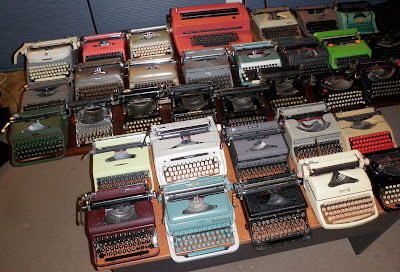 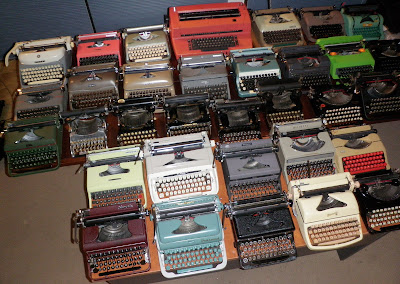 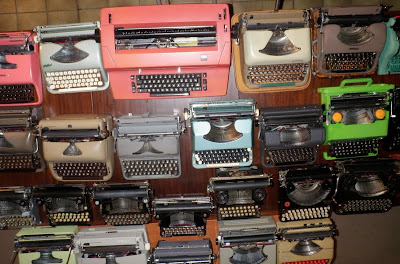 I knew a man, his brain so small,
He couldn't think of nothin' at all.
He's not the same as you and me.
He doesn't dig poetry. He's so unhip that
When you say Dylan, he thinks you're talkin' about Dylan Thomas,
Whoever he was.
The man ain't got no culture,
But its alright, ma,
Everybody must get stoned.

- Paul Simon
A Simple Desultory Philippic
(Or How I Was Robert McNamara'd into Submission)
1965
Posted by Robert Messenger at 18:45

Thank you. I still haven't got around to putting them away yet! I love this group, too.