On This Day in Typewriter History (LXXI)

JULY 30
FREEMAN LORENZO TWISS
and "THE MEN WHO MADE THINGS WORK"
Naturally we tend to concentrate on the “big names” in typewriter history, the great inventors and their grand visions. In doing so, of course, we overlook the “nuts and bolts” people, those craftsmen who had a vitally important role to play in making the “big ideas” become a reality. Without them, some schemes might never have left the drawing board to be turned to fruition – at least successfully. 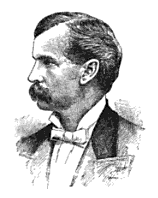 I get the impression Lucien Stephen Crandall (above)was more an artist than an artisan. He certainly had a fine concept of what his beautiful typewriters should look like, and how they might work, if perhaps not the practical knowledge to make them always work properly.

Take, for example, his elongated typesleeve, of which we have written so much in this series – the one Crandall was forced to adopt when John Jonathan Pratt sold the rights to his typeshuttle to John Bartlett Hammond, and over which he had so much patent infringement trouble. Historian Michael Adler, as we have mentioned, even suggested Crandall got the idea for the typesleeve from Robert Thomas’s 1854 Typograph. 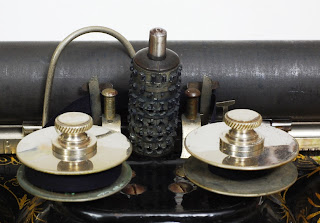 What makes the typesleeve work so well? Cam-motion. Ergo, into a picture previously, perhaps, only painted in Crandall’s fertile mind steps one Freeman Lorenzo Twiss, a skilled worker at the Crandall Type-Writer Company’s Groton factory, a man with the engineering nous to turn the operation of the typesleeve into a successful realisation. Twiss (born Auburn, Worcester, Massachusetts, December 2, 1844) was one of at least two Crandall employees at the Groton plant who worked on developing improvements for Crandall typewriters, to bring to them a necessary degree of proficiency. Twiss and his colleague, Luther Adelbert Barber, jointly and individually patented their designs for components for the Crandall machines.

Twiss described his cam-motion patent, issued on this day in 1889, thus: “My invention relates to that class of typewriters in which there is a type-cylinder carried upon a pivoted arm and thrown forward against the impression-cylinder when the key is depressed; and my object is to so construct the moving parts interposed between the key and the type-cylinder that the initial movement of this cylinder will be quite slow and easily operated and its motion increased gradually in speed as the inertia is overcome, and at the end of its stroke deliver the impression at proper speed and force to make it clear and plain, and also to prevent any recoil of the type-cylinder after delivering its blow till the pressure is removed from the key.”

Other typewriters and typewriter components to be patented on this day were: 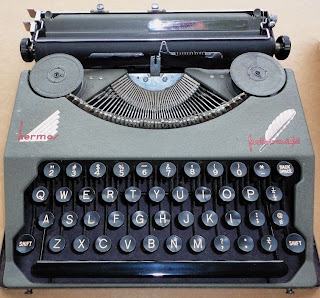 The Hermes Featherweight-Baby: On this day in 1934, Giuseppe Prezioso, working for E. Paillard and Company in Yverdon, Switzerland, had his patent first granted - in Germany. It was patented in the US on December 13, 1938.

The ribbon hood spring latch: Patented to Max Pfan, of Frankfurt, Germany, for Torpedo portables, on this day in 1940 (but seen above most effectively applied to an Underwood). “The invention relates to typewriters, particularly to portable and small typewriters, in which the type mechanism and the inking ribbon spools are covered by a protecting hood, and has for one of its objects the provision of means for securing the said protecting hood to the frame of the machine in such manner that for the purpose of replacing the inking ribbon, cleaning the types or the like, the protecting hood may be removed or swung open without the aid of tools, but is nevertheless securely held on the frame of the machine during use.” 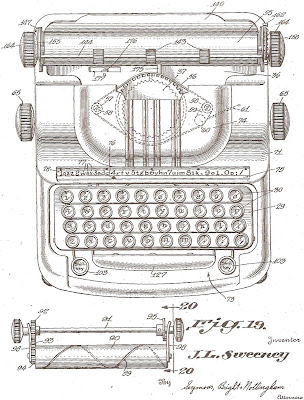 Single plate keyboard. Also on this day in 1940, Joseph Lee Sweeney, of New York, patented a rather odd design, relating to a ”typewriter of such character that speed and volume of work are of secondary importance but in which cost and educational value are of prime importance [does he mean toy typewriter?]. In accordance with my invention, all the functions of the usual key levers of a normal typewriter are reduced. The entire keyboard is on a single plate on which the normal key buttons are fastened in their normally correct position, so that a pressure on any button will type on the paper whatever type has been previously selected. In my invention the particular type character selected is controlled by hand and the control mechanism includes a relatively long cylinder or roll extending across the machine inside the casing and position[ed] rearwardly of a long narrow slot or window. Such cylinder is operatively connected to a typewheel so that movement of the cylinder is in exact relation to movement of the typewheel.”
Duh?