On This Day in Typewriter History (LXI)

JULY 20
The Typograph to the Pearl,
the Sun, the Odell
and the New American:
Linear Indexes from
Robert Thomas to
Henry Thomas 1854-1886
Was there an American typewriter designed before the Sholes and Glidden which went into production after the Sholes and Glidden?
It’s a good question. Could the answer possibly be the Pearl? 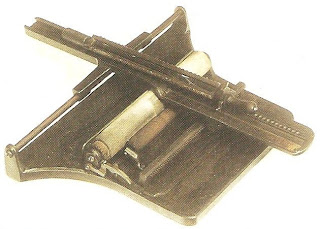 Collector, historian and author Paul Lippman must have opened a can of small worms when, in his 1992 book American Typewriters, he boldly asserted that the Pearl (above) was a machine built to a design patented as the “Typograph” in 1854 by Robert S. Thomas (below). 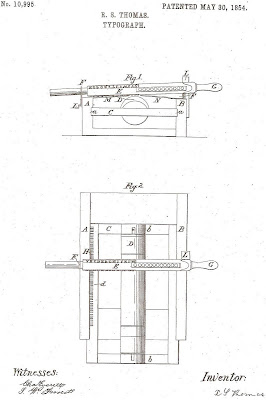 In taking this line, Lippman sailed into uncharted waters where, it would seem, no typewriter historian had been before.
Buoyed by this discovery, Lippman confidently added, “but [it was] not marketed until Enoch Prouty of Chicago manufactured it in 1887”.
That would mean the Pearl design pre-dates the Sholes and Glidden by as much as 17 years, and yet didn’t go into production until 14 years after the S and G (by which time Thomas's patent would presumably have expired).
Lippman threw further fuel on to this little fire when, writing about the Sun index (first two models below), he said, “The Sun’s 1885 patent for a mechanism almost the same as the Odell cast a shadow on the 1889 patent of Levi Judson Odell, and may itself be eclipsed by the 1854 patent of Robert Thomas for the Pearl. 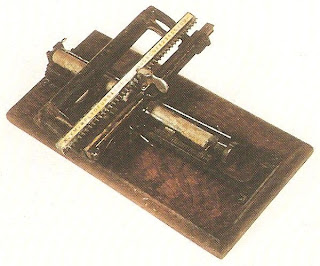 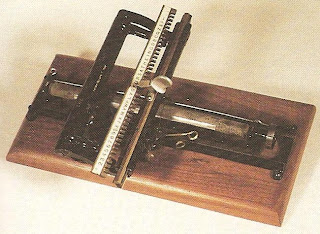 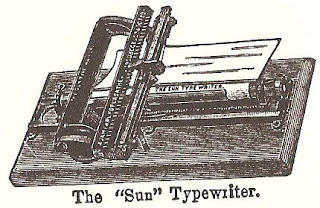 “The Sun’s major difference from the Odell is its base, which is square rather than round ...”
However, when one looks at Levi Odell’s original 1889 design (below), it is for a machine shaped virtually the same as the Sun. This is the model nowadays referred to as the “dogbone” or “seal-footed” Odell. The round-based Odell was patented in 1891. 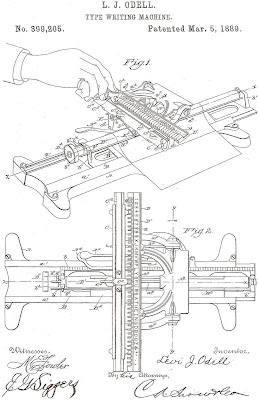 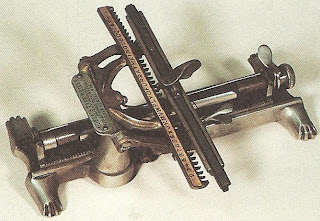 Interestingly, the square-based Sun later (below) adopted the original linear four-footed Odell “dogbone” shape. It’s been suggested the Odell was the more successful of the linear index typewriters – perhaps the Sun wanted to step into those “seal shoes” when the Odell went round. 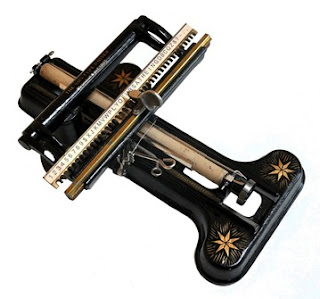 The make things all the more intriguing, Levi Odell went back to a square-shaped base when he designed the machine variously known as the New American (perhaps for overseas markets) and the International. 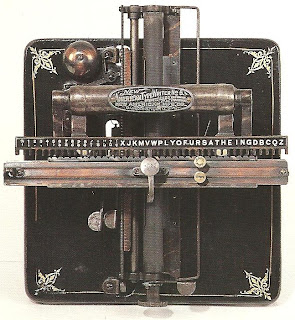 This last machine has caused much confusion among typewriter historians, many of whom date it from 1890. But Darryl Rehr in Antique Typewriters (1997) wrote, “few seem convinced”. He recognised the hints that the New American had succeeded the Odell, and indeed he was right. Levi Odell did not patent the New American design until 1909 (below). 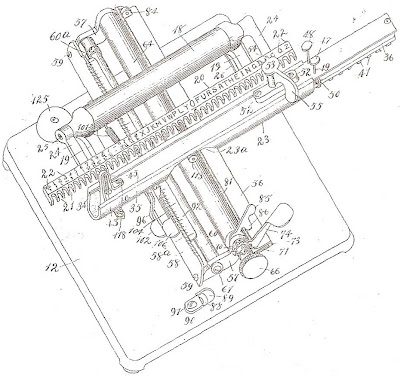 Michael Adler in his Antique Typewriters (also 1997) is more scathing about Levi Odell and his ability to confuse researchers over dates.
“The patent protecting the [Odell] design was filed in 1887 and granted two years later,” wrote Adler, “although a contemporary brochure claimed that the company had been in existence since 1877.
“The essential features of the machine were identical to those used on the Sun … patented in 1885 (below). 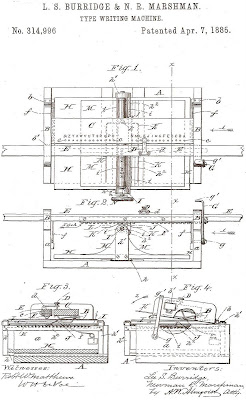 "On the strength of this dating, the inventors of the Sun might well claim priority, which might also explain why Odell promoted the 1877 date … the very fact itself that patents were granted to both inventors for virtually identical designs remains mystery enough.”
“The inventors of the Sun”, of course, were none other than that dynamic typewriter-inventing duo, Lee Spear Burridge (below) and his once trusty sidekick, Newman R. Marshman.

It is Adler who draws us to today’s patent (below), when he writes that a typewriter patented on this day in 1886, by Henry J. Thomas of New York, joined those with a “transverse linear index design [which were] manufactured with some success … such as the Sun and the Odell”. 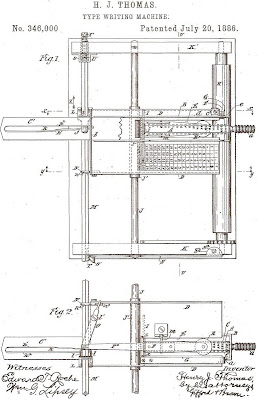 Henry Thomas's patent (significantly just 15 months after the Sun, but still before the Odell) was in part assigned to Abram E.Pratt of New York and Sidney C.Thompson of Brooklyn.
Adler had special praise for Henry Thomas’s design, calling it “quite remarkable”. 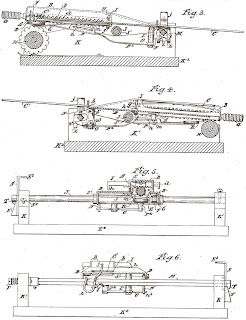 The reason being that “The index was of square section and had typefaces on all sides, permitting syllables and short words to be printed at one stroke; this hybrid of a syllable machine and a linear index was quite remarkable”.
The idea of one-stroke short-word typewheel typing was a few years later tried by George Blickensderfer (below) and was to be incorporated into his Blickensderfer 1. 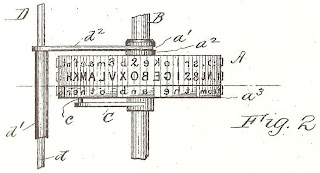 Adler did not find much to praise in Robert S. Thomas’s 1854 design. He said it “consisted merely of type attached to a cylinder and moved manually in a wooden frame, and discounting the Writing Glove, was quite possibly one of the most rudimentary typing devices ever invented”.
Rudimentary, maybe, but Lippman was to find it had successful offspring.
Unlike Lippman, Adler did not draw a line between the Robert Thomas design and the linear index machines which became something of a typewriter inventors’ fad in the mid-to late 1880s – with the Sun, the Odell (1891 design below) and the Henry Thomas design. 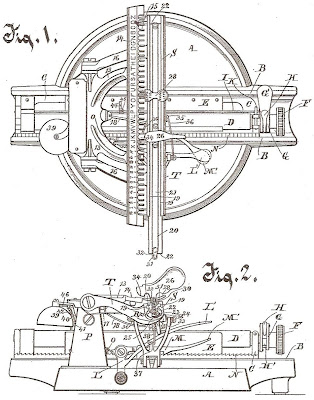 Sadly, I am unable to make any connection between Robert S. Thomas of Wilmington, North Carolina, and Henry J. Thomas of New York City – but there was, after all, a 32-year gap between their patents.
Perhaps Adler is right in his disregard for the Robert Thomas design. In his The Writing Machine (1973), Adler said the “primitive” Thomas machine “can be built on a do-it-yourself basis by using ‘two rolling pins and a knife tray'”.
Adler did add, however, “Give it credit for one thing ... the typesleeve with locking holes is a direct ancestor of that used on the famous Crandall 25 years later” – “even a design as primitive as this made a contribution”.
Like the authors of A Condensed History of the Writing Machine (1923), I find “A rather unsatisfactory illustration [in the Robert Thomas patent] gives very little insight into the character of the Thomas invention”. In other words, I can’t make anything out from it. 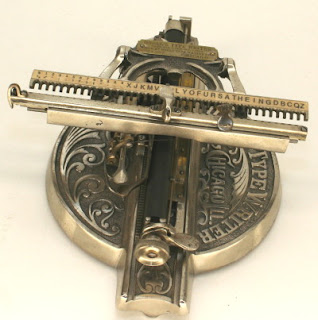 But I am more than happy to accept Paul Lippman’s judgement that this became the Pearl. And the Pearl, quite possibly, begat the Sun and the Sun begat the Odell (above), which begat the New American (below). 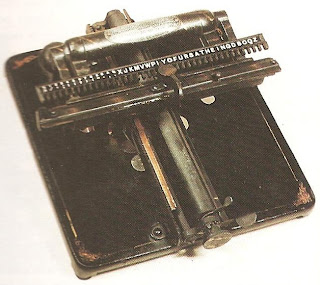 The one thing we didn’t get was the Henry J. Thomas typewriter. Pity.
As for the lineage, Adler begs to differ with Lippman. But then Adler doesn’t mention the Thomas Pearl. Of Odell’s New American-International, Adler wrote, “The exact relationship between these various brands has not been fully established, although it is inconceivable that rival companies would have been permitted to market with impunity what was essentially an identical concept, given the raging patent wars which were constantly being waged over even the most minor infringements.
“The inventive genius of Lee S. Burridge in 1885 (second patent below) appears to deserve the credit for the first patent … Odell arrived on the scene with a comparable design two years later.” 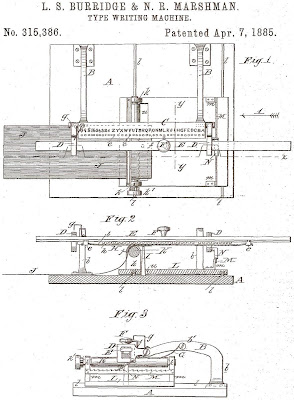 Adler goes so far as to say the New American was “based again upon Lee Burridge’s 1885 patent”. He called all three Odell designs "mechanically identical if aesthetically different” to the Sun.
Lippman, at least on this point, agrees with Adler. But he also says the Odell design is “almost identical to that of the Pearl and the Sun index machines". 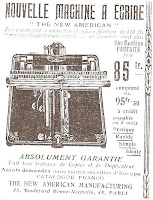 Rehr is on Lippman’s side in all this. He calls Robert Thomas’s design “workable” and says “several other index machines were later built on related principles …”
Paul Robert at the Virtual Typewriter Museum says “there are so many similarities between [the Sun] machine and the Odell that coincidence seems to be very unlikely. The straight type bar, the handle on top of it, the spacing mechanism, even the order of the characters on the index was used on the Odell."

The New Zealand beekeeper who conquered Mt Everest, Sir Edmund Hillary, was born in Auckland on this day in 1919. He died, aged 88, in Auckland on January 11, 2008. 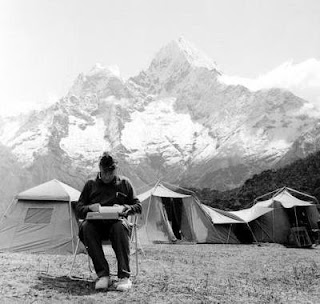 We still don’t know what type of portable Hillary used in the Himalayas (picture above) but we now know for sure he wasn’t the first to take a portable typewriter into those mighty mountain ranges: 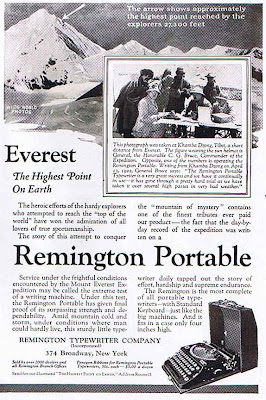 The American author Cormac McCarthy, he of the very expensive if work-worn Olivetti Lettera 32, was born the more common-or-garden Charles McCarthy in Providence, Rhode Island, on this day in 1933. He turns 78 today. 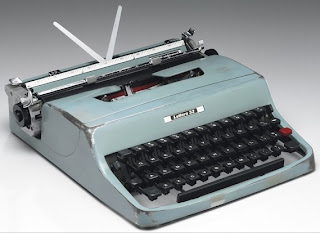 The late American actress Natalie Wood was born Natalia Nikolaevna Zakharenko in San Francisco on this day in 1938. She accidentally drowned at Santa Catalina Island, California, on November 29, 1981, aged 43. 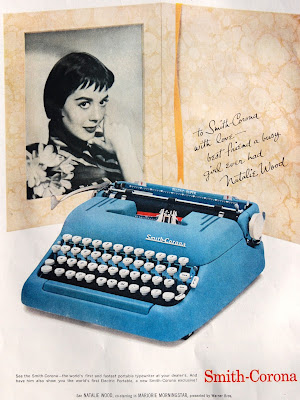 Posted by Robert Messenger at 01:27