On This Day in Typewriter History (LXII) 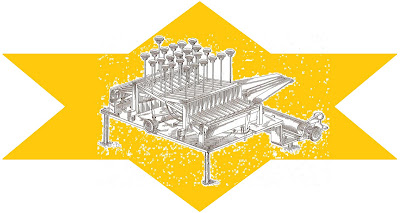 We have mentioned Charles Spiro in this series before, but since it’s Ernest Hemingway’s birthday, and Hemingway loved typewriters, it seems appropriate to also salute a true artist among typewriter inventors.
Thirty-five years ago I followed in Hemingway's footsteps, from Paris to Pamplona, from Coen to Cuba. I've grown up a little since then, gotten a bit more sensible. Now I'd gladly give me left foot to own a Spiro Columbia. 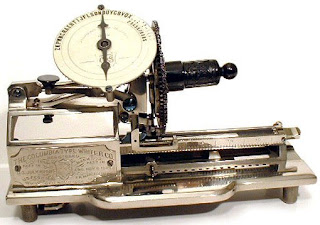 Columbia images from Martin Howard's Collection
Spiro, invariably referred to by typewriter historians as a “New York watchmaker”, couldn’t have had too much for making watches, since he patented at least 12 typewriter designs between 1885 and 1895. That’s not including many patents for various typewriter components, extending into the early 20th century.

Michael Adler in Antique Typewriters (1997) claimed Spiro “accumulated as many different patents for minor improvements in design as possibly anyone in typewriter history.”
Adler says Spiro invented eight typewriters in all, “of which several made headlines”. 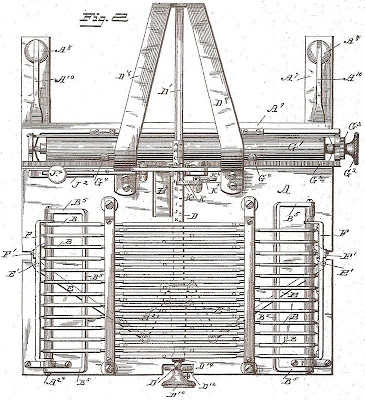 To the best of my knowledge, the patent with which Spiro was issued on this day in 1885 (above) was his first. He had applied for a patent for an earlier design, on September 26, 1884, but this one appeared to have been the first he was granted. 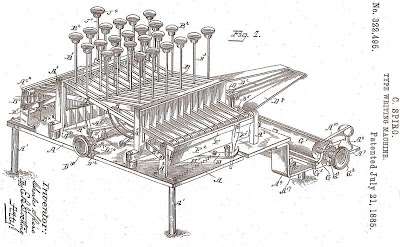 And it’s obviously not for the Columbia index, one of the typewriters for which Spiro is most famous. Patents for the genesis of the Columbia were first issued a week after this one, on July 28, 1885. Spiro continued to improve the Columbia through 1886 to 1889. 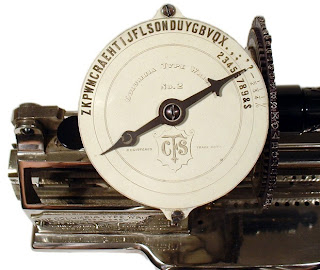 By the late 1880s, he had moved on to the Bar-Lock, below, arguably his greatest achievement, his masterpiece. Other typewriters which benefited from Spiro’s magic touch were the Visigraph and the Gourland, both after the turn of the century. 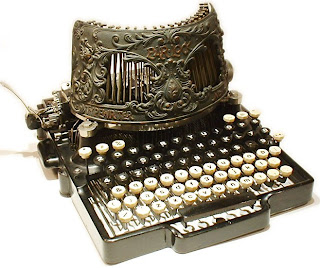 In referring to the Columbia index, A Condensed History of the Writing Machine in 1923 quaintly described Spiro beavering away “in a little shop on Center Street in New York City”.

“He is one of the very few early typewriter inventors still living and it is the especial pleasure of the writer of this condensed history to thus publicly present the compliments of the entire industry to this veteran.
“Charles Spiro is deserving of much credit for the prominent part he played in [the] development of the writing machine and the opportunity he thereby helped to create for the many other office appliances whose existence are today directly accessory to and dependent upon the typewriter.” 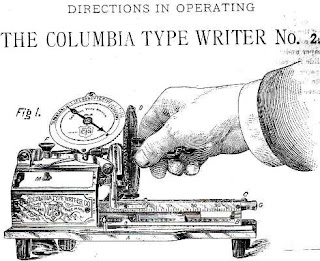 This tribute to Spiro included the claim that the Columbia index “was the first machine with visible writing placed on the market”. Adler  says the Columbia was also the ”first on the market with full differential spacing”. “[John L. Jones had also tried it, of course, but can hardly be said to have mass produced, backing 1852”. 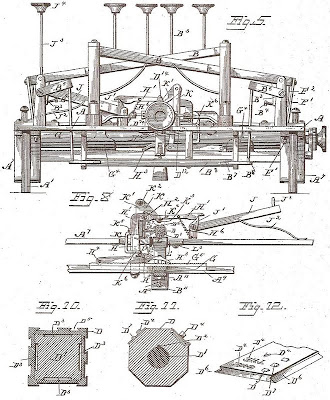 Adler twice makes reference to the patent (above) under our microscope today. “Not all of [Spiro’s] efforts were successful, however, and those that were patented but not produced include an 1885 linear index machine using a keyboard ….” 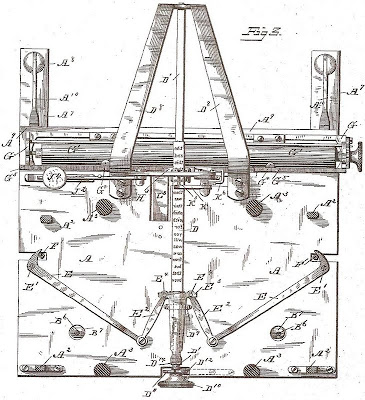 It appears to me there was even more to this design that it being a linear index with keyboard control. On the typesleeve (above) can be seen complete five-letter words, something which appears to be even more ambitious than the one-touch compete-word typing we looked at yesterday, as proposed by Henry J. Thomas in 1886 and a few years later by George Blickensderfer.
In his specifications for this patent, Spiro explained his objectives included fewer parts, simplification of parts, compactness and “the exposure of the letters and words printed at the time of and after the printing of the same without moving any portion of the machine …”
He also sought an ease of carriage and font change, and “The provision of variable spacing”. As well, the typewriter would have the "means whereby complete words may be printed by the single operation of a single key..." 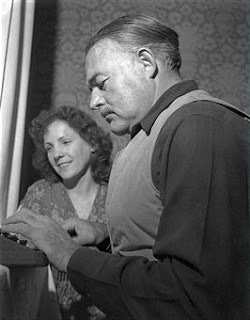 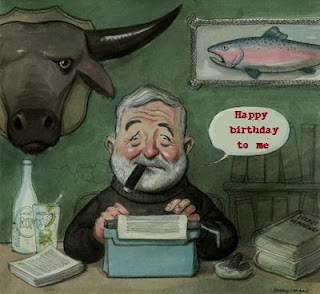 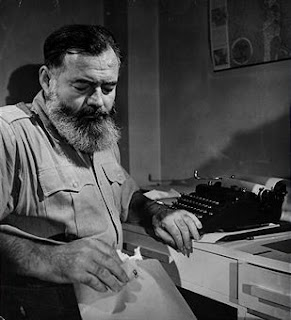 There are about the same number of photographs of Hemingway at a typewriter as there are Hemingway typewriters on display in his old homes and haunts, in Havana, Key West, Florida, and Ketchum. 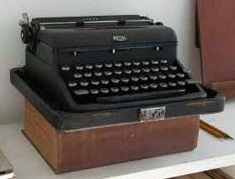 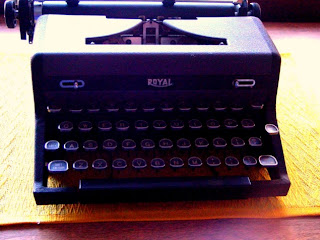 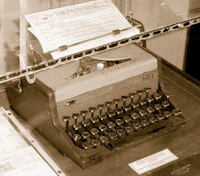 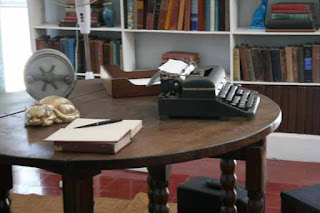 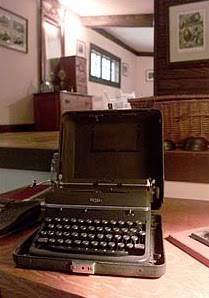 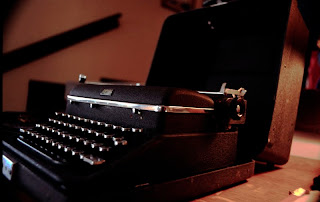 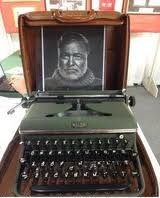 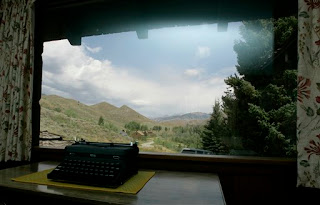 There has also been the odd claim about Hemingway typewriters for sale on eBay (How many typewriters did the man own?). 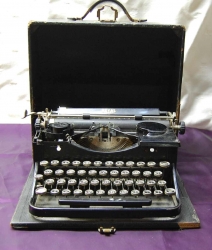 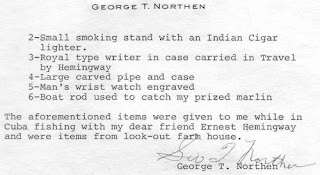 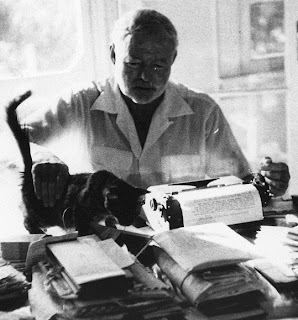 On this died in 1933, the novelist, essayist, literary critic and university professor John Gardner was born in Batavia, New York. He died in a motorcycle accident in Susquehanna County, Pennsylvania, on September 14, 1982, aged 49. 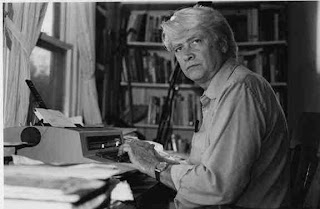 Posted by Robert Messenger at 21:52