On This Day in Typewriter History (LXX) 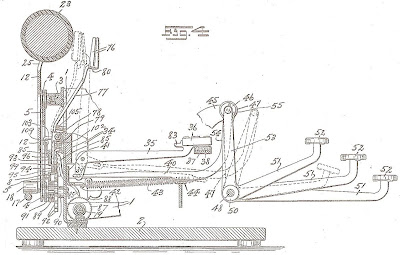 Given he is someone who patented at least 29 typewriter inventions, 25 of them in a concentrated eight-year period between 1909-1917, typewriter historians have strangely ignored Clio Brunella Yaw.
But, then, Clio B. Yaw is something of a mystery man. Born in New York in October 1869, he was living in Milwaukee at the turn the century. On the 1900 US census, he put down his occupation as simply “typewriter”. Perhaps, at that time, he was no more than a typewriter salesman.
Yaw later travelled overseas, returning to New York from Liverpool in England in 1908. During the next 14 years, he seems to have been fully occupied inventing improvements for typewriters, mainly for Remington and for Wyckoff, Seamans and Benedict.
Yet he also found time to independently design his own typewriters, and the patent we are looking at today, for which Yaw filed an application on this day in 1916, is for a most intriguing folding portable typewriter (it was issued on January 22, 1918). At first glance, it looks like a simple adaption of a Blickensderfer, but it turns out there is much more to it than that.
There is at least one Yaw typewriter in existence, called a Yaw-Way, but this is apparently a prototype based on a Monarch standard office machine, with a slotted segment. A photograph of this typewriter was featured in ETCetera magazine last December, and was listed as belonging to Bert Kerschbaumer. The caption said that Bert had restored it. The Yaw-Way was described as “an experimental machine from the former Remington collection designed by C. B. Yaw”. 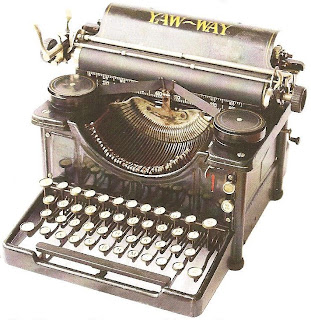 I don’t know if it is the same machine, but a Yaw-Way was also advertised by Uwe Breker as a “Prototype: Yaw-Way made by C. B. Yaw, with special segment shifting, ball bearing type bars. Single ball pivot. Frame and carriage by Monarch. Obviously never produced in series. No front cover and platen! With original museum tag!” 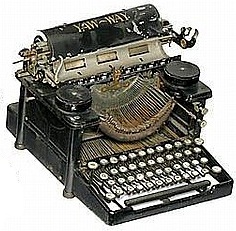 From what I can discover from patent records, Yaw’s output was amazing, and must place him right up there with the like of Ed Hess, Richard Uhlig and Charles Spiro as one of the most prolific typewriter inventors in history.
Here is a brief breakdown: 1909 WSB, Remington (2); 1910 WSB (5); 1911 WSB (2), Remington; 1912 WSB, Remington; 1913 WSB, Remington; 1914, Remington; 1915 Remington; 1916 Remington (2); 1917 Remington (3); 1918 the portable we are looking at today; 1919 Remington(2); 1922 Remington.
Yaw was also versatile. He designed a combined typewriter-adding machine in 1915 and a typewriter cabinet in 1917, both for Remington. And in 1916 he designed a Planograph: indeed, an undated music publication lists Yaw as a Milwaukee music instrument maker.
The little else we know about Yaw is that he was married to a Jo Evangeline Wilcox Yaw and the couple had six children: Donald Bellamy Yaw, Nellie Besant Yaw, Roma Vergy Yaw, Mae Avis Yaw, Flora Eva Yaw and Arthur Newton Yaw.
As well as his time spent in Milwaukee, Yaw lived in various parts of New York and New Jersey, including Arlington when he applied for this patent in 1916 and for the typewriter-adding machine in 1911. But in the 1892 New York census, and again in the 1920 US census, he was in Herkimer. As for the 1930 US census, the whole family seems to have vanished! 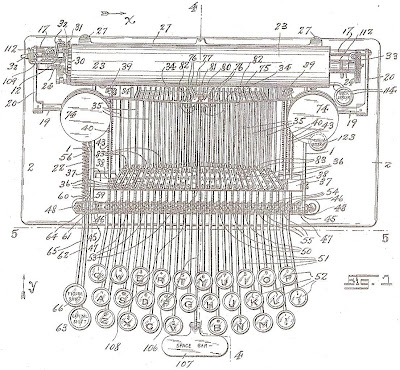 Yaw, in case you are wondering (as I was), is a surname which has its origins in either Ireland or England, or both. In may be a reduced and altered Anglicised form of Gaelic the Irish Mac Eochadha (McGaffey, McGeough). In England, it was a topographic name for someone who lived near a stream, derived from the Old English word ea (stream, river), which became ya or yo in the Middle English dialects of Somerset and Devon. It was also an occupational name for the yeoman of an estate or an attendant in a noble house. The name later came to mean a freeholder under the rank of gentleman.
What is even more interesting is that Clio is normally a female name, coming from Greek mythology (Greek: Κλειώ or Kleio). Clio was the muse of history, a daughter of Zeus and Mnemosyne. She is often represented with a parchment scroll or a set of tablets and is also known as the Proclaimer. The name is from the root κλέω/κλείω, meaning "recount" or "make famous".
Clio Yaw certainly did his best to make his name famous, but to no avail – at least not in his case.
It seems astonishing that such a prolific typewriter inventor does not appear to rate a mention in Oden (1917), A Condensed History of the Writing Machine (1923), Bliven (1954), Adler (1973), Beeching (1974, 1990), Masi (1985), Lippman (1991), Rehr (1997), Adler (1997), Russo (2002) or Robert (2007). ETCetera’s only reference is the one to the Kerschbaumer Yaw-Way machine. 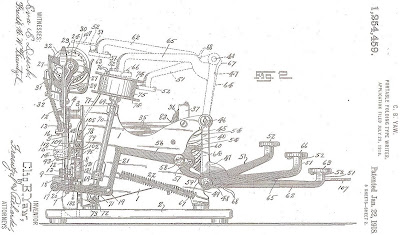 The fascinating thing about Yaw’s 1916 folding portable typewriter design is that his plan was to differ from the Standard Folding-Corona 3 (carriage folds forward over the keyboard), and the 1917 Fox (carriage folds down and behind).
Yaw’s idea was to have the keyboard fold up over the carriage. Yet it’s possible Fox’s patent problems with Corona, which cost Fox dearly, may have deterred Yaw from going into production with his design. 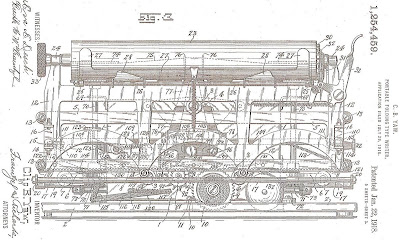 His specifications for the portable states, “the invention relates … to a novel construction of portable folding typewriter. [It] has for its principal object to provide a very cheap, simple, compact and lightweight portable typewriter, so constructed as to be capable of being folded in a novel manner to reduce its bulk when not in use, and so that the same may be easily and conveniently carried from place to place by the user.
“The invention has for its further object to provide a novel arrangement and combination of typebar actuating mechanism regardless of the utility of the same as a foldable construction, whereby a novel interconnection of keybar and typebar is provided which is useful in non-folding as well as in folding typewriters.” 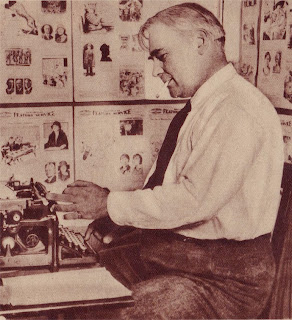 The American humorist, journalist and author Donald Robert Perry Marquis was born on this day in 1878, in Walnut, Illinois. 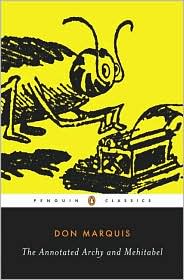 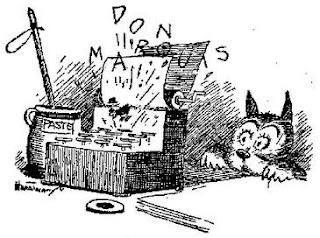 Marquis was variously a novelist, poet, newspaper columnist and playwright.

He is remembered best for creating the characters "Archy" and "Mehitabel", supposed authors of humorous verse.