On This Day in Typewriter History (CIII) 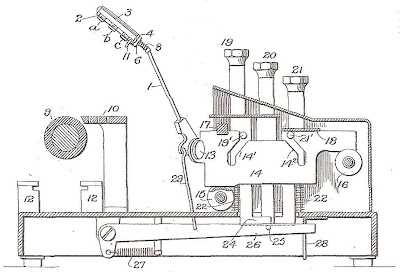 To start with, in the 34 years between 1891-1925, Tyberg was as persistent in his efforts to produce typewriters as Yost (above) had been from the time he joined the Sholes-Densmore team in Milwaukee in late December 1872 until he died, on September 26, 1895. Admittedly, Tyberg was nowhere near as successful as Yost had been in his typewriter work. Indeed, although he had established his own Tyberg Typewriter Company in New York toward the end of the 19th century, Tyberg appears to have been utterly unsuccessful.

And this is also in spite of the fact that Tyberg, like Yost before him, had been keen to associate himself with real typewriter inventing genius. In Tyberg’s case, he linked up with Edward Bernard Hess in 1898. Hess (above), regarded as one of the greatest typewriter inventors of them all, would later found the Royal Typewriter Company. While Hess relied heavily on the engineering talents of Lewis Cary Myers, Yost had in his own endeavours used a vast array of very able mechanical engineers and designers, from Alexander Davidson to Franz Xaver Wagner. 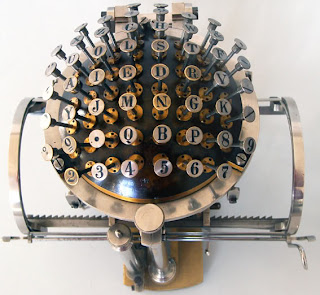 Yost, too, would undoubtedly have known of the Malling Hansen writing ball, which had been patented in the US on December 17, 1878. This ingenuous device was the work of Hans Rasmus Malling Johan Hansen (below), from Tyberg’s native city of Copenhagen, and Yost had probably developed some regard for the skill of Danish typewriter inventors.

But fourthly, and most importantly, Tyberg was, like Yost, a follower of Helene Petrovna Blavatsky, co-founder of the Theosophical Society. 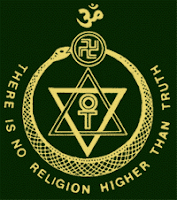 What’s more, Tyberg became a leading light in the society, and he and his wife Marjorie Marion Somerville Tyberg were highly influential figures at the society’s US compound at Point Loma, San Diego, California (below). 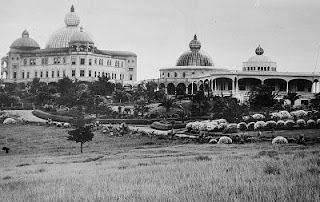 Tyberg was from 1934 until his death in August 1941, president of Theosophical University.
The Tybergs daughter, Judith Marjorie Tyberg, (“Jyotipriya”, below, born May 16, 1902, died October 34, 1980), a direct disciple of Sri Aurobindo and a Sanskrit scholar, founded the Sri Aurobindo Center of Los Angeles in 1953. 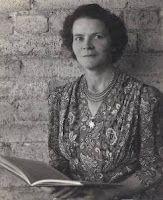 In 1900, the “Purple Mother”, Katherine Augusta Westcott Tingley (below), a close ally of the Tybergs, moved the headquarters of the Theosophical Society to “Lomaland”, establishing the Universal Brotherhood and Theosophical Society on a hilltop campus overlooking the Pacific Ocean. 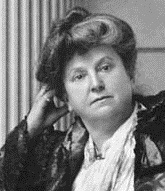 The facility, with its unusual architecture and even more unusual lifestyles, became an important source of music and culture for residents of San Diego until 1920. 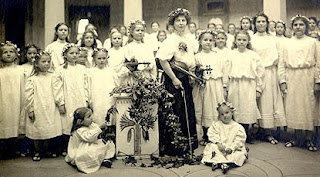 It incorporated the School for the Revival of the Lost Mysteries of Antiquity and the Raja Yoga Academy, with boarders living in group homes called Lotus Houses. 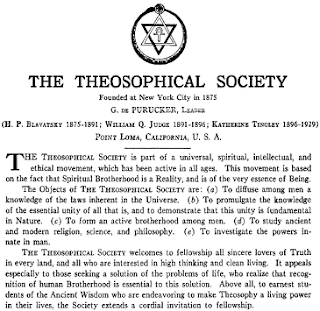 The society experimented with planting trees and crops, giving that formerly barren part of Point Loma its heavily wooded character. They are credited with introducing the avocado to California. 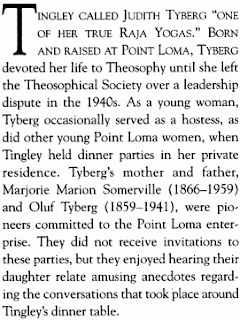 Yost, it may be recalled from an earlier post (see http://oztypewriter.blogspot.com/2011/06/on-this-day-in-typewriter-history-xxi.html) had in late 1895 “communicated” with Blavatsky, via a Yost typewriter, from their respective graves. The spirit of the spiritualist Madame Blavatsky (below), who had died more than four years earlier - in London on May 8, 1891 – had “dictated” the text of her posthumous memoirs (described as “furnishing strong, internal proofs of its apocryphal character”) and this was “obtained in independent typewriting on a Yost machine under the supervision of the spirit of its inventor, Mr G. W. N. Yost”.

The dead Yost’s transcription of the dead Blavatsky’s words led to the publication in 1896 of Posthumous Memoirs … Dictated from the Spirit-World under the Supervision of G.W.N.Yost, by Joseph Marshall Wade, of Boston. 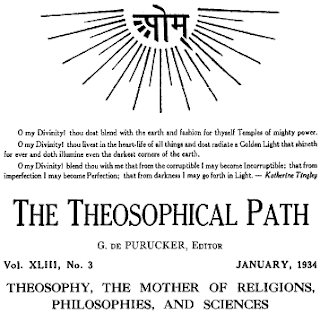 Broadly, Theosophy attempts to reconcile humanity's scientific, philosophical and religious disciplines and practices into a unified worldview
Olaf Tyberg was born in Copenhagen on October 7, 1859, the son of Hans Christian Tyberg and his wife Juliana Marie Poulsen Tyberg. He migrated to the US in 1880, married Somerville in 1890 and became a naturalised US citizen in 1896. He was still a subject of the King of Denmark, though living in Brooklyn, when he applied for his first typewriter patent, in 1891.
In his late life, Tyberg wrote The Science of Nature, which, though incomplete, was published in 1944 by the Theosophical University Press. The preface to this work, written by Henry T. Edge, described it as “a plea for studying nature as a whole”.

It said Tyberg was “pre-eminently equipped” to put his case forward as “a mechanical engineer by profession [who] had won high encomiums for his profound and accurate knowledge of mathematics, pure geometry, and physics. So much for one side of his capacious mind: on the other side he had been a profound student of philosophy both ancient and modern, as will at once be seen from his writing.”
“We have to express our regret that increasing infirmities due to his advanced age prevented him from completing his work."
In this group photograph taken at Point Loma, Oluf Tyberg can be seen standing 11th from the right. Katherine Tingley is seated, centre. 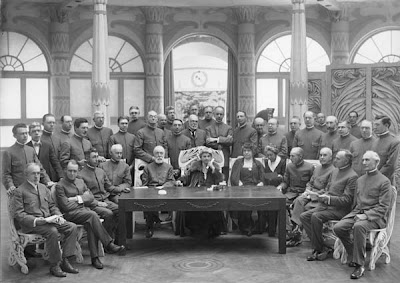 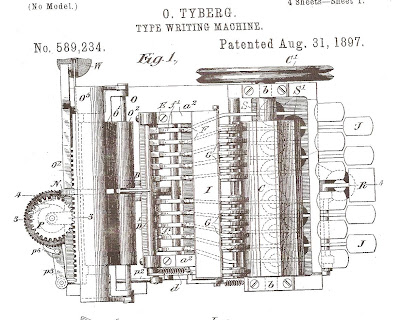 His first application was made in 1891, for a “typewriting machine in which a normally-stationary type-carrier is operated by a continuously-moving driver through mechanism normally out of operative connection with the driver, but connected therewith at the will of the operator to bring the desired character on the type-carrier into printing position. I have also shown … mechanism for operating the carriage from the driver and mechanism for operating a hammer controlled by the type-carrier-operating mechanism”.
It’s all double Danish to me, I’m afraid. 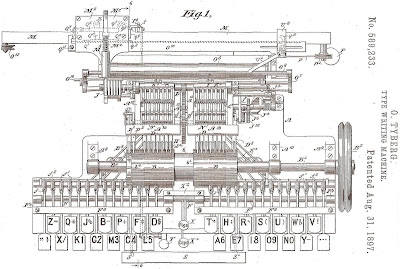 Tyberg added, “In general my object is to actuate, as far as possible, all the mechanism necessary to effect the printing of characters on a sheet of paper from a power-driven device or driver, the operating-keys being employed merely to cause different parts of the mechanism to be brought into operative connection with the driver.” 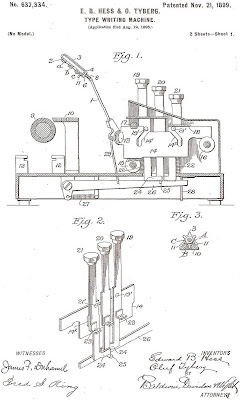 In 1898, Hess and Tyberg assigned to the Century Machine Company of New York a patent for mechanisms which applied to earlier designs by Hess himself (with Joseph M. Stoughton) and also by another of the truly great typewriter inventors, Lee Spear Burridge. 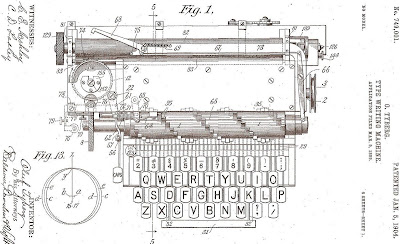 This was for “that class of typewriting machines in which pivoted type-bars are each provided with a plurality of type or characters arranged longitudinally thereon and each bar operated upon through the medium of a plurality of finger-keys, one for each character, and one or more of which impart to the type-bar a motion around its pivot, and longitudinally or in the direction of its length to bring the desired character to the point of printing or impact upon the platen.” 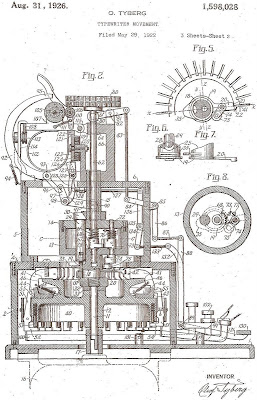 Tyberg went solo again to improve on this design in 1899.
He then abandoned attempts to produce a typewriter until after he had moved to Point Loma. 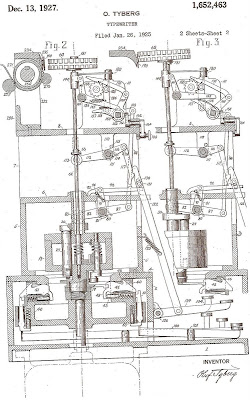 In 1922, he tried to “produce a series of new mechanical movements by means of which it shall be possible efficiently to control the printing action of a type-carrier, which by the aid of some auxiliary power is normally in a continuous state of motion, and thus to construct a typewriter or similar device capable of being operated with certainty, ease and speed”. 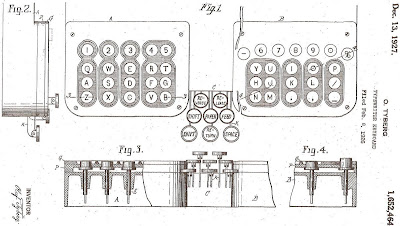 These efforts continued through 1925-1928. On this day in 1926 (see patent drawing with Theosophical Society symbol-like mechanism above), Tyberg said he wanted to “construct a keyboard in such a manner that all the automatic motions of a machine of this nature can be controlled by the operator with the least possible motion of the hands.” The object was “embodied in a new and useful grouping of the printing-keys, that will make their operation by touch easier to master, and which will generally tend to improve both speed and accuracy". 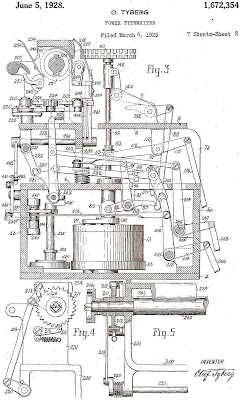 Posted by Robert Messenger at 12:11

Somehow I am tickled by the idea of a theosophist working on machines for typing and cigar-making.

Hi Richard. Thanks. Yes, I found this combination a bit incongruous.
I do sleep sometimes between writing this stuff and my bedtime reading last night revealed that, in his later life, Sholes also became something of a spiritualist. Seems to be fairly common among 19th century typewriter inventors. Maybe, after all, typewriters were conceived in heaven.