On This Day in Typewriter History (CXVII)

SEPTEMBER 14
THE TYPEWRITER RIBBON:
FROM ALEXANDER BAIN
TO GEORGE KERR ANDERSON
The Scots Have It All Tied Up! 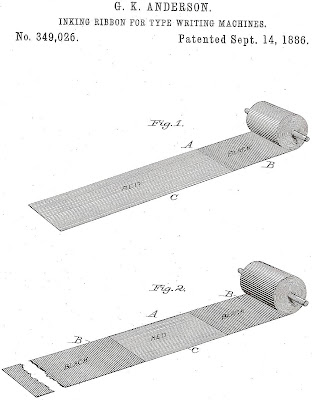 Much has been made of the fact that the first patent for a typewriter ribbon was issued on this day in 1886, to George Kerr Anderson of Memphis, Tennessee.
It would be very obvious to every typewriter lover, however, that typewriter ribbons had been used for a long time before Anderson applied for his patent, just after Christmas in 1884.
For example, the Sholes and Glidden, which reached the market on July 1, 1874, used a ribbon. Christopher Latham Sholes had first used an inked ribbon on one of his earliest prototypes, in 1867, almost two decades before the Anderson patent was granted. Subsequent early typewriters, such as the Remington 2, Caligraph, Crandall and Hammond, all used ribbons, all in the years before Anderson’s patent.
Nonetheless, in the years before Anderson's "invention", the use of an inked ribbon in a typewriter did cause some problems. In his 1997 book Antique Typewriters, typewriter historian Michael Adler drew some imaginative word pictures of how it was done: 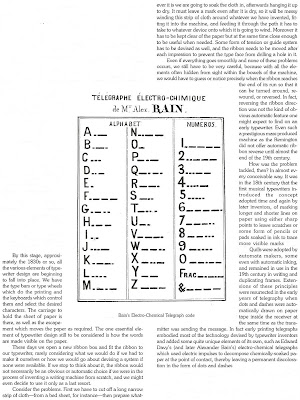 Adler is adamant that the first typewriter ribbon embraced in a patent was incorporated in Alexander Bain’s design for a railway telegraphic machine, issued on December 21, 1841.

Adler, Antique Typewriters (1997)
This British patent, No 9204, was issued jointly to Bain and a Royal Navy lieutenant, Thomas Wright, of Percival Street, Clerkenwell, London, for an “Application of electricity to control railway engines and carriages, mark time, give signals and print intelligence at distant places”. The first telegraph lines were installed alongside the railway between Edinburgh and Glasgow. 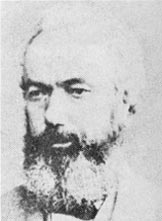 Alexander Bain (above) was an instrument maker, inveterate inventor and clockmaker best known for inventing what became the fax machine and the electric clock. He worked on the automatic telegraph and also invented an earth battery, insulation for electric cables and an electric fire alarm, as well as work on inkstands, ink holders and a device to measure the speed of ships. 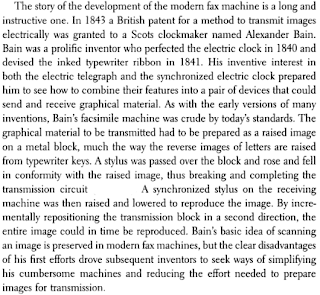 Bain and his twin sister Margaret were born in October 1811 in the village of Thurso, north Scotland, the son and daughter of a crofter and two of 13 children. Bain grew up in a remote stone cottage at Leanmore, north of Wick, and went to school in Backlass. At age 12 he went to hear a penny lecture on science, something which was to have a profound influence on his future. 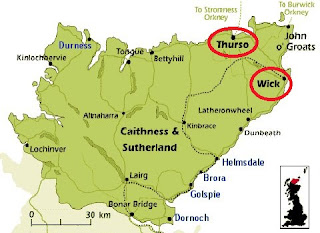 Bain started work in Wick (below) as an apprentice clockmaker, then moved to Edinburgh and from 1837 worked as a “mechanist” at Wigmore Street, Clerkenwell, London.

He was working on an electric clock, but had sufficient funds to take it further. Eminent scientist Sir Charles Wheatstone advised Bain the idea was not worth pursuing, and three months later Wheatstone demonstrated an electric clock to the Royal Society, claiming it to be his own invention. Unfortunately for Wheatstone, Bain had already applied for a patent. It was granted, jointly with chronometer maker John Barwise, on January 11, 1841. The legal wrangle that followed caused much damage to Wheatstone's reputation and led to a compensation payment to Bain large enough to set him up in business. However, many of Bain’s patents are jointly issued, reflecting his abiding lack of finances, something which afflicted his inventing throughout his life.

On May 27, 1843, Bain patented the use a clock to synchronise the movement of two pendulums so that a message could be scanned line by line and printed remotely. The first commercial fax service, with what were called pantélégraphes, was opened between Paris and Lyon in 1865.
On December 12, 1846, Bain patented a chemical telegraph receiver to go with his punch-tapes (nicknamed “ticker tape” because of the ticking sound the telegraph made) to improve the speed of transmission of Samuel Morse telegraph technology. The chemical telegraph was tried between Paris and Lille before a committee of the Institute and the Legislative Assembly. The speed of signalling reached 282 words in 52 seconds compared to Morse’s 40 words a minute. But it incurred the hostility of Morse (below), who obtained an injunction against it on the slender ground that the running paper and alphabet used were covered by his patent. 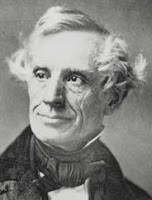 In 1847 Bain devised an automatic method of playing on wind instruments by moving a band of perforated paper which controlled the supply of air to the pipes.
Bain lived briefly in New York, between 1862-1864, when he took out two US patents, for which his backer was William H. Allen.
In the US, Bain soon lost whatever money he had made from his inventions and returned to England to live the life of a virtually destitute “gentleman” at Beevor Lodge, Hammersmith, London. Fellow scientists, seeing Bain in extreme poverty, in 1873 petitioned British Prime Minister William Gladstone to grant Bain a Civil List pension of £80 a year. The Royal Society had previously made him a gift of £150. 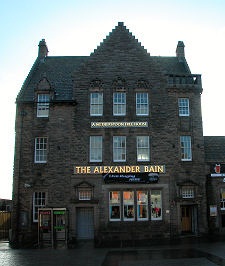 Bain died in the Home for Incurables at Broomhill, Kirkintilloch, on January 2, 1877, aged 65, and was interred in the Old Aisle Cemetery. He is remembered in the name of a pub (above) which stands close to where he served his apprenticeship in Wick and in the name of British Telecom's main building in Glasgow, Alexander Bain House. 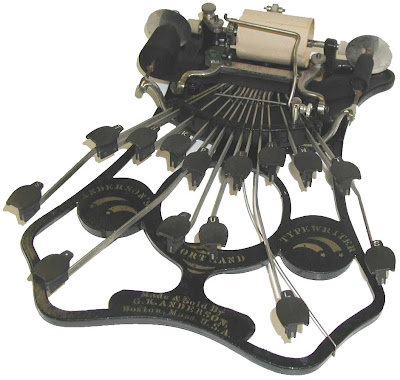 Anthony Casillo Collection
Anderson’s 1884 invention was to provide portions near the ends of a ribbon with a colour contrasting from that of the body of the ribbon. This was intended to notify the operator of the typewriter to manually change the direction of the ribbon feed.
But among typewriter historians, Anderson is much better remembered for his shorthand typewriter, (above), which was used to report President William McKinley's inaugural address on March 4, 1897. 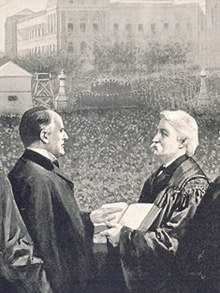 Anderson's first attempts to produce a shorthand machine were modifications of the typewriter (below), but he soon discarded the concept of writing only one letter at a stroke and turned to the development of "word-at-a-stroke" machines. 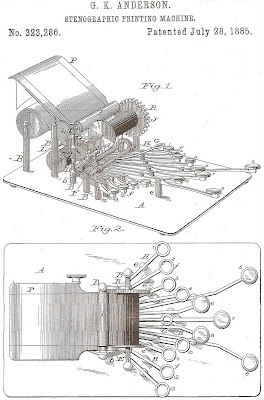 The 14-key keyboard represented letters that occur most frequently in the English language, arranged in three sections controlled by shift keys, and there was not a common striking point for the keys as in the typewriter.

The machines printed characters across a two-inch roll of paper, and each face had its own position on the paper. The Anderson shorthand typewriter allowed two or more of its keys to be depressed simultaneously.

Anderson's invention was an efficient and simple device that could produce copy which could be read by anyone without previous study. He sold his machine by mail order, but it was not a commercial success. 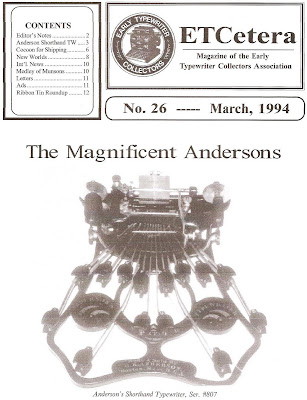 In an extensive article on the Anderson shorthand typewriter in the March 1994 edition of ETCetera (No 24), Darryl Rehr quoted Anderson from a letter Anderson had written to The Phonographic World in 1892, in which Anderson discussed his earlier typewriter design:
“The ‘Reporting Machine’ patented by me in 1885, was soon after transferred to a stock company, which buried it so completely that it has never been heard from since … my first ship having been ‘scuttled by its crew’, I have given stock companies a wide berth, and no corporation, wealthy or otherwise, has invested one cent in ‘pushing’ the ‘Shorthand Typewriter’.” 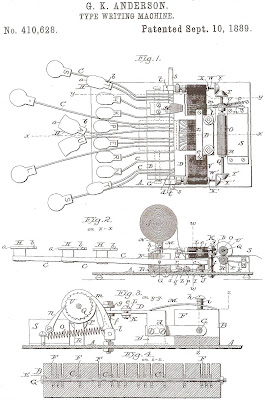 The second design (above) was patented in 1889, and there was a later folding model.

In 1942 The National Shorthand Reporter described the Anderson typewriter as “undoubtedly the most fascinating shorthand machine ever invented, for it made possible the recording of speech in notes that could be read by any literate person.” 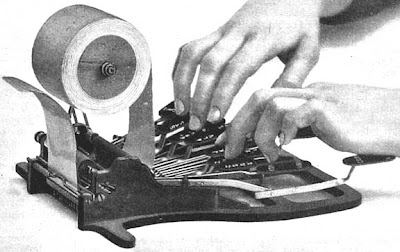 The National Shorthand Reporter said of Anderson, “From the time he applied for his first patent until the present – almost 60 years – he has been actively reporting conventions of all kinds, some of the most technical nature, and doing it well.”
George Kerr Anderson died on May 22, 1942, in Bayside Park, New Jersey, aged 78. 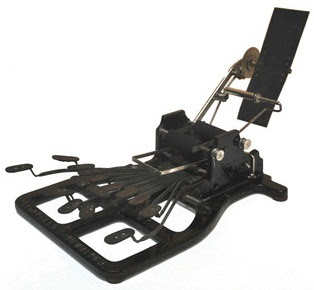 I am currently doing research on Swiss typewriter ribbon tins, and found this fine blog entry of yours. Thanks Robert!