On This Day in Typewriter History (CXII) 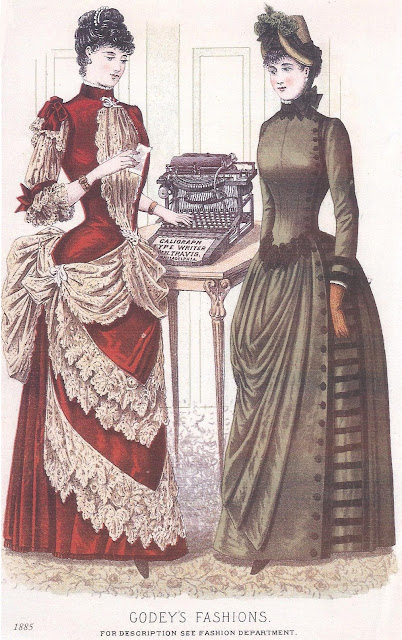 THE 18TH BEST REASON
TO BUY A CALIGRAPH

TAKING ALL THE CREDIT
WHEN ONLY SOME IS DUE
George Washington Newton Yost was never adverse to making full use of someone else’s expertise when it came to putting together a typewriter. Naturally, he invariably put his own name to the “invention”, as joint patentee or otherwise, though it is unlikely he had ever himself actually devised any technical aspects of Yost-related machines. 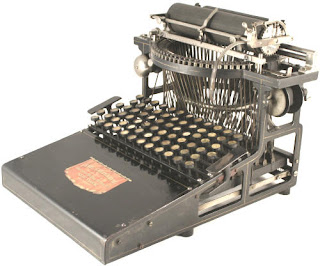 As the brains behind the various Yost projects, and as principal backer (usually with promises of payment, or money other than his own), he obviously felt this was his right.
As Richard Current put it in his book The Typewriter And The Men Who Made It (1954), “Not that Yost was an original inventor, but … he certainly had a talent for carrying out the hints of other men, adapting and varying old devices so as to make them look new, and then assembling and ‘prettying up’ the whole collection.”

When, in this month 130 years ago, Yost’s Caligraph went typewriter-to-typewriter with the Remington in the marketplace, Yost promoted the new model as “A perfect writing machine … invented and manufactured as an improvement on the Type-Writer [Remington] by the man who made that machine what it is”.
In other words, Yost “made” the Remington what it was – not Sholes, not Glidden, not Soule, not Schwalbach, Densmore, Barron, Jenne, Clough, Wagner or Brooks or the multitude of others who were involved in getting it successfully built – but Yost, and Yost alone! 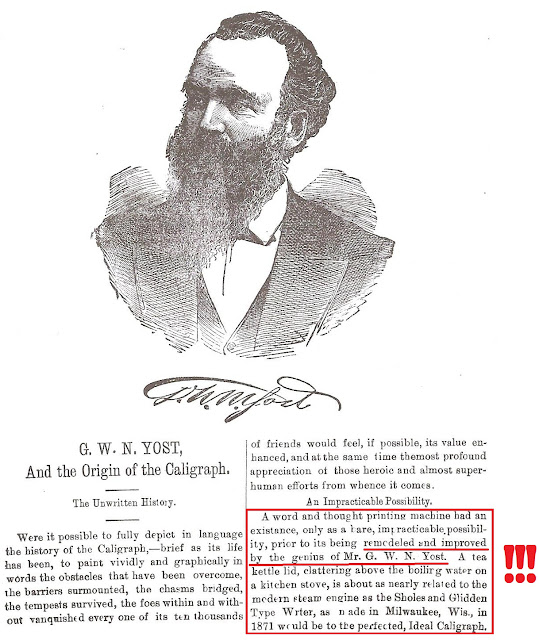 In the case of a ribbon mechanism improvement for his Caligraph, patented on this day in 1884, Yost leaned on the skills of Boston jeweller and watch maker William H. Bracy (born Peabody, Massachusetts, 1852). 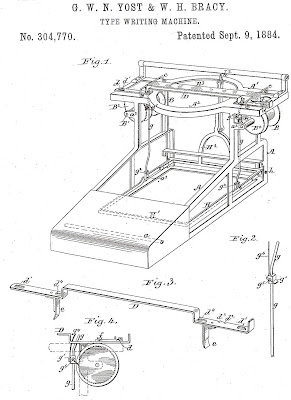 The patent describes a “peculiarly arranged” ribbon movement from spools on rachet-wheels actuated by pawls. It appears to be activated by the space bars, which with the Caligraph were on each side of the keyboard. For exactly what “peculiar” purpose, I cannot imagine. But the fact that it was jointly patented by Yost and Bracy, and assigned to Yost’s American Writing Machine Company, tells us more about the way in which Yost operated than the patent itself. 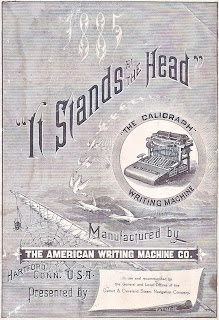 When Yost quit selling for the Remingtons in 1879, he formed the American Writing Machine Company and began to develop the Caligraph. For this, he worked on the basic design of the Sholes & Glidden/Remington, adding some of his own ideas for improvements and innovations, along with those of James Densmore, Densmore’s stepson Walter Jay Barron (born Walter John Barrows) and Franz Xaver Wagner. 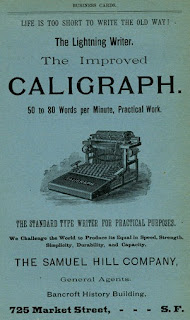 From Wagner’s earlier work for Remington, Densmore had come to the opinion that, next to Sholes, Wagner was the “most fertile” of typewriter inventors at that time.

Yost found ready finance from Edward Mead Johnson (above) and James Wood Johnson (below) for the American Writing Machine Company.

The Johnson brothers were temporarily out of the medical products business and seeking new investments. By 1881, Edward Mead Johnson was general agent for the American Writing Machine Company, with Yost as secretary and superintendent.

Yost leaned on Densmore (below) for permission to use designs based on Sholes patents, which were held by the Type-Writer Company.

Yost’s massive borrowings from Remington ($50,000, so Yost could buy Amos Densmore’s one-fifth share in the Type-Writer Company, plus $9000 owed by the company itself to Remington) had placed Densmore in a very precarious personal financial position.

But Densmore was persuaded to accept legal advice that, as trustee of bondholders of the Type-Writer Company, he could give Yost (above)the permission he needed to build the Caligraph. This was in spite of the fact that Remington was already paying the Type-Writer Company for “exclusive” rights to use the Sholes designs. 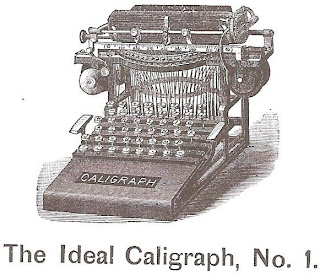 Densmore’s wife Adella had once told Densmore’s brother Amos, “You see how Yost mesmerizes James every time he gets near him.” 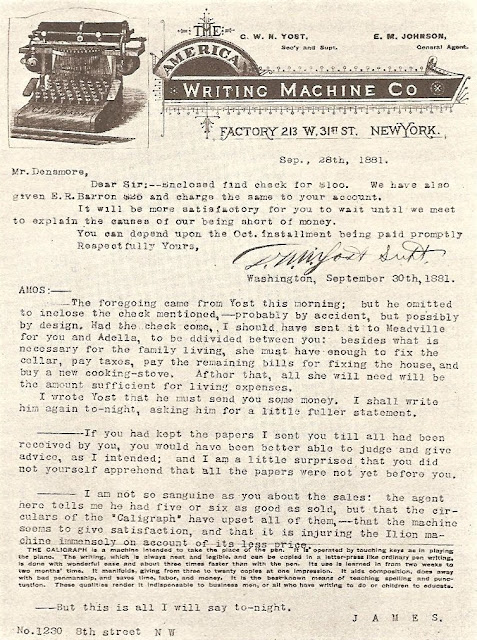 This letter of September 30, 1881, from James Densmore to his brother Amos, written on a Remington below a note from Yost written on a Caligraph, shows the sort of thing Densmore had to put up with: the "enclosed" $100 cheque from Yost was NOT ENCLOSED! By accident or design? wonders the "mesmerized" Densmore.

An agreement between Densmore and Yost to use Sholes patents held by the Type-Writer Company patents was signed on January 12, 1880, and the Caligraph was, from that date forward, on its way. With it, for the first time, there would be competition in the typewriter world. 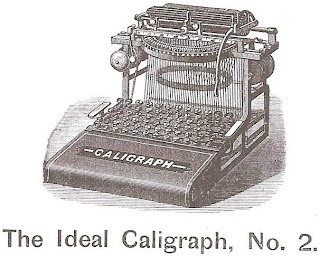 Yost rented premises on 213 West 31st Street, near Seventh Avenue, in New York, to manufacture his new machine and by the middle of 1881, the Caligraph was ready to be put on the market. 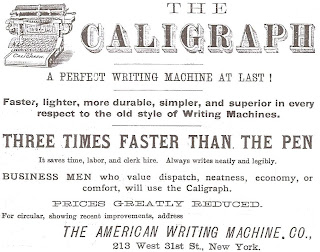 James Densmore, who gave the new machine its name (“beautiful writer”), had formed the belief that Yost’s Caligraph would prove to be commercially successful, and that both he and the Type-Writer Company would benefit enormously from the advent of this competition in the business. Sales of the Remington and the Caligraph would double the payments being received for patents rights. 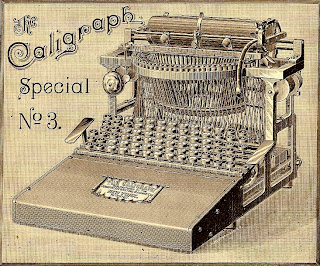 As might be expected, the Remingtons weren’t too impressed by any of this. In fact, says Current, they were “outraged”, and stopped making any payments to the Type-Writer Company. Law suits were threatened and, in order to placate them, the Remingtons demanded that ownership of all the Sholes patents be transferred to them – they were not interested in the Caligraph. Naively, it would seem, Densmore told his wife in February 1881 that he thought the Remingtons should “act a little decently”. 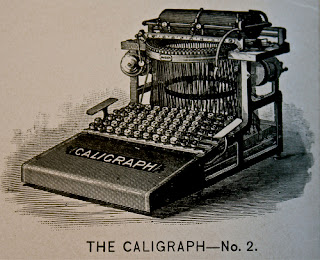 They didn’t – at least not within Densmore’s interpretation of “decency”. In June 1881, Remington won out, taking control of all Sholes patents from the Type-Writer Company. Under a new arrangement, the Type-Writer Company would receive just $3 for each Remington sold, after deductions of $3.50 in royalties to Sholes and others, and $3.50 for monies owed to Remington; plus an annual $2485 license fee from the American Writing Machine Company and $1 for each Caligraph sold. 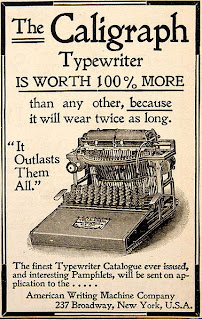 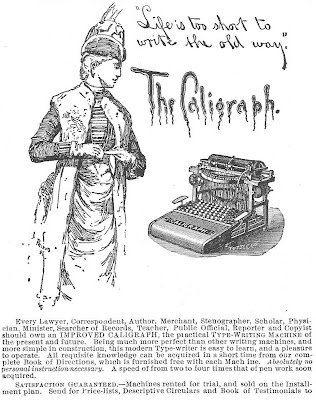 Compared to a Remington total of 10,800 machines sold between 1881—1884, Caligraph sold 7000 units in the same period. By the following year, Hammond, Crandall and Hall had more than doubled the market choice of typewriters.

Yost squabbled with the Johnson brothers, who pulled out of the enterprise, leaving their investment behind them. They went back to making medical products. 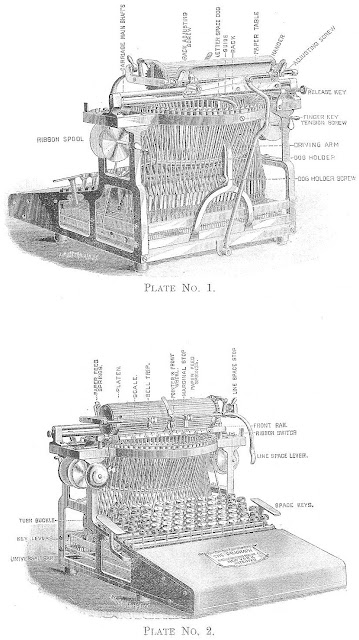 Yost moved production to his home town of Corry, Pennsylvania, and started again. Caligraphs were later produced in Hartford, Connecticut 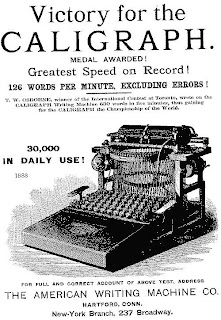 One legacy of the Johnson involvement with the Caligraph is said to have been a non-smudging typewriter ribbon with an India-rubber base. James Wood Johnson, an engineer, had designed and built machinery to mass produce India-rubber based medicated plasters. 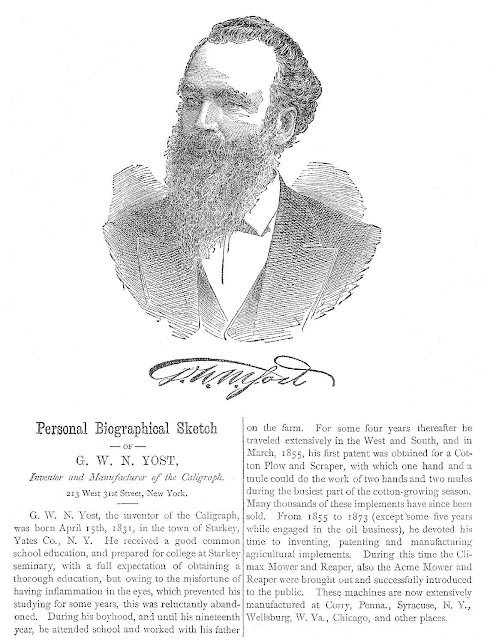 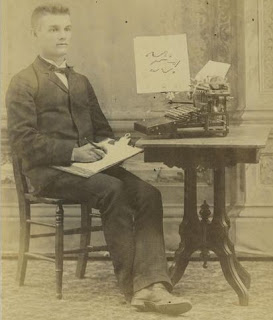 Here is stenographer and typewriter H. Edson Rogers, of Oronoque, Kansas, at his Caligraph at Battle Creek, Michigan, in 1888. 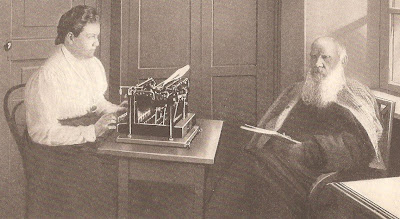 The great Russian writer Leo Tolstoy was born Lev Nikolayevich Tolstoy on this day in 1828 in Yasnaya Polyana, Russia. He died on November 20, 1910, aged 82, at Astapovo, Russia. He is seen here dictating to his daughter, Alexandra. Is it a Caligraph Alexandra is using?
Please seriously consider the excellent investment of Paul Robert's book on the Caligraph: 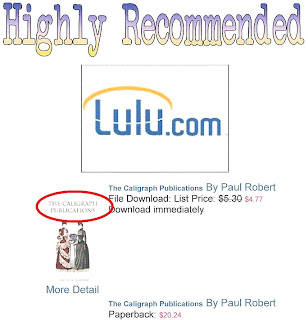 Finally, a “lamp fixture and mounting therefor” patented by William M. Stockman of New York on this day in 1958. 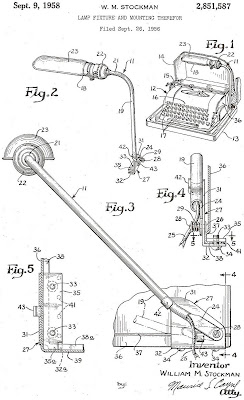 Surely it’s a long way preferable to what vandals are doing to typewriters these days, by welding lamps on to the segments of perfectly good old typewriters. 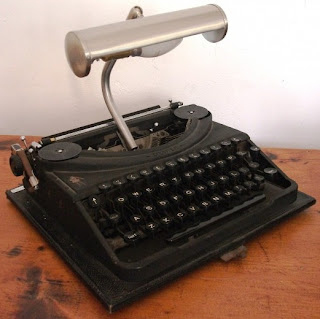 Not satisfied with brutalising beautiful vintage typewriters by removing their keytops, these numbskulls are now trying to appeal to equally shallow minds and modern fashion tastes with this latest obscene design craze. They should be locked up! 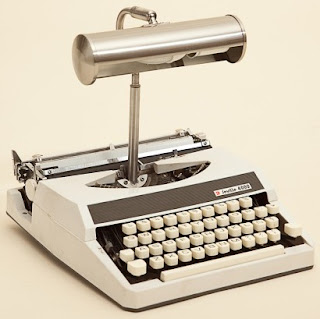 This old Caligraph promotion, however, showed how far the enlightenment of the typewriter age took us from scribbling by candlelight: 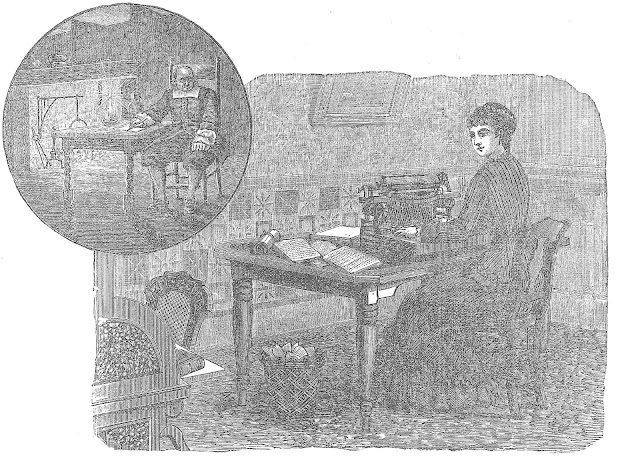 Posted by Robert Messenger at 18:07

Yost sounds like the prfect man to run the Fallow Fields Mfg. Co. If only he was not, so to speak, lying fallow himself.