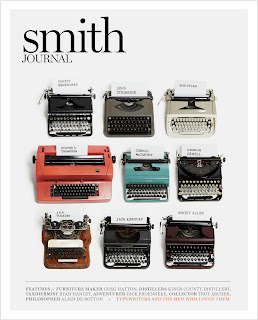 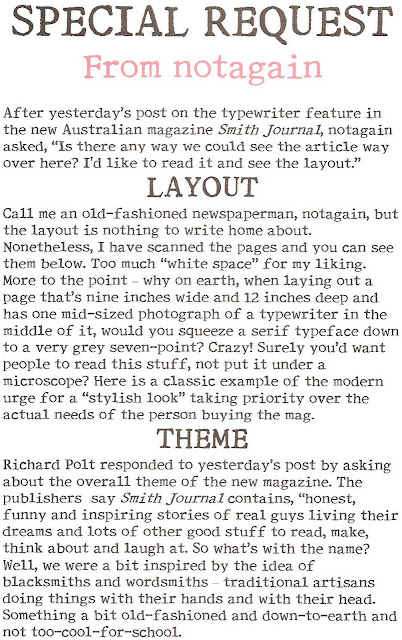 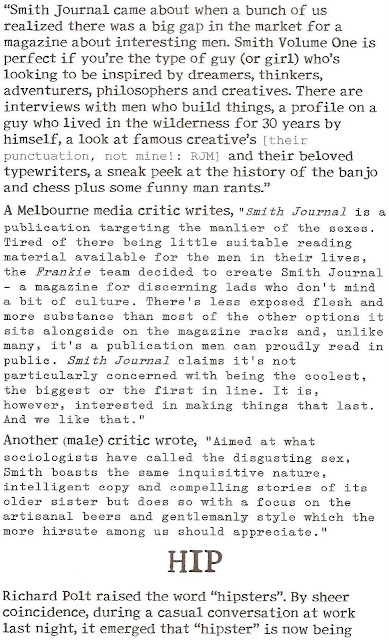 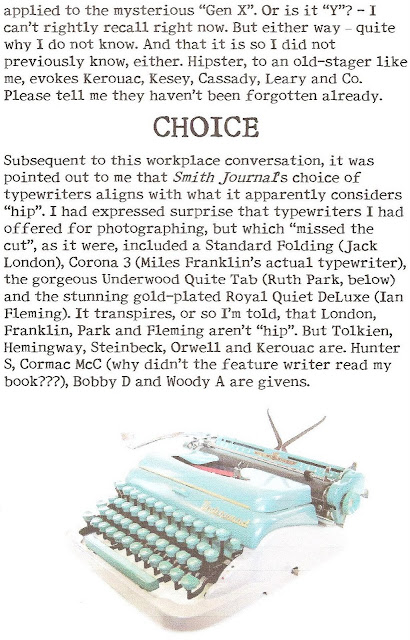 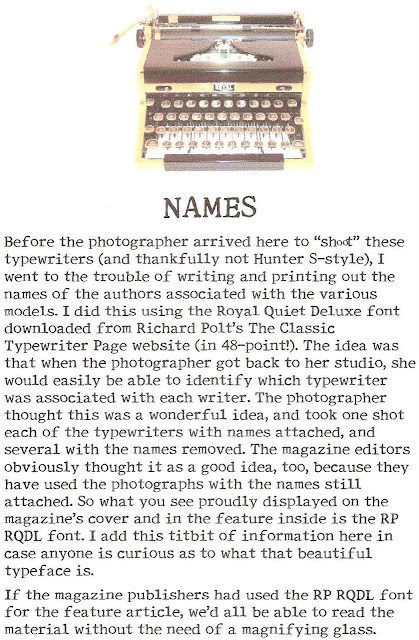 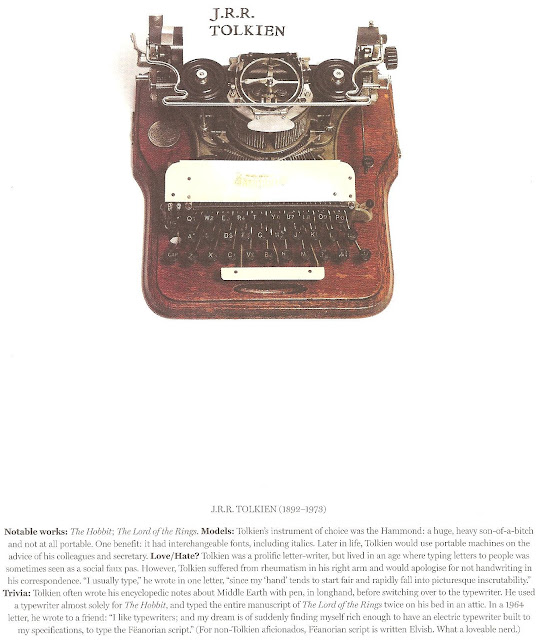 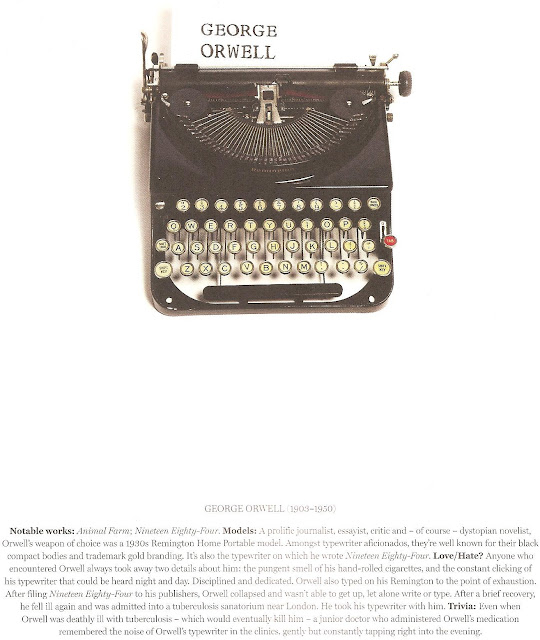 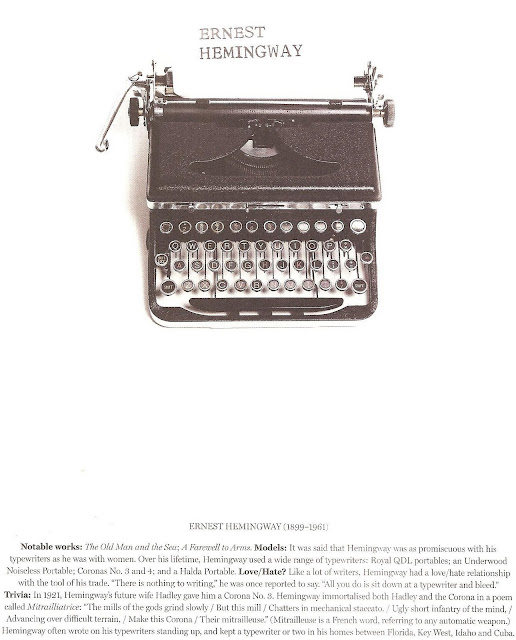 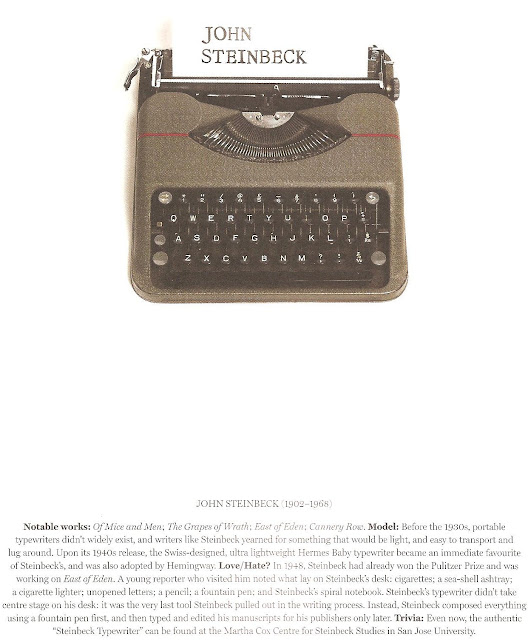 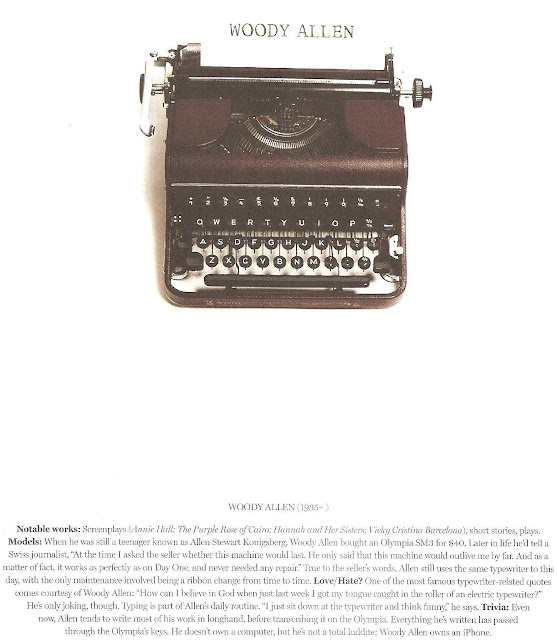 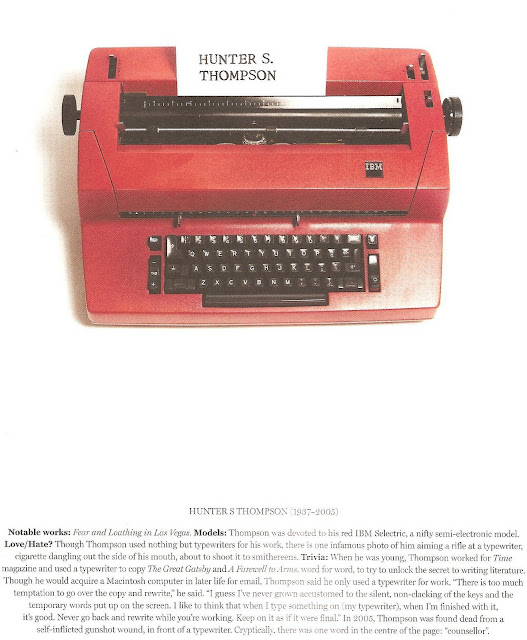 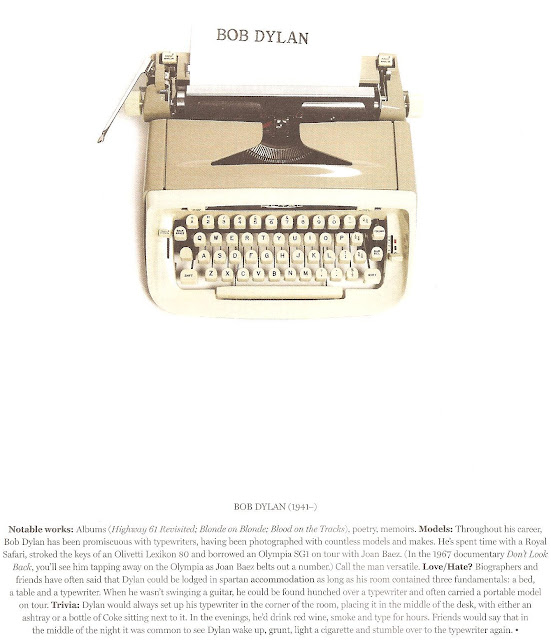 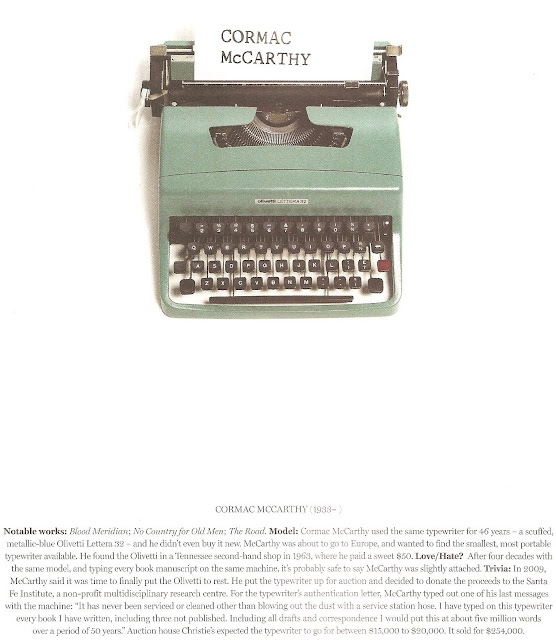 Thanks, Robert! Despite the errors and the ridiculous layout, it's nice to see that typewriters are considered appropriate for a manly men's mag, and there are lots of good anecdotes here, true or false.

I have serious objections to only one thing: the description of the Hammond as "a huge, heavy son-of-a-bitch and not at all portable." C'mon, it's not all that bad. Much more portable than a Selectric!

I do enjoy seeing that QDL font used. The thrift-store machine that provided it is now educating Arizona's youth in Ryan Adney's Phoenix classroom.

Hi Richard. Yes, that description of the Hammond jumped out at me, too. The writer has obviously never seen one in the flesh. They're actually surprisingly light and, off the board, quite small. I didn't read the whole thing closely, but I think there's also a suggestion Hemingway used a Hermes Baby.
Can't beat that QDL font!

Criminy I found a lot of errors in there! Are they hiring a proofreader?
Good to see the publicity but too easy to nitpick what they ended up with. For example I think an artful pile of typewriters would have been an apt representation of Hemingway's messy personal life (and would have set him apart as these things often do).
I thought of the portability question when they told of Dylan taking an SG1 on tour. Same mass as an amplifier, I suppose.
Is the "older sister" something I would recognize or something Australian?

Oh, and thanks very much for going to the trouble of sharing these pages!

The reason, as I said to Richard, that I didn't go through it in great detail is that I grimaced at the reference to the Hammond and the Hemingway Hermes and stopped reading further. Embarrassing! I'd gone to the trouble of giving them a copy of my book, and they just ignored it. Proofreaders, sadly, don't exist any more, not on newspapers and mags, anyway. Re the Dylan SG3, as I pointed out on my Dylan 70th birthday post, he borrowed that in England, he didn't carry it around with him. The "old sister" is Frankie magazine, which is where I was told this feature was going.

I bought the magazine last week based on the cover photo alone and was delighted to see that you'd supplied the typewriters, Robert. I agree that the article has too much white space in it, but I guess they're going for minimalist. As for hipsters, they definitely belong to Gen Y. If I see one more bearded coffee barista wearing suspenders and a paper-boy's cap, I'm gonna pour a boiling hot Espresso down the front of his Op-Shop-purchased shirt.
Back to the Smith Journal, it's only the first issue and, while the content is varied and perhaps slightly bizarre, I still prefer it to all those lad mags on the market.
And don't even get me started on the lack of proof-reading that goes on in the magazine world these days.
Spell Check is for wimps.

Oh, one more thing- Ian Fleming not 'hip'? Are they kidding? Bond would easily read something like Smith Journal, with its articles on classic cars of the Sixties and hand-made axes.