On This Day in Typewriter History (CV)

From Prussia and Ireland,
they travelled to America
to invent typewriters 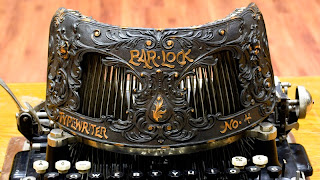 On this day in 1890, the finishing patent which gave Charles Spiro’s masterpiece - the Bar-Lock - its most immediately apparent distinction, its grille, was issued. 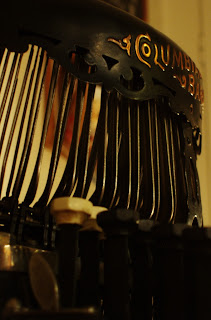 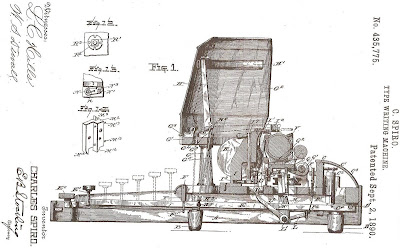 Spiro had applied for the first of four patents relating to the Bar-Lock on April 16, 1887, and his machine was patented in Britain two weeks later. 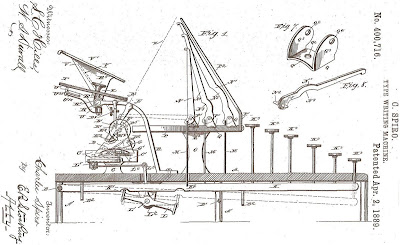 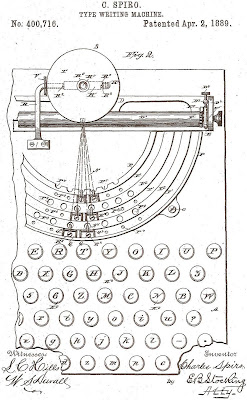 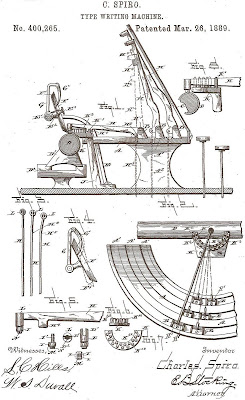 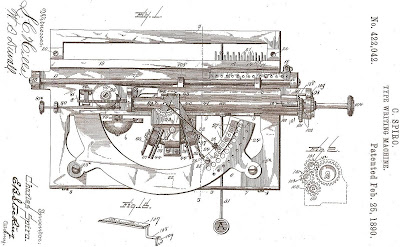 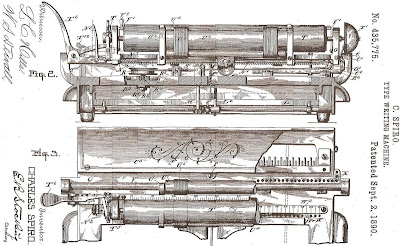 In each successive patent application for the Bar-Lock, Spiro specifically refers to those linked to it and preceding it.
Spiro applied for this last patent on March 8, 1889. It was patented in Britain two weeks later, and in France on April 30, 1889. The application was still pending in his native Germany. 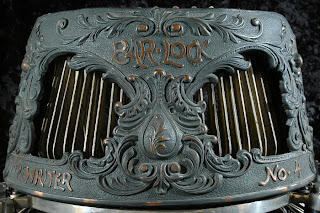 Clearly Spiro’s first priority was alignment and the device which gave this classic typewriter its name: the pins in the horizontal plate between the typebar and the platen. 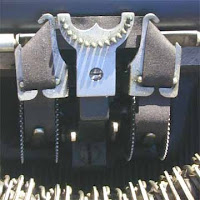 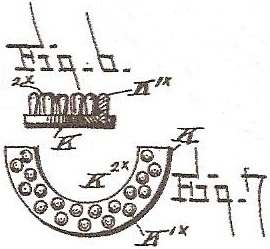 The framework was the last piece of this glorious jigsaw. 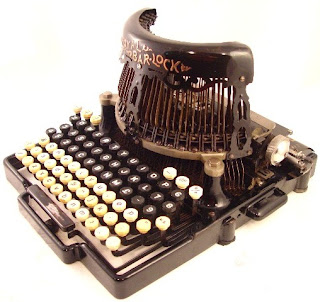 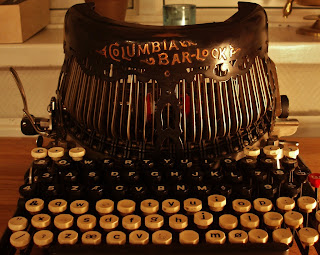 The Bar-Lock obviously went into production while half of the patents were still pending - there is photographic evidence of the No 1 being tested in 1889. 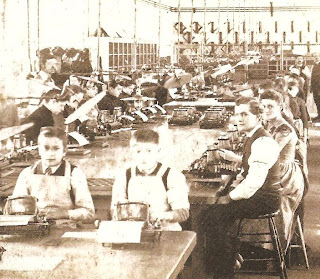 Typewriter historian and avid collector Peter Weil says this was a year "after manufacturing of the #1 was initiated”. The Typewriter Database gives 1887 as the start of production. 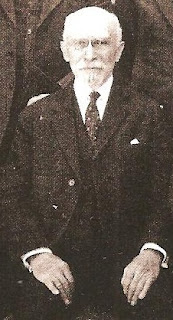 Much has been written about Spiro, and probably the most detailed and accurate accounts of his life and his inventions can be found in the ETCetera editions of June and September 2009 (Nos 86 and 87). Both articles were written by Peter Weil (below), whose research on the subject has been most extensive. Among Peter’s biographical sources was a 1908 Who’s Who in America, as well as a Spiro profile published in The Phonetic Journal in 1892. 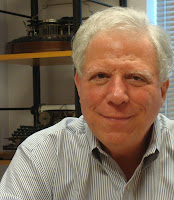 I have taken the liberty of using some of Peter’s images contained in those articles. 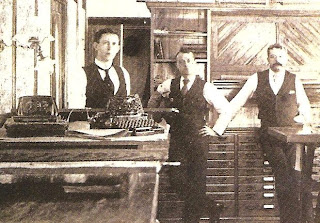 In the June 2007 ETCetera (No 78), Martin Howard introduced an article written by Spiro’s daughter-in-law Bertha S. Spiro in 1940. This article can be seen at http://www.antiquetypewriters.com/collection/downloads/Charles%20Spiro.pdf

It is perhaps based on this 1940 sketch that most of us have over the years come to accept Charles Spiro was born in 1850, and in New York.
Bertha’s story does not actually state Charles was born in the US and, given the year it was written, she was perhaps being diplomatic about where Charles and his parents were born. In fairness, however, aside from the US census entries of 1860 and 1880, Charles’s birthplace was altered to New York.

In fact, he was born in Prussia in 1849, and migrated to the United States with his father, Joseph, and mother, Louisa. As can be seen from this 1860 US census entry (above, the most likely to be accurate), the Spiro household (in the 5th Division of the 17 Ward, New York) also included a Prussian-born servant (Emily Lipman, 21) and a member of Louisa’s family – Pesean Rosenthal, 58; Louisa’s maiden name was Rosenthal. 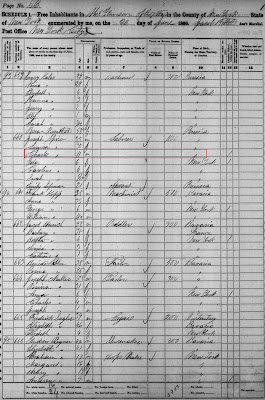 Charles was 11 at the time of the census, and the entry clearly shows he was born in Prussia. Younger siblings were born in New York: Ida (1854), Caroline (1856) and Sarah Spiro (1860).
This would indicate Charles was four- or at best five-years-old when his family migrated to the US.

Caroline, also known as Carrie and Cary, later gave her birthdate as Christmas Day 1858. She married a man called Leopold Eisenstaedt in 1884 and lived to the age of 86. She died in Chicago in 1945, and was probably the last survivor of this listed group.
The 1860 census entry says Joseph and Louisa were both born in Prussia in 1825. Joseph’s occupation is given as a labourer, but in the 1880 census he was listed as a clock maker. 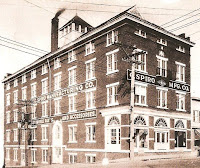 In the 1870 census, Charles, then 21, was listed as a watch maker. The census also lists Ida (sometimes called Ada), Caroline, Hatte (or Henrietta, born 1861), Clara (born 1864) and another son, Emanuel (born 1869). There is no mention of Sarah.
In 1880, Charles, still living with his family into his 30s, was described as a lawyer, and once more his birthplace is given as Germany. Charles’s “ethnicity” was given as “(standardised): American.” Siblings were Ida, Carrie, Henrietta and Clara. Emanuel had presumably passed away. 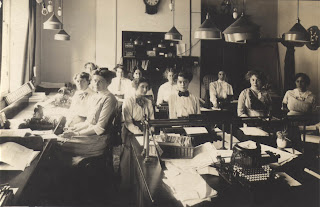 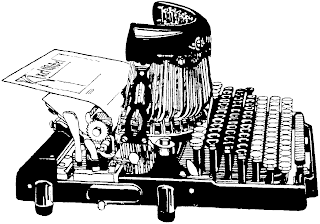 Irish-born Robert John Sheehy, of New York, was issued with a patent on this day in 1884 for what typewriter historian Michael Adler described as “a machine in which a typewheel, controlled by a pin barrel, moved along the paper, which remained stationary”. 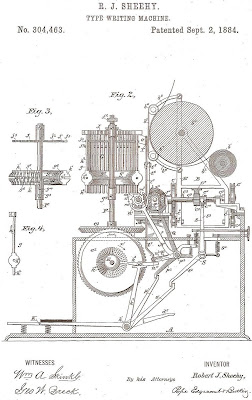 Sheehy himself thought more highly of it. Saying it fell into the category of what was “commonly designated as ‘page-and-line’ type-writers”, he added, “The object of the invention is to provide an instrument which will render its impressions in uniform lines and with the same distinctness, which is not liable to become inoperative through constant use, which does not depend upon the force of the touch given by the operator to effect the impressions, and which presents each character to view as soon as printed”. 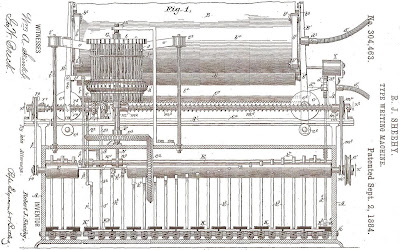 In my post on the IBM Selectric and its golfball (http://oztypewriter.blogspot.com/2011/08/on-this-day-in-typewriter-history_14.html) I mentioned Charles Hire Perry (born Vermont, June 25, 1844), a doctor in Oneida, New York, whose convex single type element design was used almost 70 years later by IBM to come up with its “mushroom printer” in the development of the golfball.
Perry took out a number of typewriter patents, dating from 1887, and some were assigned to Thomas Redfield Proctor (1844-1920, below), a wealthy Utica, New York, banker and businessman who backed Perry’s enterprises. Born in Proctorsville, Vermont, Proctor was one of the New York commissioners for the World's Fair at Paris in 1900.

Here is one of Perry’s typewriter designs, a patent for which was issued to him on this day in 1890. 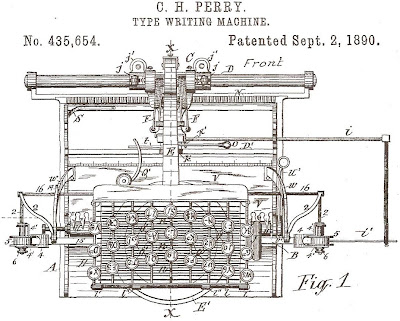 I had no idea Spiro was Prussian, and the Sheehy design is more proof that the Selectric was not radically new in its concepts. Thanks!