Fingerprints Part I: How Typing Leaves an Impression 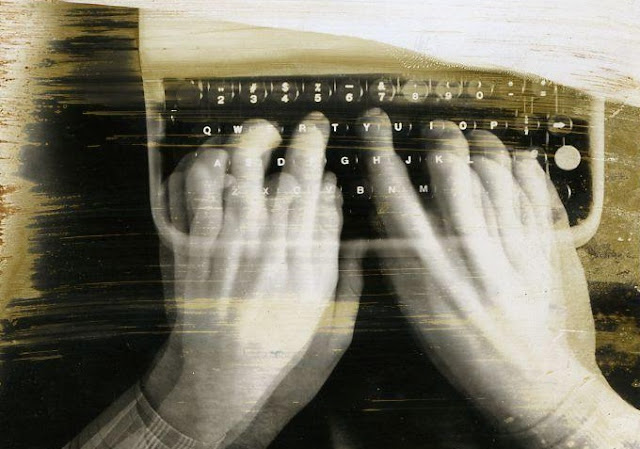 One can only assume that this news story, issued by the Australian Associated Press and widely published throughout the country yesterday, applies as much to typewriter keyboards as it does to computers. Except, of course, it would never be needed on a typewriter, since we don't have the problem of unauthorised users.
Still, it makes one wonder: Do you have an individual style of typing on a typewriter? Are they such things as typewriter keystroke dynamics? What is your behaviour when using a typewriter keyboard?:
"BRISBANE, May 15 - Our typing styles are as individual as our fingerprints, and could be used to identify computer users, says a Queensland researcher.
The Queensland University of Technology's Eesa Al Solami has developed an algorithmic system to analyse typists' keystroke dynamics.
This could allow computers to lock down sensitive information in the case of an unauthorised user. The system is in its early stages and Mr Al Solami doesn't believe it will ever do away with the internet username and password.
"You need a username and password but a username and password cannot protect your computer (once you're logged in), he told AAP.
"My actual approach is to extract the behaviour of users and see if we can distinguish different users during one session."
Mr Al Solami says the system would be valuable to industries that collect large volumes of personal information such as banks and the armed forces, and it could be extended to mobile phones and tablets."
Posted by Robert Messenger at 10:24

People have writing and typing patterns that reflect their attitudes and levels of education. People also all have characteristic bad and good habits.

Author recognition is a slowly developing 'science'. I've personally worked with a group in the past that have used some very basic tools and techniques to identify people who have been using fake profiles on social networking to harass and threaten people.

Typewriter users have other phsical attributes which are identifiable as well. For example: Someone hitting the M key harder than others.

I'm sure we're all familiar with some of the traits that have come from people switching from computer keyboards to typewriters. Even looking at my own writing, and I can see dramatically different personalities.

Thank you Scott, I find your personal observations on this very interesting indeed.

Well, if you'd like to hear about my experiences, I could blog it sometime. There's a tale to be told, for sure.