Johannes Krüger: How His Typewriters Ducked Under the Iron Curtain, to emerge as both Olympias and Optimas 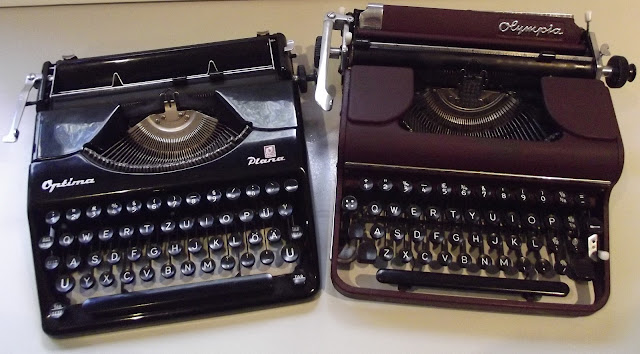 Johannes Krüger was a leading designer and design engineer for Olympia in Erfurt in the years immediately before the outbreak of World War II. He is perhaps best remembered for the sublime, slimline Plana, which he designed from 1937-39. 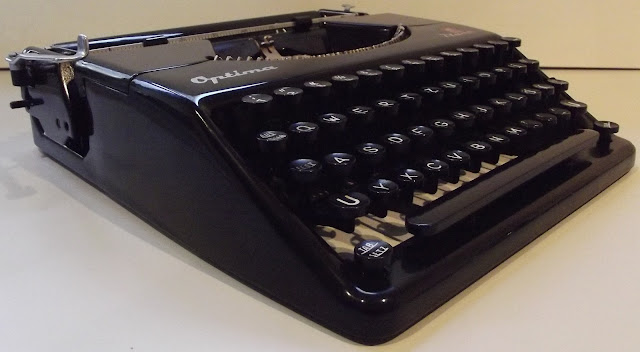 According to the German History Museum, Krüger was also responsible for the 1949 Olympia Elite, a development of Olympia’s first keyboard portables, which emerged in 1931. These included the Elite, the Progress and the Simplex. Whether the museum is suggesting Krüger designed the original machine is uncertain. 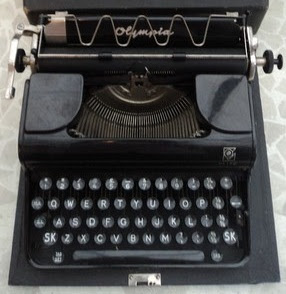 In 1951, when Olympia and Optima went their separate ways, divided by the Iron Curtain and an International Court of Appeal brand name ruling in The Hague, the East German company Optima resurrected the Plana. However, it was Olympia in Wilhelmshaven in West Germany which continued to develop the mid-sized portable, taking the Elite and turning it into the start of the SM series (SM=Schreibmaschine Mittelgroß, or medium-sized typewriter). That Optima subsequently made a significantly different semi-portable Elite suggests some sort of equitable division of design patent rights but not existing model names. 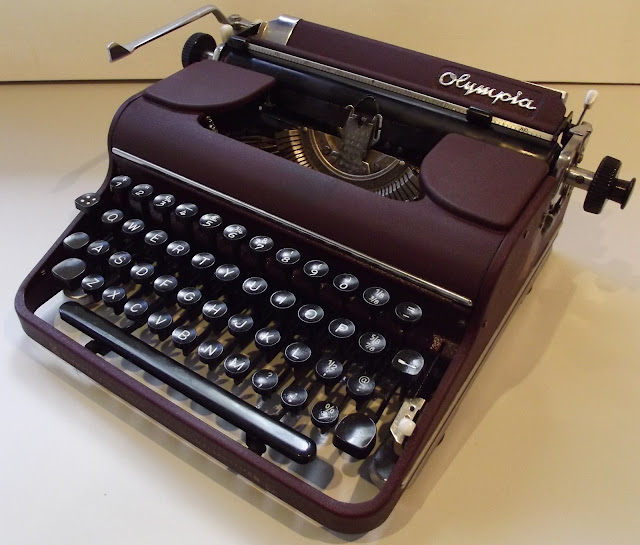 It strikes me that Erfurt was left with the model names, a plant, machinery, dies, tools etc, but found itself thin on the ground for designers. Anton Demmel, for one, had gone west to Wilhelmshaven, and others probably followed. This meant that, at least initially, Optima relied on pre-war designs, while Olympia got on with making typewriters with fresh masks (frames). 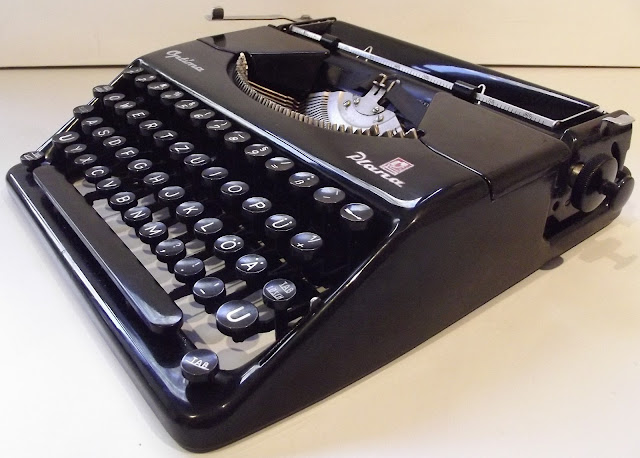 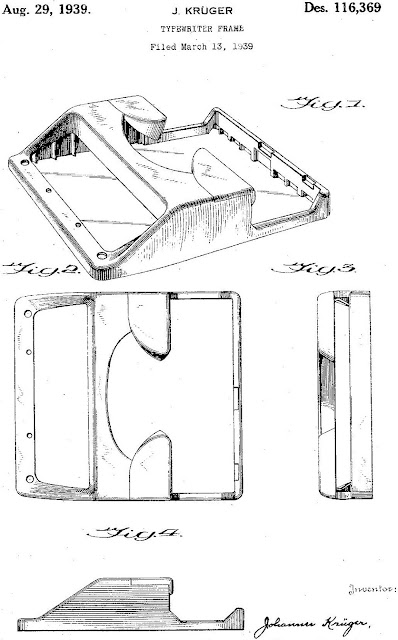 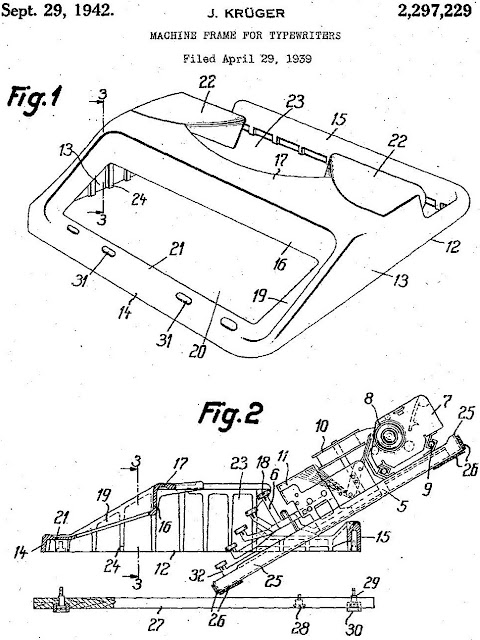 I have no idea what happened to Krüger himself. But his designs lived on, in the factories in both Erfurt and Wilhelmshaven, until at least 1959, when the Plana came to the end of its line in Erfurt and in Wilhelmshaven the designs of  Demmel, Peter Sieber and Arnold Schürer started to overtake the first SM series (1-5?), beginning with the SM7. 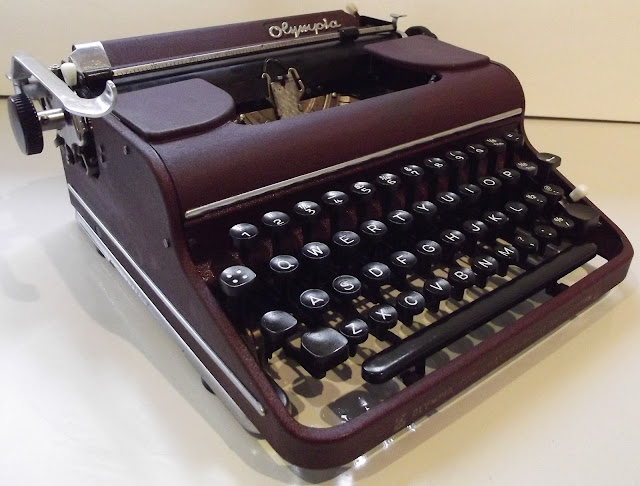 As well, Krüger’s pre-war patents were to influence such designers as Carl W.Sundberg (Remington), Eliot Noyes (IBM) and Giuseppe Beccio (Olivetti), not to mention Demmel himself. 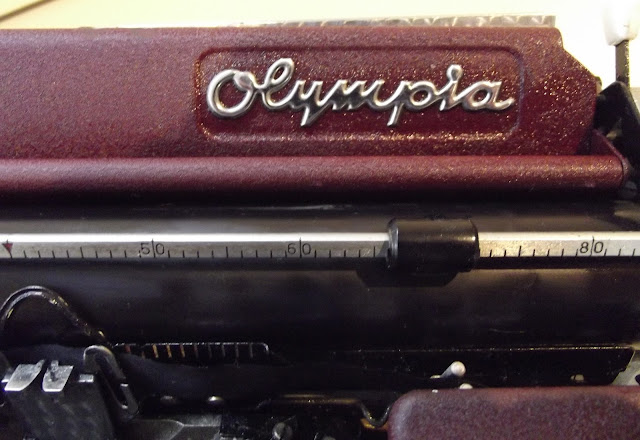 The break between Olympia and Optima was legally sanctioned in 1951, but Erfurt had become part of the Soviet Zone of occupied Germany on July 3, 1945, when American troops left the city. Just before the arrival of the Soviet occupying force, there was an attempt to transfer 1.8 million Reichsmarks, or 35 per cent of the share capital of the Olympia works, to Hamburg. Because of a suspect processing error, this did not materialise. From 1946 the works belonged to the Soviet stock company Staatl Aktiengesellschaft (SAG) and, along with Rheinmetall typewriters, Olympia was incorporated into the Soviet "parent" joint stock company group Totschmasch. The Erfurt operation was then Olympia Büromaschinenwerk Sowjetische AG für Feinwerktechnik Erfurt (office machines per precision engineering plant Soviet Erfurt). After the transfer to public ownership, the operations of Olympia Erfurt and Olympia Hamburg-Wilhelmshaven were judicially reconstituted. As a result of the product name dispute, the Erfurt company was renamed in 1950 as Olympia Büromaschinenwerk Erfurt, in 1951 as Optima Büromaschinenwerk VEB Erfurt, in 1952 as VEB Mechanik Optima Büromaschinenwerk (this was when my Plana was made, as one can see above) and from 1953-69 as VEB Optima Büromaschinenwerk Erfurt I hope all that is as clear as mud!

Interestingly, Demmel had worked alongside Krüger at Erfurt in the late 1930s. Demmel obviously made it into West Germany in the early 1950s, I wonder if Krüger also did? 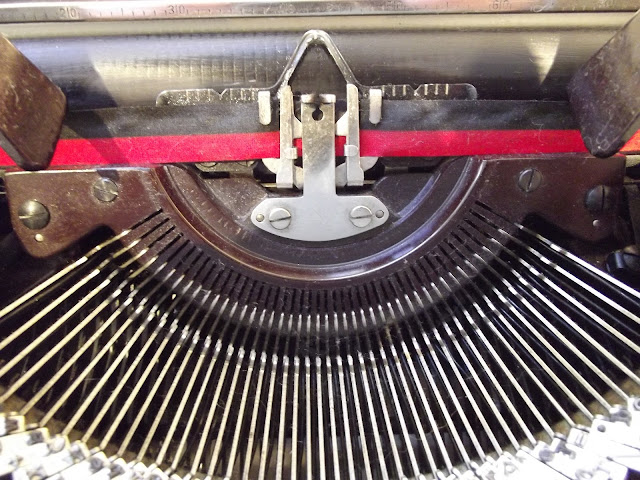 Bakelite segment on the Schmitt Express (see below)
I feel certain that one significant difference between the pre-war Olympia Plana and the post-war Optima Plana was the use of Bakelite. Smaller, lower, more compact portables were the rage in mid- to late-30s Europe. To make them even lighter, Bakelite masks and segments became an experimental option.
I am not sure whether the mask of the original Plana was made of Bakelite, but at least the segment was. 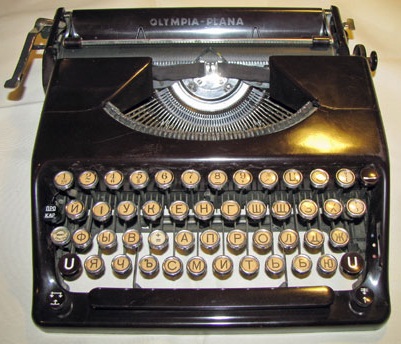 I recall that earlier this year a German eBay seller contacted me about a Cyrillic keyboard Olympia Plana he had for sale. One collector who had it on his watch list pointed out that there was, not unexpectedly (given it was Bakelite), a small crack in the segment. On the Optima Plana I have, the segment is made of metal. I will return to the Bakelite segment shortly.
Let’s first look at the Olympia Plana, which was presented for review in 1939, at the Leipzig Spring Fair.  According to Eberhard Lippmann’s 2008 The History and Development of Optima Erfurt, the Plana was “a sensation in terms of size, weight and mechanism.” 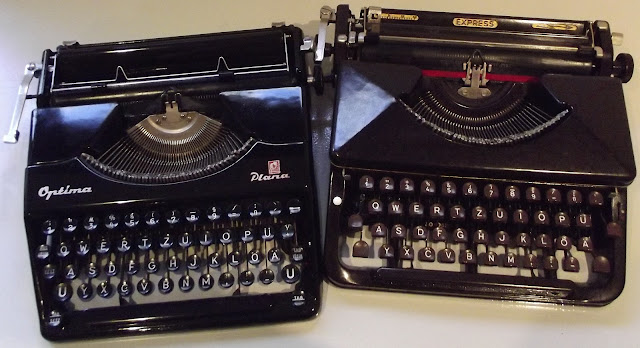 My research into Krüger’s work became quite serendipitous for me, because in looking at his patent for the Bakelite segment I finally discovered the name of the inventor of the Bakelite typewriter, the Schmitt Express. Heinrich Schmitt, of Frankfurt am Main, assigned his designs to Rudolph Wittich of Frankfurt in 1951-52. 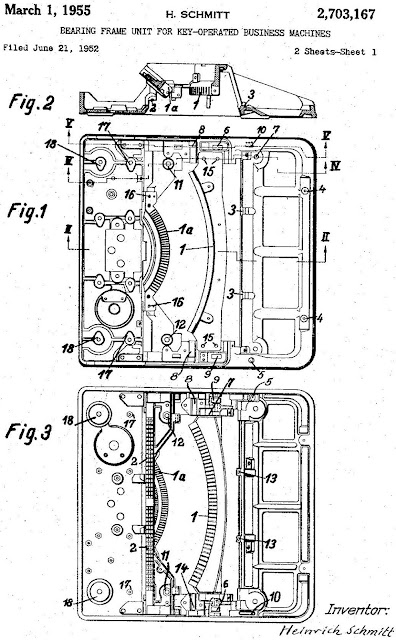 Hitherto, almost nothing was known about the history of the Schmitt Express, even by Uwe Breker (and that’s saying something, as Uwe is a fount of typewriter knowledge). I think it’s fair to say that in the post-Ernst Martin period of 1949 onwards, some German typewriter history is very hard to trace.
Rudolph Wittich inherited the company Wittich Fertigungstechnik GmbH which Franz Wittich had started in Kamnitz, Sudetenland, in 1918. The business relocated to Bavaria and set up shop in Atzmannsricht. At the time of Schmitt’s typewriter design, it had been re-established to manufacture “rubber vehicles” (?) by Rudolf Wittich in Gebenbach. In 1955 Wittich, still based in Frankfurt, himself took over development of the Bakelite typewriter.
I was able to track down Schmitt's Express designs because he had referenced
Krüger’s pre-war Bakelite segment. 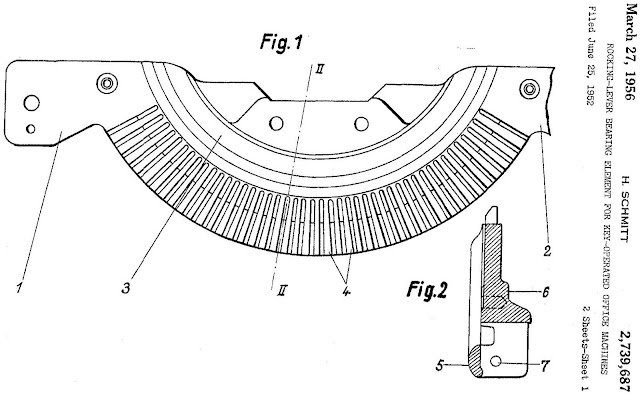 I am indebted to Eberhard Lippmann’s Optima history for the following charts.
OPTIMA-OLYMPIA TYPEWRITER MODELS
1924-1959 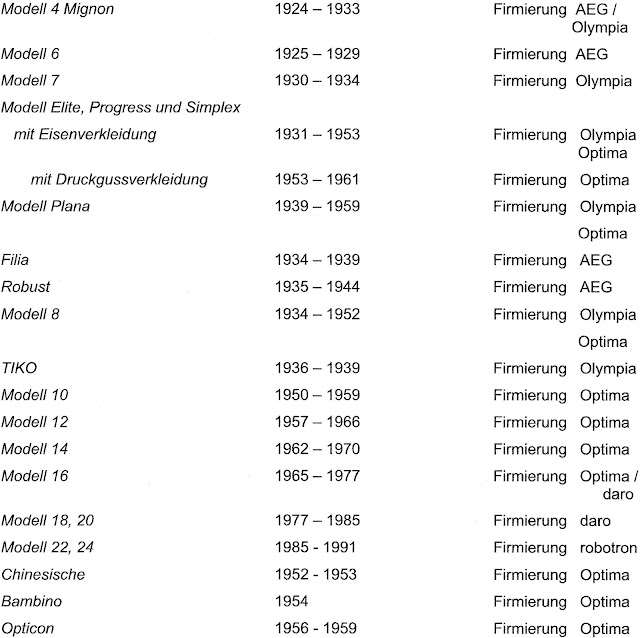 It should be noted that the move to Erfurt from Berlin, where “the physical capacity allowed no more expansion of manufacturing”, coincided from the switch from the AEG Mignon index typewriter to the first of the Olympia keyboard machines. This period from 1924 marks the beginning of Olympia’s keyboard typewriter history.
I have included these lists here because I suspect they may be valuable references for those wanting to know some of the history of the models they own. It should also be noted that “mit Eisenverkleidung” refers to “with iron trim” and “mit Druckgussverkleidung to “with die-cast casing”.  The Bambino (1954) is the Bakelite version of the Frolio 5. The one below sold on Australian eBay a month ago for $200: 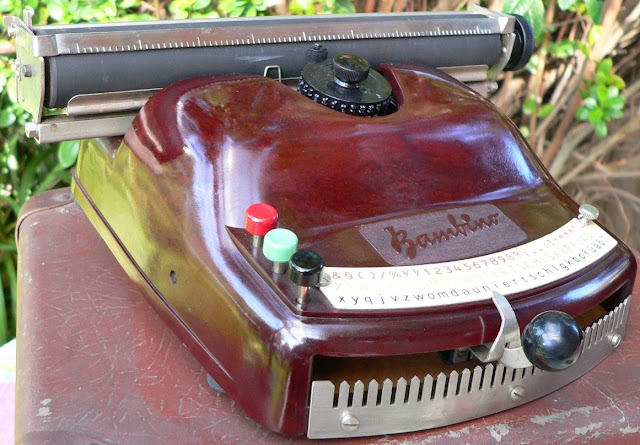 The second list gives a run down of the various company names, leading up to Optima in 2004.

Johannes Krüger assigned his patents for the Plana to Olympia  Büromaschinenwerk  AG, Erfurt, including for the segment and the ultraflat typewriter’s case. 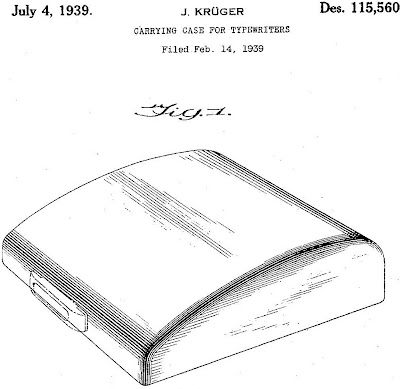 In terms of the Bakelite segment, Krüger had some interesting comments to make about the way segments had been made up to that time: 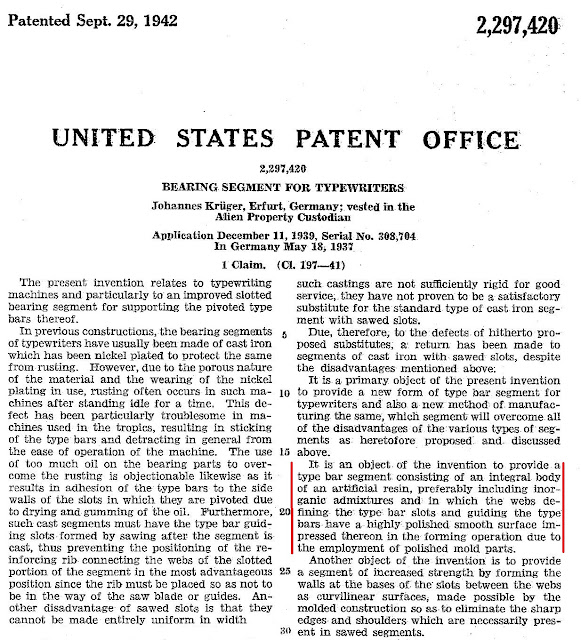 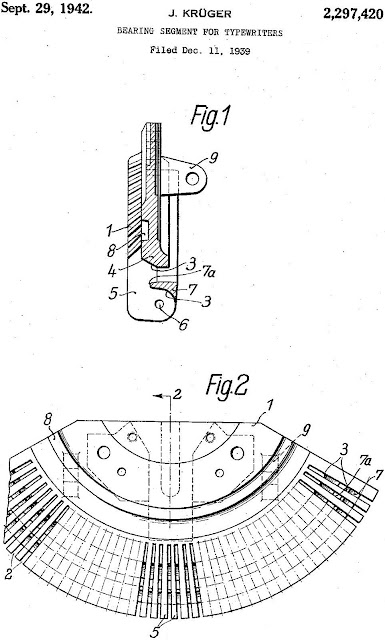 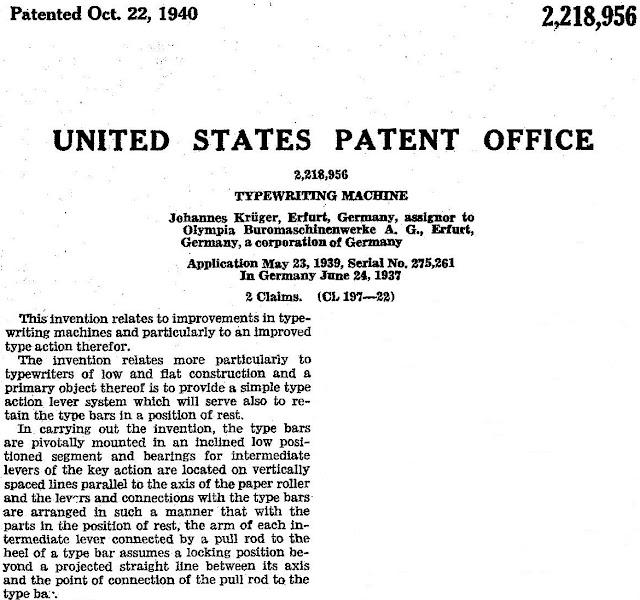 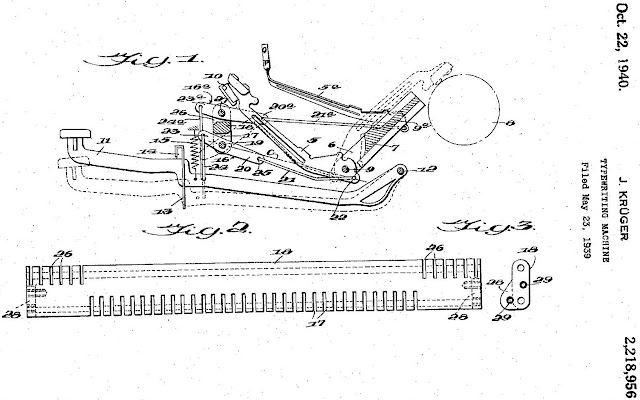 Now there's a coincidence. To the west, I have an Optima in waiting. To the east, an Olympia SM to collect. This is more great background info, thanks Robert.

Great post! Even I, who knew quite a lot about Optima alrady, learnt something new!

What really nice machines! All of this information is overwhelming. I love it! You do a superb job on all your research and posts.

I wonder how the bakelite segment held up and then a bakelite typewriter.

I have a Hungarian pre-war Plana which I won for one euro and which the shipper sent to the US very poorly packed, so that fragile bakelite segment got a crack in it.

In general, bakelite is pretty brittle stuff, not very practical. But for some reason, it looks so much nicer than the later durable and flexible plastics.

Thank you for your post, it was easily in top two most helpful pages I found trying to investigate the year my own second hand Olympia Progress (#609405) was manufactured. I guess it's from somewhere between 1948-50, because in the Typewriter's database list the serials stop in 1948 (#571872-600955)and they say that: "After 1948 Olympia factory becomes East German Optima, see OPTIMA for further serial number data."

In addition there's a significant difference between the serial number of the model "1950 Olympia Erfurt Progress" (#651234, link below). Also it already has the text "Ehrfurt" in it, which mine lacks. Mine has the logo "Olympia" in the middle and the text "Made in Germany" to the left. The typewriter also has finnish letters in it.

I guess there's no clear records of the phase of Erfurt factory when the Soviets took over. I yet wonder if my typewriter was still manufactured under "Staatl. Aktiengesellschaft AWTOWELO, Büromaschinenwerk Olympia Erfurt" or the latter, "Olympia Büromaschinenwerk Erfurt".