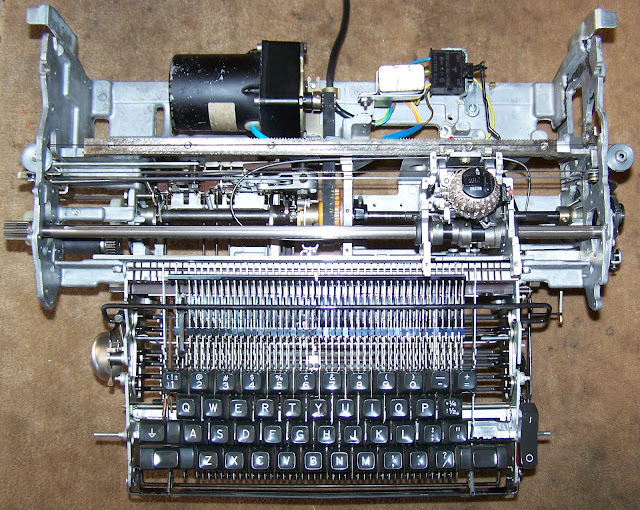 Peter Brill, that genius among electric typewriter technicians who built for me an IBM Selectric III with a Blickensderfer keyboard, has just completed another amazing IBM Selectric project.
Both of Peter's fascinating achievements will go on display during my typewriter exhibition at the Canberra Museum and Gallery from July 14 to September 16.
With this latest one, it is possible for people to watch in slow motion the way in which an IBM Selectric typewriter works. They can press a key and then follow as the various components slowly work through the process of typing. Normally, of course, the Selectric operates so quickly that the press of a key and the imprint from the golfball type element seem to occur almost simultaneously.
Peter has combined a Selectric II (895) with the motor and gearbox from a Nashua 220 photocopier to  make this slow-motion action happen.
"It's working fine," says Peter, who lives in Perth, Western Australia, on the far Indian Ocean side of our vast continent.
"The Nashua motor has all the grunt needed to shift and underscore "_", which has the most amount of resistance to print.
"The cycle/operational shaft now spins at 31 revolutions per minute, which seems just the right speed for the eye and brain to make sense of what is happening."
Meanwhile, Peter has cleaned up the Selectric III with the Blick keyboard and it's ready to be transported to Canberra, all 26kg (57lb) of it. Here is what it looks like now: 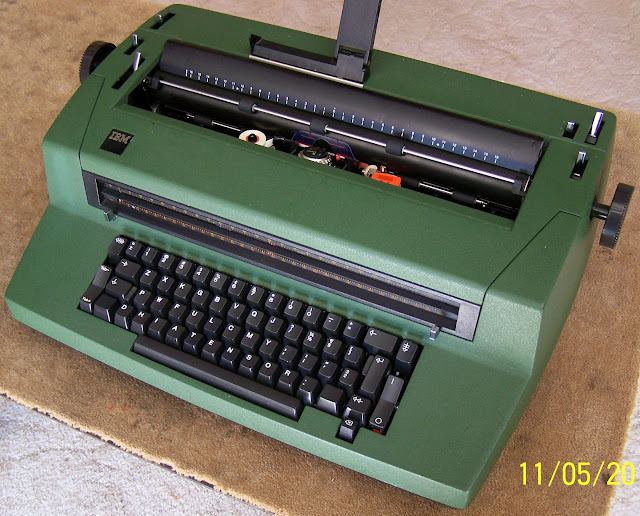 Very interesting! I have another project you could try someday: a "non-electric" Selectric. Just mount it on top of one of those old-fashioned sewing machine cabinets with a pedal and a leather band (perhaps with a reductor pulley to adjust the speed) connected to the main shaft...

I would love to see the slo mo selectric at work. Any plans on a video for those who can't make it to Canberra Museum?

Yes, I really want to see a video too.

Peter, you're a genius, mate!

Thanks you Miguel, typebarhead and Richard. I have arranged with Peter to ship both Selectrics over this week, and when the Character Selection Demonstration Machine arrives, I will make a video of it in action and post it.