Some Handy Hints for Selling Typewriters on eBay

These typewriter listings which appeared on an Australian eBay alert this morning have - since many of them came from new sellers - encouraged me to offer some hints on "How to Sell Typewriters on eBay". Or, perhaps more to the point, "How NOT to Sell Typewriters on eBay".
1. When listing any typewriter, let alone one with a starting price of $150 and a Buy it Now price of $235, it's a good idea to give potential buyers a decent look at the item for sale. A postage stamp-size image of 3.85KB simply doesn't do it:

Yes, folks, that's how it appears in the listing. A magnifying glass, anyone? 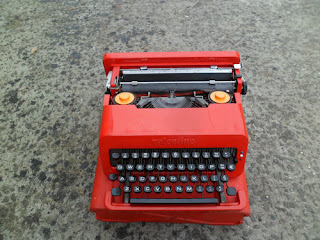 2. Might be prudent to mention one has a Valentine for sale in the listing heading, not just that it's an Olivetti. That way, the bidding might rise above $25. Mind you, going by what Adwoa posted about the Valentine sale in Switzerland, some common sense might be starting to kick in (though I'm not holding my breath about that just yet!).
3. Now, here's a really good idea. Put the typewriter on something straight and solid. Stand in front of it, about three feet away, hold the camera level, in both hands, and take a picture. Easy, right? Especially advisable when asking $100 for a Remington portable. Not a good idea: Standing on your head while taking typewriter photos (A relevant question here: Is it art or do you actually want to sell something?). 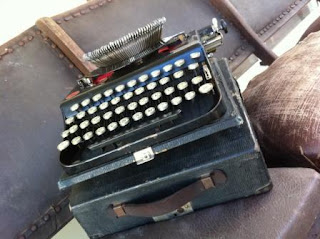 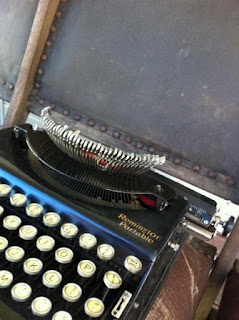 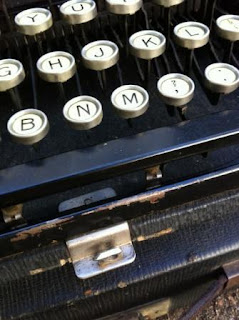 4. While on this subject, it's always a very good idea, when listing a typewriter for sale for $50, to have the typewriter facing you when you take a picture of it. Now, for newbies, let me explain: that's the keyboard to the front (the keyboard is the thing with the keys on it): 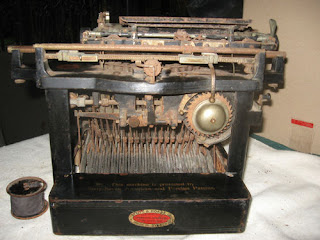 5. I would also probably advise that, should you have 10 typewriters for sale, you list them individually at $4.99 each, rather than as a job lot for $4.99. But anyway, good luck with this Jim! 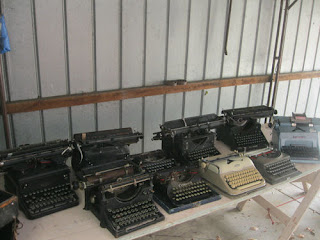 6. Mind you, having said all that, ANYTHING is possible with Australian eBayers. Believe this or believe it not, but three potential buyers put in four bids, and someone actually paid $26.89 for this bit of rubbish: 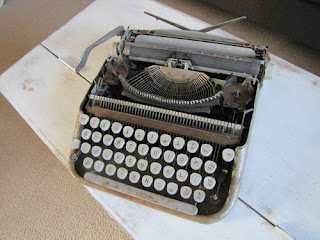 Appropriately, perhaps, it was listed by a seller called "Creative Design". Yeah! And listed as having an "industrial look". Which, I guess, is code for "refuse dump look". Regardless, it's always advisable to mention that the machine has no ribbon spool cover.
7. Now here's a chance for a seller to be positively creative: it's the typewriter with no name! But since it's a Nakajima ALL (what else?), it could be all things to all people. Why not suggest that, for a mere $8, someone buy it and make up a name for it, any name, and stick it on the front: 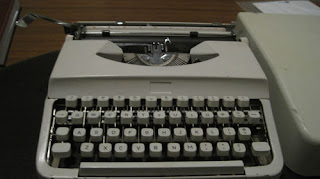 8. One last general rule. Don't treat potential buyers like fools and put in ridiculous postage costs. OK to list a repainted (not mentioned, incidentally) Royal for 99 cents (or Buy it Now at $199), but it's something else to expect anyone to believe it will cost almost $60 to post, even right across the country: 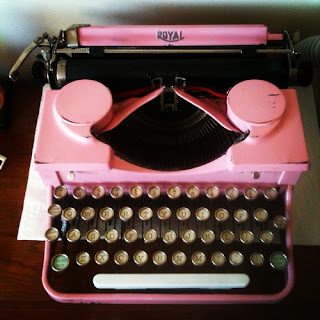 A couple of weeks ago a seller asked about $47 to send a typewriter from Adelaide. When I queried this, he said, "I send express delivery, door-to-door, double boxed". Express: It took EIGHT days to arrive! Double-boxed: Two thin cardboard boxes, one inside the other, with no padding! Please! Spare me the bull****". What this seller really meant to say was that he rips off buyers by doubling the sale price through inflated postage costs. It's all too common these days ...

ha! great advice. funny, too. you cannot fix stupid but i commend you for fighting that windmill.

Thanks Trent. The stupid I can live with, the rip-off merchants I can't. I wish there was some way of banning them all from eBay.

The rip-off artists are a total pain and never seem to get booted off ebay no matter how many negatives they receive.

I enjoyed your examples. I've seen almost every variation on these themes. Every once in awhile, a poorly described or photographed item is actually a gem. As long as it is reasonably cheap, I sometimes take the risk.

This is hilarious, Robert! Thanks for taking the time to write it and liven up a Monday Morning :)

Shame about that job lot - there are a couple of nice portables in there, but no one would want to be saddled with all those standards too.

Thanks Dwyane and Adwoa.
My pleasure Adwoa. This and the post on The Canberra Times story about you are the least I could do in return for the Condor, Rexina and Bar-Lock portable! Would you like me to post the original copy of that article? It would be no bother if you wanted it.
I think I have had some dealings with the seller of the lot of 10 typewriters. He actually emailed me at work, but I didn't see it until I went in there last night and he had gone ahead and listed them on eBay by then. For me, it would mean a 16-hour return trip to pick them up - but for $5, may be worth it.

Great post Robert. I've seen worse than some of your examples. I guess the reason Ebay charges fees on postage now is because of the rip-off sellers who charge tripple of what it costs.

Yeah, there are some real sharks and spivs on eBay. I've been lucky to make a small profit on the machines that I've sold, but I've been careful to list faults (if any) and take nice, big clear photos as well. I friend of mine once said about selling cars; "If it shines, it sells."
And I really, really hate it when the seller doesn't show an example of the font to give an idea of the ribbon's condition. makes me think they've got something to hide. As for "funky, modern, retro", well...let's not even go there.

That really is hilarious, Robert.

One thing I see all the time, that's so easily remedied - this happens most often on shopgoodwill-dot-com: typers with the keys/typebars all jammed together. Really, just take three seconds to untangle them. Drives me nuts. Sort of like talking to somebody with a big glob of mustard on their face. You can't do anything about it, but it drives you batty!

or: "I don't know anything about these; don't know if it works; may need new ribbon; found it in my grandmother's attic, she asked me to sell it; buy it now for $250; local pick-up only"

Thanks Bill, Tino, Duffy Moon and Rino.
Rino, good one - I saw a classic example the other day: "I don't know anything about these, don't know if it works ... see my other typewriters for sale".
They think they can get away with it if the typebar lifts with a key depression; the fact the carriage doesn't move accordingly is invariably overlooked.

I was wondering if you were going to write on the absurdities of what is happening on eBay again. Always enjoyed your assessments.

I thought you may find this ebay advertisement amusing.

Pay close attention to the asking price of the item, then look at the photo closely.

In the immortal words of Mr Kerrigan, "Tell'im he's dreamin".