Doomsday On My Mind 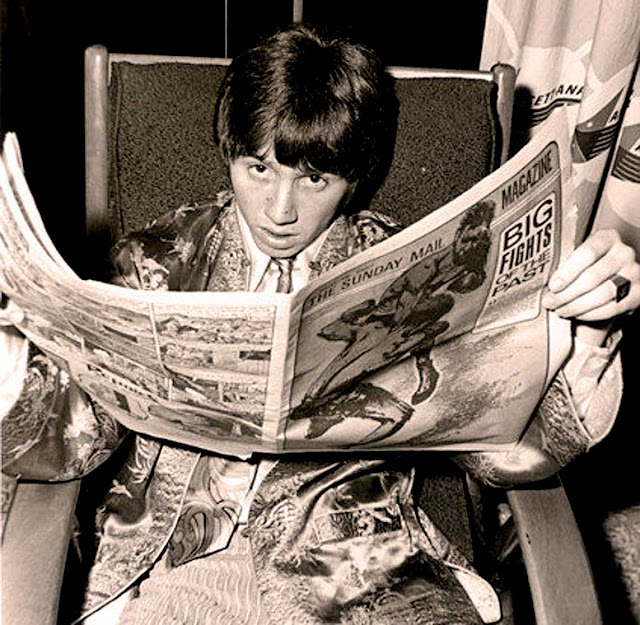 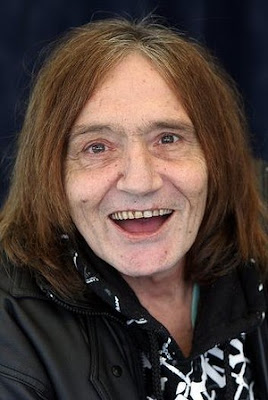 Later
Only two rock stars have ever said to me, "You don't look so effing good yourself." One was on a balmy Sunday night under a big top at Straffan House in County Kildare in the middle of September 1975, the other on a steamy Saturday night in a Long Way to the Top concert arena in Canberra in late August 2002. I guess I asked for it, on each occasion. I had no good reason to refute their rebuff. Eric Clapton and Stevie Wright had no doubt taken some mild offence at my suggestions to the contrary, given they were two of the great survivors in the history of rock 'n' roll music, both once held tightly and longingly in the crippling hug of drug and alcohol addictions which had taken them to the brink of death so many times. I say "were" because one of them has now finally shuffled on this mortal coil.


You can compare this with the Bruce Springsteen
tribute version in Sydney in 2014 here.
Stephen Carlton Wright, aka "Little Stevie" of the Easybeats, described by John Paul Young as the greatest rock frontman in the whole wide world ever, died from complications of pneumonia in Moruya Hospital on the New South Wales South Coast at 6 o'clock on Sunday evening, one week after his 68th birthday. Yes, Moruya, the starting place of my own (in its own way) deadly addiction, for collecting typewriters, the some time home of Red Hot Chili Peppers' bassist Flea, now the death place in the past 15 months of two old friends, Stevie Wright and historian Bill Mandle. For Stevie Wright, the end came almost 39 years to the day after his prolonged dance with Dr Death, fuelled with speed, reached the point of him singing at the elevator doors, thinking them to be stage curtains. To live another 39 years after that took some effort. 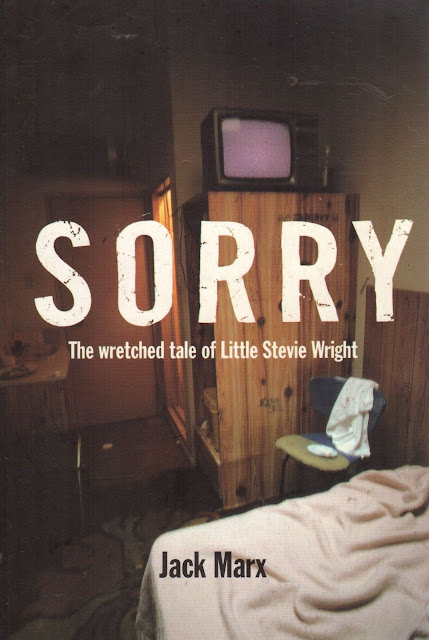 Stevie Wright's comment at the AIS Arena in Canberra in 2002 come back to me yesterday, when one of the glowing tributes paid to him included a clip from the Long Way to the Top national tour. An interviewer had the audacity to ask whether Stevie really did need another drink, to which Stevie more of less snarlingly responded that the journalist could, in the words of Dr Sheldon Lee Cooper PhD ScD, "go and have sexual relations with himself". This was the same time I last saw Stevie, and after the experience of Jack Marx's 1999 biography Sorry: The Wretched Tale of Little Little Stevie Wright, lauded and reviled in equal measure, he was naturally feeling wary of reporters. And I duly wary of him. 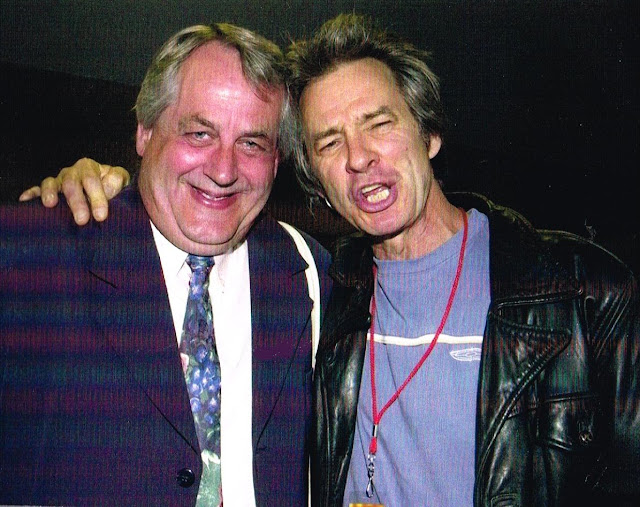 I'd gone backstage to catch up with blues guitarist Kevin Borich, who I'd known for almost 40 years, from his days with the La De Das in New Zealand in the mid-60s. Kevin was lead guitarist when a new, literally Allstars backing group was put together for Stevie by Michael Chugg in 1974. As Kevin and I chatted, I was surprised to spot what looked for all the world to me to be a derro, sitting outside one of the dressing room doors. It was Stevie. The years had been far from kind. He'd been living in relative obscurity in Narooma - relative, that is, to the heady days of the Easybeats, not to mention the Allstars and sundry other quickly aborted comebacks. For 12 years Stevie hadn't been able to stand, on stage or off, without a great deal of pain and some assistance. He'd smashed one ankle twice, each time - perhaps not all that surprisingly - at two in the morning. Once by jumping out a Chelmsford rehab window in February 1976, the other time trying to break into his own apartment in Balmain on the dark and stormy night of February 7, 1990, shimmying up a rusty drain pipe in Cuban heels to his bathroom window two storeys up. The injury led to Golden Staph. But that was possibly the least of it. Now the torture is over. And the tributes flow: "Australia's first international pop star","simply the best rock 'n' roll talent we've produced", "took Australian music to the world", "a pint-sized ball of kinetic energy, a backflipping foot-stomping streak of pure electricity who taught Australian kids what it meant to be a rock ’n’ roll star", "an amazing performer and one of Australia's greatest rock 'n' roll stars, "one of Australia's most beloved rock stars in the 1960s", the last from Billboard itself. None of that was around 13 years ago, when it still seemed a short way to the bottom.
As for Eric Clapton, now 70, there's happily no end in sight. And the memory of our rather differing roles in Circasia still burns brightly. 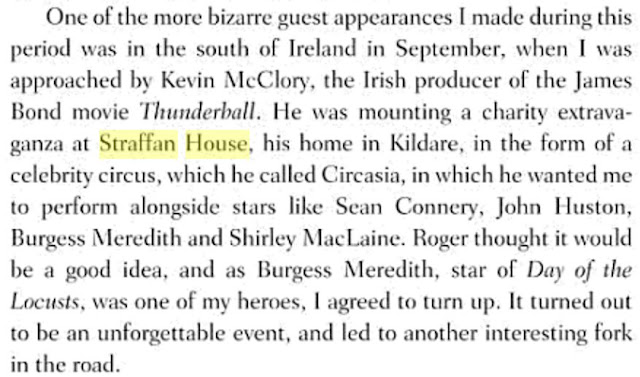 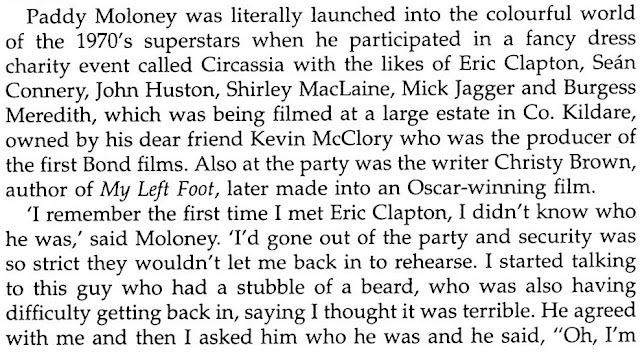 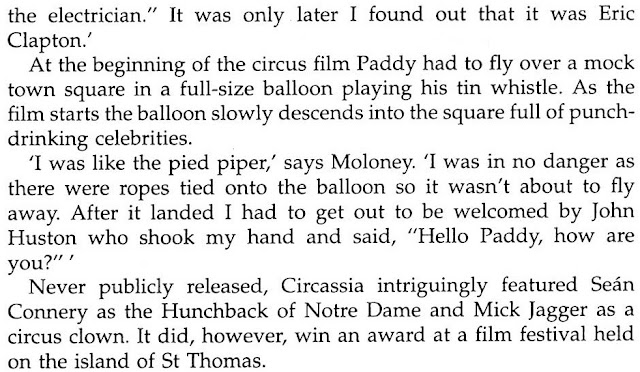 The Chieftains: The Authorised Biography, by John Glatt
Pádraig Ó Maoldomhnaigh, founder, leader and uilleann pipes and bodhrán player with the Chieftains, and author Glatt have got a little confused here. It was me who hadn't initially recognised Slowhand out of costume when we went outside Straffan House to listen to the whole of the Chieftains playing beside a brazier, and to smoke something I don't tell the kiddies about. And couldn't get back in. It was while standing around that I remarked on what I had perceived as Eric's purple pallor. And was told I didn't look too effing good, myself. In my case, at least, with very sound cause.
Posted by Robert Messenger at 15:29

When I hear of these fellows dying or find out their age (they are old!) I realize d*** I'm old too! Sad how so many musicians and other artists and performers got caught in the drugs and self-destructive life style.