George Bernard Shaw's Prossie: What a Blick Typewriter Brings to a Play 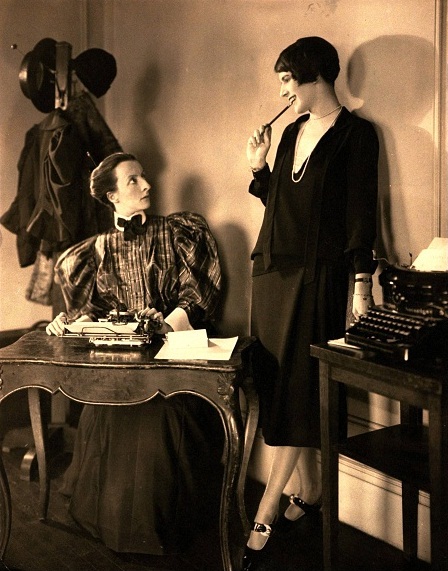 This image, shot in 1925 by the famed Luxembourgish American photographer Edward Jean Steichen for Vogue magazine, shows actress Clare Eames, dressed for her part in a 1924-25 Actor's Theatre production of George Bernard Shaw's Candida, beside a model in more contemporary secretarial dress. Eames is using a Blickensderfer typewriter while the model has a large Noiseless standard machine. The photograph reflects changes in fashion in the 30 years between 1895, when Shaw's play was first staged, and 1925. Eames is in taffeta, leg-of-mutton-sleeve blouse with a high collar and bow tie, and a street-length skirt. 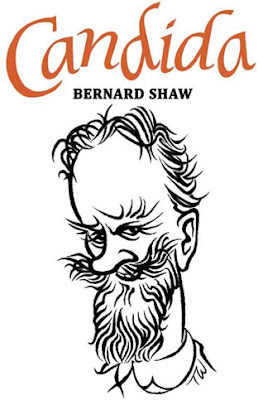 In Candida, Eames played the part of Miss Proserpine Garnett ("Prossie"), a role characterised by Shaw as portraying a "brisk little woman of the lower middle-class, neatly but cheaply dressed in black, notably pert and quick of speech. Not very civil in her manner. She is a typist." She is in love with her employer, Christian Socialist the Reverend James Morel. Eames brought an extra dimension to the role, however, making Prossie a more interesting and influential character. This too is reflected in Steichen's image, for while the modern woman is clearly no more than an office secretary-typist, bound down by the size and weight of her typewriter, Eames' Prossie is more mobile and has a wider-ranging role within the Morel household, becoming a more captivating figure in the story. Her tiny, portable Blickensderfer (plus her disapproving look) speaks of this. 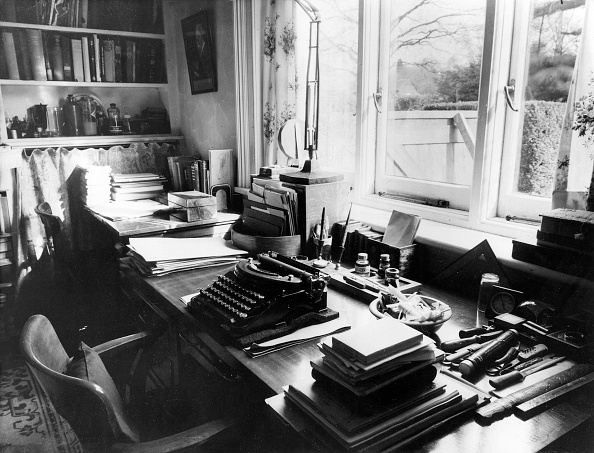 A portable sort of man: George Bernard Shaw's writing shed in Ireland in 1950. Below, Shaw with a Remington Model 1 portable in 1929: 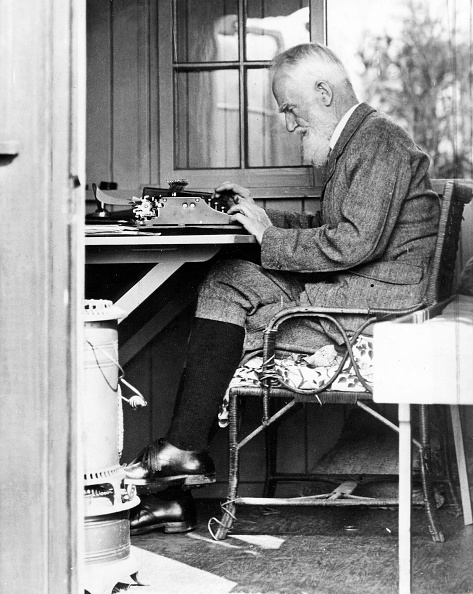 Through Eames' interpretation, Shaw's play becomes not so much a love triangle between clergyman James Morel, his wife Candida and the young lovestruck poet, Eugene Marchbanks, but a love rectangle also involving Prossie. Written in 1894, Candida set out to question Victorian notions of love and marriage, asking what a woman really desires from her husband. It was not until 1904 that Shaw would write about New York having "an outbreak of Candidamania". The New York Sun wrote, "A new complaint has become widespread. It may be described as 'Candidamania'. It is a contagious disease, frequently caught in street cars, elevated trains, department stores, restaurants, and other places where people talk about what they did the night before. 'Have you seen Candida?' is the question of the hour. Thousands are dragging their friends to see Mr Shaw's play." Twenty years later, Eames regenerated this interest:

The review of a 1997 Yale production shows that at least one later actress, Blair Sams, got the Prossie role right, despite the best efforts, apparently, of her director: "'Subtleties Lost In Candida': In Sams' hands, Prossie becomes a far more interesting figure that Candy, as old Burgess calls his daughter [Candida]. Only this working-class woman presents us with an inner life and makes us wonder about her future. Had [the director] developed this approach, he might have given us a Candida with something on its mind. As it is, this production marches along as second-rate museum theatre, plodding forward on a handsome but obvious setting ..."

MORE THAN A MERE PROP 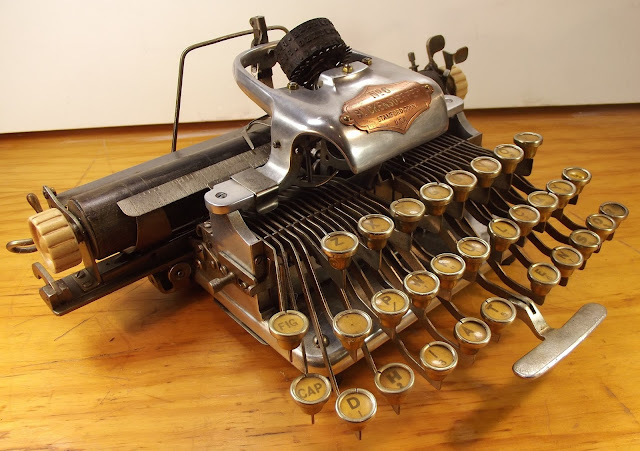 Now, does that not say something about the use of an appropriate typewriter? An eye-catching Blickensderfer? And what that choice of typewriter can bring to the actress's performance and to the production overall?
An early Berlin production shows Prossie using an office typewriter, and more modern American, English and Canadian productions also indicate that Eames' [and Sams'] point about Prossie's role has been entirely missed. Shaw himself felt the play had been misinterpreted. It strikes me that most productions have played down Prossie's significance to the plot. No wonder, with typewriters like these: 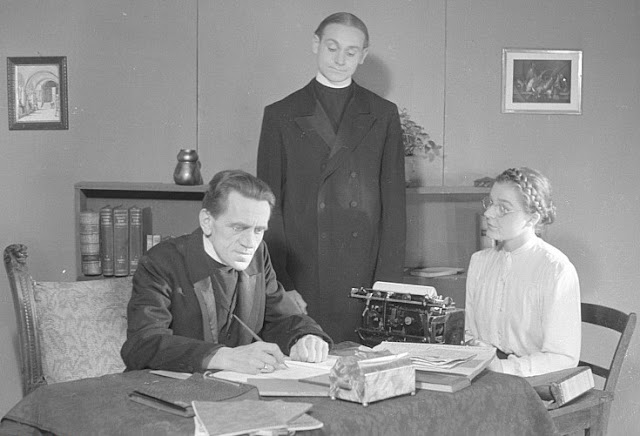 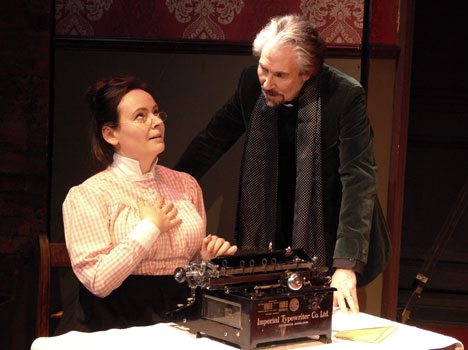 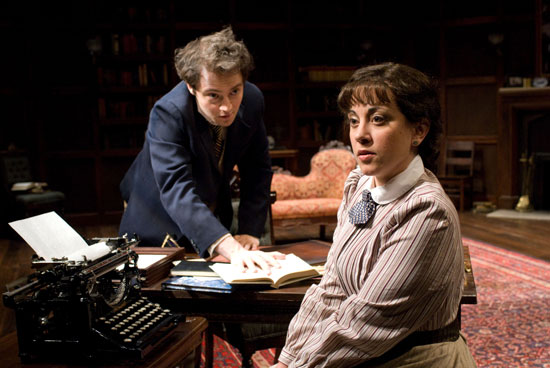 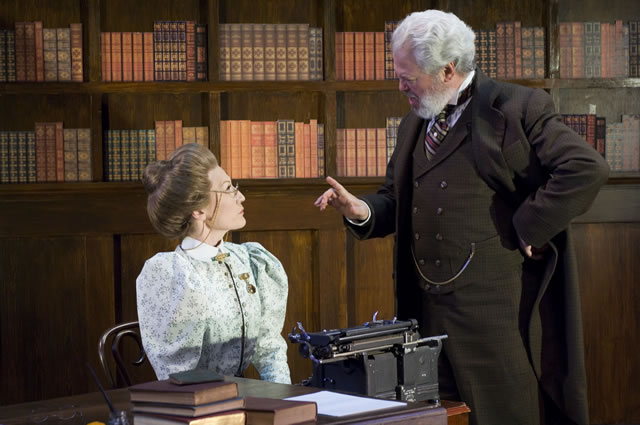 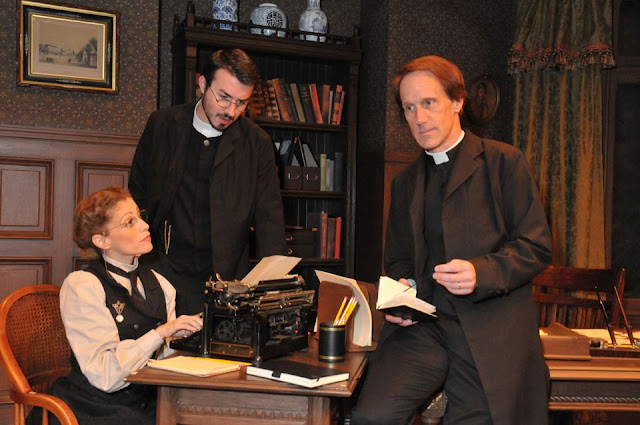 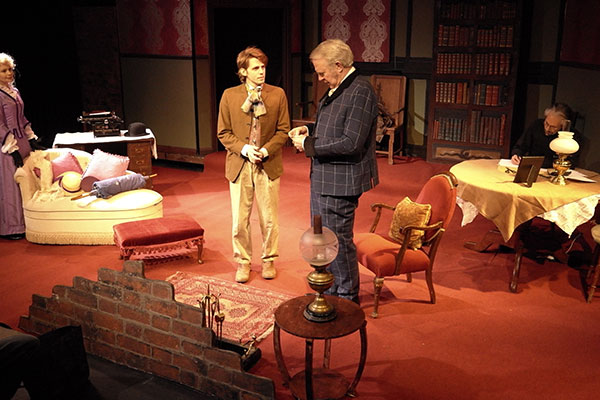 Size and appearance matter when it comes to using typewriters in movies and stage productions. Using a Blickensderfer says far more about a character than a Noiseless ever could. As fine a typewriter as a Noiseless is, when it boils down to it, it's just a big, clunking machine. A Blickensderfer brings so much more character, in itself and to its user, that any standard size machine, and that's exactly what Eames added to her role as Prossie. As Shaw wrote the play, Marchbanks wants to rescue Candida from what he presumes to be her dull family life, believing she is treated with complacency by her husband and that it is improper and humiliating for Candida to have to attend to petty household chores. On the other hand, Prossie, with her portable, should be seen to be far more than a mere secretary-typist, lower middle-class yet with a certain style. 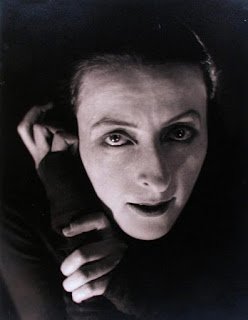 A Steichen image of Eames as Lady Macbeth (1933)
Clare Eames (born in the typewriter town of Hartford, Connecticut, on August 5, 1894; died in London, November 8, 1930) was an influential Broadway actress, stage director and the wife of playwright Sidney Howard. After World War I she was, along with Jeanne Eagels, considered one of the leading new female lights of the Broadway stage, performing in many classic roles, including Shakespeare, Henrik Ibsen and Shaw. She made a handful of silent pictures, but died before given the opportunity to appear in sound movies. She was only 36, and left behind a small daughter Clare, later known as actress Jennifer Howard. 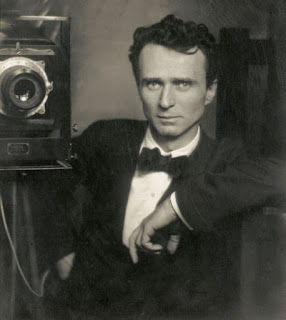 The young Steichen
Edward Jean Steichen (March 27, 1879-March 25, 1973) worked from 1923 to 1938 for the Condé Nast magazines Vogue and Vanity Fair. During these years, he was regarded as the best known and highest paid photographer in the world. In 1944, he directed the war documentary The Fighting Lady, which won the 1945 Academy Award for Best Documentary. After World War II, Steichen was director of the Department of Photography at New York's Museum of Modern Art until 1962. While at MoMA, he curated and assembled the exhibit The Family of Man, which was seen by nine million people.
Posted by Robert Messenger at 11:18

Excellent writeup. Thanks for the information on Clare Eames, whom I am embarrassed to admit I'd never heard of, even though she's a Hartford native. The only time I saw Candida was probably 40 years ago at Hartford Stage, with a young Tom Hulce (pre-Amadeus) in the role of Marchbanks. Can't recall who played Prossie.

Fascinating stuff. A Blick for the movies and a Noiseless for the stage would make sense.

Nick, perhaps Prossie's lack of a Blick on the Hartford stage made her less memorable.