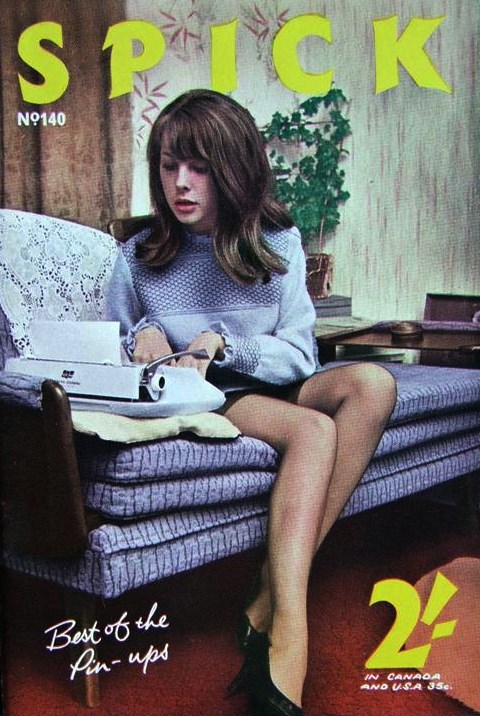 Around the time Tim Berners-Lee was born, in 1955, young boys got their sex education from their almost equally uninformed schoolmates and, if their older brothers conveniently left them hidden under the mattress, girlie magazines. These teachings were, obviously, far from comprehensive, and usually only succeeded in considerably heightening curiosity. Then TimBL grew up and invented the World Wide Web, and wonderment turned into a weird world of false expectations. 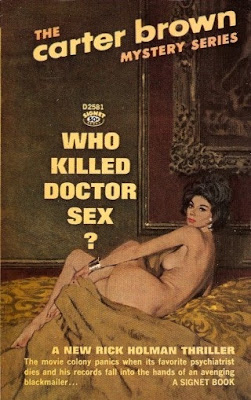 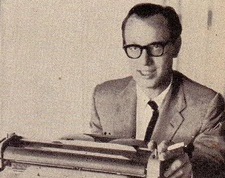 Dealing with sexual puzzlement and frustration was once a critical part of the process of growing up. This wasn't in any way constructively helped by going to James Bond movies or reading Carter Brown pulp fiction (frankly I couldn't get enough of the Qantas PR man, though my family thought he was bad for me). The temporary solution, at least for me, was to pour out the testosterone on the rugby pitch then go home and pump out my own secret agent slush fiction on an Underwood Universal portable typewriter. My classmates thought this stuff wasn't half bad and sometimes I wish I hadn't pulped it before it fell into the wrong hands. I guess if it had fallen thusly, it would have been pulped pretty promptly anyway. 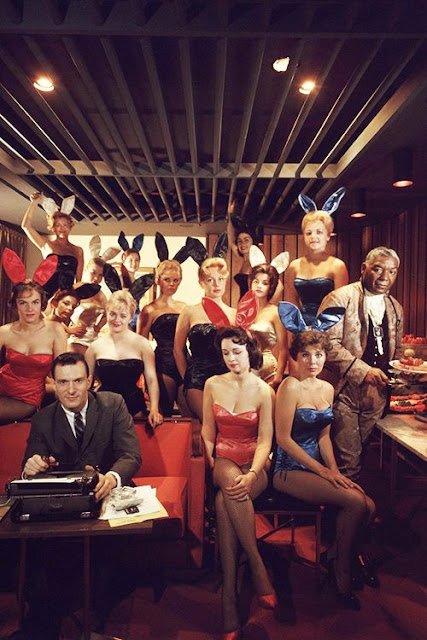 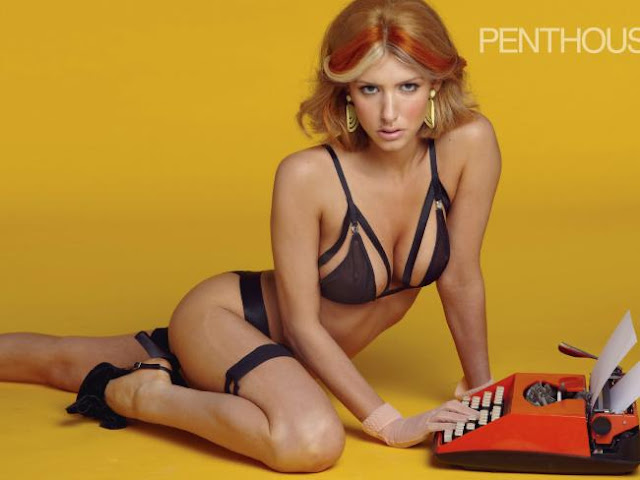 Gabi Grecko
James Bond and Carter Brown notwithstanding, I naturally needed to rely entirely on my hugely fertile imagination to write the many lurid sex scenes (I was, after all, just 14 at the time; admittedly the www has made me no more equipped to write them now). My inspiration in 1962 was, I readily admit, fuelled by such alluring magazines as Man. The far more explicit (if airbrushed) Playboy, Oui, Penthouse and Mayfair had not yet reached our shores. 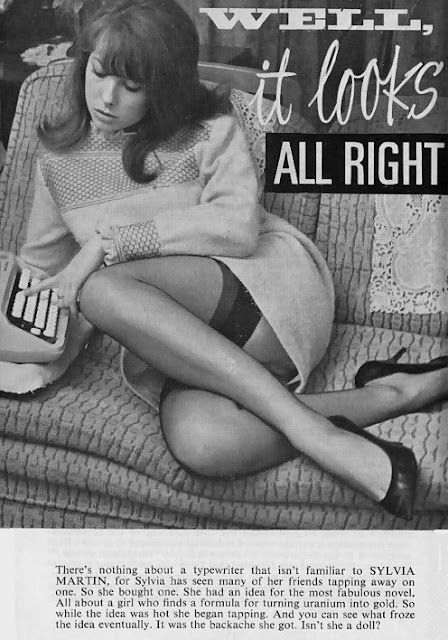 Looking sexy while typing with a Smith-Corona Corsair - surely that's an oxymoron?
In Britain, it seems, that yawning gap in the sexual enlightenment of young men was in large part filled by such pinup magazines as Spick, Span and Beautiful Britons (what a sexy masthead!) - though one can only imagine they merely hastened a loss of innocence along with the advance of failing eyesight! These classics of cheesecake ran for 23 years from 1953 and are reputed to have published pictures of more than 4200 different mostly British women (plus a couple of Aussies wishing to show off their ample wares). 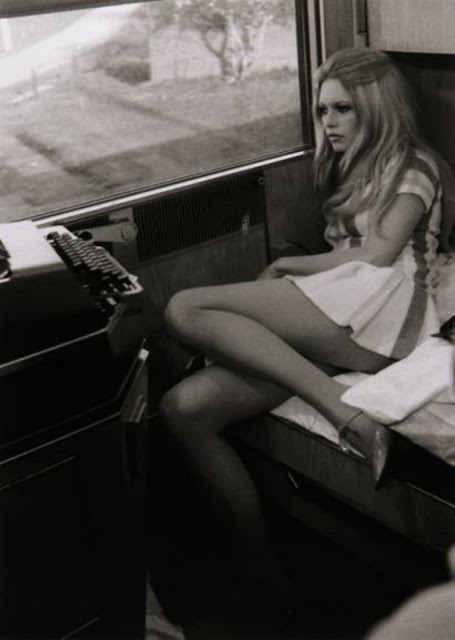 The early editions featured movie stars such as Brigid Bardot (above), Diana Dors, Sabrina, Joan Collins and Anita Ekberg, but Town and Country Publications soon found a far cheaper way of titillating  its readers - by asking them to send in semi-nude photos of their own wives and girlfriends (and in at least a couple of cases, a sister and two daughters). The demand had become one for legally obtained glimpses of the undressed “girl next door”. A female reader wrote in 1958, "Don’t you think Spick and Span would be even more popular if you increased your features on the pretty girls who work in factories and offices and concentrated less on showgirls? As a housewife and mother of two attractive daughters … I’m sure the ordinary working girls retain their charm while showgirls lose a lot of theirs.” 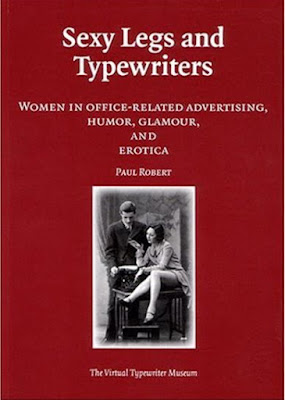 In the introduction to his 2003 book Sexy Legs: Women in Office-Related Advertising, Humor, Glamour and Erotica, Dutch typewriter collector and historian Paul Robert concludes, "typewriter collectors ... tend to regard the typewriter as the single most beautiful and sensuous machine in history, coming second only to the girl touching it".  This does not fully explain, however, why among the 4200 ToCo images, photos of half-naked young women at typewriters pop up so frequently. 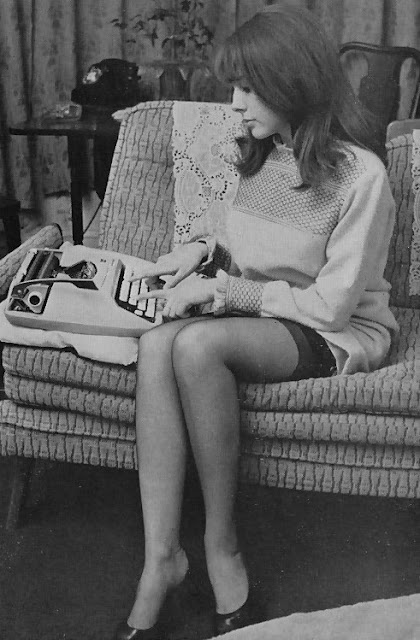 The typewriter, admittedly, is just one of a widely diverse and often bizarre range of props for these pinup pics. Others go from real horses to rocking horses and trikes (uncomfortable, I would have thought, in just a pair of panties), vacuum cleaners, a rifle, pruning shears, teddy bears, umbrellas, a scooter and fancy (and not so fancy) cars, record players and cocktail cabinets, ladders (pretty obvious for the upskirt shots), guitars, tennis rackets and paint brushes (!), pots and pans and clothes baskets, trunks and, most oddly, baths, some empty and some half full of presumably freezing cold water. 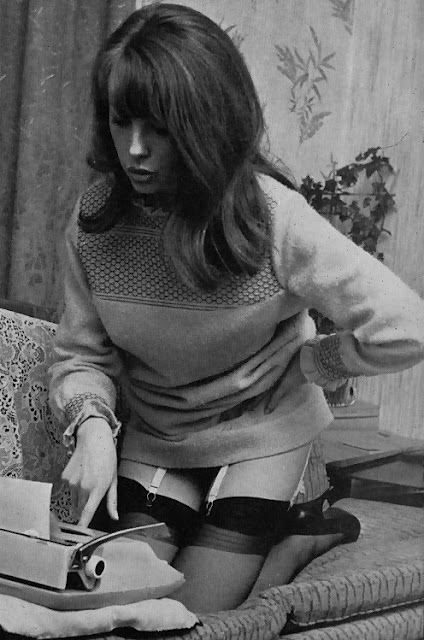 Generally, the photographer's instruction has not been so much "Say cheese!" as "Stick out a brave chin and a fulsome bust." Otherwise bored housewives have been told to "hoik up ya skirts, show ya knickers and smile." Often the subjects were asked to drag out of mothballs an old school uniform, or, worse still, skip in high heels. Many appear demure, most quite brazen. There is too much makeup and insufficient modesty, and the photos are not so much genuinely sexy as gratuitously suggestive. Without that, I guess, they'd be pretty much just lingerie ads - all panties and bras, stockings and suspender belts. I was interested to note that so many of them came from Ayrshire in Scotland, where, I'm happy to vouch, the lassies can be most forthcoming with their favours. 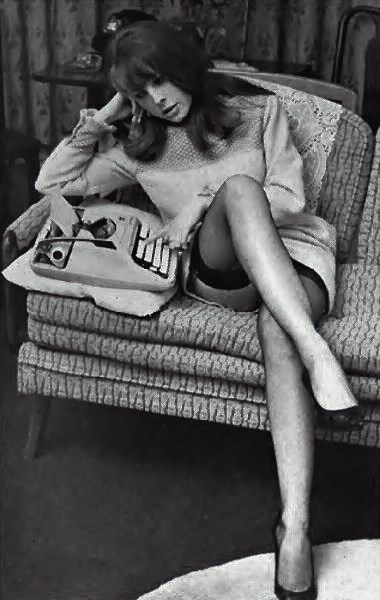 Sylvia Martin, who I've featured heavily in this post so far, and who featured, aged 20, in Spick in July 1965, was not one of them. She came from London and was a professional dancer with a modern jazz troupe who loved show jumping. 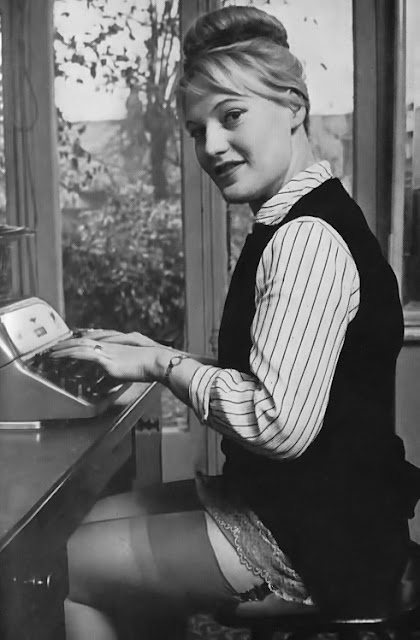 Jackie Murray (aka Helena Borland and Jackie Summers) did come from Ayrshire and was also said to be a journalist and a short story writer. Now, if you can take your eyes off her knickers for a second, can you tell me what typewriter Jackie/Helena is using? It's the same typewriter which appears in many ToCo images (for example, the two below). Clue: Richard Polt featured one on his Writing Ball blog (as it was then) on October 9, 2011. You can cheat by going there, or by going to the end of this post. 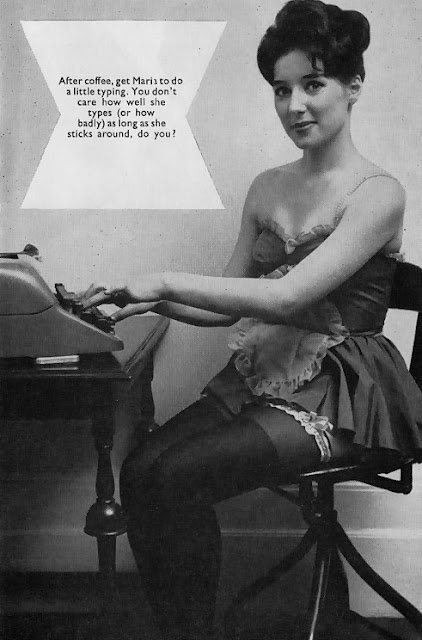 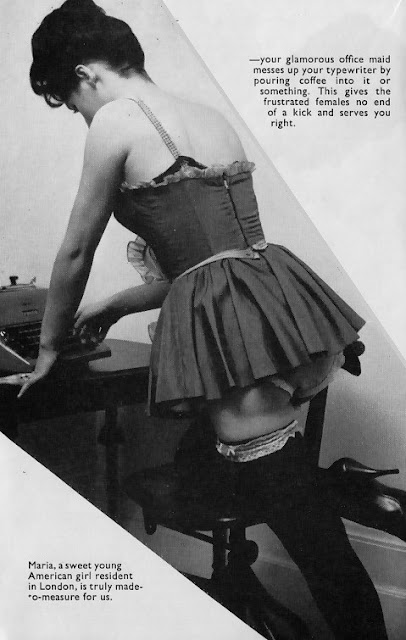 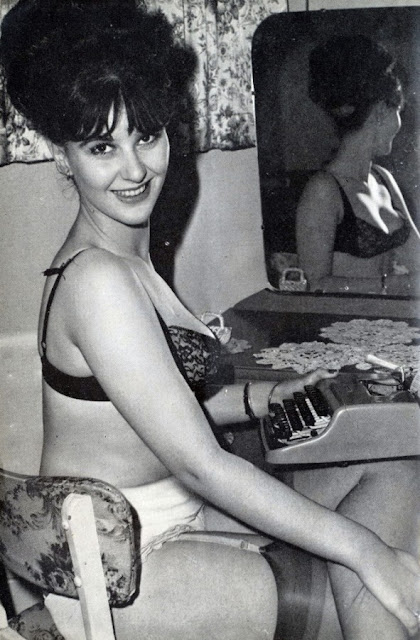 Like my one-time lady friend, the well-endowed Ruth Cavendish (aka Adele Romain) was a raven-haired stunner from Ayrshire. Ruth, seen here with an Olivetti Lettera 22,  won Miss Arbroath when she was only 15. She was one of those unhappy ToCo models subjected to the rocking horse. 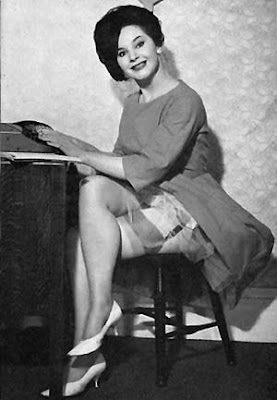 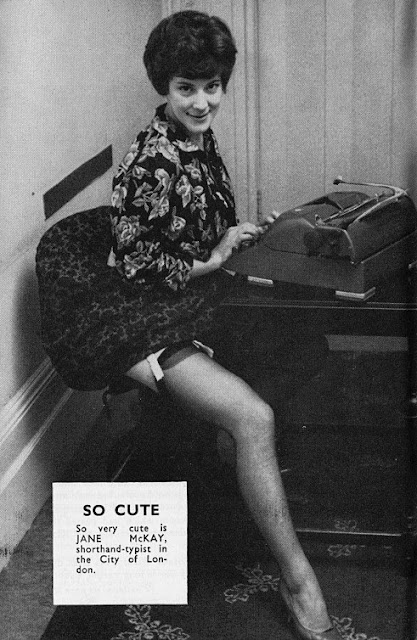 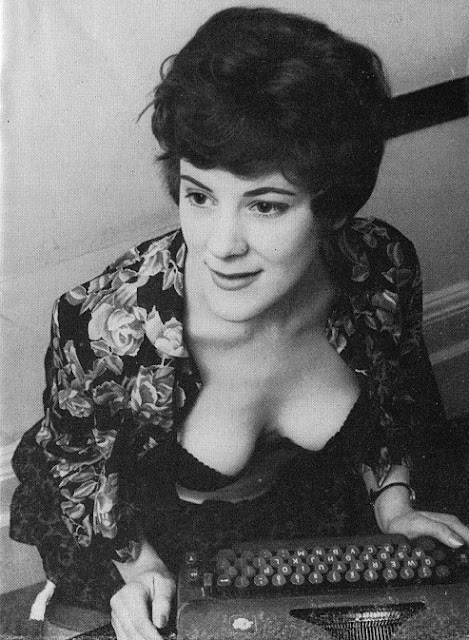 Jane McKay (aka Patrina Sargent) was a shorthand typist in London and lived in Kent - or possibly a hairdresser from Bristol who “models for the fun of it” - and was an amateur pop singer. In December 1959 a reader wrote, "I am writing to introduce you to my sister Jane, who I think is very sweet and who has the kind of personality to make life gay for everyone who knows her. I am enclosing two photographs of her and do hope you can feature her. Shelley McKay, Erith." Strangely, however, it looks like the same typewriter as featured above. 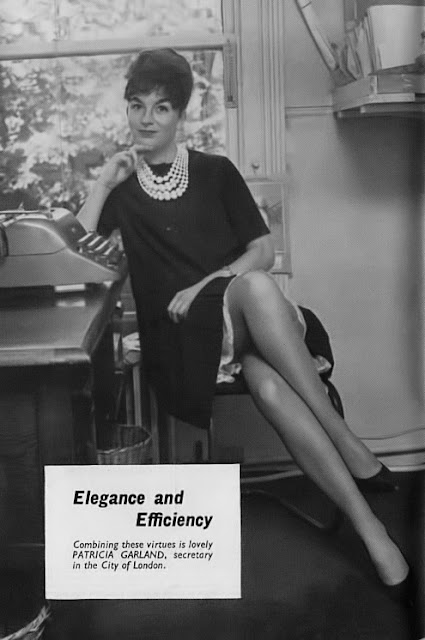 Susan Douglas (aka Patricia Garland and Pat Garwood) was by far the most prolific model used in Town and Country Publications. She came from Kent and was, variously, a secretary, an early TV adverts model, a housewife and shorthand typist who enjoyed dancing, fencing, decorating and cordon bleu cookery. 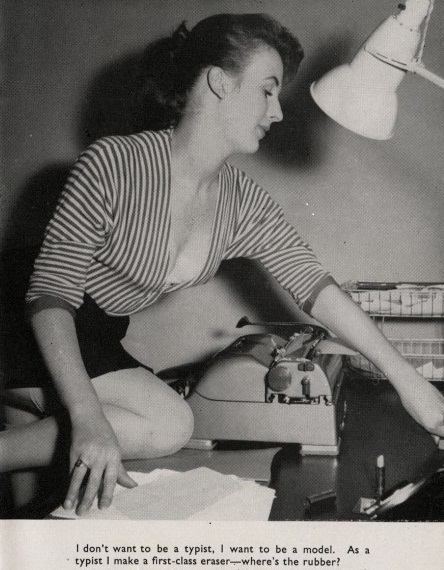 Hazel Powell (yes, it's the same mystery typewriter) had flaming red hair and big blue eyes, came from Streatham and was an extra in A Night to Remember. She liked riding, ice skating and dancing. Note the double entendre in the caption. 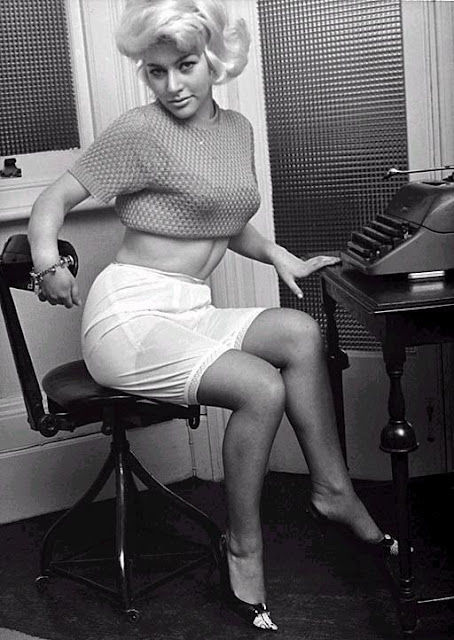 Angela Jones starred in Naked as Nature Intended, All Steamed Up and Dream of Fair Women, but hopefully not dressed like this. 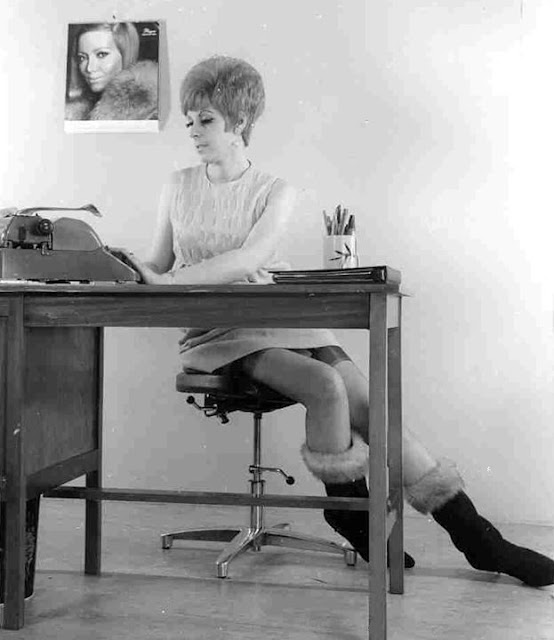 Toni Frost (with same typewriter) (aka Margaret Frost) was a happily-married Londoner. When she was not busy taking shorthand and pounding a typewriter, she loved reading and cooking – her speciality was cheese soufflés that melted before they even got into your mouth. 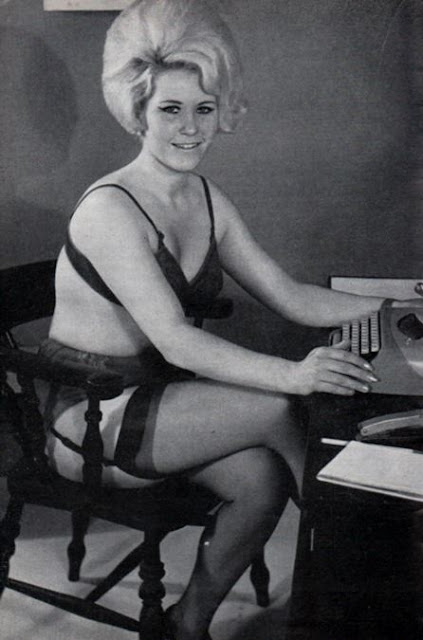 Margaret Coates from Cardiff with a Royalite. 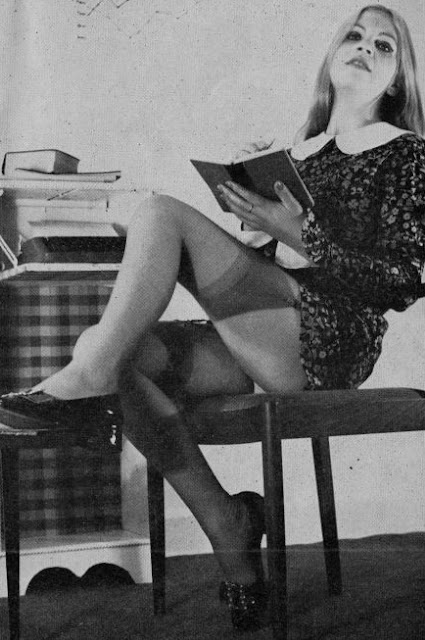 The unfortunately named Jenny Piece of Worcester.
Answer: It's an Adler Privat: 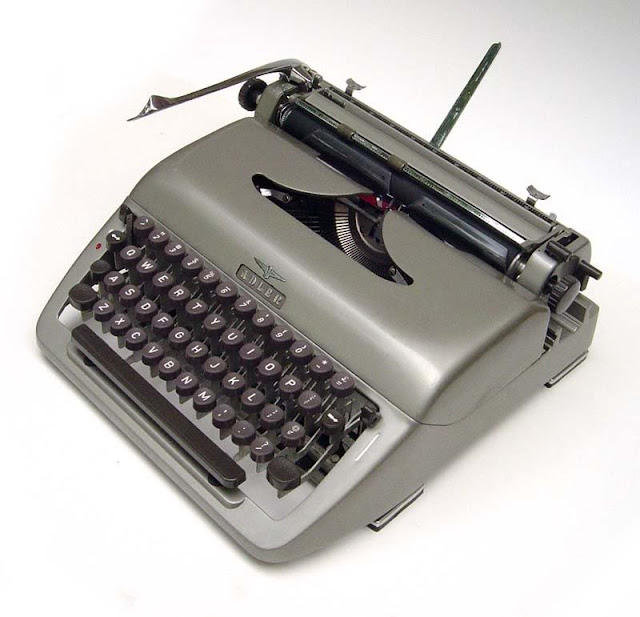 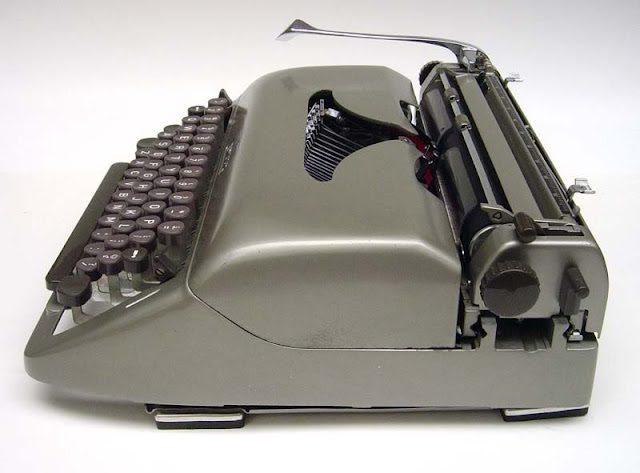 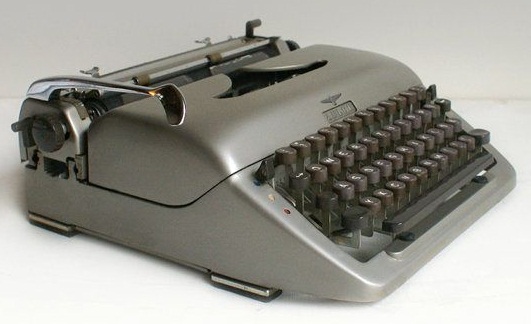 Posted by Robert Messenger at 17:34

Not many PCs and girls though (except for the x-rated out there). No PC was ever sleek or as artsy as a typewriter.

I wonder if the girls were used to sell the typewriters or only in the men's publications. I'm sure in this politically correct world many think the photos sexist or degrading while some think them great, artistic, and historical.

To me they bring back memories of when I was in school.

I suppose many of these images are meant to appeal to workplace fantasies.

I think the typewriter who had so many girlfriends was not actually an Adler Privat, but a larger and similarly styled Adler Special.

Typewriters? I didn't notice any typewriters...;)