How an Underwood wrote Typist-Corporal Bert Manders' Road to Redemption

At one time, when Bert Manders worked with future United States President Herbert Clark Hoover, as a clerk in Hoover's Bewick, Moreing & Co mining organisation on the West Australian Goldfields, he was an extremely well-liked, generous, God-fearing and popular part-time mystic illusionist and conjurer. In the early years of the 20th Century, Manders was admired across this vast, barren landscape, from Leonora and Menzies in the north to York in the east, and affectionately known as "The Wizard of the West". Manders' concern for others, and willingness to help them, extended to him giving charity legerdemain performances at the Mechanics' Institute in Boulder City, during a campaign in favour of an eight-hour working day. Another beneficiary of Manders' largesse was Bridget Leahy, the young Kalgoorlie barmaid whose legs were mangled by a train at a level crossing. When it came time for a farewell concert for Manders himself, the Federal Brass Band led the crowd down Hannan Street in Kalgoorlie to Her Majesty's Theatre.
But where were all these fair weather friends when Bert Manders' life began to spiral out of control? 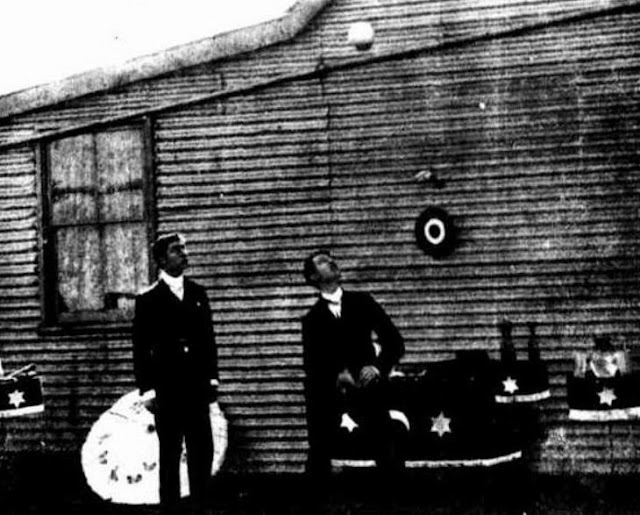 In this photograph taken by Danish-born Hans Christian Biltoft (1864-1957) at the Mechanics' Institute in Boulder City, Western Australia, in May 1902, Bert Manders performs the famous trick of throwing a cannon ball high in the air and catching it in the back of his neck. This trick was first perfected by Paul Cinquevalli (1859-1918), a German music hall entertainer whose speciality juggling act made him popular in the English music halls.
In 1907 Manders took to the bottle big time, became a hopeless alcoholic and turned to petty crime to fund his drinking habit. He was twice in court on theft charges, and spent time behind bars.
What brought about this sudden fall from grace?

Well, Manders' decline wasn't all that sudden at all. At the very time he was singing and smiling his way through his juggling and sleight of hand tricks, raising funds for the needy throughout the Goldfields, Manders was in need of a consoling hand himself. He was weeping inside, his heart shattered by three tragic events in the life of his wife, Myrtle Mary (née Wark) and himself.
The couple had had, in quick succession, three sons die as babies.
Bert and Myrtle, a South Australian, had married in Kalgoorlie on January 12, 1902, at the height of Bert's fleeting fame. Their first child, Melbourne Albert Charles Leonard "Melbie" Manders, was born that July and died in Kalgoorlie on May 21, 1903, aged 10 months 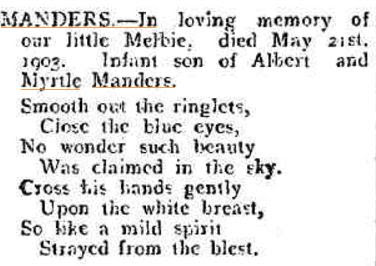 Early the next year, Myrtle and Bert lost another son, Ivan Charles Manders, aged just 11 weeks. Bert had already started his drinking binge and a pregnant Myrtle had left him in Kalgoorlie for Cottesloe when the final straw came on April 6, 1907. Their third child, Claude Manders, died at three weeks.

Nellie Stewart gold bangles
Bert was desperate to get from the Goldfields to Perth to be with his grieving wife, but on an unsupplemented salary of £6 a week from Hoover's company - paid at the end of each month - he had no money left after rent and his bouts of boozing, and normally couldn't expect any more pay before May 30. The awful truth Bert was keeping a secret was that he had been laid off by Hoover's outfit because of his drinking, and no more money would be forthcoming. So on May 11, he went into the jewelry store owned by Louis Abramovich (aka Morris) on Hannan Street, lied about his employment situation, and bought on credit a £4 10 shilling Nellie Stewart gold bangle. Straightaway, Manders took the bangle to Samuel Madorsky's pawn shop further down Hannan Street and got 25 shillings for it.

Spoke up for Manders: The Reverend Collick, with bike, second from left, at the Mount Morgans Police Station on the WA Goldfields.
Arrested and bailed, in court Manders was charged with false pretences. Anglican priest the Reverend Edward Mallan Collick (1868-1959) spoke up for him, appealing to Resident Magistrate Edward Poor Dowley to give Manders a chance and saying his sad circumstances had "driven the man to drink". Collick said he would try to get Manders some work, and that the court experience would "keep him out of trouble."
Dowley let Manders off with a slap on the wrist, saying "this will show you what drink can lead you into", and Manders did manage to get back to his wife Myrtle in Perth. But within four years he was back in the courts.  By this time the couple had had two more children, a daughter and son, who did live to a ripe old age (as did another daughter, born in Subiaco just before Manders enlisted for World War I).
Manders became involved in a land agency with an old friend from his Goldfields days, Percy Elliott Dobbie (1868-1928), originally from Dunedin in New Zealand. In August 1911, Manders was charged with theft, and he and Dobbie with false representation. At the end of September the two were discharged when the Crown entered "nolle prosequi" (a formal notice of abandonment by a plaintiff or prosecutor of all or part of a suit).

With the charges lifted, Manders managed to secure a job as a stenographer-typist with the West Australian Lands Department. On July 9, 1915, with Australian soldiers still being slaughtered at Gallipoli, he enlisted as a private for service in World War I. He was immediately sent to the military camp at Blackboy Hill at Greenmount, and at the end of August his Company C sailed on the transport Indarra to join the 32 Infantry Battalion, Australian Imperial Force, in South Australia. The battalion had been raised as part of the 8th Brigade at Mitcham on the outskirts of Adelaide on August 9, 1915. Manders embarked from Adelaide on November 18 on the HMAT A2 Geelong. He was quickly promoted to sergeant but, of all things, was given the role of a bomb thrower. 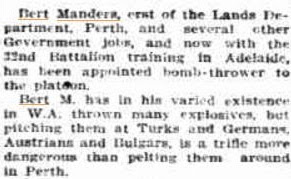 Some Diggers were to prove themselves well suited to this dangerous task, such as another clerk, Victoria Cross winner Lance Corporal Leonard Maurice Kyezor, who "caught grenades like cricket balls and threw them back". But Manders wasn't one of them. 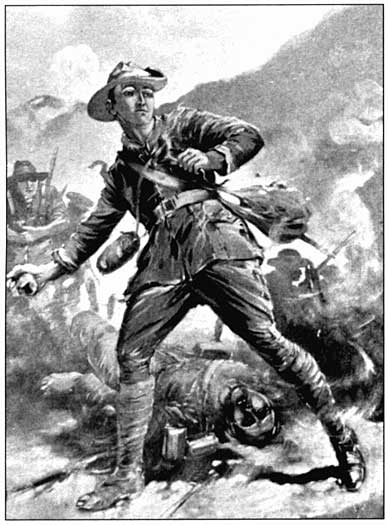 After training in Egypt, where the 8th Brigade joined the newly raised 5th Australian Division, the battalion proceeded to the Western Front in June 1916. It fought at Fromelles in July and lost almost 90 per cent of its fighting strength. It played a major role at Polygon Wood in 1917 and fought in the Ypres sector, at Amiens in 1918 and in the attack on the Hindenburg Line across the top of the St Quentin Canal tunnel. A distant relation of Mander's through marriage, Major Blair Anderson Wark (1894-1941, below) received the Victoria Cross for his leadership and bravery while leading the battalion in late 1918. 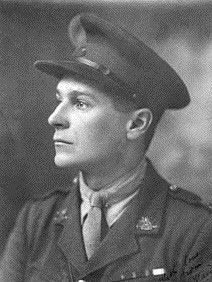 His nerves soon shattered by bomb throwing, Manders had been assigned to typewriting duties and promoted to Typist-Corporal, first at general headquarters in Cairo and later in Flanders. 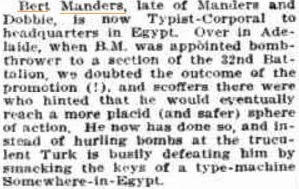 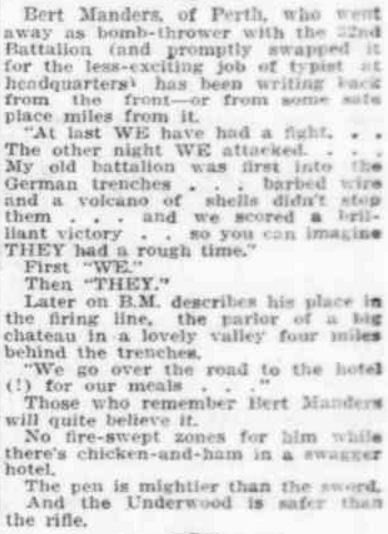 Manders joined the divisional HQ staff of Sir James Whiteside McCay (1864-1930, below), who on August 15, 1914, had been appointed to command the 2nd Infantry Brigade, AIF. McCay took over the 5th Division on March 22, 1916, and in January 1917 was put in command of the base depots in England (where Manders continued to work for him). For almost two years at Salisbury Plain, McCay efficiently trained and supplied reinforcements and controlled movements during demobilisation. Lieutenant-General Sir Brudenell White said McCay was "one of the greatest soldiers that ever served Australia … greater even than [John] Monash". In intellect and military education he was considered comparable with Monash. 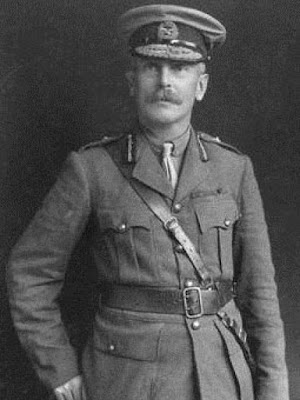 Of his typewriting experiences in France, Manders wrote to The Sunday Times in Perth: 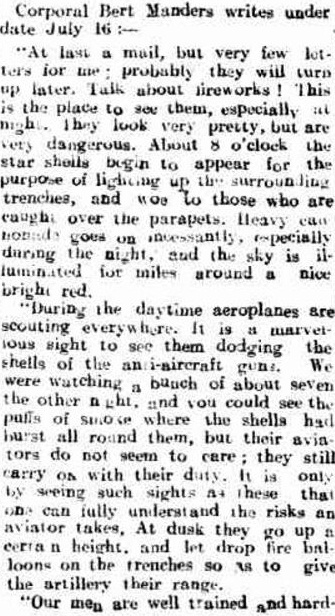 Manders returned to Western Australia in January 1918 and resumed civilian life as a journalist. His wife Myrtle died in Perth Public Hospital in October 1921 and Manders married his widowed landlady, Annie Morelini (née Riley) in 1926. Albert Wilhelm Palmer Manders, who was born at Punt Road, Richmond, Melbourne, on September 1, 1882, died on February 24, 1927, aged 44. 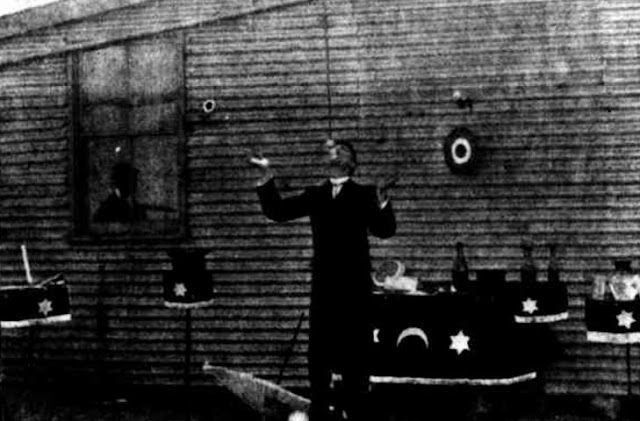 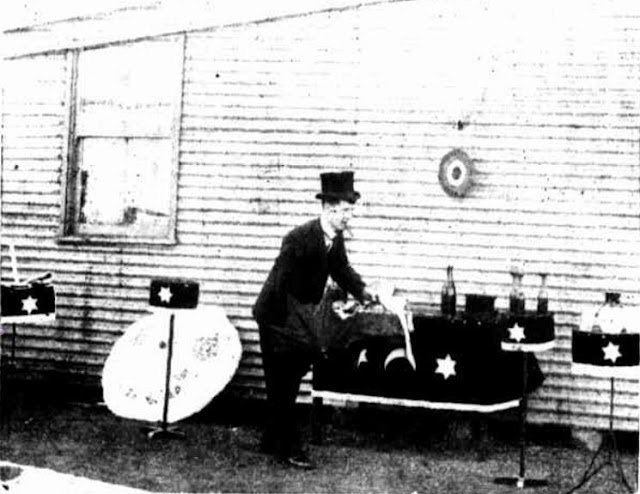 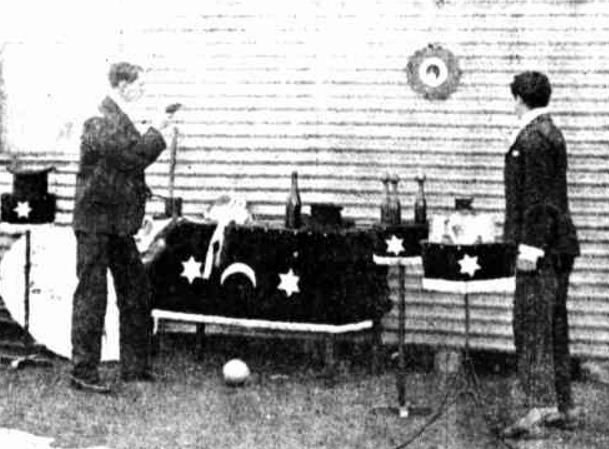 Posted by Robert Messenger at 12:36

Fascinating life story, thank you for sharing with us.

Where else would a Typist-Corporal be remembered! Colourful story. :)