The Spirit Typewriter: Outing Ouija with the 'Edison of India' 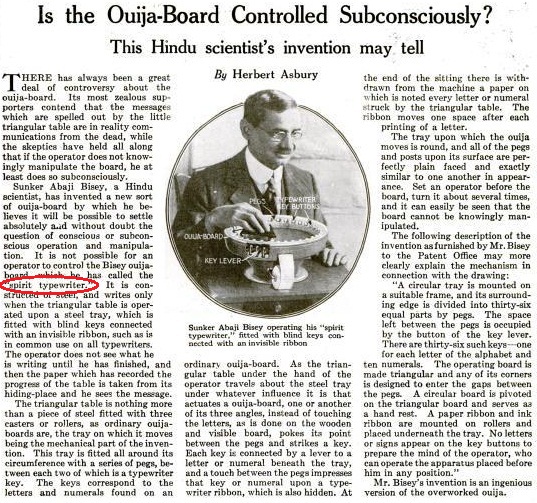 Popular Science, February 1921
Gopalswamy Doraiswamy Naidu (1893-1974) is these days referred to as the "Edison of India". However, more than two years before Naidu's National Electric Works at Peelamedu, Coimbatore, had produced India's first car, obituaries in The New York Times and the Brooklyn Daily Eagle had declared Sunker Abaji Bisey as the "Edison of India". 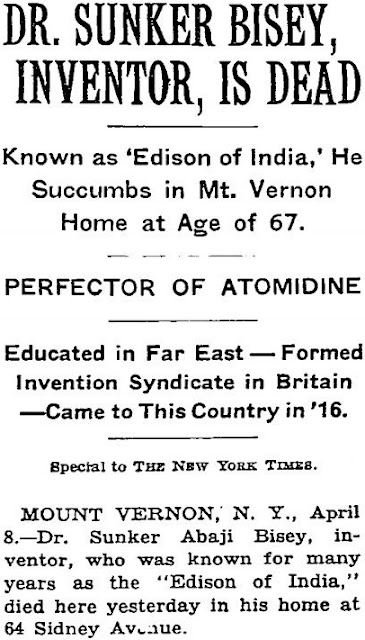 *The name Atomidine comes from a company Bisey formed in 1932, three years before he died. It is a liquid iodine preparation that was recommended as a therapeutic measure in more than 2000 "readings" (channelled writings) by the "Sleeping Prophet", Edgar Cayce, one of America's greatest psychics. Cayce had been introduced to it by Bisey in 1931. His followers maintain Cayce was able to tap into some sort of higher consciousness, such as a god or the akashic record, to get his "psychic knowledge." In 1910 atomic iodine treatments had saved Bisey's life from malaria infection he contracted in France. 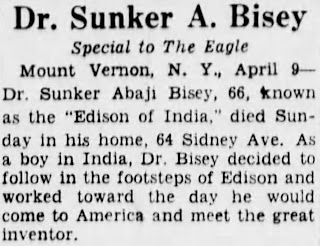 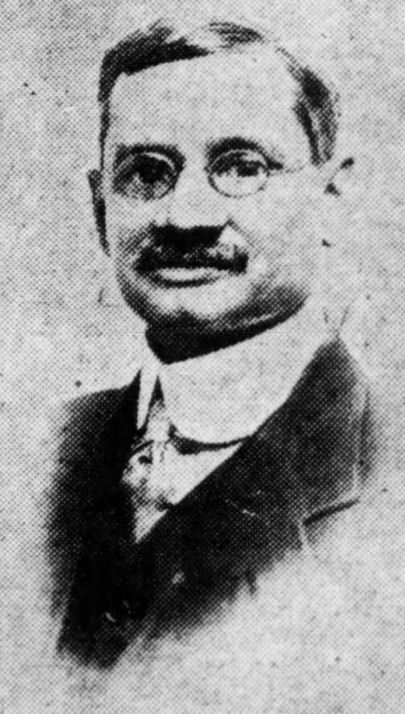 Sunker Abaji Bisey
Bisey is also known for two other inventions, the Ideal Type-Casting Machine and the "Spirit Typewriter" (Spiritualistic Communication Apparatus). His typecaster was the first to use a universally adjustable non-rubbing mold for casting single type. It also made lead rules. 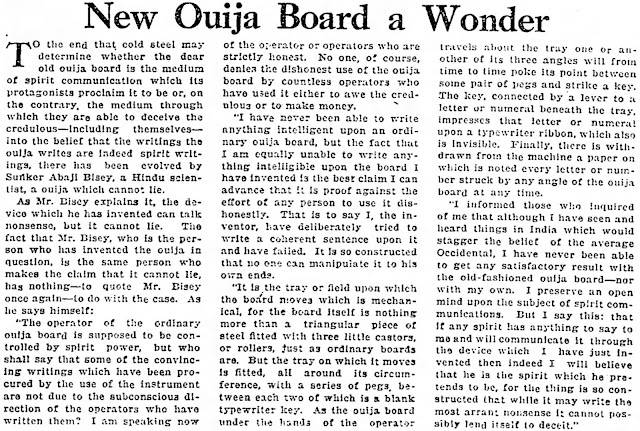 The Bisey-Ideal Typecaster Corporation, or Biso-Type Ltd enterprise, dates from before Bisey's move from Britain to the United States. It started life as the Multiple Type-Casting Machine, first constructed in 1903. Bisey took an improved and modified unit to the Universal Type-Casting Machine Company of New York in 1916 and by April 1917 had completed work on his ultimate machine. With Bisey as director and technical adviser, his company was incorporated in August 1920, and headquartered at 8th Avenue and 40th Street West in New York City. But by November 1929 it was in such financial strife it couldn't pay its bills. Almost nothing is known of it today. One of the directors of Biso-Type was Henry Mayers Hyndman (1842-1921), a Cambridge-educated supporter of Indian self-rule and founder of Britain's Social Democratic Federation and the British (later National) Socialist Party.
All the while, Bisey was mixing his typecaster operation with his work promoting Atomidine through his American Beslin (“best liquid iodine”) Corporation, making a product he had first marketed in England in 1913. In 1926 Laboratoire Durveaux purchased Beslin and six years later Bisey formed Atomidine. Meanwhile, in 1917, Bisey patented a washing compound called Rola. 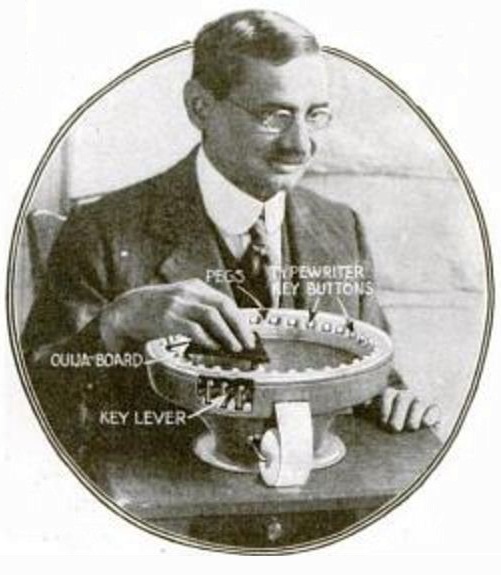 Bisey was a Maratha engineer born in Bombay (now Mumbai) on April 29, 1867. He studied at the Dhulia High School and after completing his education in 1887 entered the Public Service as an accountant's clerk. In 1895 Bisey exhibited optical illusions in Manchester and London and two years later won a Inventors' Review and Scientific Record prize for a machine which automatically weighed and delivered from bulk powder substances such as ground coffee, sugar and flour. He left India in May 1899 and his inventions in England from 1899 to 1908 were various automatic advertising machines. Some of these were revolving lamps with lights of different colours for display, exhibited at the London Coronation Show in 1902. By this time he had formed the Bisey Inventions Syndicate, with the backing of Sir Ratanji Tata (1871-1918), an Indian financier and philanthropist who was the son of the noted Parsi merchant Jamsetji Nusserwanji Tata (1839-1904). Tata senior was a pioneer industrialist who founded the Tata Group, India's biggest conglomerate company. Tata is regarded as the "Father of Indian Industry". Bisey also had financial support from Dadabhai Naoroji (1825-1917), known as the Grand Old Man of India, a Parsi intellectual, educator, cotton trader, and early Indian politician (a founder of the Indian National Congress) and social leader. Naoroji had been a Liberal Party Member of Parliament in the House of Commons (1892-95), the first Asian to be a British MP. 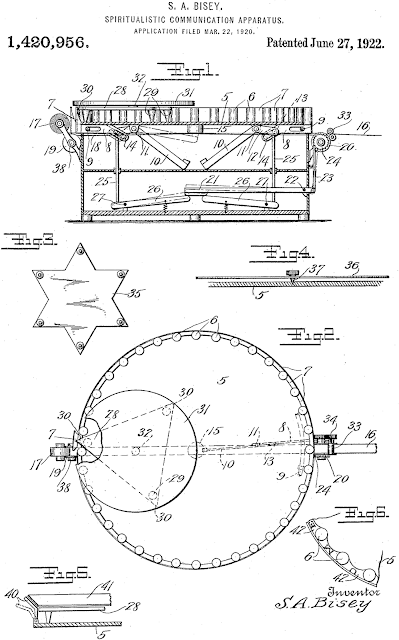 In March 1920 Bisey applied for a patent for a foolproof alternative to the then popular Ouija board. His Spirit Typewriter operated with a triangular planchette that depressed typewriter-like keys. As the circular device was spun first, and the messages typed out-of-sight from the bottom of the device, the idea was to receive communications from the dead ("spirit operator") untainted by human influence. Bisey only made one copy of his invention - being counter-productive, it was hardly likely to be purchased by an Ouija-obsessed nation. 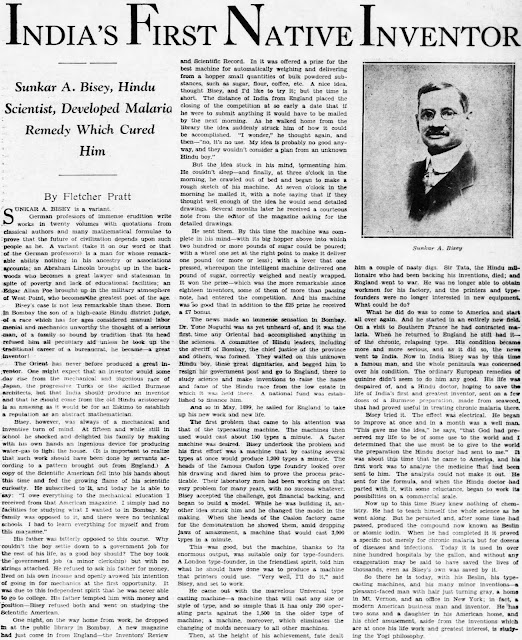 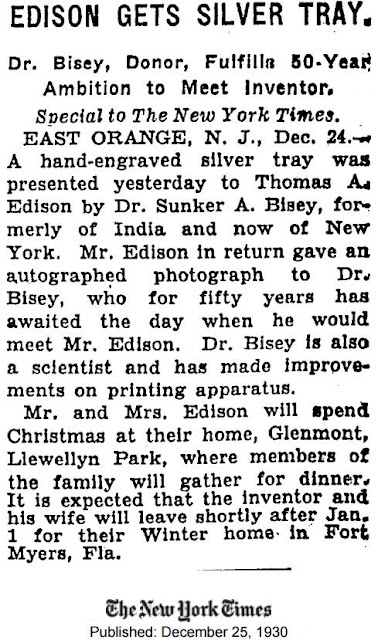 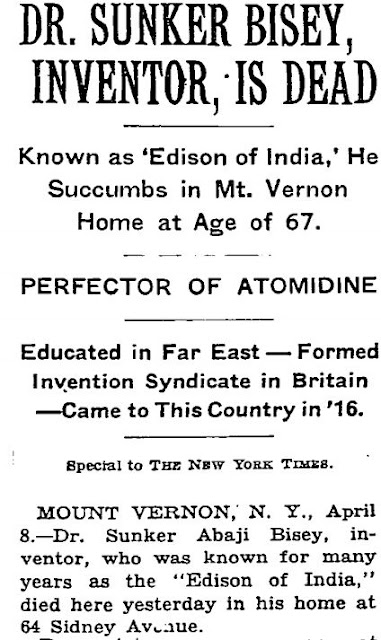 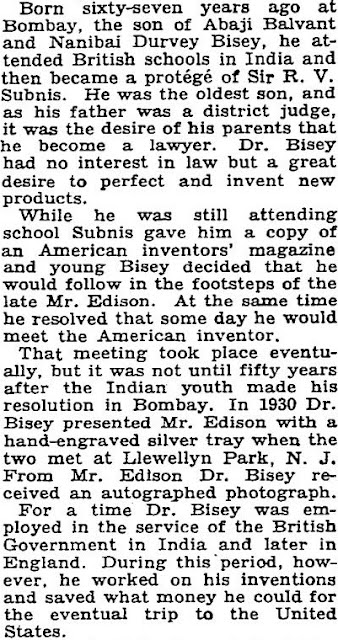 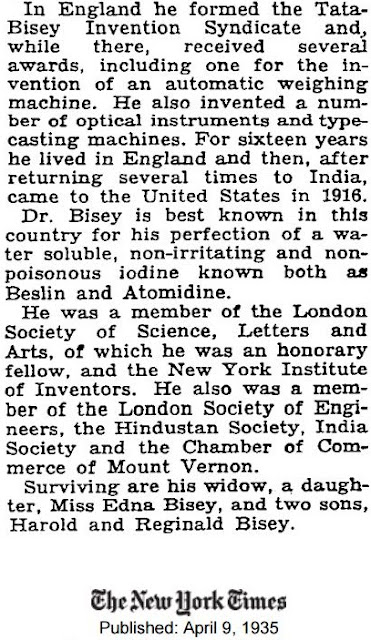 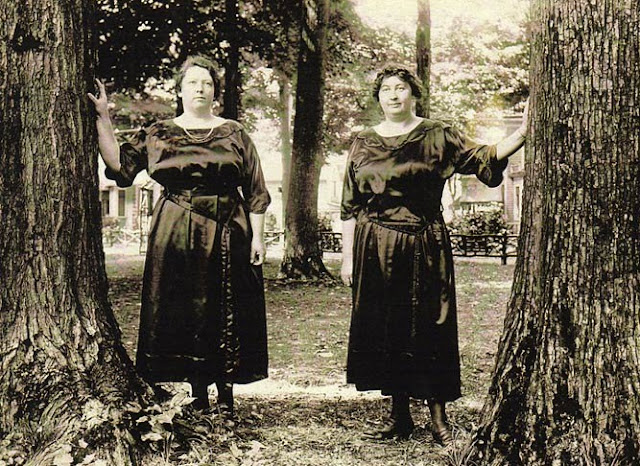 More bangs for your bucks: Lizzie and May Bangs
The idea of spirits using typewriters had been around long before Bisey's machine came along to debunk the nonsense. In 1893, a spiritualist newspaper reported that a Smith Premier typewriter began to write by itself during a séance with a medium named Lizzie Bangs: “The medium does not touch the typewriter at all; it is used independent of or without contact from the medium’s hands or fingers. There is no holding or hesitating in the action of the machine; on the contrary, you hear that it is operated with an astonishing degree of swiftness and dexterity.” 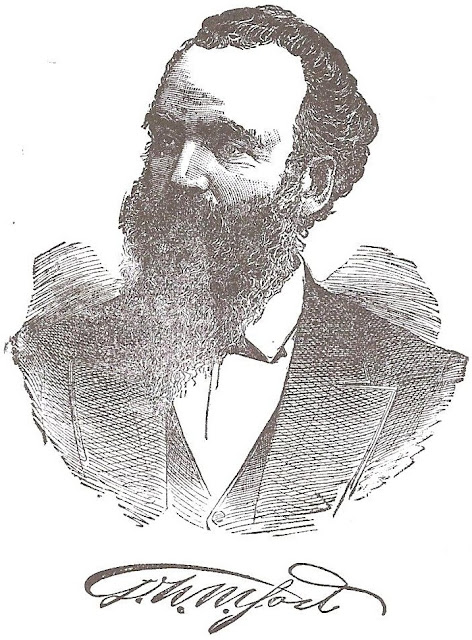 One of the most enthusiastic attendees at Bangs’ 1893 séance was typewriter entrepreneur George Washington Newton Yost. In 1895 Yost financed a similar event at Carnegie Hall, showcasing the sham skills of the notorious Chicago charlatan Henry R. Rogers. Later that year, a few months after Yost’s death and four years after spiritualist Helene Petrova Blavatsky, the founder of Theosophy, had died, Madame Blavatsky’s “text” (described as “furnishing strong, internal proofs of its apocryphal character”) was dictated by the long dead lady's spirit, and “obtained in independent typewriting on a Yost machine under the supervision of the spirit of its inventor, Mr G. W. N. Yost”. Yost’s transcription of Blavatsky’s words from the grave led to Posthumous Memoirs … Dictated from the Spirit-World under the Supervision of G. W. N. Yost, published by Joseph Marshall Wade, of Boston, in 1896. In the early 20th Century that wicked Manchurian William Thompson Braham (1846-1910) invented a “wonderful spirit communicator” modelled on early index typewriters. 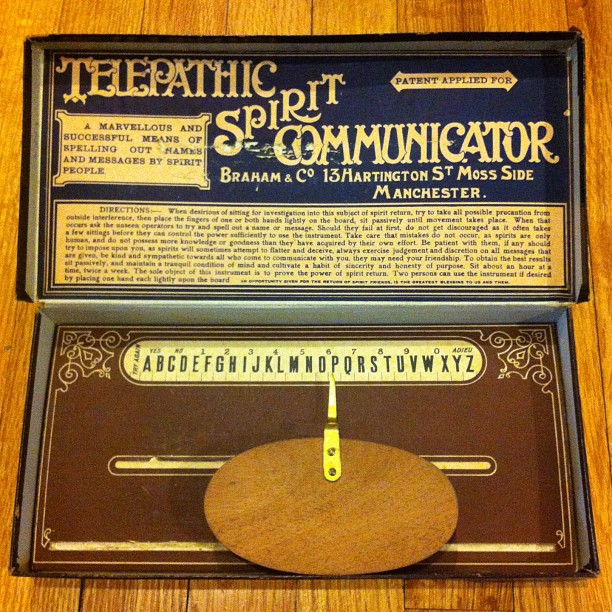 Posted by Robert Messenger at 00:40

A fascinating topic. I can believe that there was no market for a foolproof "spiritualistic communication device."

The book "The Iron Whim" has quite a bit, as I recall, on the ghostly aspects of typewriter culture.

Reminds me of The Enchanted Type-Writer (1899) by John Kendrick Bangs. From Wikipedia: "Bangs attributes many of the stories to the late (and invisible) James Boswell, who has become an editor for a newspaper in Hades, and who communicates with the author by means of an old typewriter. "

You can read the full text on Project Gutenberg:
http://www.gutenberg.org/ebooks/3162