' ... God is always on the side of the biggest typewriter ... My only regret is that I have but one typewriter to lay down for my country'
- Scathing satire aimed at "Uncle Sham", aka typewriter wielding president Woodrow Wilson, by US anti-pacifist Porter Emerson Browne. Browne's words were avidly turned into newspaper cartoons in Australia in early 1916. 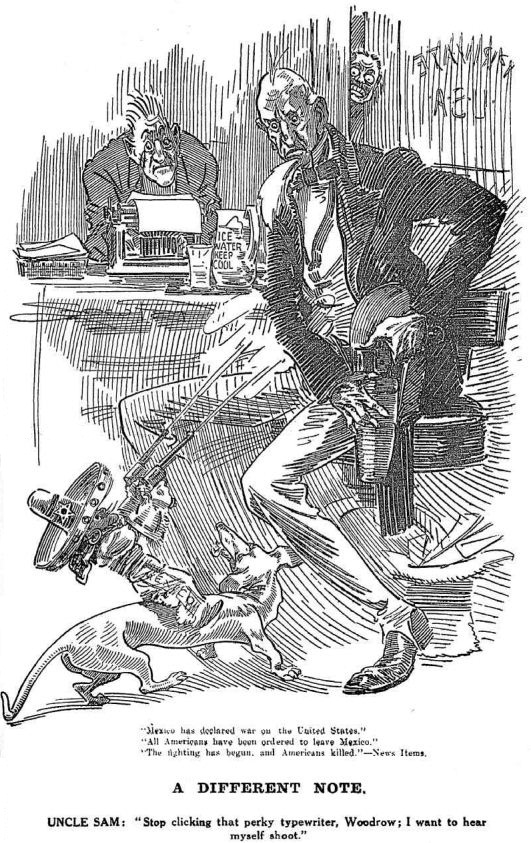 That's Woodrow Wilson at the typewriter, "Uncle Sham" drawing the six-shooter and Mexican Revolution leader Francisco (Pancho) Villa (José Doroteo Arango Arámbula) riding on the back of the chihuahua in this rather vicious June 1916 Australian newspaper political cartoon from David Henry Souter (1862-1935). The cartoon implies Wilson was spending too much time sending typed notes to Mexico and Germany and not taking enough direct action against these countries. In January 1916 Souter threw this nasty brickbat at America (other examples of his hardline wartime work can be seen in PDF form here): 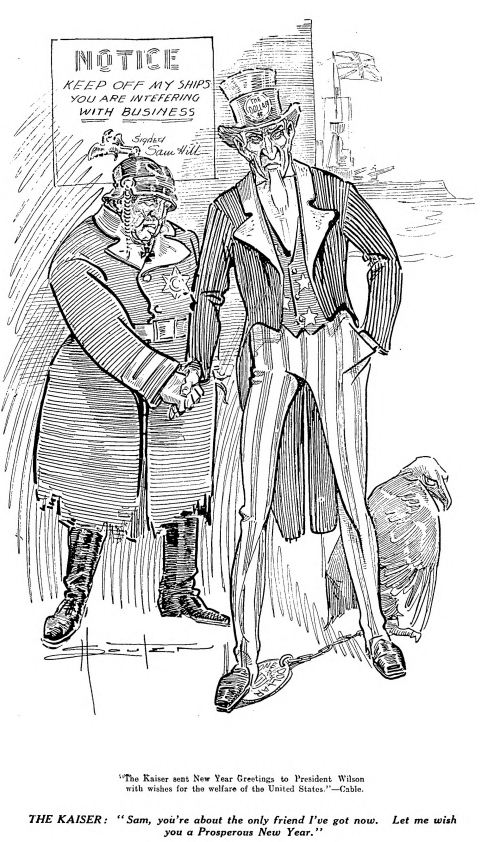 Emotions were running high in Australia 100 years ago, as surviving Diggers made their way from Gallipoli to France for another round of needless blood-letting, and an inglorious World War I headed into its third barbarous year. Meanwhile, German U-Boats were slaughtering innocents on the high seas and pushing American neutrality to the brink. To the astonishment of Australians and Britons, however, US President Woodrow Wilson, re-elected to office at the end of 1915 on the back of an avowed policy to keep the US out of the European war, tried to calm bloodied waters by typing "cease and desist" notes to the Germans. In Australia and Britain, these notes - typed on a military green Hammond Multiplex - became the subject of an intense campaign of newspaper ridicule. Woodrow Wilson came to be titled by the Press in both countries as "Wontrow Wilson", a none-too-subtle dig at his determination to avoid involving the US in a "row" (as in a confrontation). Shells which failed to explode on the Western Front were called  "Wilsons". 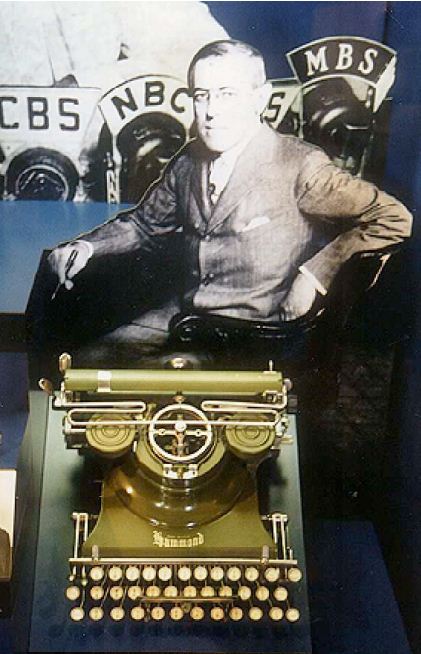 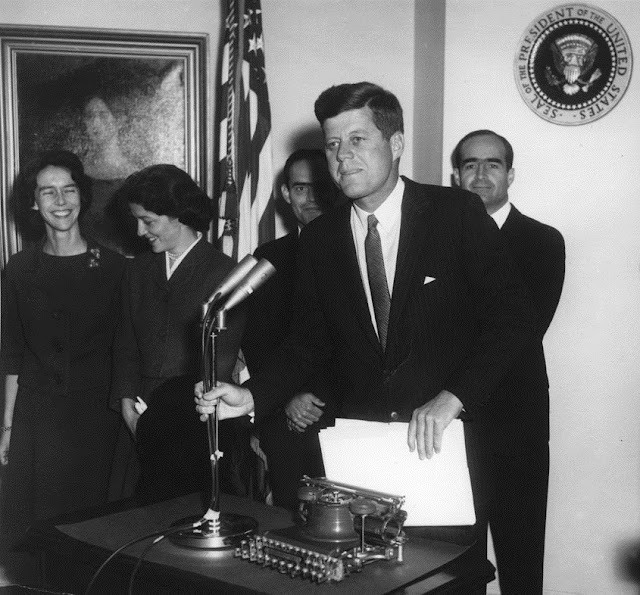 At Versailles in 1919, after the dust had settled, Wilson called Australian Prime Minister Billy Hughes (a Corona 3 user) a "pestiferous varmint”. But in 1916, Wilson wouldn't have been too concerned about catching some infection from the constant barbs coming from the Press Down Under - nor from Fleet Street across the Atlantic, for that matter. His re-election was taken as a sure sign that public opinion on the war issue was still very much on his side (his GOP opponent, Charles Evans Hughes, had taken no firm stand on the question). Nor would Wilson have considered Australia a troublesome wild nation - nor indeed given much thought to it being a future war ally. Given his problems with Germany and Mexico, Australian Press criticism would have been at the very outside a minor irritant for Wilson, in the unlikely event he noticed it at all. Had he done so, Wilson might have suggested to Australian newspapers, as he did in the US, that they get some bishops on to their editorial staffs - so as to gain more confirmations! 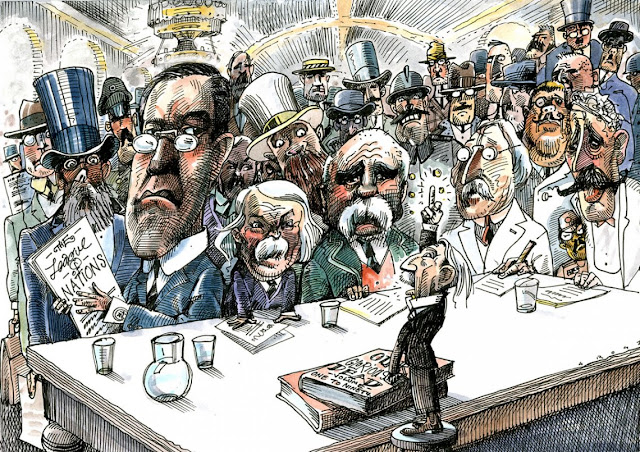 How a modern-day Australian artist saw the confrontations between Woodrow Wilson and Billy Hughes at Versailles in 1919. Hughes's speeches were described by one critic as "music played on a typewriter". The main point of contention in Versailles was New Guinea, which the US wanted as a naval base in the south-west Pacific. With the benefit of hindsight, we should have let them have it.
Notwithstanding the fact that the Republican Party's candidate, Charles Evans Hughes, had taken no pronounced position on the US entering the war, some sections of the Australian Press indulged in much wishful thinking, in November 1915 declaring in large headlines that Wilson had failed to win re-election and that Hughes was the new president. Both major Melbourne dailies, The Age and The Argus, somehow managed to come to this false impression, despite Wilson defeating Hughes by nearly 600,000 votes in the popular vote. Their bold declarations of a GOP win were echoed in America 33 years later, when the Chicago Daily Tribune, forced to typeset its pages with Varitype typewriters, announced another Republican, Thomas Edmund Dewey, had beaten Harry Shipp Truman in Truman's bid to return to the White House. Truman won by 2.189 million in the popular vote. 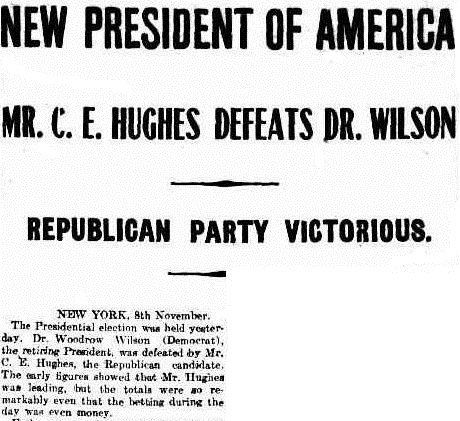 Once the truth that Wilson had actually been re-elected eventually dawned on Australians, the nation's Press began to open up both barrels on the man it came to dub "Wontrow". As much as Australians might have been prepared to accept that Wilson had been returned to office on the pacifist stand he had taken in his re-election campaign, matters were brought to a head on December 30, 1915, when the SS Persia, a P & O passenger liner, was torpedoed and sunk without warning by Max Valentiner's German U-boat U-38. The Persia was sunk off Crete, while the passengers were having lunch - 343 of the 519 aboard perished. In Britain and Australia, it was quickly assumed that this latest atrocity in Germany’s policy of unrestricted submarine warfare would force Wilson's hand, and instantly bring the US into a decisive role in the European war. (The RMS Lusitania was torpedoed and sunk by a German U-boat on May 7, 1915, causing the deaths of 1198 passengers and crew.) 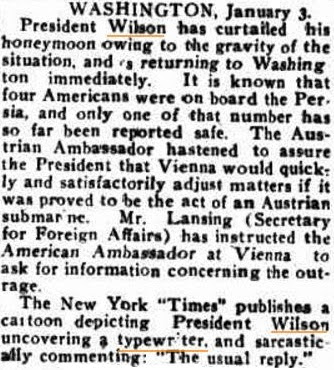 An indication that American public opinion might have been beginning to swing toward supporting US involvement in the European war came from a cartoon which appeared in The New York Times on January 3, 1916, showing Wilson uncovering his typewriter and commenting "The usual reply". Sadly, I have been unable to find this cartoon, but similar work appeared on both sides of the Atlantic in the period between May 1915 and October 1916. These were cartoonists' responses to three notes Wilson sent to the German Government, on May 13, June 9 and July 21, 1915. The first note affirmed the right of Americans to travel as passengers on merchant ships and called for the Germans to abandon submarine warfare against commercial vessels. In the second note, Wilson rejected German arguments that the British blockade was illegal and their charge that the Lusitania had been carrying munitions (then Secretary of State, the pacifist William Jennings Bryan, considered this too provocative and resigned in protest). The third note issued an ultimatum, to the effect that the US would regard any subsequent sinkings as "deliberately unfriendly". Germany responded on August 19 when the U-24 sank the White Star liner SS Arabic, with the loss of 44 passengers and crew. Thus the sinking of the Persia was expected, in Britain and Australia, to be the last straw. It was not. 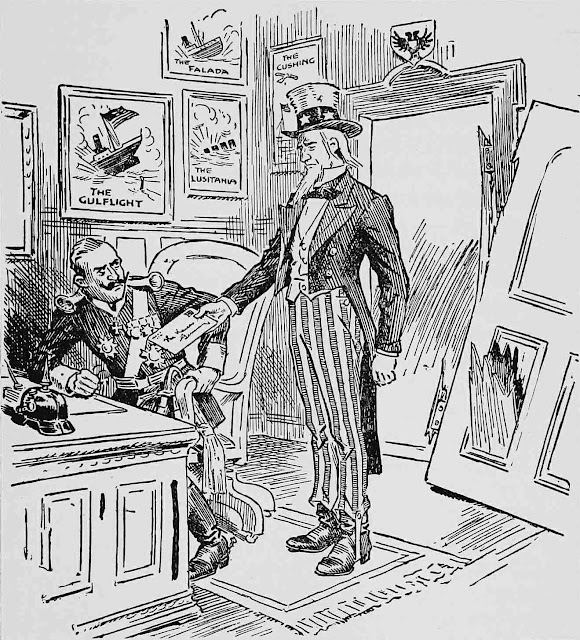 A "stern note" about the Lusitania, but no action. 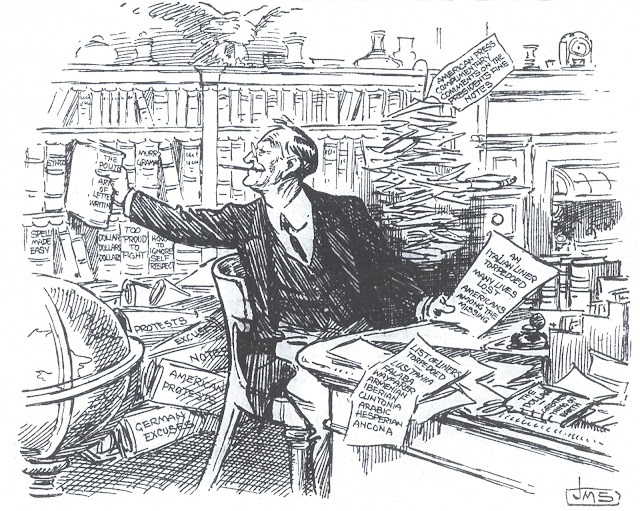 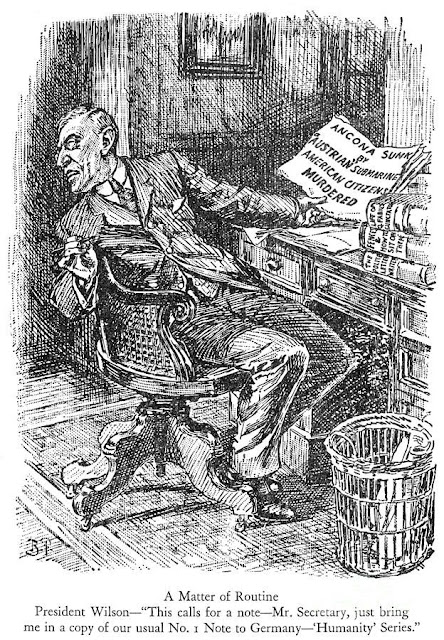 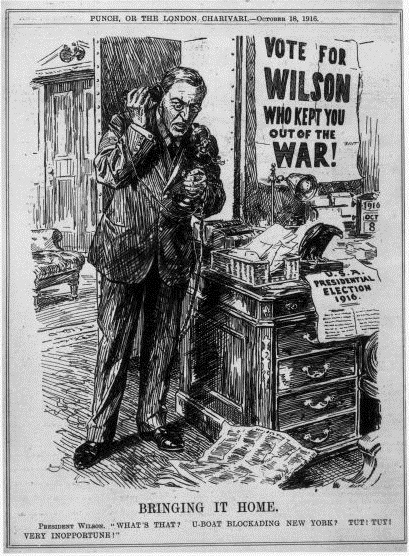 One of the best efforts from an Australian political cartoonist was this one in April 1916, by John Charles Nuttall (1872-1934) in Melbourne's Punch, showing Wilson hiding behind the skirts of "Columbia" (the earliest known personification of the United States was sometimes associated with Liberty). American Discretion: The Kaiser positively refuses to let up in his submarine crusade to mollify the Americans. Columbia (splattered with insult, mud, blood and murder): "At least you might throw something back at the beast, Woodrow." Wilson: "No, no, no! It would only excite him to greater frenzy." 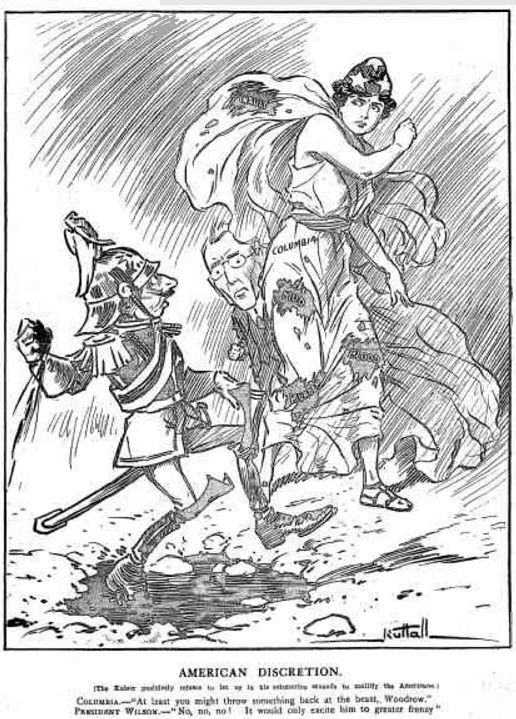 By 1915, Wilson's regular habit of using his own typewriter to write official documents was well known to Australian and British readers, the machine providing columnists in both countries with a metaphoric "shorthand" word, a readily recognisable means of attacking the President. Among the most persistent critics of Wilson's typewritten notes and the US's ongoing policy of neutrality was the vitriolic Charles John Haynes, editor of The Newsletter: an Australian Paper for Australian People. Haynes wrote a column called "The Wasp", and during this period he and other like-minded Australian journalists rarely let an opportunity go by to take bitterly satirical potshots at Wilson and his typewriter: 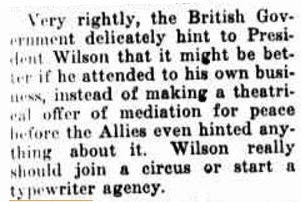 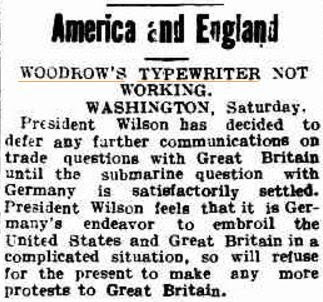 ("bigger biff in his mitt = more power in his fist)

In this environment, Australian newspapers were only two quick to pounce on a dissenting voice from within the US - and that was provided by the American writer Porter Emerson Browne (1879-1934), who wrote with tiny figurines on a miniature stage beside his typewriter, and whose biting satire, in the form of "Uncle Sham", was gleefully re-published in this country: 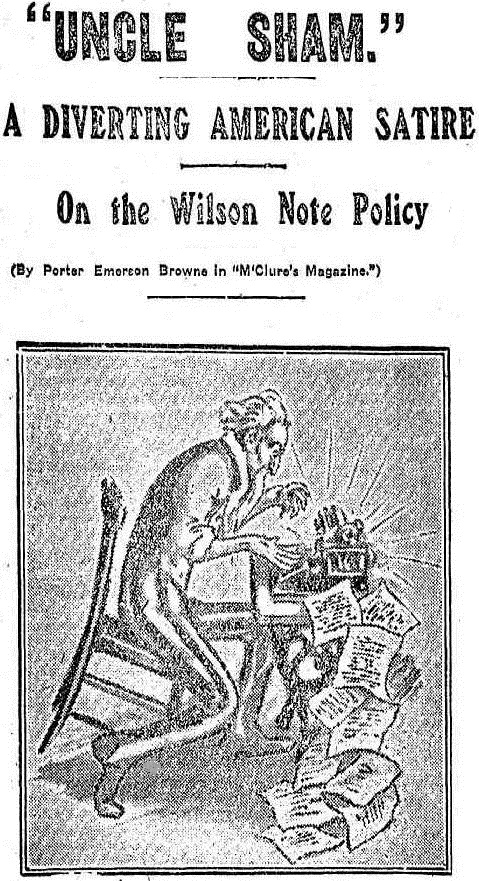 Browne was an avowed anti-pacifist, best known for his stage and screen plays. The "Uncle Sham" chapter can be read in his 1917 book Scars and Stripes, which he dedicated to Theodore Roosevelt. 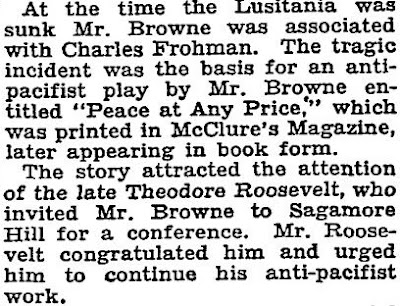 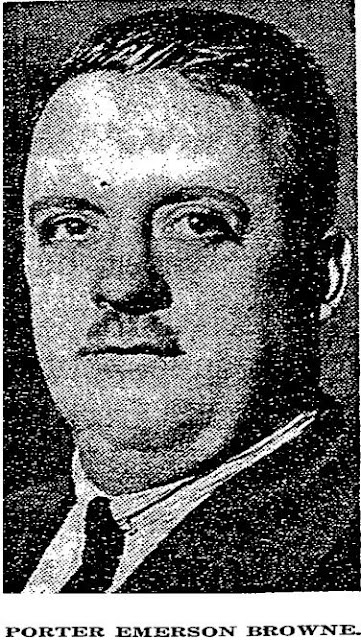 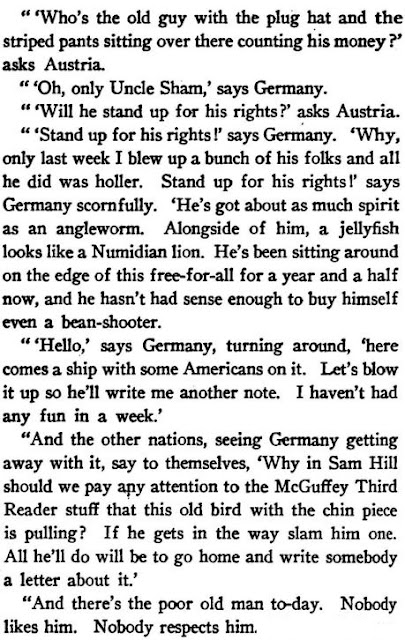 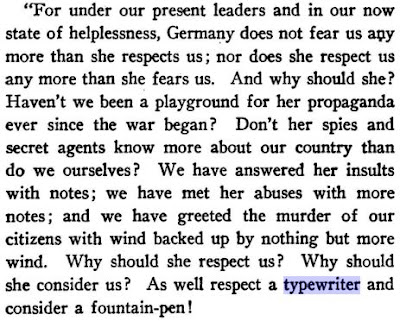 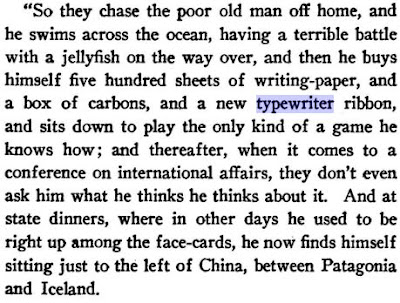 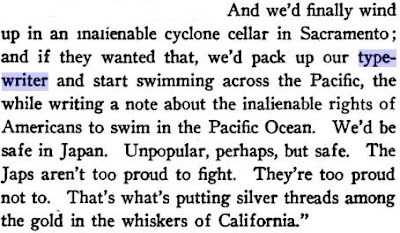 As well as being inspired by Browne's writings, Australian newspaper cartoonists took up the theme of certain US political cartoons: 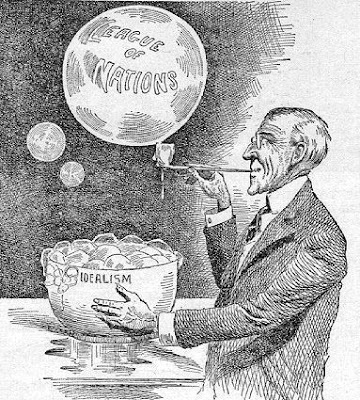 Yankee Bluff: "But when will Woodrow cease to blow, and with the Allies fight?" 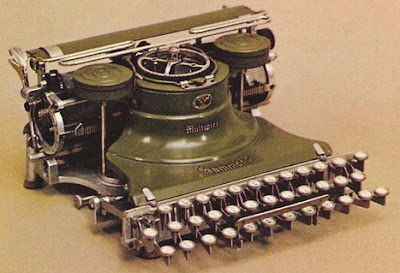 That Wilson was an incessant user of his Hammond typewriter is clearly indicated by these New York Times articles from the period: 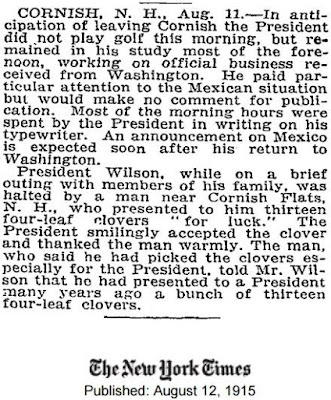 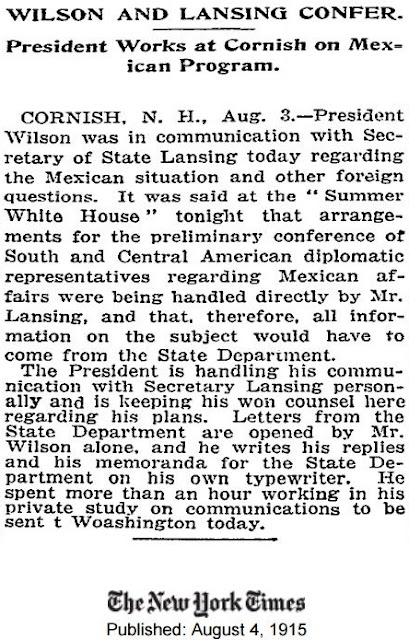 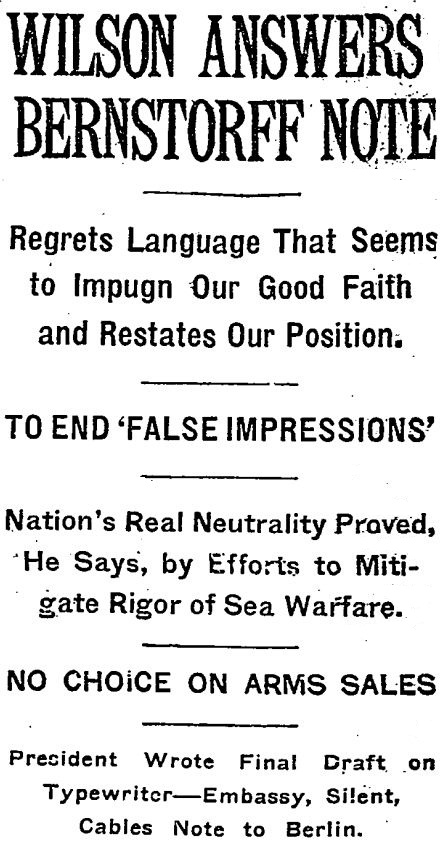 Quite interesting. It seems that Wilson's typewriter really became a cliché among his bellicose enemies.

Just a moment... Is Ted Roosevelt who's behind the door watching the match between Mexico and Uncle Sam?