The Hammond in Wonderland: Lewis Carroll's Typewriter Through the Looking Glass 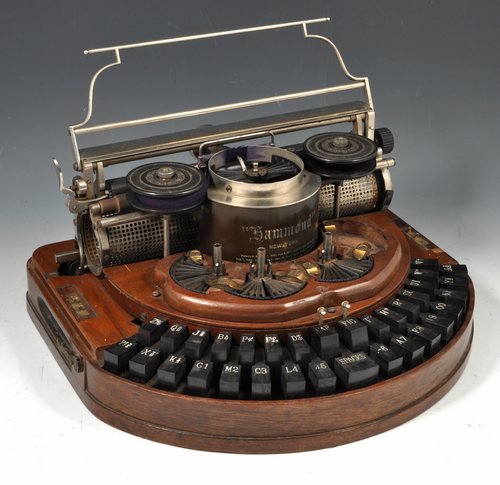 Lewis Carroll's Hammond Model 1 typewriter
with Ideal keyboard (serial number 5621), sold to him by Witherby and Company of 74 Cornhill, London, on May 3, 1888 (when the author was 56) and now in the possession of American Carroll scholar and author Charlie Lovett.
It apparently remains in good working order and has four typeshuttles in different fonts, three of them housed in a wooden mounting on top of the front section (a very unusual extra). Below is an example of the Model 1 (serial number 9980) without the mounting for the spare typeshuttles. It was presumably optional - or was it Carroll's own idea? The split shuttles were folded together when stored in the mounting. 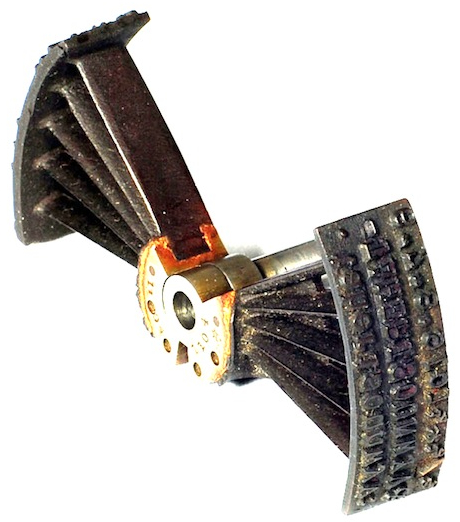 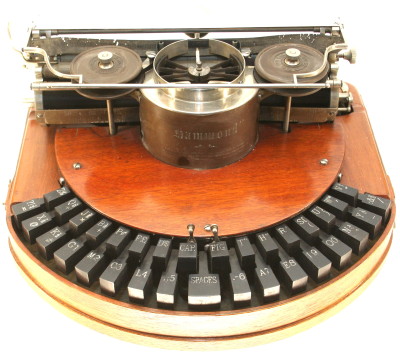 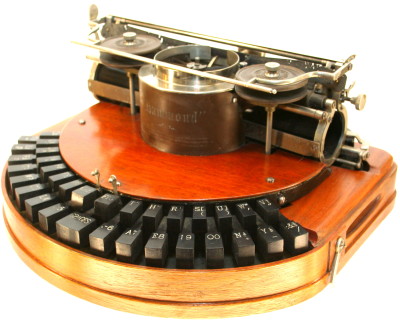 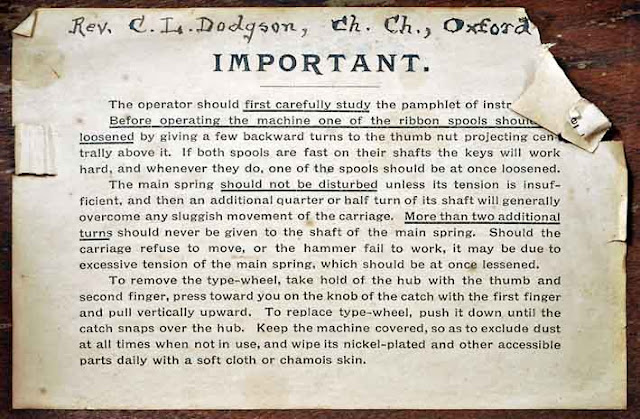 Carroll's real name, Charles Lutwidge Dodgson, and his Oxford University college, Christ Church, written by Carroll inside the case (below) of his Hammond typewriter. 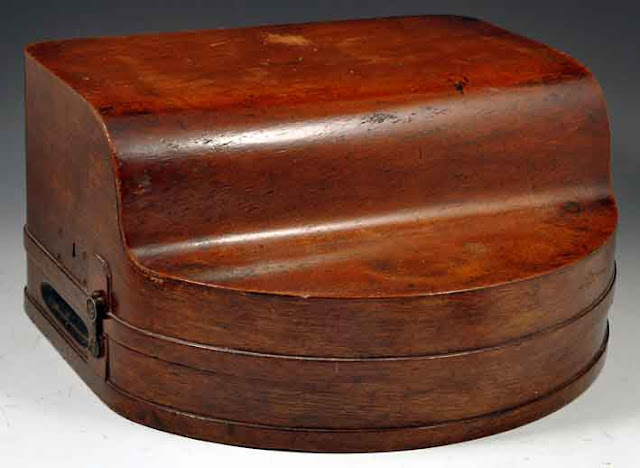 For some time now I have been in the habit, when loitering with intent at a bookbarn, to pick up an interesting-looking book and turn to its index to see if it contains the word "typewriter". I rarely have any success, but just before Christmas (and still during the 150th anniversary of the publication of Alice’s Adventures in Wonderland) I came across The Mystery of Lewis Carroll: Discovering the Whimsical, Thoughtful and Sometimes Lonely Man Who Created Alice in Wonderland, by Jenny Woolf. This offered a bonus, as there were two pages mentioning typewriters, so I had to have it at a princely $10. 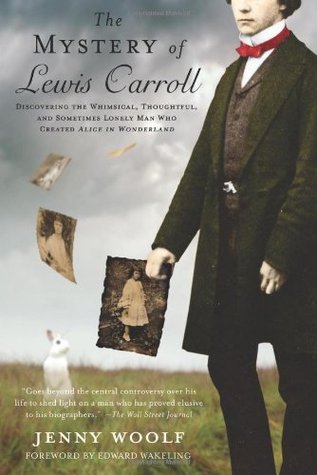 Through the meticulous research over 18 years by Peter Weil - which Peter is always only too happy to share, for the sake of our collective knowledge of typewriter history - I had been well aware for some time that Charles Lutwidge Dodgson's "early typewriter" was a Hammond. I was under the impression, however, that Dodgson had used it exclusively for his mathematical texts. Among other uses he put the Hammond to was in replying to requests for material, typed in the third person. Its present owner, Carroll scholar Charlie Lovett, says Dodgson "mostly used the typewriter to amuse his young friends, who would 'print poetry' on it". 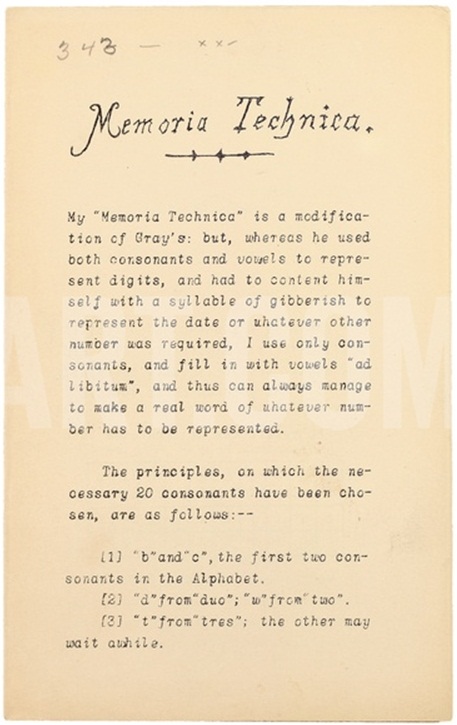 One of Dodgson's first uses for his Hammond was to type a new edition
of his Memoria Technica in June 1888.
Little did I realise just how much is known about Dodgson's Hammond, or that it had come up for auction at Market Harborough in Leicestershire, England, on March 5, 2012. It sold for £7475 (including the 15 per cent buyer's premium, adding £975; that's about $US11,000 all up at today's exchange rates, an absolute bargain in my humble opinion). We know a lot about the typewriters owned and used by many famous authors, but seldom do we have information on when and where those machines were acquired by those writers, who taught them to use the typewriter, or - perhaps more importantly - what became of the typewriters. Amazingly, when Dodgson died on January 14, 1898, his Hammond was sold as part of the disposal of his estate for a mere £6 - to his own brother, Wilfred Longley Dodgson (1838-1914, below). 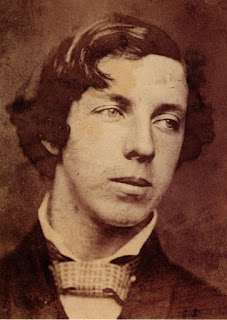 Charles Dodgson's typewriter instructor was the classical scholar Henry William Chandler (1828-89), from 1867 the Waynflete professor of moral and metaphysical philosophy at Pembroke College, Oxford, and from 1884 a curator of the Bodleian Library. Dodgson's diary entry of May 4, 1888, says, "Chandler came across to show me how to work the 'Hammond Type-Writer', which arrived yesterday." How Chandler came to know about using a typewriter we may never know. And given Chandler, an insomniac, was in the habit of dosing himself up with chloral and prussic acid, we can only imagine how patient a typewriter teacher he was. But Dodgson's natural penchant for gadgets probably meant he needed very little tuition. Chandler died a year and 13 days after Dodgson had acquired the Hammond.

Sixteen days after taking possession of his Hammond, on Saturday May 19, 1888, Dodgson recorded a visit from a representative from Witherby and Company, the London firm which had sold him the machine. This was possibly a standard "customer service" follow-up, to ensure safe arrival from London and satisfactory performance. The agent was passing through Oxford and called in to discuss the typewriter with Dodgson. Witherby's, a major stationery company (which still exists) was the original British agent for Hammond (along with the more popular Hall index typewriter), but in 1890 Hammond established its own branch office in London, on "typewriter row" at 50 Queen Victoria Street. 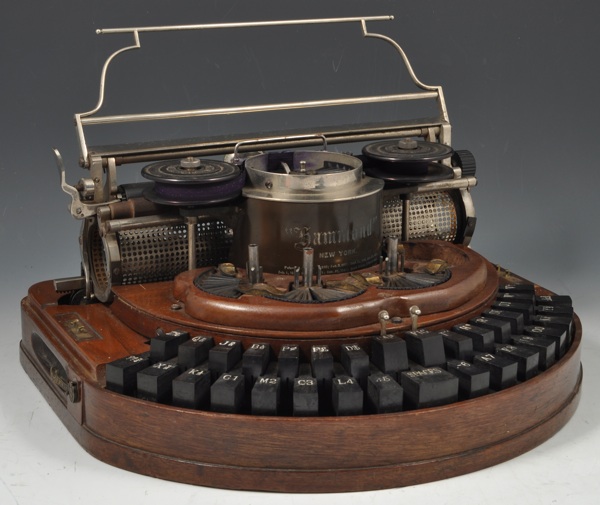 Dodgson's Hammond from another angle.
Dodgson's Hammond is today owned by North Carolina-born Charlie Lovett (1962-), a past president of the Lewis Carroll Society of North America, a noted collector of Carroll ephemera and author of five books on Carroll. His quest for this Carroll "holy grail' began in the early 1980s when he found, in an antiques shop in London, a small handwritten note by Dodgson in which he asked for help in operating his new typewriter. Lovett has done much research into the Hammond and believes Dodgson took the machine with him on his summer travels to Eastbourne. 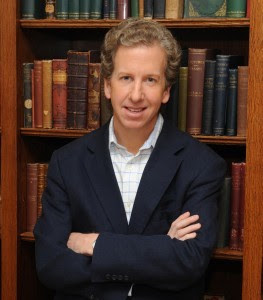 Lovett (above) writes, "Within a week of receiving his machine, Dodgson, ever the inventor, had devised two improvements. The first involved the loading of the paper. Dodgson’s method was slightly more difficult, but much less likely to result in damaged paper (Dodgson himself called it a "very simple dodge"). The second improvement made his typewriter more like a modern word processor, for it produced a justified right margin. He achieved this by counting the number of characters in each line, and adding an appropriate number of spaces between words in order to produce lines of uniform length. Though this process was certainly tedious, Dodgson used it on occasion to produce documents that looked professionally printed. This, along with his references to its function as 'printing', is an indication that he considered his typewriter to be essentially a home printing press, a view that vanished but today again prevails in our expectation of producing professional-quality publications on home computers." (Note by RM: the idea that a typewriter was a "home printer" was shared by the great majority of owners of early typewriters, right across the world, including here in Australia. It should also be noted that Dodgson's laborious system of "justifying" lines has since come to be considered an "invention" [or at least a "modification"] of his, when it clearly was no such thing, but simply a very straightforward manipulation of the typewriter, of which any child was capable. I did it myself as a youngster.) 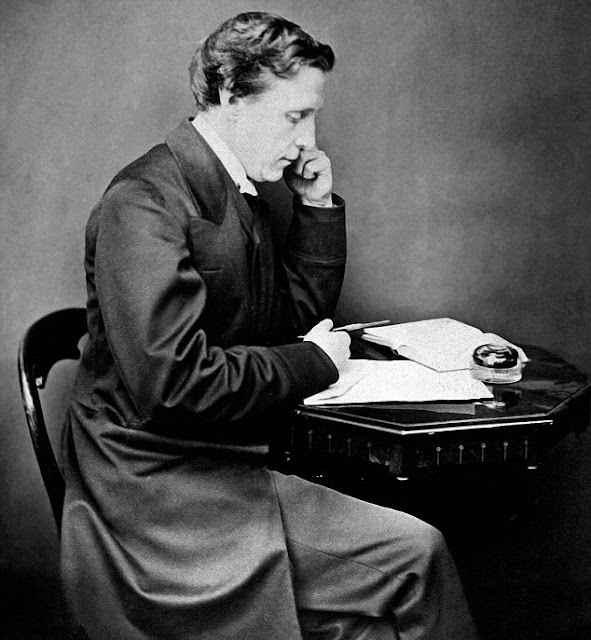 Charles Dodgson, c1890?
"Dodgson used his typewriter for composing correspondence, entertaining his child friends and, in one instance, producing one of his desktop publications. He did not, however, rely heavily on the typewriter. The machine always remained something of a novelty to him and was more frequently used for the entertainment of children than for serious writing. Although Dodgson composed tens of thousands of letters in his lifetime, and several thousand of these are still extant, a careful search has brought to
light only 15 typed letters. 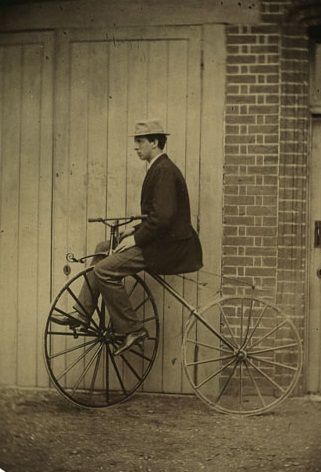 Wilfred Longley Dodgson on Charles' Velociman.
"When Dodgson died in 1898, his Hammond typewriter was not included in the sale of his effects; it was purchased [on February 18, 1898] by his brother Wilfred (referred to in early census returns by his second name, Longley, not Wilfred) from the estate for £6. Wilfred used the machine in association with his career as a land agent and was still using it as late as 1908, when he received a letter from [the] Hammond Typewriter [Company, presumably of London] on 26 March replying to his letter of the 25th in which he requested some new ribbon. The letter reads, in part: 'We are very glad to hear that you find the machine after all these years such a true servant to you that it is still enabled to do the work which you require of it.'" 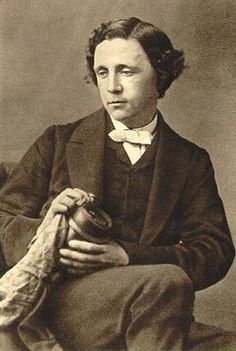 Dodgson looks like he's dreamily polishing the turret from a Hammond,
but he isn't. The photo was taken in 1863.
Charles Lutwidge Dodgson was born in Daresbury, Cheshire, on January 27, 1832, and died at Guildford, Surrey, on January 14, 1898, aged 65. A writer, mathematician, logician, Anglican deacon and photographer, he was a lecturer of mathematics at Christ Church, Oxford and published texts including Memoria Technica, Curiosa Mathematica, Principles of Parliamentary Representation and Symbolic Logic. He worked primarily in the fields of geometry, matrix algebra, mathematical logic and recreational mathematics. Two volumes, Curiosa Mathematica I (1888) and Curiosa Mathematica II (1892), could well have been written on his Hammond.
Posted by Robert Messenger at 14:48

Excellent article! This typewriter has been on display at the New York Library for the Performing Arts at Lincoln Center since October as part of the Alice Live! exhibition, ending January 16.

You might be interested in the expanded version of my article on Dodgson and the Hammond (originally published in Jabberwocky but expanded in the catalogue of my exhibition Lewis Carroll and the Writer's World). If you send me your address (you can contact me through my website www.charlielovett.com) I can send you a copy of the catalogue. It was originally issued with a slip in the back with a line of text types on the typewriter. To include that, I'll have to wait until the machine returns from New York, probably in February or March. I recently bought a letter in which Dodgson mentions the type-writer, so I may have to expand the article yet again!

That typewriter is super. I think it fits Mr. Carroll perfectly. A fine intricate machine and a very inventive owner.

Great story! I saw the typewriter when it was auctioned, but did not know the tales behind it.

Thoroughly engaging essay, thanks so much for the story and the excellent photos. Always a treat to read your well edited articles. ~TH~