QWERTY and the Imaginary Son-in-Law

Furphies about QWERTY and the true origin of the typewriter keyboard arrangement have now come full circle, with the publication of Tony Allan's "book of lifts", Typewriter: The History, The Machines, The Writers.  In it Allan claims: 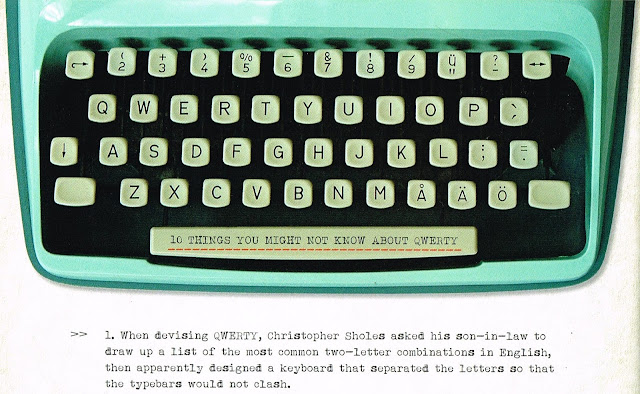 C. Latham Sholes (he always referred to himself thus, never as Christopher Sholes) had only one son-in-law when he and James Densmore settled on the QWERTY arrangement in a makeshift factory on a millrace in Milwaukee, sometime between late summer and early autumn 1872. This son-in-law was an Irish-born clerk called Thomas Tyrell and he had absolutely nothing to do with the development of the typewriter, let alone its keyboard. The ubiquitous "son-in-law" found in so many poorly-researched typewriter histories, the so-called superintendent of schools in Western Pennsylvania, never existed. 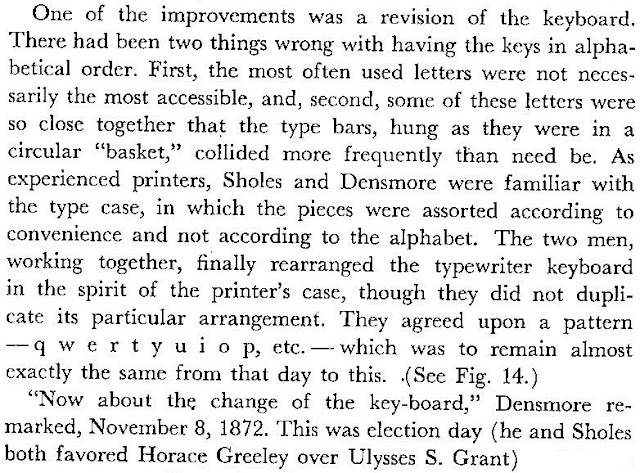 The Typewriter and The Men Who Made It (Richard Nelson Current, 1954)
Sholes's first son-in-law, James Herman Collins, had drowned 12 years earlier, in the early hours of September 8, 1860, aged 20, when the PS Lady Elgin, a wooden-hulled sidewheel steamship, sank in Lake Michigan off Highwood, Illinois, after she was rammed in a gale by the schooner Augusta. Collins left behind a 16-year-old pregnant widow, Latham Sholes's eldest daughter Mary Katherine Collins, who he had married almost four months earlier. Their daughter, Anna Mary (Minnie) Collins, was born in Madison, Wisconsin, in 1861. Mary Collins subsequently remarried, to another 20-year-old, Tyrell, in Fond du Lac in September 1863. Mary died in Chicago in 1896. Latham Sholes's second daughter, Elizabeth (Bessie) Sholes, married New Yorker Hubert Clement Gilmour, also a clerk, in late 1874, more than two years after the QWERTY keyboard had been settled upon. The third daughter, Lillian, lived with this couple - she married Canadian-born Charles Fortier in November 1915, when he was 63 and she 58. Sholes's youngest daughter, Jessie Sholes, died unmarried, aged 36, in Pasadena in March 1898.
The furphy that a son-in-law of one of the promoters of the Sholes & Glidden was involved in the QWERTY arrangement seems to have first surfaced in an unreferenced mention in George Tilghman Richards's 1938 The History and Development of Typewriters. Richards (1883-1960) was a mechanical engineer, not a historian. He wrote:

Where Richards got this strange idea from is not known, but it is most certainly not true. Richard Nelson Current (1912-2012), a true academic and historian, started work on The Typewriter and The Men Who Made It, by far and away the most complete and accurate history of the Sholes & Glidden, in 1947, nine years after Richards's first edition was published. Current's book finally came out in 1954, and set the record firmly straight. He pointed out that Amos Densmore's only input on the keyboard had been to suggest to his brother James that the layout should contain 44 keys, "at least for the de luxe model, or what he called the 'literary machine'." As for a son-in-law, there was none. 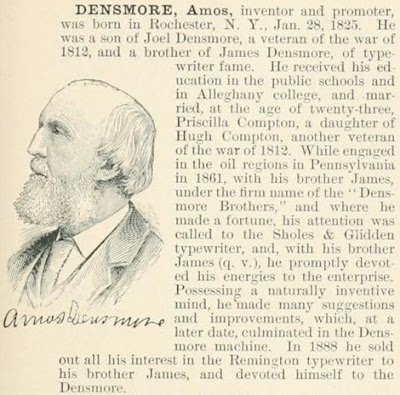 No claim about consulting a son-in-law was made in Amos Densmore's own entry
in the 1893 volume of The National Cyclopaedia of American Biography,
nor in his obituaries when he died in October of that year.
In 2011, Koichi Yasuoka, who has maintained Current's standards in accuracy for his The Truth of Qwerty site, pointed out "Amos Densmore [James Densmore's brother] had no son-in-law in 1872. His oldest [surviving] daughter, Blanche Densmore [1850-1913], married Charles Alphonso Curtis in Meadville, Pennsylvania, on January 7, 1875." [Imogene had died in 1851, aged three.]
In an article called "The Tyranny of Qwerty" in the Saturday Review of Science, Volume 55, No 40 (September 30, 1972), a Chicago writer called Charles Lekberg somehow succeeded in switching the son-in-law furphy from Amos Densmore to James Densmore. Lekberg wrote, "In their innocence Sholes and his partners first arranged the letters of the typewriter's keyboard in alphabetical order, but the uselessness of this system soon became apparent ... You didn't have to type very fast for the letters to rise up and jam at the platen (the roller of a typewriter), the very place where they were supposed to print. To end that annoyance, James Densmore asked his son-in-law, a Pennsylvania school superintendent (who surely should have known), what letters and combinations of letters appeared most often in the English language. Then, in 1872, Densmore and Sholes put what they believed to be the most used characters, as far apart as possible in the type basket and ended up with the horror of QWERTY."
It was Lekberg who should have known better, as he had access to Current's work. This Lekberg claim was picked up by Wikipedia and remains there today - despite reference to Yasuoka's clear evidence to the contrary. Many of us may lightly dismiss Wikipedia's reliability, but the site demands that contributors carefully check and cross-reference material - which is all very well, unless the source is wrong! 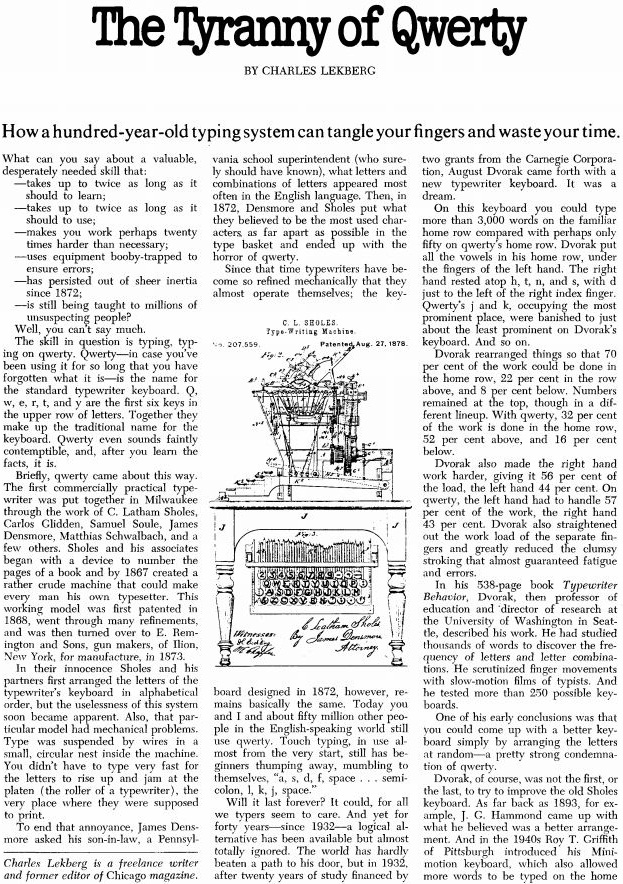 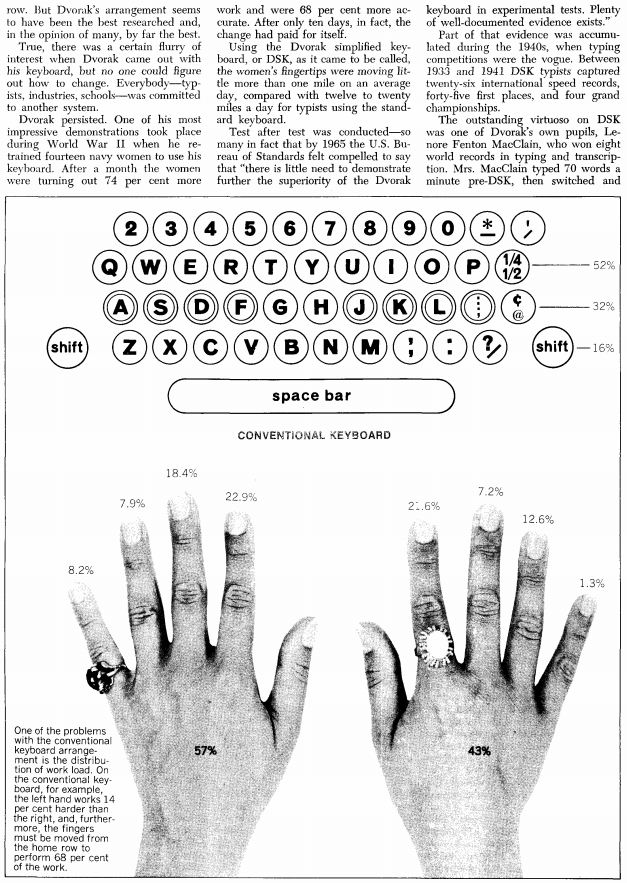 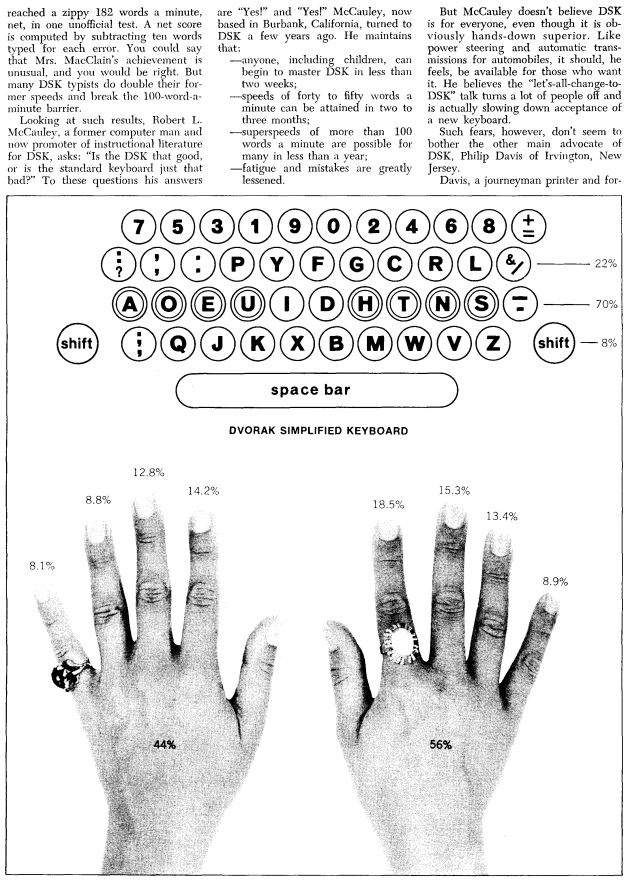 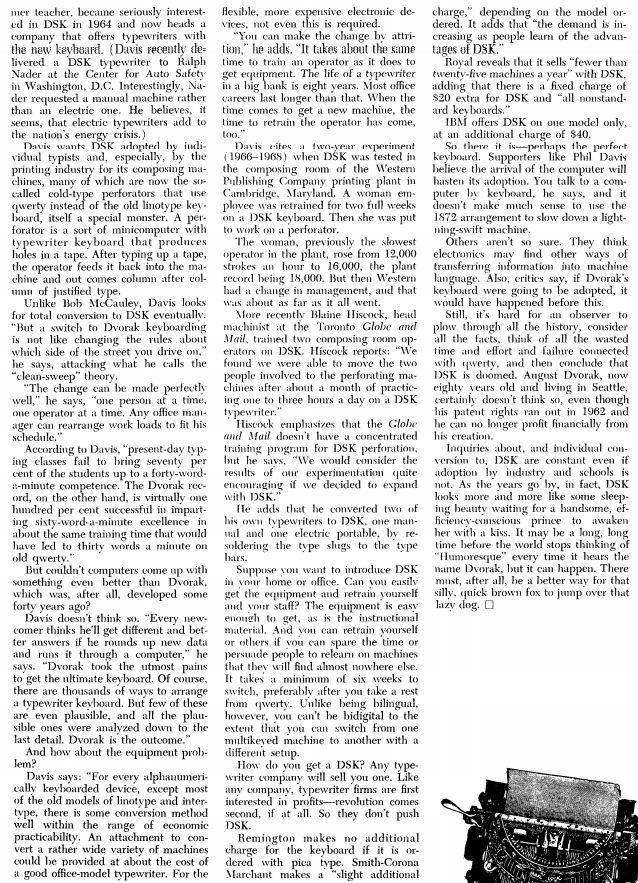 Wikipedia persists regardless of Yasuoka yet again coming to the rescue, in 2006 pointing out, "James Densmore had no son-in-law at that time either. His only daughter, Tina Densmore [1850-1925], married Edward Joseph Delehanty in Greenville, Pennsylvania, on July 23, 1874."
Lekberg's blunder was duplicated in Darren Wershler-Henry's 2005 The Iron Whim: A Fragmented History of Typewriting.  Except in Wershler-Henry's case, he credited the claim to Richards, when Richards had clearly written Amos Densmore, not James Densmore - Wershler-Henry couldn't even get the attribution right! “To this end, Sholes’s partner James Densmore asked his son-in-law … to prepare a list of the most common two-letter sequences in the English language.” 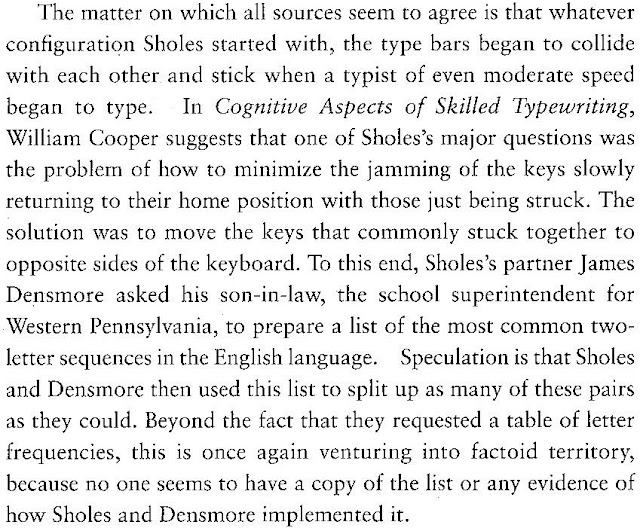 In 2011, Frank Romano, an emeritus professor at the Rochester Institute of Technology, got in on the act but cut out the son-in-law, calling Amos Densmore an "educator". He was no such thing, he was an oilman. Two years earlier, the University of Mary Washington (which also had access to Current's book) cited Werschler-Henry, giving James Densmore a son-in-law he didn't have at the time. Many more sites have repeated this silly mistake. But now the imaginary son-in-law has been transferred from the Densmore family to the Sholes family by Tony Allan. When will people who imagine they are qualified to write books about typewriter history actually do the hard yards and check some facts for themselves?
Posted by Robert Messenger at 13:35

A FURPHY keyboard, now there's a thought! A seriously good blog post, thanks for the information. :)

In reality all the most used keys should be those we press with our pinky fingers! Just kidding.
In the PC world I wish they'd adopted Dvorak keyboards because computers no longer have the mechanical issues. So what if I had to learn both? I did anyway, but Dvorak keyboards are very rare so I probably forgot the keys.

Back a decade ago when I used a Palm-based PDA, I got used to the FITALY keyboard, an alternative keyboard designed for single-stylus entry. They had a game called Fitaly Letrus that worked like the game Tetrus to help train the user to the use of the new keyboard layout. The game would also give you a reading of your typing speed; I got to over 35 WPM using Fitaly with a stylus on a touch-screen PDA, and was rather good at it, faster than using Palm OS graffiti. I wish Fitaly were available for smart phones today, it's much more efficient than either QWERTY or Dvorak for small screened phones.

Thanks for the article.

Thank you for going against this rubbish rumor about jamming handles. I can't hear it anymore.

What I find most interesting about the 2009/2010 research paper by Yasuoka and Yasuoka, "On the Prehistory of QWERTY" was the alternative explanation of why certain letters are positioned where they are now. They write:
" At least, in our opinion, T, the most frequently-used consonant,
should have moved to the center of keyboard, W, the other semivowel, to the
upper row, Q, less frequently-used letter, to the edge, and I, also used for the
numeral 1, near by 8 to type “1870” or “1871” rapidly. S should have moved in
between Z and E because of the ambiguity of American Morse Code (Fig. 3).
The code represents Z as “· · · ·” which is often confused with the digram
SE, more frequently-used than Z ... "

In particular the "optimization" for Morse receivers is very interesting.

Brilliant! Thanks for an excellent article clearing up something I have heard a lot of conflicting information about.

Robert, apart from the son-in-law myth, I wonder whether you have an opinion on the theory that the S&G keyboard is designed to separate pairs of typebars that frequently follow each other. In ETCetera #6, Richard Dickerson published an analysis that supports this theory, with the notable exception that the R and E typebars are only two positions apart. Dickerson calls this a mistake. The Yasuokas take it as evidence that the whole theory is wrong (http://repository.kulib.kyoto-u.ac.jp/dspace/bitstream/2433/139379/1/42_161.pdf), but I am not convinced by their argument about Morse code—partly because, I admit, I just haven't had the patience to follow its intricacies.