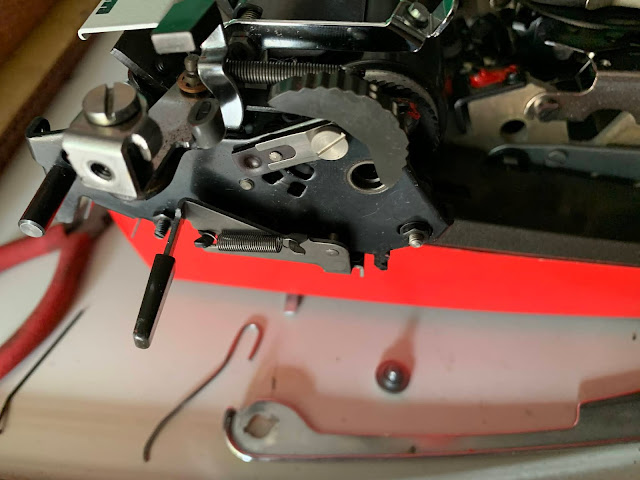 Adler Gabriele 25 with broken carriage lever mechanism.
Regular readers will be aware I supplied 10 portable typewriters to the Museum of Australian Democracy’s “Yours Faithfully” exhibition at Old Parliament House in Canberra earlier this year. Knowing they’d be used by the general public, and in particular by very young people, I was expecting to be called in on a regular basis for damage control purposes. That proved to be the case, but for most part the servicing and repairwork I did was of a fairly minor nature. Still, I had to keep reminding myself that these were no longer my typewriters, they belonged to MoAD, so supervising their correct use was out of my  hands. I regretted selling the Olivetti Lettera 32, the Hermes Baby and the Facit TP1, but, then, such is life, as Ned Kelly once said on the gallows.

Lately, abuse of the typewriters has considerably worsened, and I’m wondering if our famous Bushranger hasn’t sprung from his grave with the aim of using typewriter parts for his protective armour this time around (last time it was plough mouldboards). My concern now is that with the attrition rate the way it is, MoAD will soon have no typewriters at all to provide the public to use. 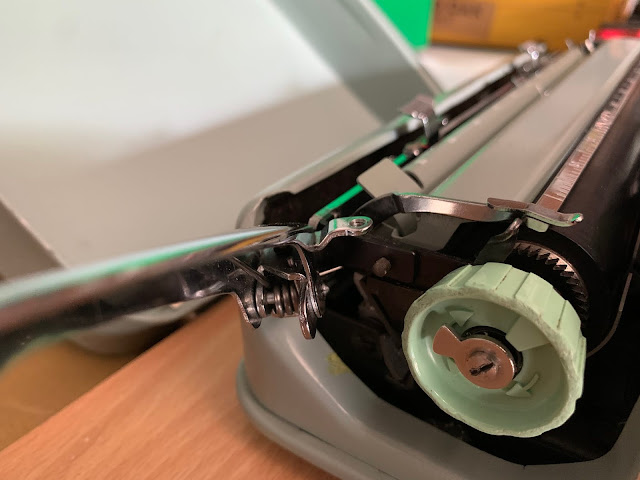 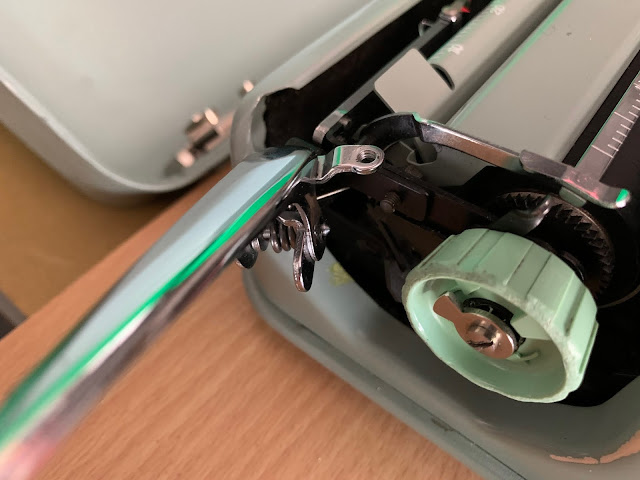 The most worrying part of all this is that the last three typewriters I had to bring back to my workshop for repairs all had the same problem – someone has smashed the carriage lever mechanism. The Hermes Baby is possibly beyond repair, as it seems to me that part of the mechanism is missing. I don’t have a Baby here to compare it with, so I’ve included two photos in case any readers can tell me exactly what is missing. 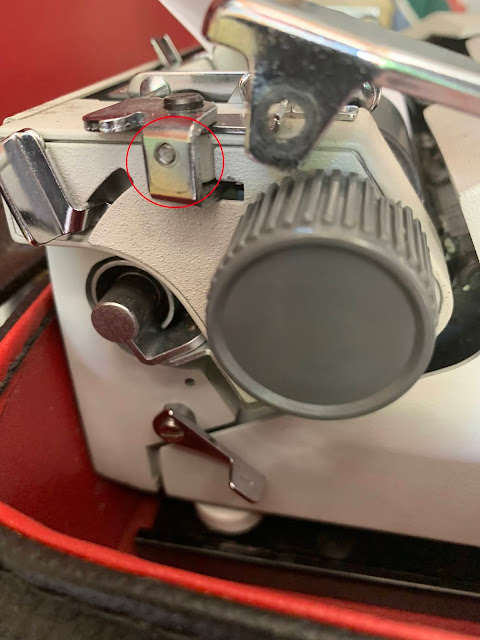 The bottom end of the screw still attached (circled), lever in the foreground, top right.
A note on the Facit said "Broken", with an emoji. "Broken" is an extreme euphemism for what has happened to it. Like the other two, it has been very forcefully disabled. A short, stubby screw holding the lever to the Facit has been snapped in half, which would have taken some doing - an absolutely enormous amount of force, almost superhuman. When I got the head of the screw out of the lever, it fell in two pieces, which will give you some idea of how much force was used. This is, after all, solid metal. If I can get the bottom half of the screw out of the machine itself, I might be able to reattach the lever with a new screw. If …

I raised these points with one of the curators and I must confess her thoughtful reply made me pause for thought about all this. She wrote, “I can say with confidence that this space is one of our most popular exhibitions and that is due to the typewriters. The typewriters help facilitate engagement between visitors in a way that objects behind a glass case cannot. This space is special because visitors are given permission to sit and spend time with one another, or with their thoughts that come flowing from the keys as they type. The anonymity that the typewriters allow is important for some visitors. For example, in the exhibition’s letterbox, we receive unaddressed messages from visitors that are deeply, deeply personal. Some have brought tears to my eyes. People just needed to share their thoughts or story with a stranger. The typewriters make this possible. The typewriters help give visitors a voice that they may not have realised they possessed … For every visitor behaving badly there are multiple others who do value the typewriters and use them to connect with themselves and others.”

Posted by Robert Messenger at 22:08

I'm not sure of 2 issues: how long it takes to post something to Australia, and if I have your Hermes part. I'll check. I've got a parts Rocket/Baby in the shop some place.

It is saddening to see typewriters abused, but the museum situation is unique as I doubt proper use instruction can be given every visitor, and a curator hovering over each typist would detract from the freedom offered by the display.

I wonder if a type bar electric with powered carriage return might fare better. But alas, never under estimate the gremlins!

This is a nice service you're providing, Robert; I wish the public appreciated it more.

Thank you Bill and Joe, these are all very good points. I'll take all of them on board.
I've just been out in the typewriter workshop for several hours and I think I've fixed all three. Bill, that's very kind of you to think about the Baby parts. I took it apart today and found the missing piece had dropped down into the mechanics. I should have realised it was the line-spacing bar, but I was so upset about the damage to it I was in no mood to be calm and clear-headed. Anyway, the Baby is a complete fix. The Facit is also going again, except they won't be able to drop the lever to get it into its case, it's permanently up! I had a Dickens of a job to find the right-size screw. Fingers crossed the Adler will be OK, too. I'll give it a test type in the morning.

If you drill out the remains of the screw in the Facit, with a rubber washer, a Royal Custom III's carriage return lever will work in a pinch.

Good you found the piece. I did not think of it falling into the machine either.
In any case, I'll hold on to my old parts machine. One never knows when a part may be needed.

Congrats on getting the machines back into operation.

I wish I had the knowledge to provide helpful advice. I find it heartening that some people are finding a voice with these wonderful machines and very disheartening that others are silencing that voice with mindless destruction. Thank you for working to keep these typewriters alive.