Hunger Games: Have Typewriter, Will Fast (For a Very Long Time) 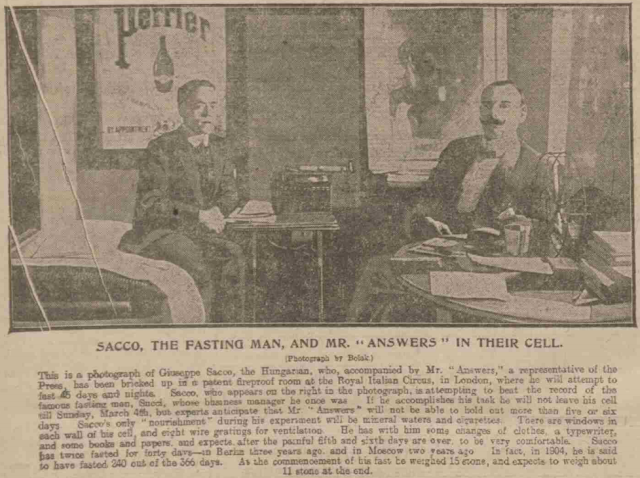 Karl Homan with his typewriter and the Daily Mail reporter Shillaker, nicknamed “Mr Answers”.
Between 1886 and 1932, ultra-marathon competitive fasting was a “thing”. There were a great many spectator events, usually single-person fasting challenges lasting from five to nine weeks and held before large curious crowds in prominent city venues in Europe, the United States and Australia. In exchange for some monetary gain, fasting competitors lost a lot weight, dignity and in some cases their health. Viennese police banned fasting in 1925 after Wilhelm Fuhrmann went mad on the 16th day of a fast. Following a 65-day fast in Blackpool in 1929, a Dutch world record holder, Richard Hans Jone - known as “Ricardo Sacco” - died. A post-mortem found he had suffered from cardiac failure, ascites (abnormal buildup of fluid in the abdomen), dropsy (swelling of soft tissues through the accumulation of excess water) and an enlarged liver. Fasters drank gallons of mineral water during each event, and smoked as many as 40 cigarettes a day. 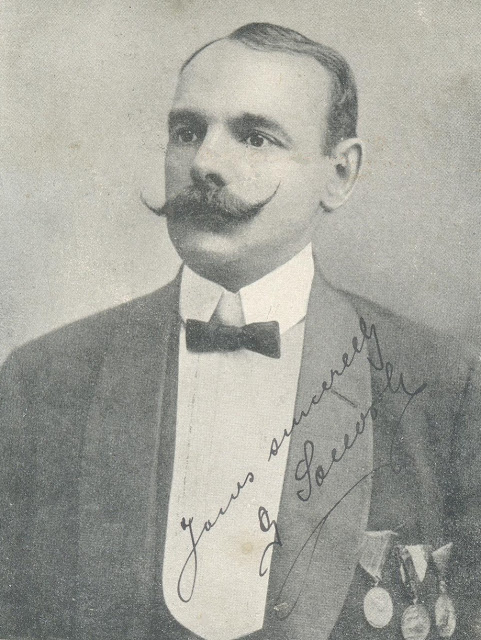 They all used different methods to beat the hunger pains and boredom. At least one never went into a fasting event without his typewriter. This was “Sacco”, at one time Jone’s great rival. “Sacco” was really Karl Homan, the first of the two to adopt the stage name. Homan was born in 1866, supposedly in what, the following year, became the Austro-Hungarian Empire. He was, however, almost certainly German. His earliest fasting efforts were in eastern Germany and he claimed to have a young family living in Cologne, though his wife Josephine later joined him in London. Both were German speakers, Josephine often requiring an interpreter. Homan was mostly referred to as Hungarian, but also as Austrian, and only once, after a long fast, as “a piece of hunger”. His stage name was Giuseppe (sometimes Guiseppe) Sacco (occasionally Zakko) Homan (also Homann). 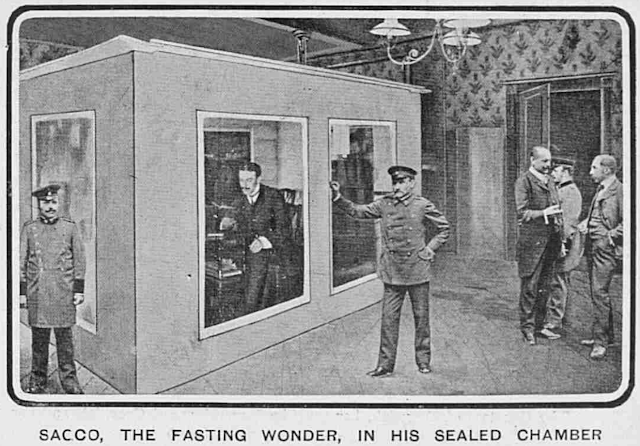 Homan’s true history is densely clouded by the many contradictory stories he told about his early life. In Australia he claimed to have served four years as a sergeant in the Austro-Hungarian army, and later to have worked in a cigarette factory in the US. He started his fasting career in 1891 in Plauen near the Czech border in Saxony and further north in Gera in Thuringia. 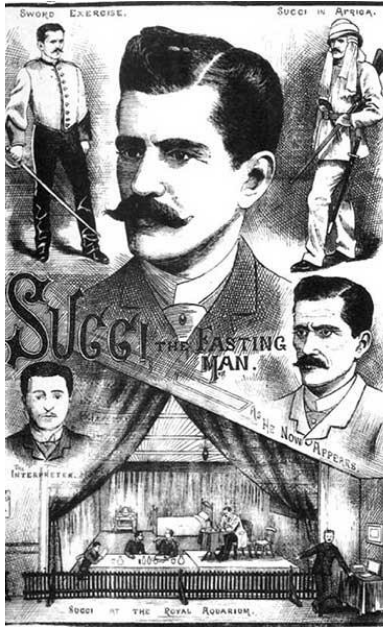 “Sacco” adapted his performance name from the first famous faster, Italian Giovanni Succi, 13 years Homan’s senior, who in 1890 fasted for 39 days at the Royal Aquarium in Westminster, London. Succi lost 34lb, or 26.5 per cent of his starting body weight, but won a substantial prize of £3000. In December 1896 Succi went stark raving mad during a fast in Paris. His stage career didn’t end there, but he never fully recovered. He went into fancy chicken farming and died in Rome aged 68 in 1918. 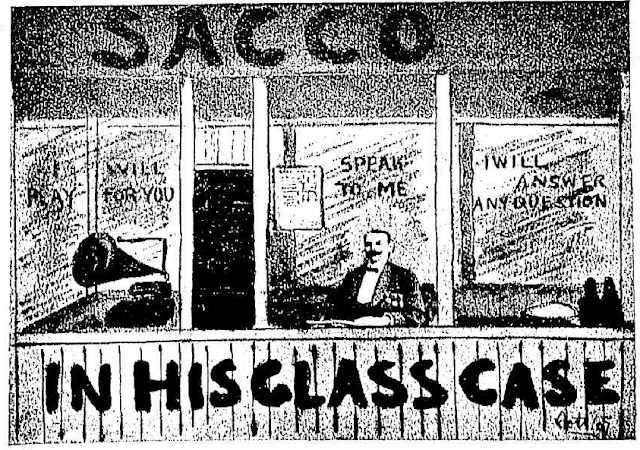 “Sacco” said he was Succi’s secretary and business manager when, in early 1906, he gained enormous worldwide publicity for his record 45-day fast in the promenade buffet in Hengler’s annexe of the Royal Italian Circus, in what is now The Palladium in London. Before whiling away his time in a small, 7ft x 12ft x 7ft clay brick fireproof cell with “vitiated air”, drinking 50 quart and 25 pint bottles of Perrier mineral water, smoking 1125 Mal-Kah Egyptian cigarettes, playing chess and typing his memoirs, the 6ft tall, 198lb Sacco had fortified himself with a “liberal consumption” of Dr Adolf Hommel’s Haematogen, a “foul potion” alleged to be a blood-forming tonic, costing two shillings and ninepence a bottle. A Daily Mail reporter called Shillaker, nicknamed “Mr Answers” for the occasion, started out with “Sacco”, but lasted only a few days. The chamber had windows on each wall, and eight 18in-square wire gratings for ventilation, but there was no mention of such delicate subjects as the disposal of excreta. Still, “Sacco” managed to “hold on” from January 18 to March 3, yet emerged looking remarkably fit, though 55lb lighter, his dress suit hanging from him like a bag, his arms described as being “like the drumsticks of an Italian turkey”. Admirers didn’t do much for that look by giving him such weighty objects as a gold snuffbox and watch, a diamond monkey pendant and £25 cash. His total winnings were £1500. The entry fee to watch his last day had gone up from fivepence to five shillings a head. 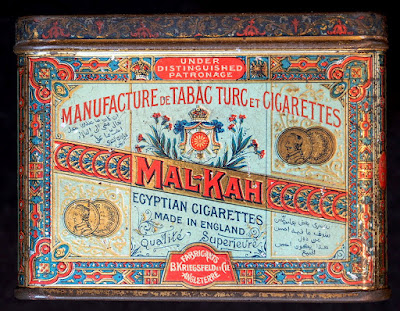 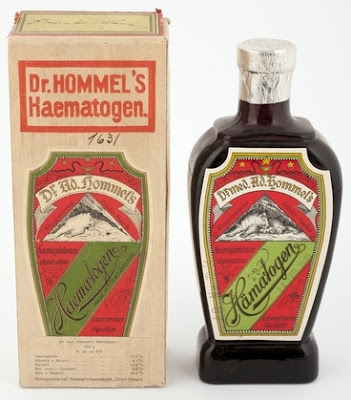 On February 9, 1907, Homan completed a fast at Olympia in London of 46 days and four hours to extend his world record, but there were later allegations that two days had been fraudulently added. At the Operetta House in Edinburgh on July 28, 1908, Homan reached 50 days, after 2785 cigarettes, 450 bottles of mineral water and a 53½lb weight loss. And on December 2, 1908, at the King’s Hall in Birmingham, he set another world record, of 52 days, at a loss of 55lb. Advertising agent Charles Bernard took him to court over a £49 debt, but told the judge he couldn’t serve papers on Homan because “Sacco” was “always in a glass case”. 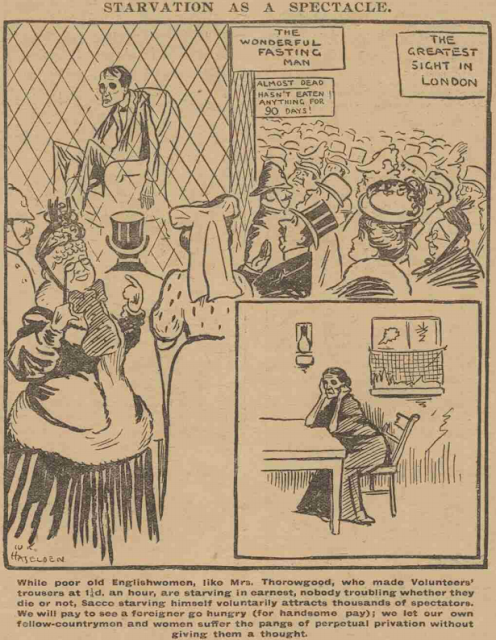 Homan’s earnings had became increasing meagre, from £187 for an appearance to £104 and £83. Newspapers in various countries joked that without a greater return for his efforts, “he’ll starve to death”. One good reason for the decline in his revenue was that British newspapers began to tire of the fasting events and had curtailed the publicity surrounding them – meaning Homan had to pay for advertising, and to employ young women to collect gate takings. In both Britain and Australia, Homan’s performances often came to be at best ridiculed and at worst held up as extremely bad examples to the general public. Medical experts tried to ban the fasting mania. 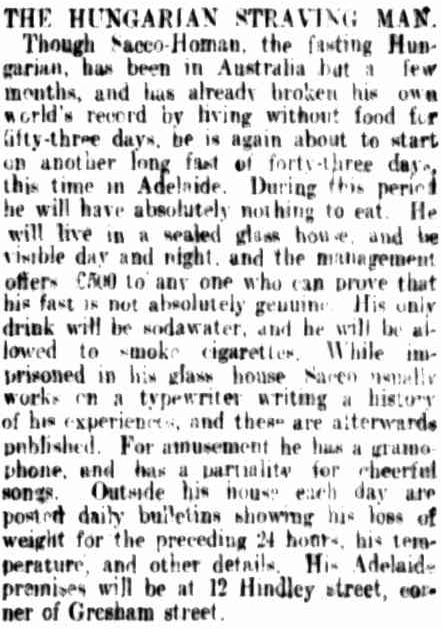 In 1909-10 Homan travelled around Australia, taking his typewriter with him. He arrived in Melbourne on the Persic on October 8, 1909, and exactly a week later started his major fast here, of 53 days until December 7 at the Waxworks between the Melbourne Coffee Palace and Parer’s Crystal Café on Bourke Street. (The mineral water was now Koomah Spa. But the preferred cigarettes remained Mal-Kah. His weight loss was from 214lb to 157lb.) 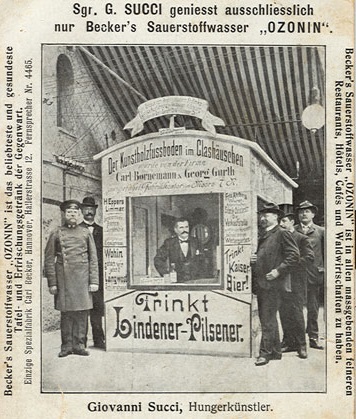 A little more than three weeks later Homan started another fast, at the Coliseum on Pitt Street, Sydney, and continued on fasting across the country, from Brisbane to Hindley Street, Adelaide, where his act was succeeded by Casey, the African chimpanzee. Back in Melbourne in August, Homan was challenged by an English-born prestidigitateur called “Rexo” (1874-1918, real name Charles Griffin). In New Zealand, where he started his career, “Rexo” was called the “American  Cinqueralli”, after the great German music hall. “Rexo”, at 134lb, had a lot less to lose (in weight at least). He lasted almost five weeks in the “great hungry championship”, then gave in. Homan returned to London on the Medic in October 1910. 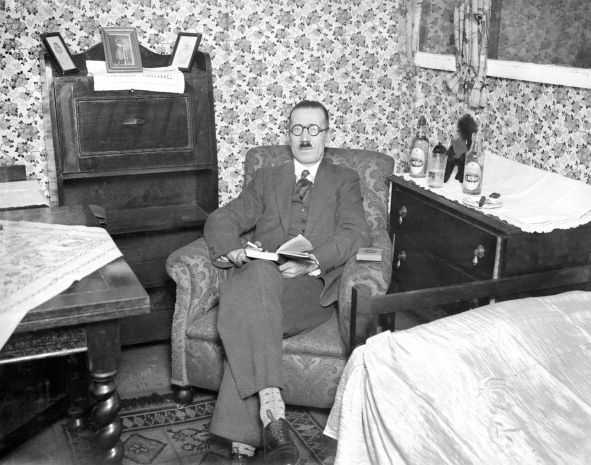 (New Zealand did eventually produce a world fasting record holder, of sorts. William Edmund Ormerod, above, was actually born in London, in 1891, but did spend many years in New Zealand, where he was, as they say, “known to police”. This rather shady character fasted under the stage name of “Raymond Tac” – he was the one rival to attend Ricardo Sacco’s funeral in 1929, and in 1931 set a world fasting record of 68 days at Clacton Pier in Essex, England. He died in Manchester in 1969.) 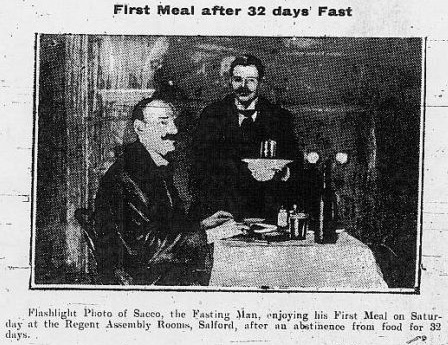 Karl “Sacco” Homan continued to compete in Britain until the early months of 1915. He had set a new world record of 60 days at Crystal Palace in London in 1913 and shortly after set out to extend that to 62 days at the Tournament Hall in Liverpool. But on January 1, 1914, he quit after 39 days, his first incomplete fast in 23 years. The end was nigh for Homan. On April 9, 1914, another attempt at the Giant Wright’s Novelty Place in Sunderland ended one hour short of 40 days. Homan went into a frenzy, smashed the glass windows of his cage and severely cut his right hand in the process. As attendants struggled to calm the delirious Homan, “Sacco” received an added blow. George Toner, a local locked in an adjoining cage, popped out of his cell to claim a bet, since he’d lasted longer than “Sacco”.

On August 14, 1914, two days after Britain and France had declared war on Austria-Hungary, Homan registered as an Austrian citizen with police in Huddersfield, Now confined under the Aliens Restriction Order in Council, his movements were curtailed and his performance days were almost over. When Homan finally disappeared from the limelight he’d enjoyed for nine years, he was perhaps a slimmer and wiser man.

Posted by Robert Messenger at 21:14

Fascinating and bizarre. Do you know Kafka’s story “The Hunger Artist”? A must read.

Talk about extreme. Fasting is supposed to be healthy, but not at days or weeks on end.