Que? ‘The Mystery of Henri Pick’ The Best Typewriter Movie Yet! 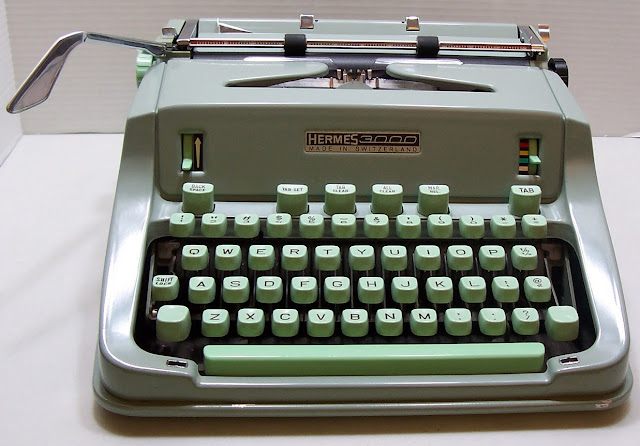 Bill MacLane's Hermes 3000 is the same model as the one used in Le Mystère Henri Pick.

We saw the 2019 French comedy-drama Le Mystère Henri Pick on Sunday and afterwards couldn’t stop talking about what a good movie it is. Perhaps because of the key part played by a Hermes 3000 semi-portable typewriter, I thought it more dramatic than comedic. After all, it’s a ‘whodunit’ of a very different kind, without the blood and the gore. The only deaths I recall are those of pizza chef Pick himself (and that has occurred two years before the action in the movie begins) and the similarly posthumous Jean-Pierre Gourvec, founder of the Library of Rejected Books in the village of Crozon in Finistère in western Brittany (what a fabulous concept, based on a Richard Brautigan idea). 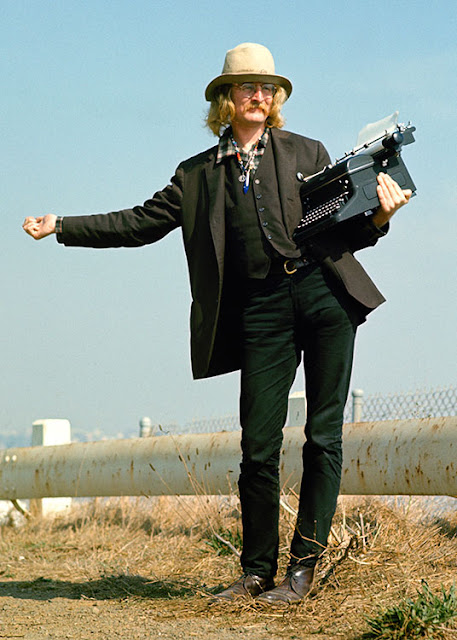 Richard Brautigan and Royal.
Given my leaning toward the typewriter-related histrionics, Fabrice Luchini played the lead role of literary critic Jean-Michel Rouche with a little too much levity for my liking, more impish than intentful. I notice some critics consider Luchini was perfectly cast, but I would have preferred someone with the flair of David Suchet playing Hercule Poirot. And The Hollywood News did describe The Mystery of Henri Pick as a “delectable Agatha Christie caper”. ScreenDaily added the character Rouche was a “pompous windbag”. Still, I didn’t let my impression spoil an otherwise excellent afternoon’s entertainment. 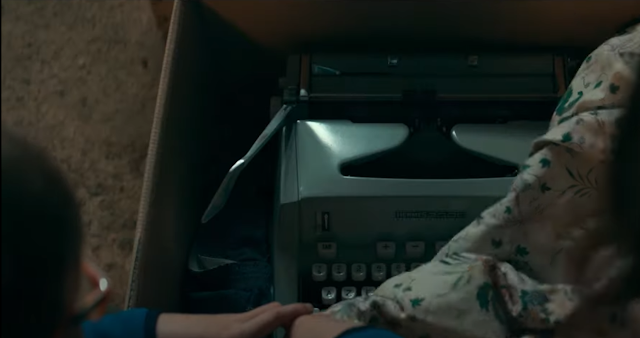 The scene in which the late Henry Pick's daughter Joséphine and her son
Melville find the Hermes 3000 in Henri's basement.

I’d rate The Mystery of Henri Pick as probably the best typewriter movie I’ve ever seen, for reasons I’d not normally expect to be applying to a movie with a typewriter (or many typewriters) in it. For one thing, I’ve no doubt whatsoever that the Hermes 3000 in Henry Pick is absolutely pivotal to the story - even more so than, say, the Groma Kolibri in the 2006 German film The Lives of Others. It’s not a movie full of typewriters, and one doesn’t see the Hermes 3000 all that often. Indeed, it’s only seen in use twice, and then fleetingly, before becoming the centrepiece in a shrine. Unlike The Lives of Others, the typewriter doesn’t get its rightful place in the movie posters, the trailers or the reviews. Yet from the moment young Parisienne publisher Daphné Despero (played by the gorgeous Alice Isaaz) wanders into the Library of Rejected Books and opens the unpublished typescript of The Last Hours of a Love Story by Henri Pick, one just knows a typewriter is going to be central to the plot. And it is, with spades. Not long afterwards, Pick’s bookworm daughter Joséphine (played charmingly by Camille Cottin) and her son Melville (named, no doubt after Herman) find the Hermes 3000 in a cardboard box in the late Henri’s cellar. The moment the pair make their discovery, a typewriter carriage bell makes a highly symbolic ding. Then comes the real clanger, when on his live book review TV show, Rouche casts doubt on whether Pick is the real author of the best-selling The Last Hours of a Love Story. Odd as it may initially seem, Joséphine Pick and Rouche become allies in the quest for the truth, despite the firm conviction of Joséphine’s mother Maedeline (Josiane Stoléru) that her late husband did write the novel, for her.

Typewriter purists - and those who use typewriters to write manuscripts - will be wondering from this point onwards why a forensic document examiner isn’t called in. I was certainly thinking along those lines. But finally, in the denouement, all becomes quite clear. Even after Rouche tracks down the Hermes 3000, his amateurish typeslug forensics can only take him so far; there’s much more to the mystery than the diagonal lower leg of the letter “K” being chipped off. I love a movie with lots of typewriters being used as much as the next Typospherian, but I also love a genuine, gripping mystery story. And the unravelling of the reality about the writing of The Last Hours of a Love Story kept us spellbound right to the end. 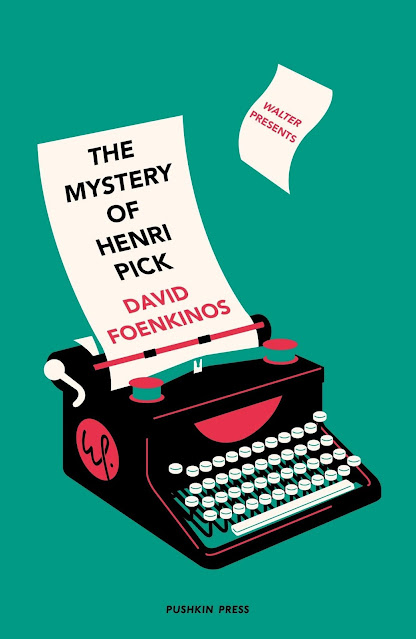 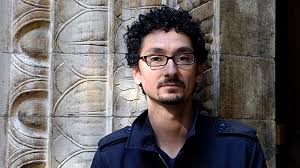 The movie is based on a 2016 novel by David Foenkinos (above, 1974-). I have no idea whether Foenkinos uses, or has used a typewriter in his 19-year writing career, but my guess - based on the evidence of The Mystery of Henri Pick – is that he has a deep appreciation of these wonderful machines. He has singled out the Hermes 3000, though in the movie it’s not the more common version which Larry McMurtry thanked when receiving his Golden Globe for his adaptation, with Diana Ossana, of the screenplay for 2005’s Brokeback Mountain. McMurtry said at the time that the Hermes 3000 was “surely one of the noblest instruments of European genius”. Foenkinos’s Henri Pick story will only further enhance that well-earned reputation, and not just in Europe. The Mystery of Henri Pick is a book that should be read, and the movie watched, by all those who love typewriters, wherever they may be. Typewriters and who used them, and for what purpose, was the theme of The Lives of Others, but this is a very different kettle of fish, a movie about a typewritten manuscript and the ability of a Breton village pizza chef to typewrite a brilliant novel. As Rouche asks on his TV show, before being sacked for asking, if Pick didn’t write The Last Hours of a Love Story, who did? And if Pick did write it, how?

Posted by Robert Messenger at 16:41

I've got to search for the movie and book.
Thanks for featuring my H3k.