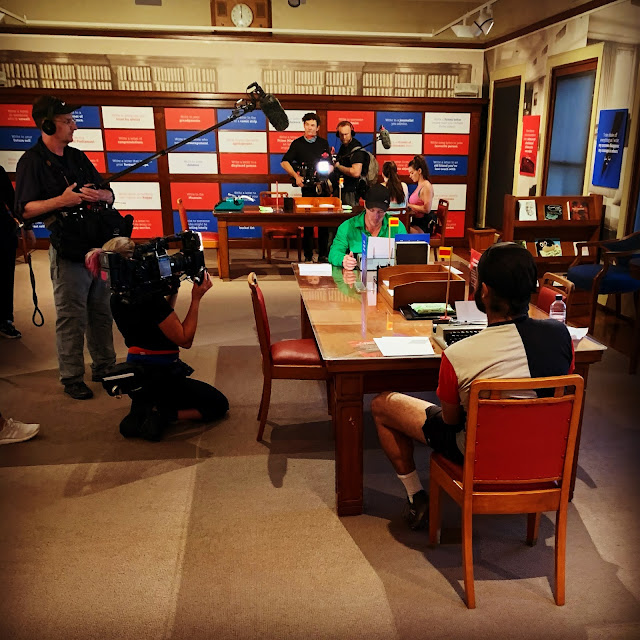 I’ve been using typewriters in various parts of the world for 63 years now, and have had many, many weird and wonderful experiences with typewriters in that time. But nothing, absolutely nothing, has come close to Saturday’s The Amazing Race Australia typewriter test in the Museum of Australian Democracy (Old Parliament House) in Canberra. In the end, with typewriters happily undamaged in this exercise, I was delighted to have been able to get out of hospital and to be there to keep the machines working, if not always smoothly. 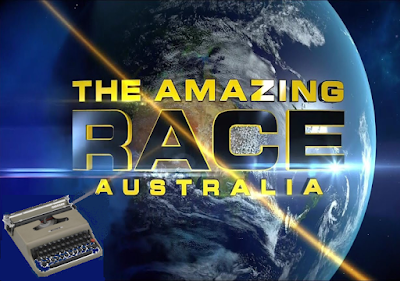 This test was part of the fifth season in The Amazing Race Australia series. It’s a Channel 10 production, and all of the film crew were very professional. They only started filming this coronavirus-racked season at the end of October (in Covid-19-free Queensland), so I guess they have a way to go yet. It will start being screened early next year. 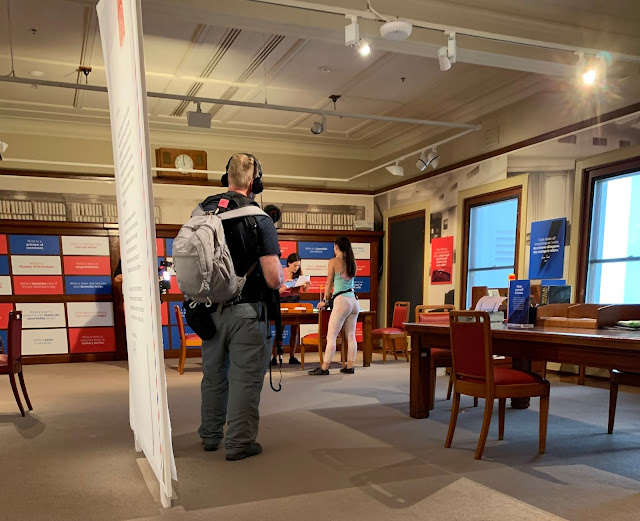 During the filming, I was "in shot" far more often than expected. Since the contestants are chasing a prize of a quarter of a million dollars, I was told to help as little as possible with typing problems - that for that sort of money the two-person teams had to fend almost entirely for themselves. But as it turned out the production people signaled me to go in and help quite a bit, with things as basic as winding paper on to the platen! 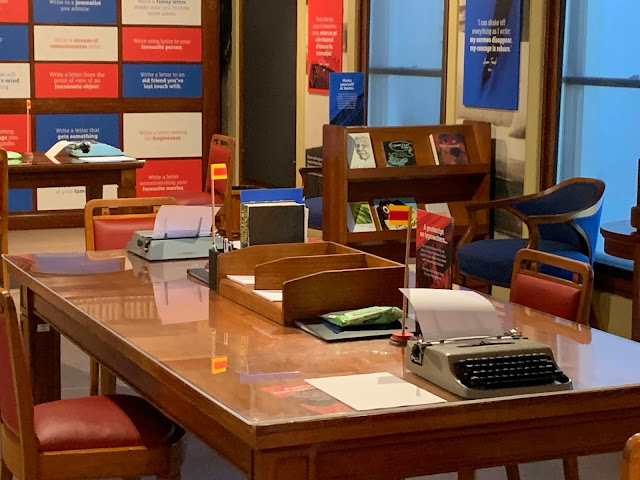 This segment involved three teams, two young woman (one of whom started to pull her shorts down at her typewriter, much to my astonishment! But it was a hot morning), two typically Aussie blokes in green shirts, and two young men of Middle Eastern appearance in bandanas. The six seemed to be within the 25-35 age bracket, but none appeared to have had much prior typewriter using experience. So it was, at least for me, a very interesting day’s work!

One member of each team had to stand in the House of Representatives gallery and memorise as much (in short takes) of the famous “Kerr’s Cur” speech made by former Australian Labor Party Prime Minister Gough Whitlam.* The test marked the 45th anniversary of one of the most despised events in Australian political history, the November 11, 1975, sacking of Whitlam by the then pickled Queen’s representative, Governor-General Sir John Kerr, who proclaimed conservative party leader Malcolm Fraser the replacement Prime Minister (November 11 is Remembrance Day in Australia, the anniversary of the signing of the armistice which ended World War I). The speech was: “Well may we say ‘God Save the Queen’, because nothing will save the Governor-General. The proclamation which you have just heard read by the Governor-General’s official secretary was countersigned ‘Malcom Fraser’, who will undoubtedly go down in Australian history from Remembrance Day 1975 as ‘Kerr’s cur’. They won’t silence the outskirts of Parliament House, even if the inside has been silenced for the next few weeks.” *A cur is an aggressive or unkempt dog, especially a mongrel. In the derogatory human sense, it is a contemptible man.

The contestant hearing the speech then had to run into the typewriter room and dictate, from memory, snatches of the text. No notes could be written down, so this took several return journeys. The memorised grabs were typed by his or her teammate, and the whole speech had to be word perfect before the teams were allowed to leave the typewriting room and proceed to the front steps of Old Parliament House, where one member delivered the lines (this is where Whitlam made his speech in 1975, see image above). Only then did the typewriting test end and the teams could start thinking about their next challenge. The whole thing took almost two hours. 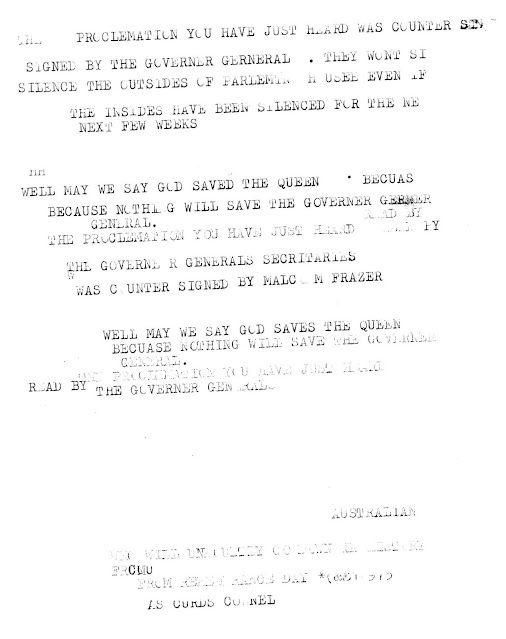 It was just as well I took along with me two “back-up” portable typewriters, an very early Olivetti Lettera 22 (1950) and a much later (1962) Lettera 22, both of which finished up being used. I’d recommended to staff at Old Parliament that they use their Olivetti Lettera 32, Facit TP1 and Hermes Baby for the test. But when I got there on Saturday morning, I found that all three, plus an Adler Gabriele 25, were unusable, the Facit, Hermes and Adler all with smashed carriage levers (see later post on that subject). That left a Silver-Seiko Imperial 200, which was also used, a Silver-Seiko 100, two Olympias (including a hybrid, also a later post), a Remington Envoy II and an Olivetti Studio 45, none of which I wanted to risk, given the rigorous use I was envisaging.

My anticipation of rough handling by The Amazing Race Australia contestants proved well-founded. The young lady typist insisted on forcing the carriage on the Imperial 200 without using the carriage release lever, and the loud grating sound as the carriage was shoved over the escapement rack elicited from me a very audible groan. So much so the whole room of cameramen, sound technicians and producers turned to look at me, then the producers signaled me to go in and advise use of said carriage release lever. Two teams didn’t know how to feed fresh paper on to platen, one didn’t seem to know about using the carriage lever to go to a new line, and two teams accidentally applied the carriage lock, crying out, “It’s not working!” “It” was working, of course, perfectly, they’d just been very clumsy. But of course I hadn’t been allowed to advise any of the typists about these little things that all experienced typists take for granted. None of the typists seemed to know about shift lock (I think they thought it was a “start” button), ribbon colour selection or about applying the right amount of finger pressure to the keytops. But at the end of the day it was all done and a very loud sigh of relief echoed through the typewriting room. No permanent damage was done to any of the machines, thank the typewriter gods! (Who, I must confess, remained reasonably calm and patient.)

Sounds like a fun time. It's be neat to see the program.

Sounds very dramatic indeed! I can't believe that, if $250,000 was a stake and they knew they would have to use typewriters, they didn't do any practicing beforehand.

Well, I suppose they must not have known in advance.

so, typewriting is a vital skill to have when a quarter mil is on the line! Glad to know I'm ready. :D

Also, good to hear your machines survived. Should'a gave them all Underwood 5's (:

Oh wow, illuminating read- my grandmother Thi Hy Dang who was a famous chef/food sculpture artist in Vietnam (basically Vietnam’s answer to Maggie Beer) took a typewriter course in her homeland and had the certificate to show for it. Nowadays, her typewriting days are long behind her but it’s safe to say that her use of PC technology was rather less competent!

But I remember my heady young days playing around with her typewriter, more of a ‘fun game’ perhaps.

Also- that’s unfortunate that this typewriting challenge ended up being cut out of the finale! Not that it matters now considering who won at the final pit stop, but I’m curious who won that challenge at least? 😊