Me and the IRA 'A-Lister' 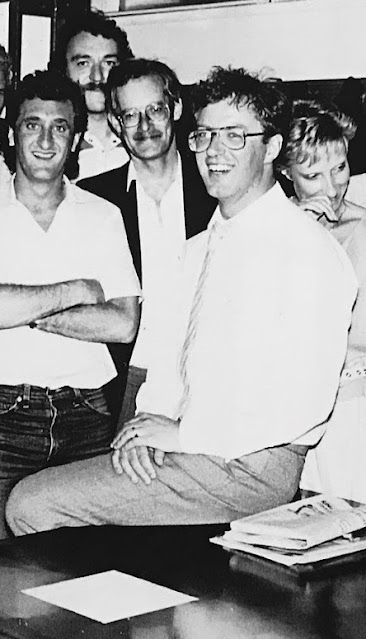 Stephen Hilliard, centre, on his departure from The Irish Times in 1986.
My cousin Noeleen Mulholland, who is a professional genealogist in Wellington, New Zealand, once told me that her advice to prospective clients was, “Once I start digging, I may find something that you will not like. Be prepared for that.” Her words came back to me today when I began research on my old Dublin newspaper, the long defunct The Irish Press, which I joined almost 48 years ago. I am a member of the Ex-Pressers group on Facebook and was alerted to an article by Ray Burke which appeared in The Irish Times yesterday, marking the 90th anniversary of the launch of The Irish Press, on September 5, 1931. This led me down many diverse paths, one of which to took me to an online publication, Village: Ireland’s Political and Cultural Magazine, and in particular to a series of pieces titled “Big Brother is Watching You”. In October 2018 the author, David Burke, looked into the infiltration of The Irish Times literary staff by members of the Official Irish Republican Army (OIRA) in the 1970s, at the time when I worked in Dublin. “A number of ‘A’-listed OIRA figures were, or became, employees at The Irish Times,” wrote Burke, and I read on to see if I knew any of them.

I was in for a huge double shock. First, to find that a very close and dear friend of mine, a proud Dublin Protestant called Stephen Patrick Hilliard, was not only an IRA intelligence officer, but that he was subsequently murdered, on January 9, 1990, aged just 42. I had had no idea of any of this until this morning, and I have to say it shook me up rather severely. (I hasten to add that his murder had no connection with Stephen being in the IRA.)

Over the past 40 years I have often wondered what became of Stephen. None of what did happen to him would ever have occurred to me. As saddened as I am by his unseemly death, I am far more stunned that all the time I knew him, he was an operative in the IRA. I had contacts with people I knew were working for the IRA, but Stephen was someone I never would have suspected for one second. He did tell me he had gone along - with no evil intent, he assured me - to a demonstration at the British Embassy in Merrion Square on February 2, 1972, and had got swept away with the crowd’s hysteria as the embassy was burnt to the ground. The demonstration was organised by the OIRA and followed the "Bloody Sunday" incident in Derry. But I took Stephen at his word, that he was there, initially, as no more than a mere bystander. Nonetheless, David Burke wrote in “Big Brother is Watching You”, “It is safe to bet that one ‘A’-lister at The Irish Times was Stephen Hilliard, who had been in the IRA in the 1960s.”

I first met Stephen soon after the British Embassy destruction, not long before he married a Cork friend, Betty O’Doherty, a Catholic. The wedding took place in the chapel on the lake at Gougane Barra in County Cork and the reception was held further west in Bantry. The couple had formed an deep attachment to West Cork and Kerry while working as extras on David Lean’s movie Ryan’s Daughter on the Dingle Peninsula in 1969. I came to know Stephen very well in late 1972, and among other things we did together was to play rugby for the Cork Examiner team at The Mardyke in Cork. I’d gone to Stephen’s aid in a scuffle during the match and later on, in the bar of the Green Door on Half Moon Street in Cork, Stephen noticed my right hand had blown up the size of a boxing glove. I’d broken it in the melee and in the heat of battle hadn’t realised it.

Stephen’s love of rugby started at The High School when that Church of Ireland (Protestant) establishment was still on Harcourt Street. It was the alma mater of the brothers Jack Butler Yeats and William Butler Yeats, and Stephen shared their passion for Ireland, the Irish language, Irish history and Irish literature. Stephen started work as a sub-editor at The Irish Times in 1968. When I moved to Dublin at the end of 1973, I stayed briefly with him and Betty at their home on the Rathmines Road. Betty at the time was a carer for Edward, the then eight-year-old autistic son of composer Sir Malcolm Arnold and his wife Isobel. Stephen, 5½ months older than me, had a very pronounced stutter, but he could sing like an angel. Many was the time we joined forces in singing Irish rebel songs in St Luke’s Cross.

Stephen told me a lot about himself. The story I found most amusing - if not entirely enlightening - was the one about when he was flatting with a group of mates and went with them to hear Billy Graham at an outdoor rally. Stephen got so carried away with Graham’s rhetoric that he returned to the flat and started to clean it up with such incessant fervor that his mates eventually kicked him out. I also remember him telling me that after leaving school, he’d spent a summer sweeping streets in London

Perhaps Billy Graham’s words had lingered in Stephen’s mind longer than I had thought. Among the highly surprising things I found out today was Stephen had become a vicar. Indeed, he was mentioned by Denis Carroll in the 1998 book Unusual Suspects: Twelve Radical Clergymen. In 1977 Stephen became the first chairman of Christians For Socialism, an interfaith organisation, and began studying theology at the University of London. After three years of further study at the Church of Ireland Theological College, Trinity, he was ordained a deacon in 1986 and a priest the next year. He spent some time as curate of Christ Church Cathedral and St Paul’s Glenageary before being appointed rector of Rathdrum, County Wicklow. He was only three weeks in the job when he was murdered during a break-in at his rectory. Stephen was stabbed in the neck by a 19-year-old drug addict, Liam Thomas Kenny, who was sentenced to eight years jail. Shortly after Stephen’s death, his role as an IRA intelligence officer was revealed in print by The Phoenix, an Irish political and current affairs magazine inspired by the British magazine Private Eye. National Union of Journalists members at The Irish Times sued The Phoenix for defamation, but found defamation laws do not apply to the deceased. The Phoenix also produced three former IRA men who confirmed Stephen had been in the organisation. In 1991 former Irish Times colleagues contributed to a book called True to Type, a collection of short stories published as a tribute to Stephen. Contributors included Maeve Binchy.

Stephen had a rich family history. His uncle was another former journalist, the Reverend Robert Martin Hilliard (1904-1937), the so-called “Boxing Parson” who fought as a bantamweight at the 1924 Paris Olympic Games. Bob Hilliard was an Irish Republican who served in the International Brigade in the Spanish Civil War after joining the Communist Party in London. He was killed in the Battle of Jarama in 1937. Stephen’s grandfather was the Reverend George Frederick Hamilton, Rector of Ballingarry, County Limerick, while his great-grandfather, Archdeacon Frederic Charles Hamilton, had at one time been Precentor of Saint Mary’s Cathedral, Limerick. Stephen is buried at Shanganagh Cemetery, Shankill, County Dublin. He was survived by Betty and a daughter, Catherine, who was just four at the time of his death.

Posted by Robert Messenger at 20:30

A very interesting article - thank you.