When Four Great Rivals Joined Forces for a Common Cause: The Educational Bureau of Portable Typewriter Manufacturers 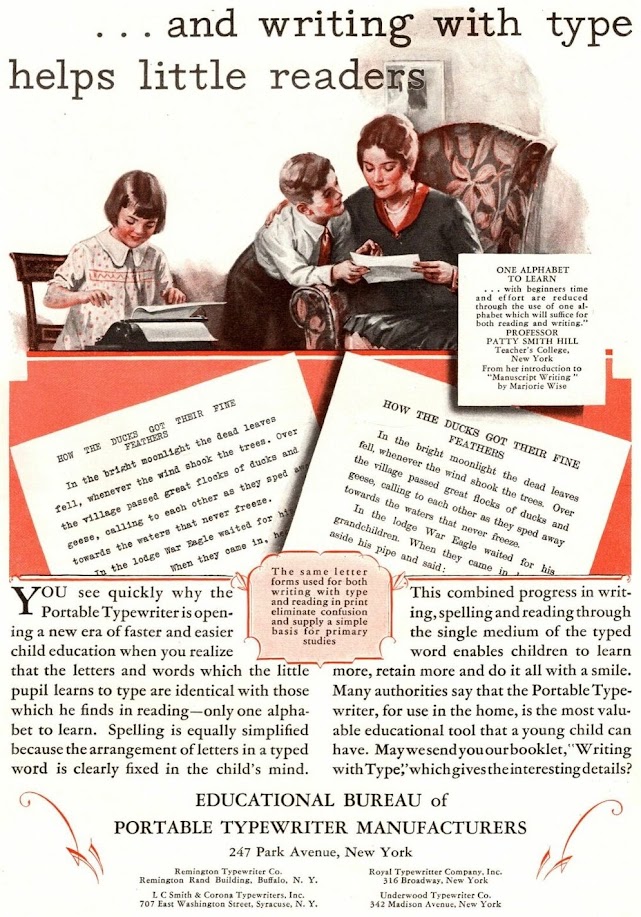 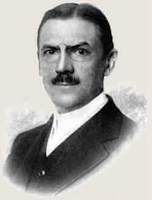 The L.C. Smith-Corona, Remington, Underwood and Royal typewriter companies gave a brief pretence of unity, and of appearing to bury their hatchets, in the northern summer of 1928, all for the cause of getting portable typewriters into American classrooms. The four fierce competitors in the typewriter market formed the Educational Bureau of Portable Typewriter Manufacturers, with headquarters in New York City at 247 Park Avenue, Manhattan. The organiser and first director was Frank Nicholas Kondolf (right, 1863-1944), who had been president of the Remington Typewriter Company until replaced in mid-November 1922 in a peace deal struck between shareholders and the board of directors. 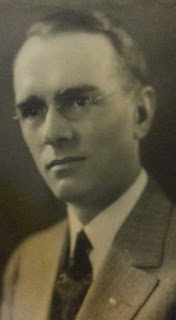 From 1931 the EBPTM was under the control of Joseph Lee Sweeney (left, 1891-1964), originally from Owensboro, Kentucky, who in 1919 had worked on a shorthand machine for the Stenotype company in Indianapolis and had been patenting typewriters since at least 1923. Before moving to the EBPTM, Sweeney had organised the Master Reporting Company in New York, offering the services of expert stenotypists. Sweeney quickly tired of trying to keep an uneasy peace between the four major typewriter manufacturers in the EBPTM, the more so when his suggestions to them that they accept a typewriter keyboard specifically designed for school use were ignored. Sweeney quit the bureau and in 1938 patented two “educational” typewriters (below). For one of these typewheel projects, Sweeney joined forces with the ubiquitous Harry Bates of the Bates Laboratories Inc (Bates’s typewriter enterprises have been extensively covered previously on this blog). 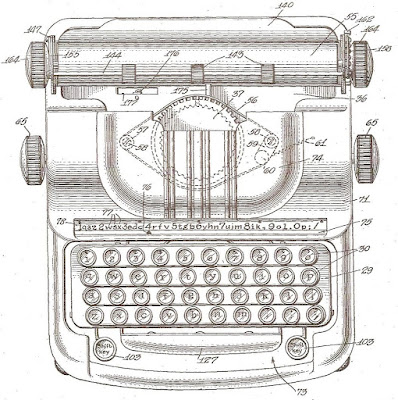 In forming the EBPTM, each company put up $8000 to get the bureau’s operations started and forked out an additional $19,000 each to continue the promotional campaign to the end of 1930 (the total represents $1.645 million in today’s money). Much of this $108,000 went toward advertising, with five different advertisements placed in publications such as Boy’s Life in November and December 1928, The American Magazine, The Literary Digest, Cosmopolitan, The Nation’s Schools and St Nicholas: An Illustrated Magazine for Young Folks. Among those endorsing the campaign was Patty Smith Hill, (1868-1946), an educator who stressed the importance of the creativity and natural instincts of children. She was on the faculty of Columbia University Teachers’ College from 1906-36. Another was Angelo Patri (1876-1965), a 1904 Columbia graduate who set out to engage students with tasks that went beyond book learning. He wrote a syndicated column on child psychology, “Our Children”, for newspapers and magazines. Others were educational psychologist Frank Nugent Freeman (1880-1961), who taught at the University of Chicago from 1909-39 and served as dean of the University of California, Berkeley's Graduate School of Education until 1948, Claude Anderson Phillips (1871-1960) of Missouri and Michael Vincent O'Shea (1866-1932) of Wisconsin. 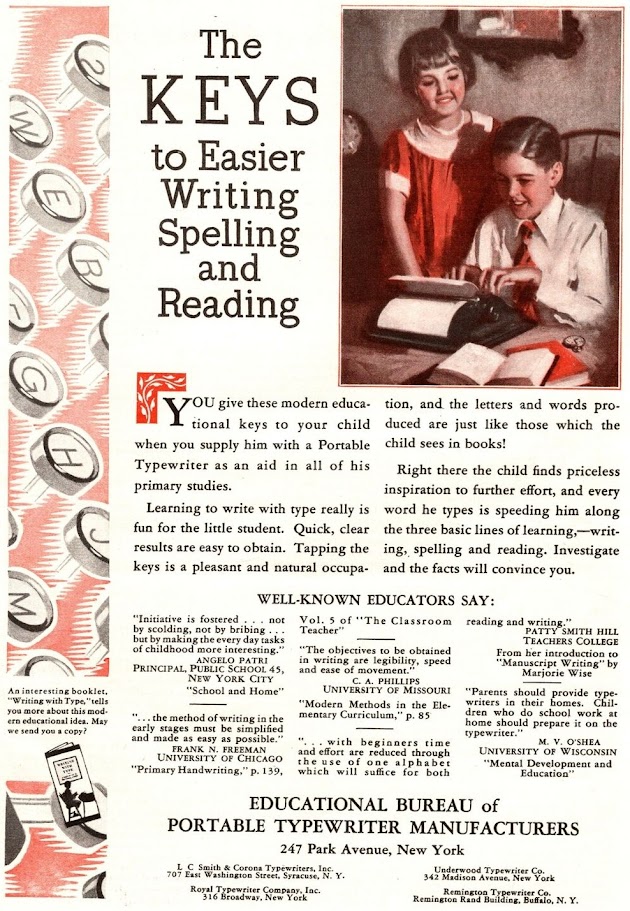 Freeman worked closely with the leading force behind the short-lived EBPTM exercise, Benjamin DeKalbe Wood (1894-1986), an educator, researcher and director-professor at Columbia, and the man who had convinced the four major typewriter companies to join together on this project. With EBPTM backing, Wood and Freeman embarked on a typewriters in schools experiment – almost certainly the largest systematic investigation of the impact of placing writing technology in a classroom environment ever undertaken anywhere at any time. In the first year of the experiment, 24 schools, 239 teachers and 8824 students were in a control (non-typewriter using) group and 1993 typewriters were supplied to 27 schools with 180 teachers and 6125 students in the experimental group (1839 typewriters were allocated to students, a ratio of about two typewriters to every seven students, and 154 to teachers). The performance of the students in the experimental group was tracked for a second year, when 100 more typewriters were supplied. Typewriters were used to do work in all subjects, including art. Students were also taught about care of the typewriters. The experiment started in September 1929 in public schools in Albuquerque, Altoona (Pennsylvania), Chicago, Elizabeth and Montclair (New Jersey), Pittsburgh, Roslyn (NY) and Springfield (Massachusetts), and in private schools in New York City, Philadelphia, Utica (NY) and Chicago. 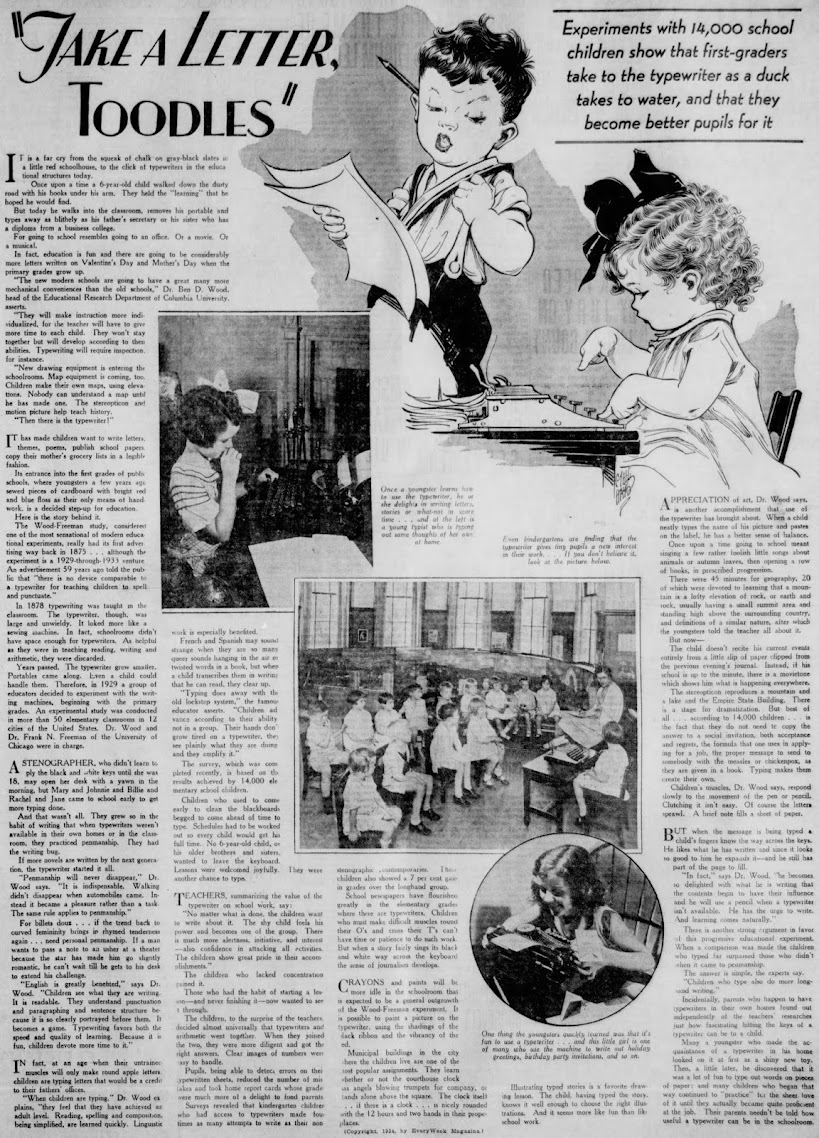 The experiment showed children could learn to type before they were able to develop writing skills. Children who had trouble coordinating their fingers at an early age developed a dislike for handwriting, but those who used a typewriter got a head start in self-expression. They also had a much higher output and a higher quality of work. They found typing to be glamorous and had much improved spelling, grammar and arithmetic. As well, they formed good habits in concentration and had excellent neatness. 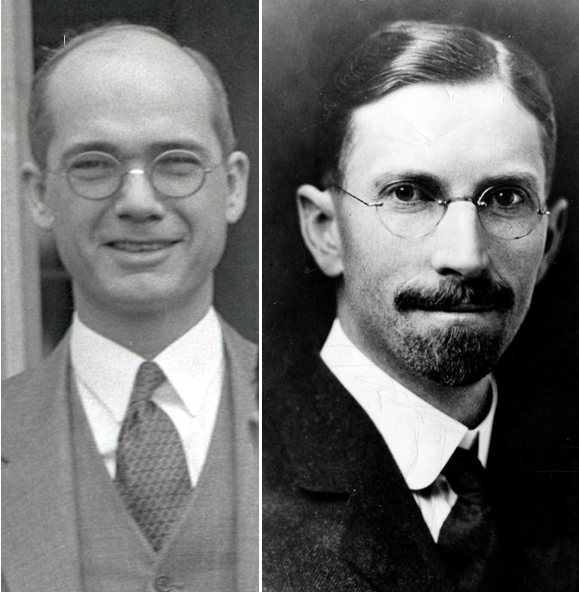 Ben D. Wood, left., and Frank N. Freeman.
As a result of the experiment, Wood and Freeman published through MacMillan in May 1932 An Experimental Study of the Educational Influences of the Typewriter in the Elementary School Classroom. Their work was quickly followed up in August 1932 by the second book in a two-volume report, Ralph Haefner’s The Typewriter in the Primary and Intermediate Grades

(also MacMillan). Haefner (right, 1894-1986), a New York teacher, had worked in conjunction with Wood and Freeman. The two books are available to read in full online. Rollo George Reynolds (1886-1958) of Columbia acted as an administrative adviser for the experiment. Wood was a pioneer in learning technologies and automated testing methods. Born in Brownsville, Texas, he graduated from Columbia in 1922 with a MA in philosophy. From 1927 he headed Columbia's collegiate research bureau. At the start of An Experimental Study of the Educational Influences of the Typewriter in the Elementary School Classroom, Wood and Freeman acknowledged, “This investigation was made possible by two grants, secured through the Typewriter Educational Research Bureau [that is, the EBPTM] … These two grants, one made early in 1929 and the other in the summer of 1930, were made as outright gifts for the support of the research program, and were set up as irrevocable trusts under the exclusive control of the undersigned [Wood and Freeman] as directors of the investigation.” Wood and Freeman said the four typewriter companies had made available 2100 portables (525 each) to use in the experiment. The authors thanked the companies for “their effective cooperation in avoiding publicity and in maintaining the scientific integrity of the experiment … ”

Wood believed a person's ability to think was innate, not acquired, and he considered thinking was based on a knowledge of facts. Associated Press in New York in March 1967 reported that Wood, after half a century of work in the field, had “brought to stake many of academia’s sacred cows”. AP said Wood believed “teachers spend too much time teaching … [He] has long insisted that the task of the teacher is not to follow a rigid curriculum, but to get the student to learn by thinking”. AP quoted Wood as saying, “A child’s mind is not an empty basket to receive what the teacher pours into it. It has taken us more than 2000 years to appreciate the lesson of Socrates – that education is the stimulation of creative thinking.” Wood went on, “Our schools are turning out intellectual paupers who come to depend on the teacher. Curiosity is a precious gift, and we must be careful not to vaccinate the child against it.”

In August this year Seattle education writer Audrey Watters published a new book, Teaching Machines: The History of Personalized Learning, in which she devoted a chapter to the EBPTM. Watters, an independent scholar, is author the Hack blogs. Watters wrote that the four companies involved “agreed to contribute equally to the bureau, which, according to its initial arrangement, would not sell typewriters or be operated for financial gain. Although they were underwriting the research, the typewriter manufacturers promised to abstain from directly marketing their products to the schools participating in the experiments or from using Wood or Freeman’s names in their advertising materials. Nevertheless there were numerous episodes when salespeople did approach the schools – ‘bootleg typewriter activity’, as the head of the Columbia University bookstore described some of the attempts to peddle products to the students and parents at Horace Mann School, a private school with ties to Columbia’s Teachers College where some of the typewriter research was being conducted. The companies were admonished for this behavior, but there were no real consequences.” Watters went on, “After the initial flurry of good publicity from the release of the Wood-Freeman report, the typewriter companies became increasingly frustrated with the bureau’s direction and the slow pace of adoption of typewriters by schools, most of which found making any purchases of any instructional devices utterly unfeasible during the Great Depression. The majority of the sniping in the correspondence to the Educational Bureau of Portable Typewriter [Manufacturer]s involved one manufacturer accusing another of improper behavior, as everyone involved was trying, if nothing else, to keep their heads above water during desperately difficult economic times.” The Wood-Freeman experiment is also covered in The Computer and the Page: Publishing, Technology and the Classroom by James Robert Kalmbach (1997).
Images from Wood & Freeman's book: 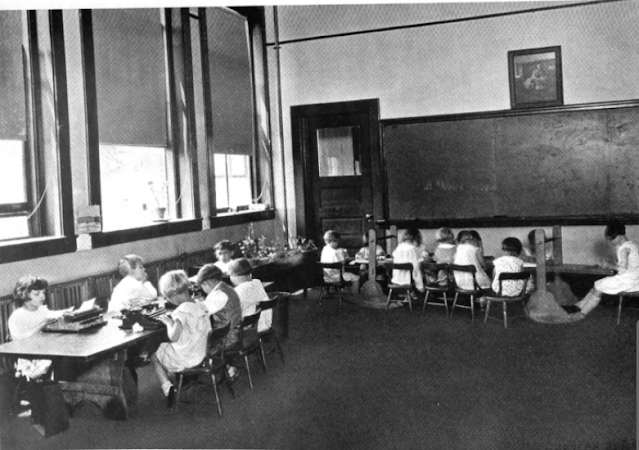 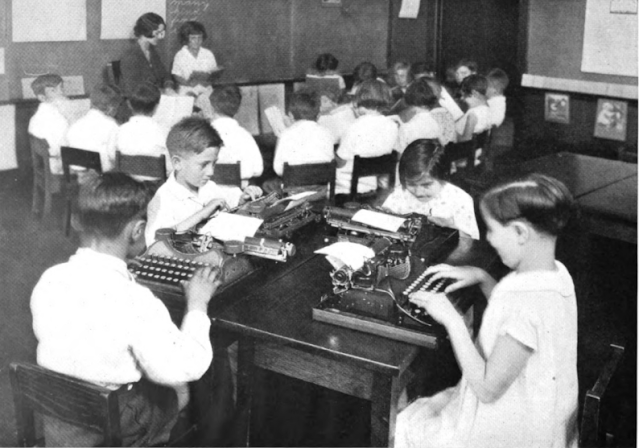 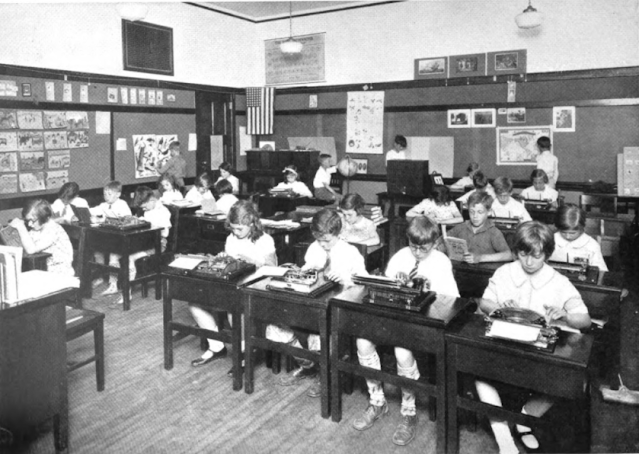 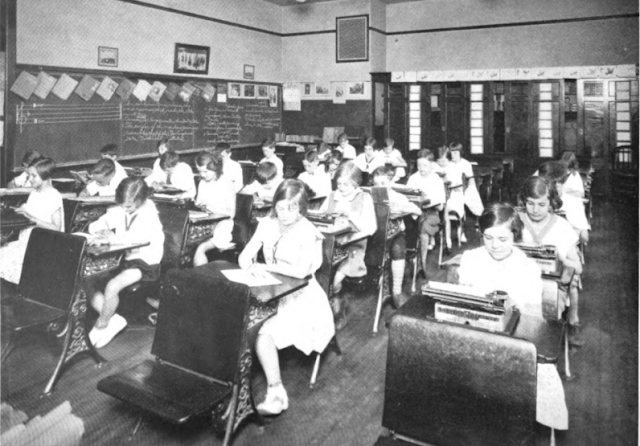 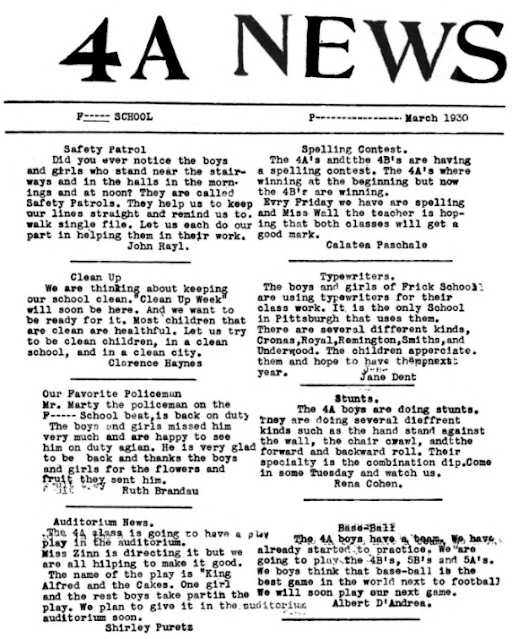 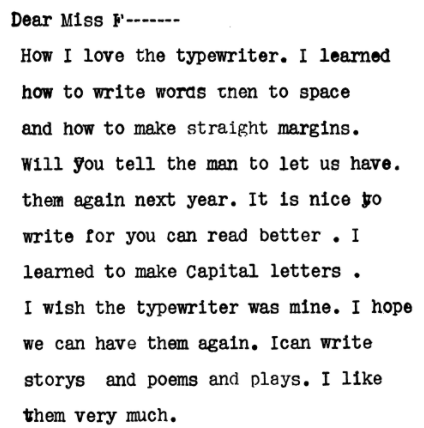 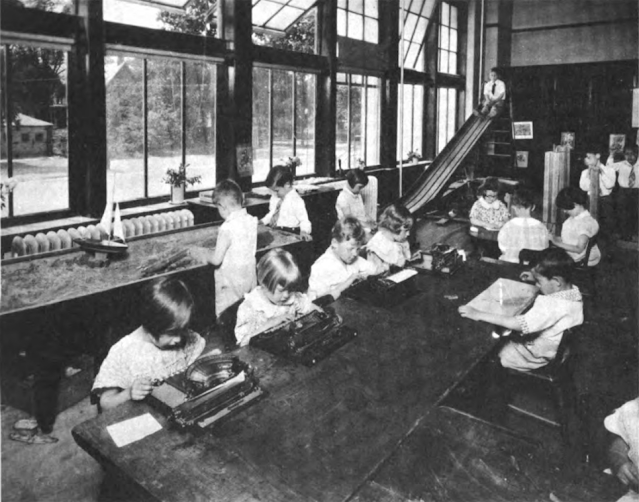 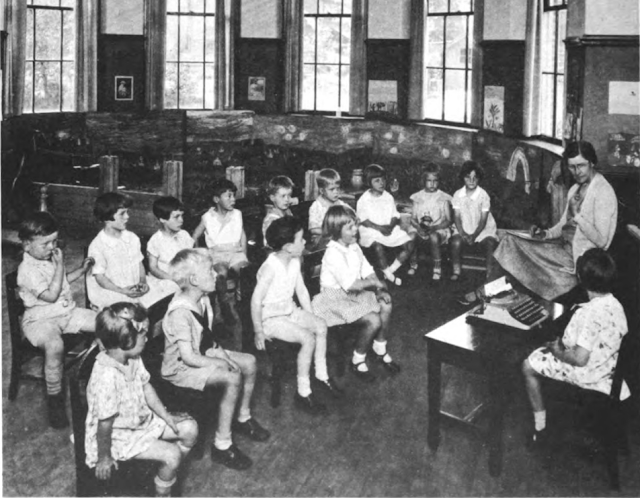 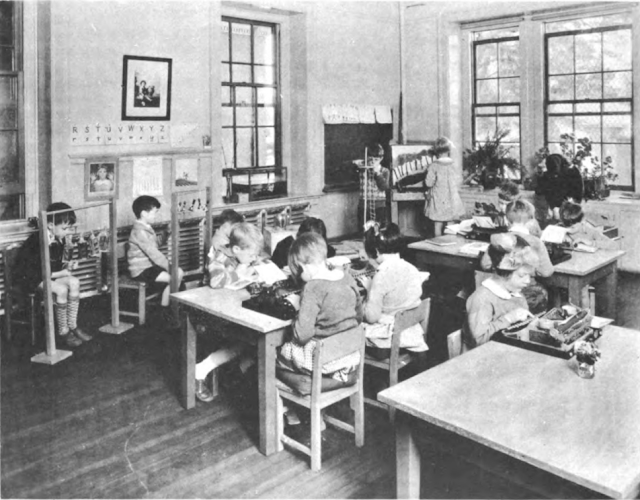 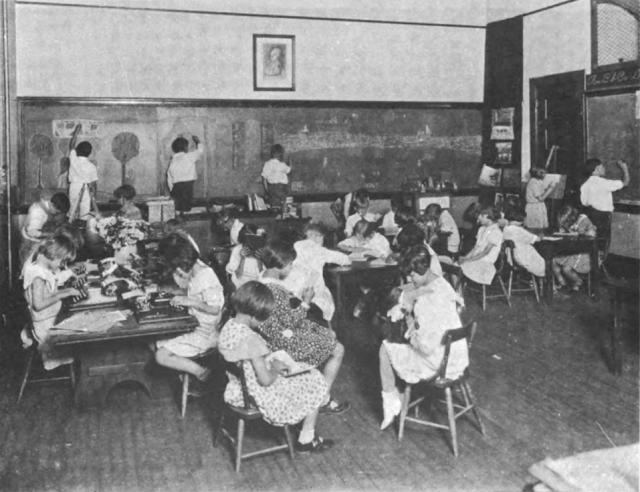 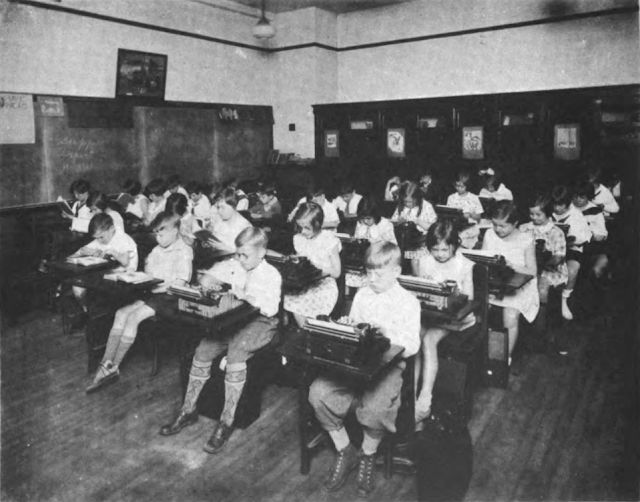 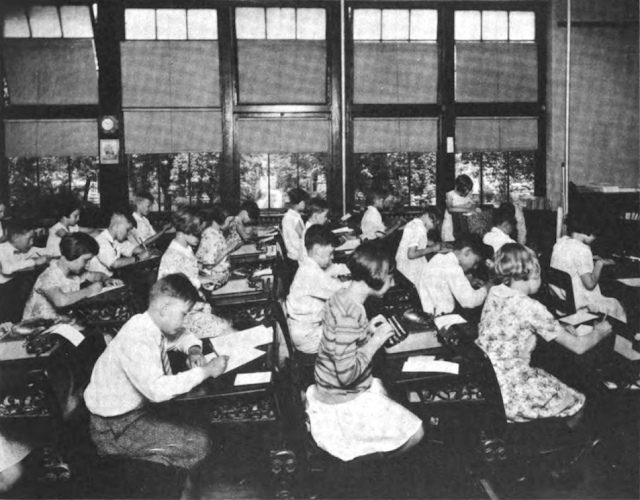 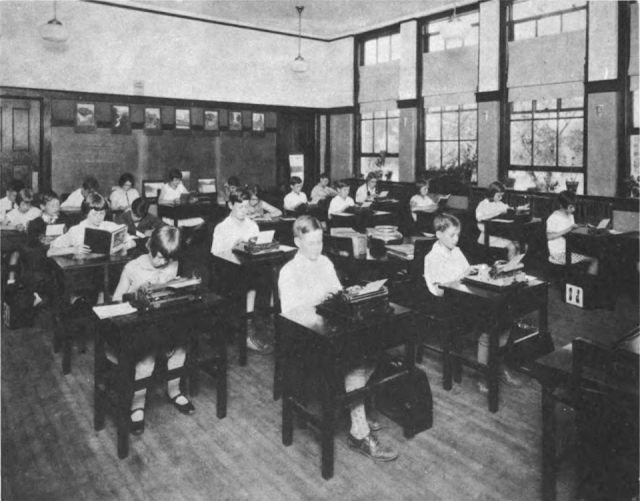 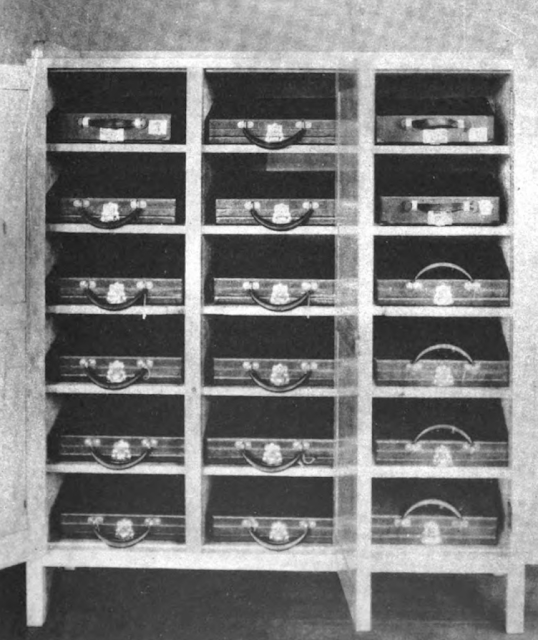 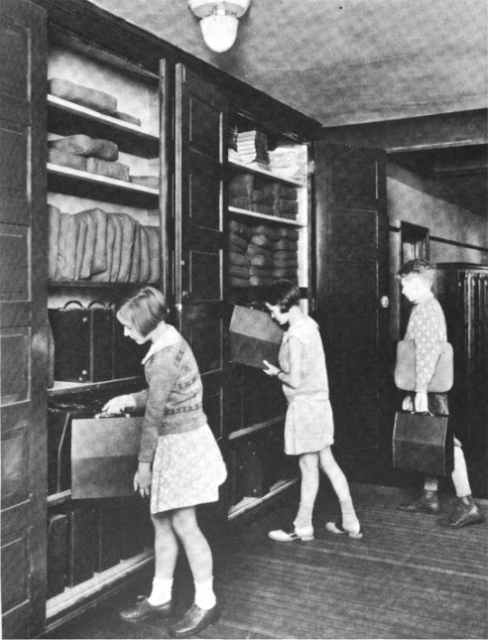 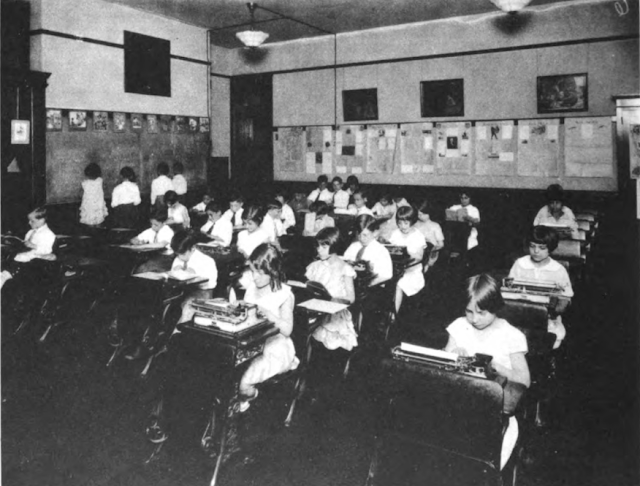 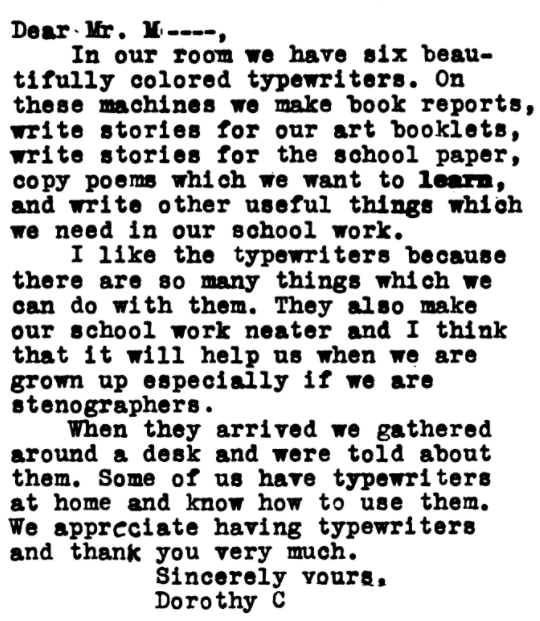 First time I've heard of the EBPTM. The findings seem to reflect what teachers have found recently when they replaced computers and manual writing with typewriters. Hopefully Blogger will work this time.

Great research on an intriguing effort. There are many parallels to today’s push to introduce more and more digital technology to every level of education. But of course, I have more faith in typewriters.