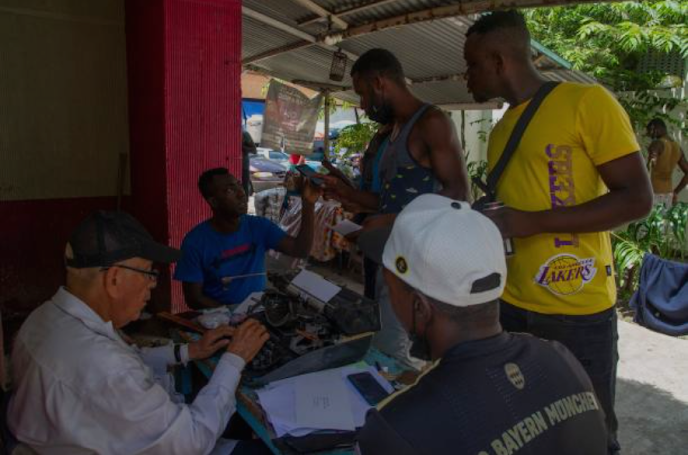 An Olympia SG3 typewriter is being used this week in the main square of Tapachula in the Chiapas state of Mexico to fill in “regularisation forms” for migrants who are part of a caravan hoping to reach the United States. Hundreds of Haitian and Central American migrants remain stranded in the square in search of solutions to their situation, and in need of employment and food. The typist is filling out a form headed “Regularisation by expired document or performing unauthorised activities”, a “procedure form for the regularisation of immigration status in the modality by having [an] expired document or performing unauthorised activities.” It is applicable to the foreign person with irregular immigration status who has an expired immigration document or who performs activities different to those authorised so that he or she no longer satisfies the requirements by which a determined stay condition was granted. The Mexican Government asks that the form for procedure presentation to request an immigration stay should be filled out electronically through its website, but most of these stranded migrants have no access to the internet. So for them a typewriter and typist are required

Newsweek quoted Associated Press today in saying migrants have repeatedly clashed with Mexican authorities as they've attempted to leave Tapachula to continue travelling north amid an enormous backlog of asylum cases. More than 77,000 people have applied for protected status in Mexico this year, 55,000 of them in Tapachula. Activist Luis Villagrán of the Centre for Human Dignity estimates there could be as many as 100,000 migrants stuck in Tapachula, nearly one for every three of the city's residents. Frustrated with a system that was already behind and further bogged down by the pandemic, hundreds of migrants have attempted to leave the city this month. 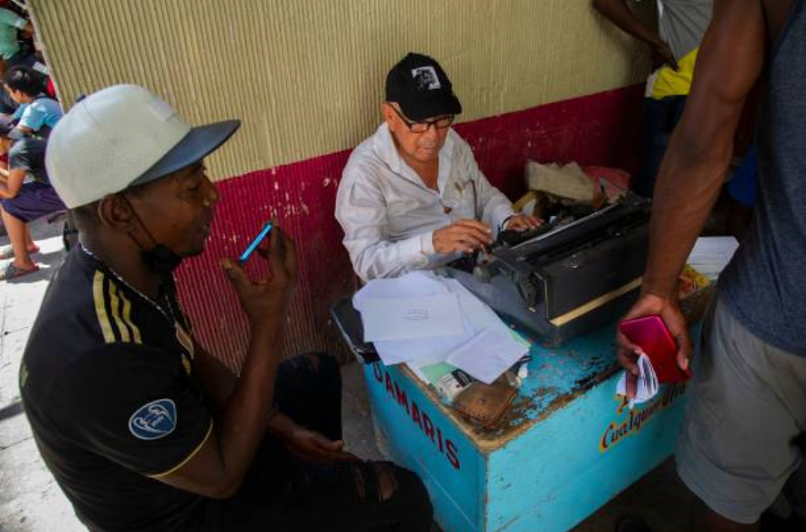 Mexican authorities have stopped the migrants each time they've attempted to leave, sometimes violently. Threatened by the US with tariffs if it fails to slow the flow of migrants to the border, Mexico has deployed its National Guard and more immigration agents in an attempt to contain migrants in the south. As many of the migrants clashing with authorities are travelling as families, Mexican President Andrés Manuel López Obrador has voiced frustration with the containment strategy, saying it's not sustainable.

Unable to find other work because they still lack legal status, Haitian migrants sell meals, soft drinks, clothing and offer services such as haircuts, manicures and tailoring under umbrellas in the street market.

Posted by Robert Messenger at 09:03

I knew and worked with many Haitians when I worked in FL. I give them credit for wanting to learn English, and doing it, as well as being good workers.

It's really striking that in 2021, the possibility of salvation (no matter how remote) may depend on a typewriter.