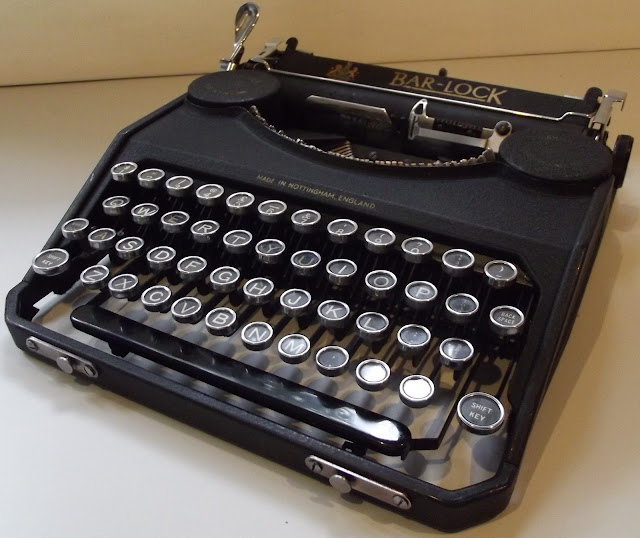 I was surprised last year when a standard-sized British-made Bar-Lock frontstrike typewriter came up for sale in Australia. Up to that point, I had only been buying portables, partly because they are postable. Australia Post won’t handle the larger machines. 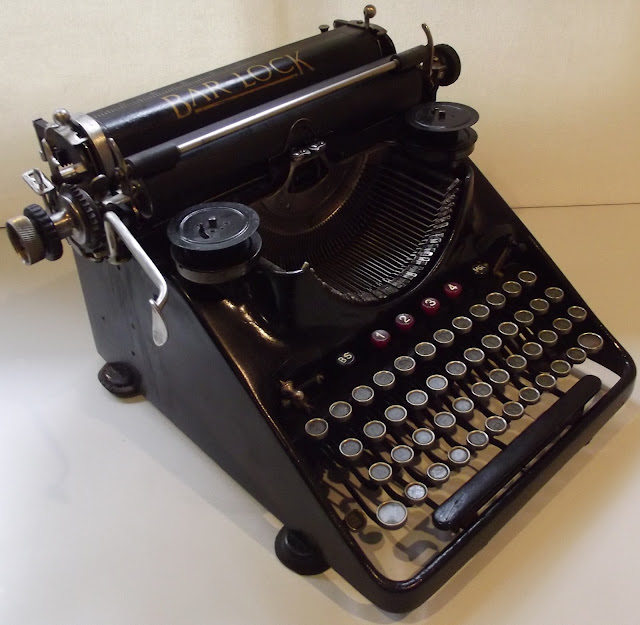 But I simply had to have this Bar-Lock, so curious was I about it, and after some hassle I was able to organise for a courier company to go into the hills beyond Adelaide in South Australia and pick it up for me. 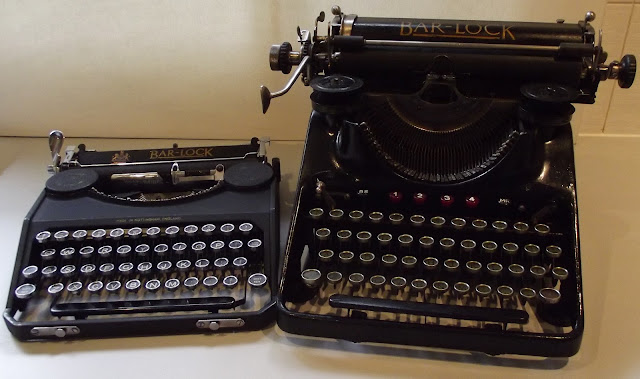 I was pleased I went to all the trouble. The Bar-Lock, which I believe is a Model 17 (circa 1927), is so different and impressive in design, and such a fine typer, too. 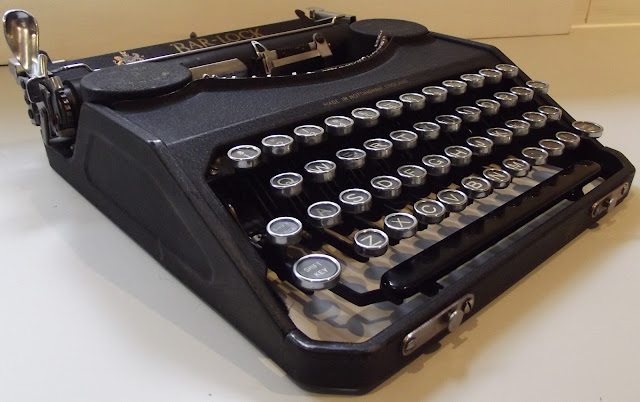 And yet I still had no idea this same Nottingham-based company also made a portable in the mid to late 1930s. That is, until my eyes popped out when I saw an alert to a British eBay listing from Adwoa on Google+. Until then, the only portable I knew to have come from Bar-Lock in Nottingham was the beautiful Bar-Let: 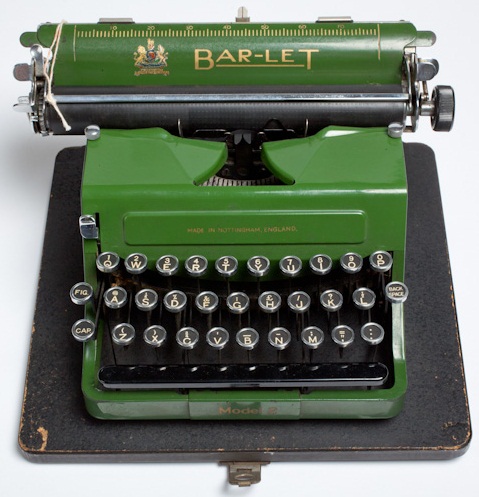 How wrong could I be? 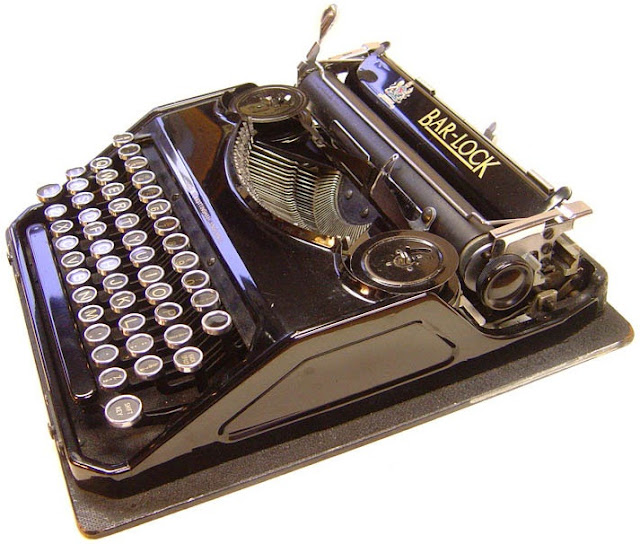 Richard Polt quickly pointed that not only was he aware of the Bar-Lock portable, but that he had just such a machine in his collection (seen above). The link he provided to his Bar-Lock portable gave a far clearer impression of what it looked like. Again, I just had to have it. 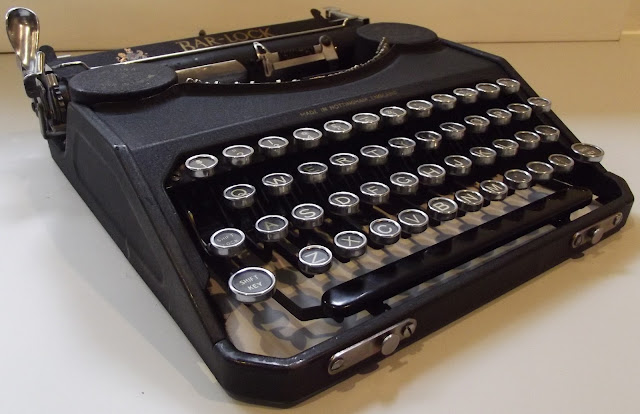 Incredibly, I was the only bidder at about £35, and the seller – in Romford, Essex - was most helpful in agreeing to post it to Australia (it had been listed for sale in Britain only). 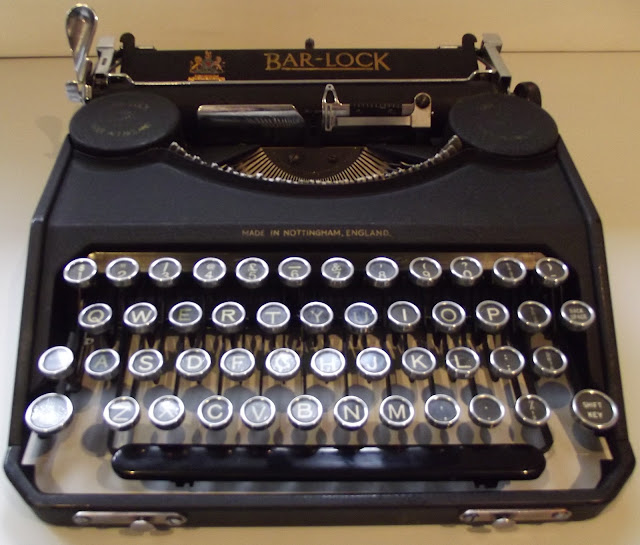 Again, I am very pleased I went to the bother. This is a quite delightful portable, one that, like the standard-sized Bar-Lock, is both distinguished and distinctive in appearance.

For all that, my first impression when I unpacked the portable was that the squarish metal cover looked so similar to that which came with the early Hermes Featherweight-Baby. 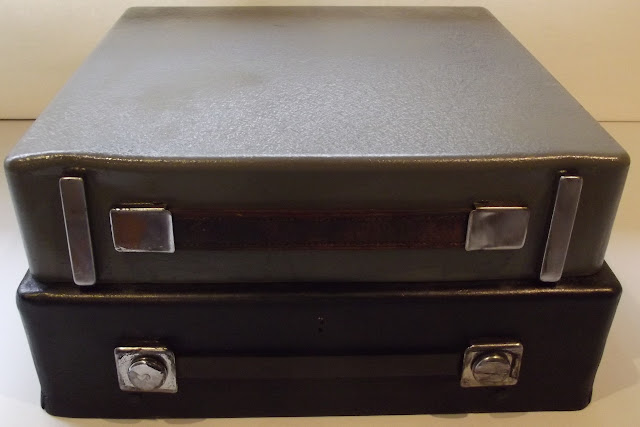 So I got out a Hermes cover and compared the two. There was little between them in size, and the design was almost identical. 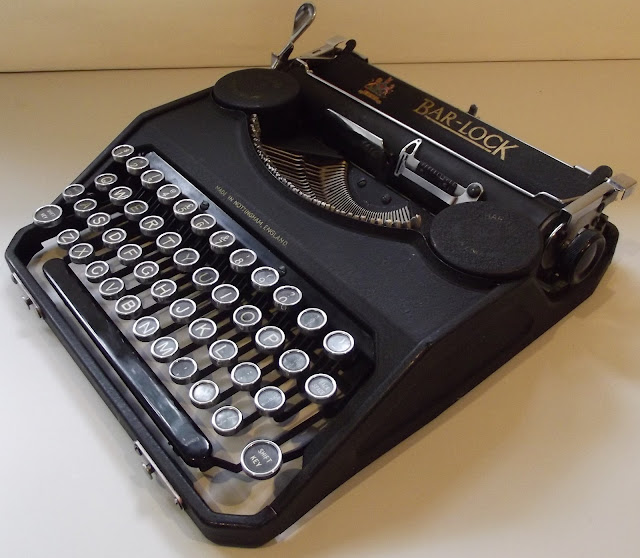 More to the point, the Bar-Lock portable has significantly more space around it inside the cover than the Hermes does – I have always thought that the Hermes cover was just a tad too tight. This alone accounts for the slightly larger size of the Bar-Lock cover. The Bar-Lock has a base which extends a little beyond the width of the machine itself, while the Hermes base is almost the same size as the typewriter, hence the squeeze with the cover on. The covers for both models attach the same way, as one can see from the latches at the front of the typewriters themselves. 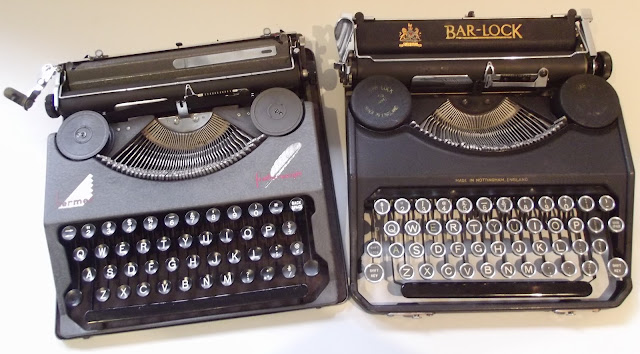 So when you actually compare the Bar-Lock portable with the Hermes Featherweight, machine-by-machine, there isn’t a lot in it.

I’m left with the thought that Bar-Lock borrowed very heavily from the Hermes with this design. If, for example, Bar-Lock saw its competition as coming almost exclusively from other British typewriter makers, it would have been only too well aware of the deal the British Typewriters Company in West Bromwich had struck with Paillard to make Hermes Featherweights as Empires (notably the Aristocrat). 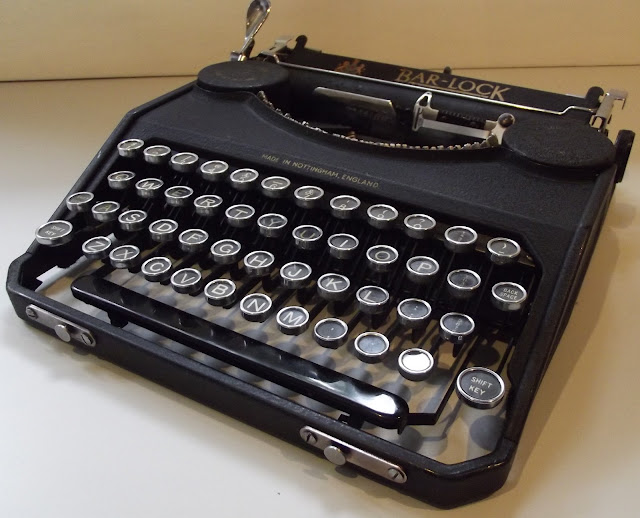 British Typewriters got in first with the Hermes arrangement because Norman Wetherall Mawle, a businessman of Sutton Coldfield, attended a machine exhibition in Switzerland in 1935, saw the Featherweight and immediately bought the British Empire rights to it. Mawle also acquired The [British] Blick Typewriter Company from the Rimingtons (Rimington, not Remington). The organisation Mawle set up, British Typewriters, was eventually taken over by Smith-Corona in 1960. 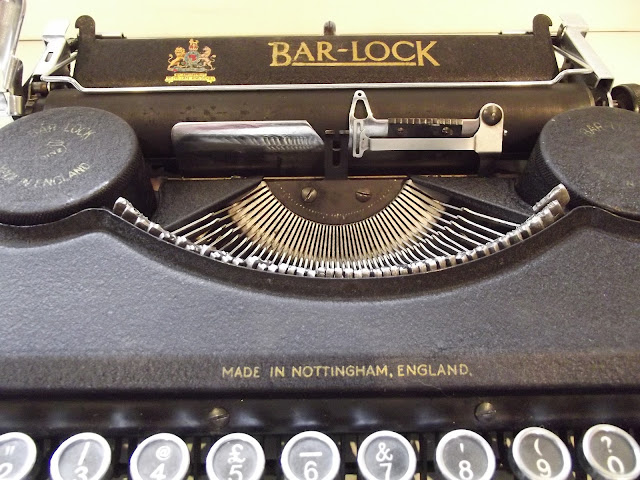 Meanwhile, the Bar-Lock Typewriter Company of Basford, Nottingham, was starting to feel the financial pinch around the mid-1930s. It wouldn’t surprise to find that, feeling a desperate need for the design for a small portable (it continued to produce the Bar-Let until the outbreak of World War II in 1939, by which time almost 59,000 had been made) Bar-Lock took its lead from the revolutionary Prezioso-designed Swiss model. 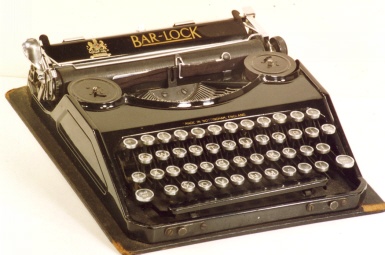 With both Richard Polt’s Bar-Lock portable and the one shown (see above) from the late Tilman Elster’s Collection on the European Typewriter Project pages, 1938 is given as the year of production. 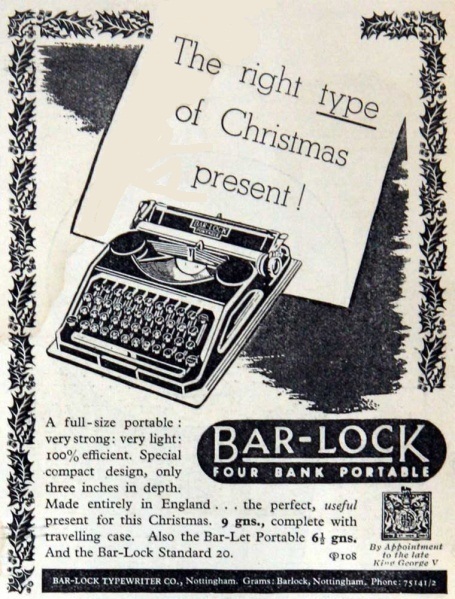 However, there is evidence that an advertisement for the Bar-Lock portable appeared two years earlier than that, in September 1936. 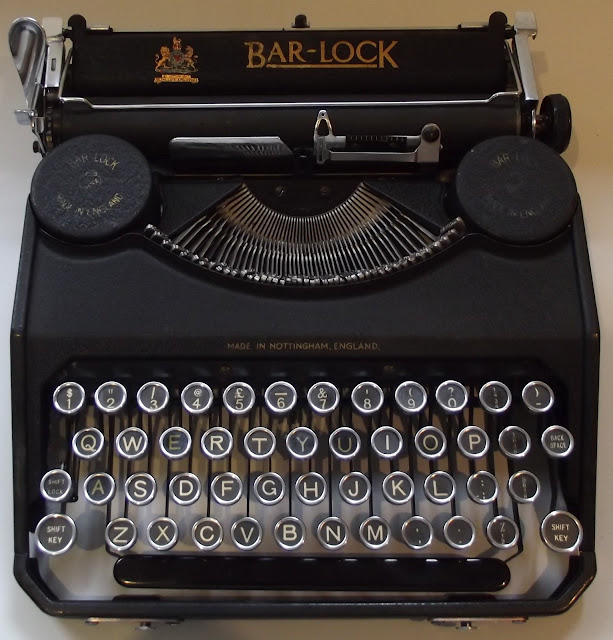 What makes this even more curious is that Richard Polt’s Bar-Lock portable has the low serial number of 2501 and the one from Tilman’s collection has serial number 2687. Surprisingly, mine has the serial number 9316. I say surprisingly, because to add to the confusion, the 1973 British Typewriter Age Guide claims fewer than 6000 of these models were made – and all between 1938-39. The highest serial number it gives is 5810, with 3000 made in 1939. 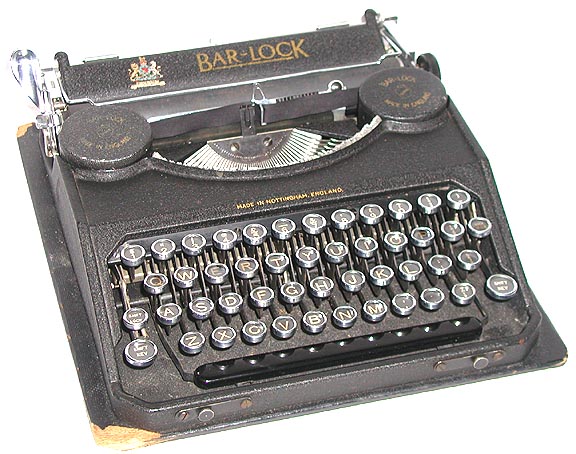 There are notable differences in the finish of the machines. Richard’s and Tilman’s have a smooth, shiny black finish, whereas mine and one shown in Chuck Dilts’s collection (see above; no serial number given) have a black crinkle finish. 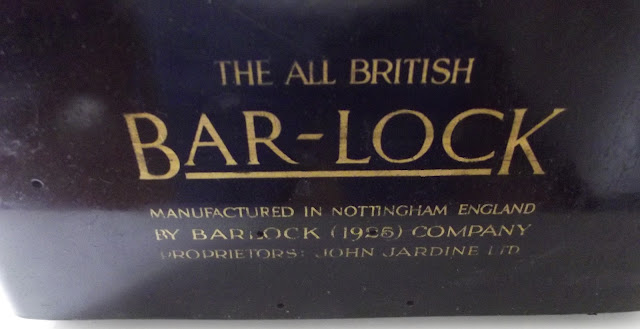 Sir Ernest Jardine established Nottingham’s Bar-Lock company in 1925, with the owners listed as a company started by his late father, John Jardine. 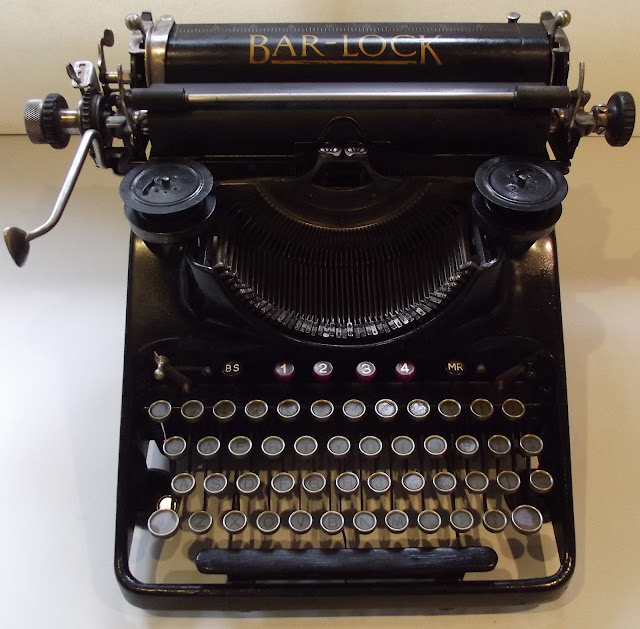 Over the ensuing 70-odd years, this organisation, at least in part, survived under a wide range of names, from Bar-Lock to Jardine to Byron; Petite to Britains Petite (no apostrophe); Byron International to Dobson Park Industries. It became most famous for making toy typewriters, which it started to do under an arrangement with the Western Stamping Company of Jackson, Michigan, signed in about 1949. This enabled Jardine to make Tom Thumbs for the US market and identical Lilliputs for the British market. The toy typewriter side of the Jardine empire lasted far longer than did the real typewriter part of it. 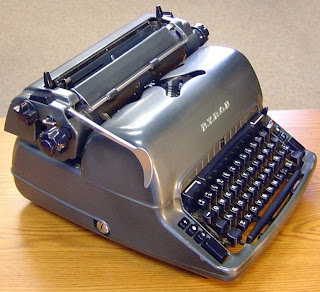 Richard Polt Collection
Things had started going downhill after the death of Sir Ernest in 1947. In 1953 the company became known as Byron Business Machines, which made the Byron standard-sized typewriters (above). Byron sold out to the Oliver Typewriter Manufacturing Company, of Croydon in London, in 1958. But the combined efforts of these two firms, originally bearing the names of two of the famous North American brands, were to no avail, and Oliver closed in 1959. Bar-Lock, meanwhile, lived on in toy form. 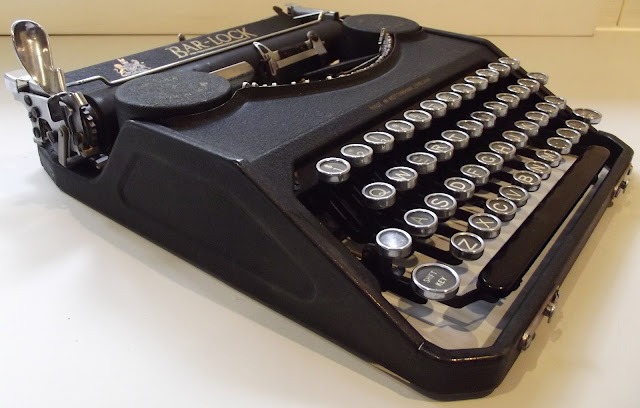 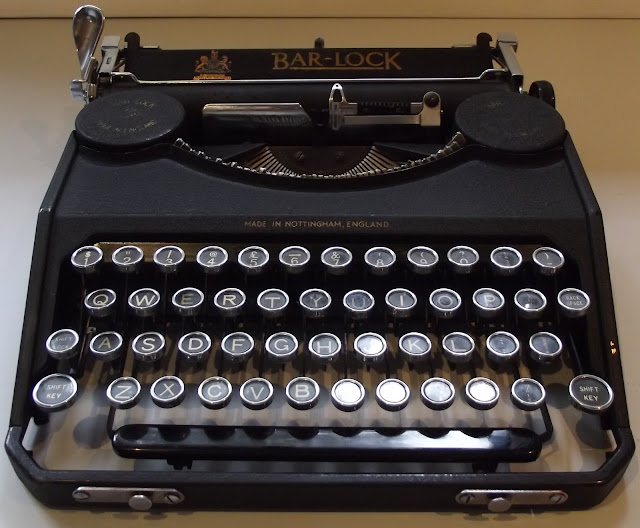 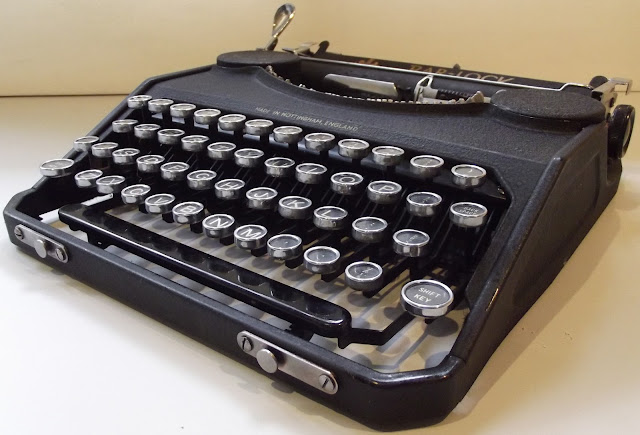 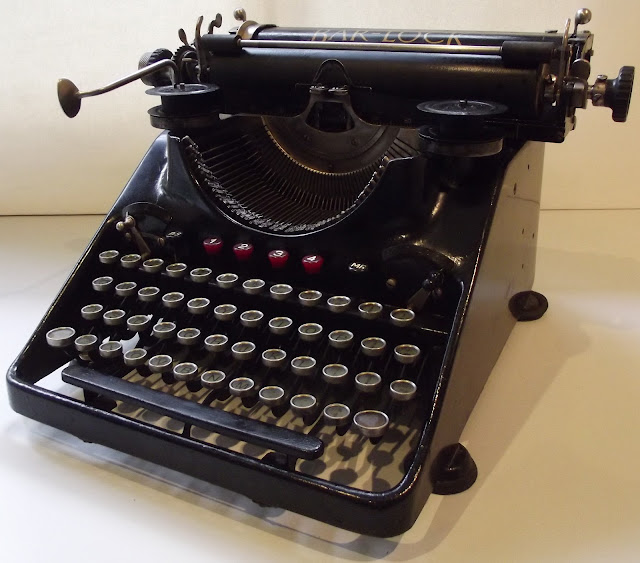 Posted by Robert Messenger at 00:56

Yet another fascinating and informative post. Lovely machine - thanks for the tour.

That's a fantastic machine. The similarity to the Hermes Baby is very interesting. I think I'd prefer it over the original, maybe just because it has chrome keys.

Good post. Yes, I'm sure it's an imitation (though not clone) of the Hermes Baby. The action on mine is sort of slushy, particularly the shift, which doesn't respond until I've pushed the key down a ways. Not a great typewriter, but a good looking one.

The big Bar-Lock is very impressive, I love the shape of it.

The scalloped top plate is a giveaway I suppose. Earlier Aristocrats shared it too, with the Hermes. I'm so pleased the British typewriter industry continues its contribution to the country's export drive. Now feeling a twinge of guilt about my neglected Bar-Let. Maybe today's the day to blow the dust off and see if I can make it work.

I have truly enjoyed looking at all of your lovely machines. My Grandfather was a typewriter repairman and had an wonderful collection of typewriters. When my Grandmother passed. Each grandchild became an owner of an antique typewriter. Mine is a Bar-Lock #4. I was researching its worth when I found your site. Any information for me?

reguarding the previous message....
Im sorry I dont have a google account My name is Amy, I live in Richmond VA. I will check back in for your reply.