All Black and Blue: The Mystery of the Harry Atkinson Typewritten Letter 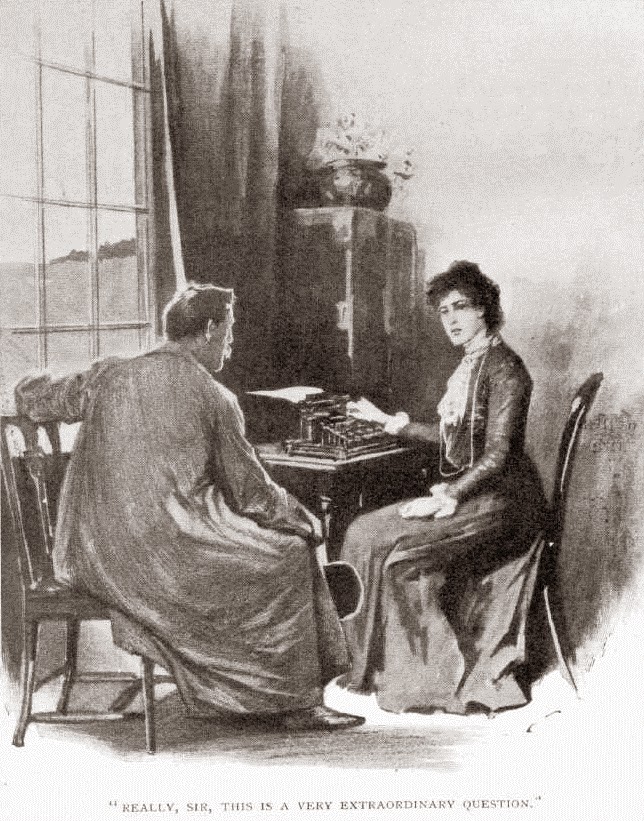 Sidney Paget's illustration of Mrs Lyons at a Remington in Arthur Conan Doyle's Sherlock Holmes story, "The Hound of the Baskervilles".
Only one fellow Typospherian (thank you, Reverend Ted) has owned up to having read it, but the latest edition of ETCetera contains an article from me on "Typewriters in Crime: A Dangerous Tool in the Hands of the Evil-Minded". It opens with a Sherlock Holmes quotation: "I think of writing another little monograph some of these days on the typewriter and its relation to crime." The quote comes from Arthur Conan Doyle's 1891 short story “A Case of Identity”, in which Holmes' skill in identifying typewriter typefaces unlocked the mystery of Hosmer Angel. 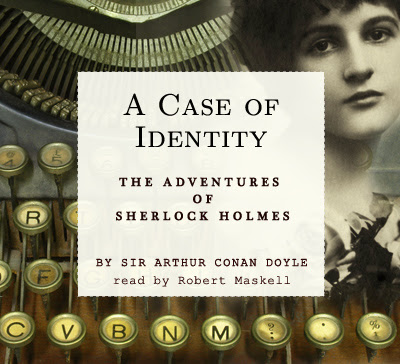 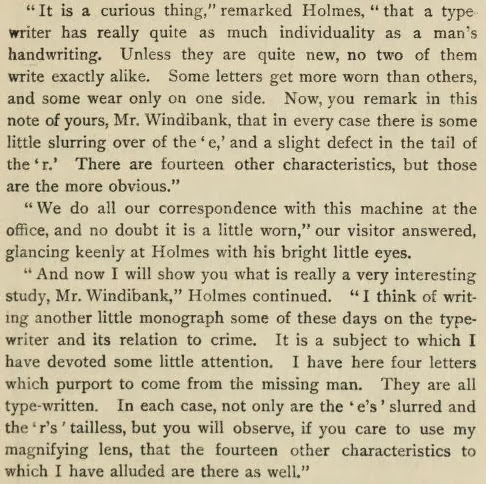 As I said in the article, Conan Doyle (Holmes) was away ahead of his time when it came to forensic science and typewriters, and typewriters were on more than one occasion critical elements in his stories. For example, the Sidney Paget illustration at the top of this post shows Mrs Lyons at her Remington in "The Hound of the Baskervilles".
Mention of the surname Baskerville conveniently brings me to a small piece of trivia which is relevant to this post. And it has nothing to do with the fact that Baskerville is a transitional serif typeface designed in 1757 by John Baskerville (1706-1775) in Birmingham, England: 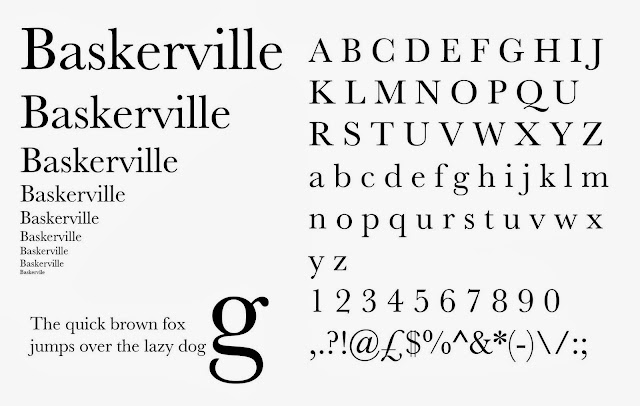 No, my reference is to an absolute hound called Albert Henry Baskerville (1882-1908), a New Zealand rugby union player who was responsible for introducing the professional rugby code (then called Northern Union, now rugby league) to New Zealand and Australia in 1907. But for Baskerville we might all still be playing rugby union in Queensland, New South Wales and the Australian Capital Territory. Baskerville's evil deed done, he contracted pneumonia on the ship taking his "All Golds" team of New Zealand mercenaries (which in England had included Dally Messenger) from Sydney to Brisbane and he died in Brisbane aged 25. After his death, the Sydney Mail wrote, "It was he who practically originated the professional Rugby movement in Australasia." New Zealand and Australia will contest the rugby league World Cup final at Old Trafford in Manchester next Saturday, the NZ "Kiwis" team having edged out host country England at Wembley Stadium last Saturday.

Distant relative Dally ("The Master") Messenger with Bert Baskerville in the 1907-08 New Zealand "All Golds" Northern Union football team.
Happily, the amateur version of rugby did survive Baskerville's hounding - indeed, it continued to flourish in New Zealand and managed to just hold on by the skin of its teeth in this country (with the unrewarded aid of Fiji). Finally, in August 1995, discontent in Australia led to rugby union becoming a professional code itself, thanks to Rupert Murdoch's largesse.
Yesterday in Dublin, the New Zealand national team, the All Blacks, scored a last-minute converted try to pip at the post Ireland and become the first national team in the professional era (18 years) to complete a full year's schedule unbeaten. The All Blacks scored 14 straight Test wins (against France four times, Australia three, South Africa and Argentina twice each, and Japan, England and Ireland once). 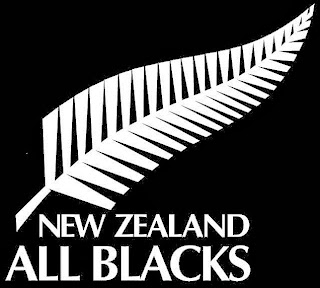 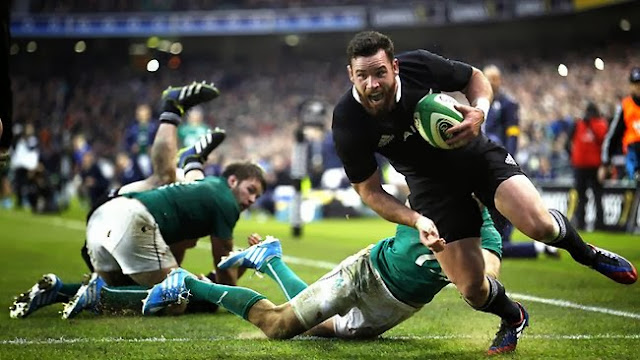 Ryan Crotty scores the winning try in Dublin.
Regular followers of this blog may have twigged by now that I have had a 58-year love affair with rugby and the All Blacks. They might have gathered an inkling of this in one or two of my posts. I might be an Australian, but old passions do die hard. Which brings me, at last, back to typewriters .. and crime. 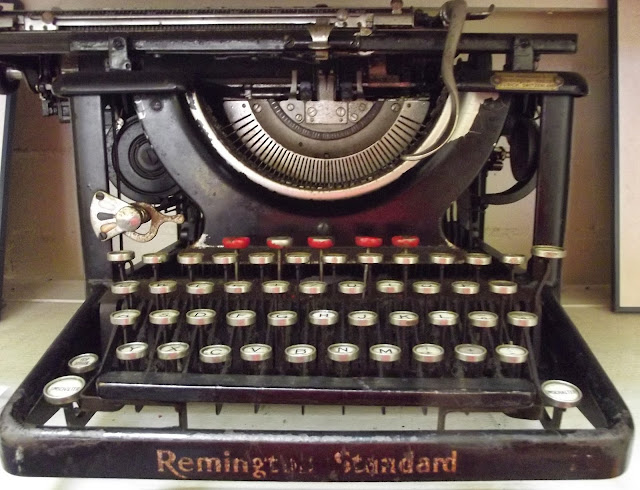 A Remington typewriter (No 11?) seen in a Greymouth cafe last Easter.
Greymouth is 25 miles north of Hokitika.
Had I known about it at the time, I might would have included this story in my ETCetera article. A typewriter played a part in one of the great mysteries in the rich 143-year history of New Zealand rugby. 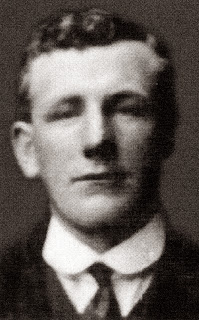 Harry Atkinson (above) was a wharfie in my home town of Greymouth when in 1913 he was selected to play for the All Blacks against Australia and then to go on a tour to the United States, Canada and Fiji. Universities along the western seaboard of the US had banned American football in 1905, taking up rugby union instead. New Zealand and Australia both toured there to try to further the code. The US won the last two Olympic Games gold medals contested in rugby union, in 1920 (Antwerp) and 1924 (Paris). Rugby returns to the Olympics in Rio in 2016.
Harry Atkinson played for the Kohinoor club, which in 1915 switched to rugby league (my uncle and brother both later played for it). 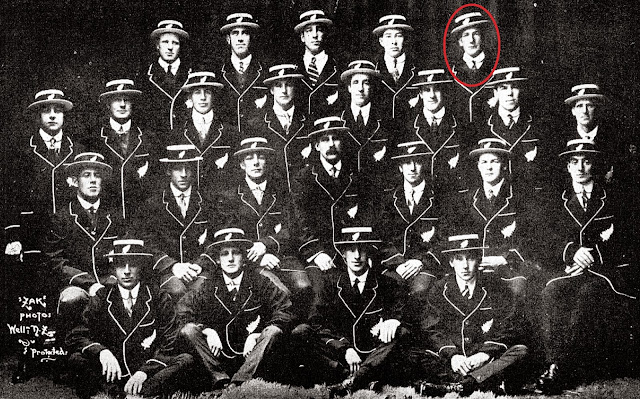 Atkinson in the 1913 All Blacks team in North America.
But Atkinson almost missed the experience of his lifetime, to tour North America as an All Black in 1913, after becoming the victim of a cruel hoax. 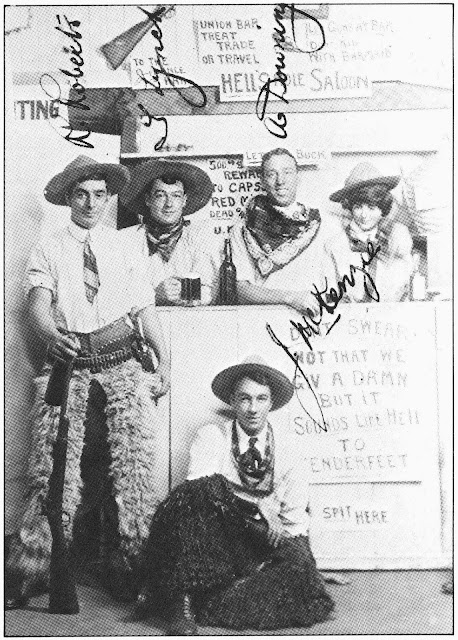 The 1913 All Blacks in San Francisco.

A typewritten letter (using a blue ribbon) and signed (in type) "H.Atkinson" was sent to the New Zealand Rugby Union from the Hokitika post office (25 miles south of Greymouth) on August 19, 1913, just three weeks before the All Blacks touring team assembled in Wellington. Atkinson was actually replaced in the team. Eleventh hour investigations by rugby officials in Greymouth and Wellington and the Hokitika police exposed the attempted fraud but not the criminal responsible for it.

Atkinson went on the tour and played in nine of the 17 matches. The All Blacks won all 17, scoring 677 points (averaging almost 40 a match) against just 9 points (in total!). NZ beat the All-American team 51-3 in Berkeley. It played in Oakland three times, including against both the Olympic (opening match) and Barbarians clubs. The All Blacks' utter dominance in California was pretty much the kiss of death for US rugby union. 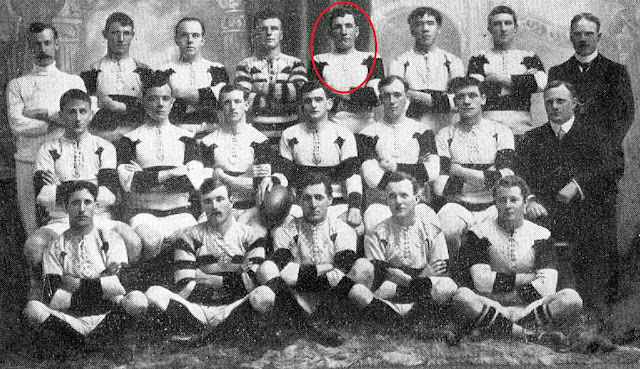 That was indeed a cruel hoax.

Your ETCetera article was excellent -- it shed more light on some cases that were familiar to me, and introduced me to some brand-new facts, such as the existence of those catalogs of typewriter typefaces used by forensic examiners.

I think the typewriter in Sidney Paget's illustration looks vaguely like a Yost.

Thank you Richard, I'm glad someone liked the article. I agree about the Paget "Remington". But it is identified as a Remington in the story, so I guess Paget just took a stab at it! I bet you are pleased the mighty All Blacks have played in Oakland?