Fakin' It and Fixin' the Green Corona Portable Typewriter 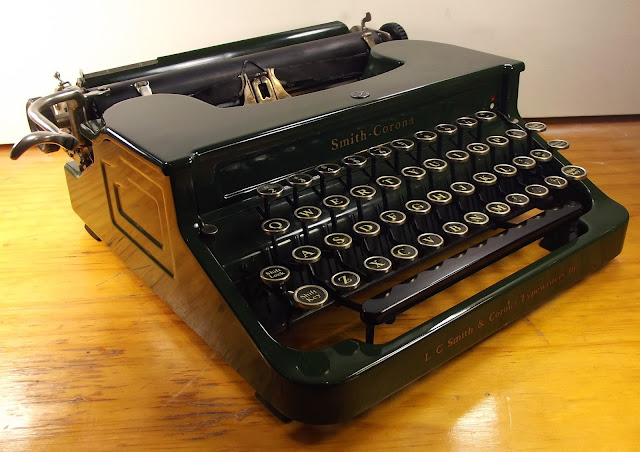 I've been sorting through typewriters, looking for some that I can sell in the coming weeks. I had shipped this green Corona in from the US a while back, knowing full well it had a problem, but thinking it was possibly something I could fix. But when it arrived I was mystified: the carriage moved as it should, and the space bar moved the carriage as it should, but none of the keys moved the carriage. The fact the paper didn't feed on to the platen properly seemed a minor issue by comparison. The Corona was packed back in its case, and for the time being put in the "too hard basket". 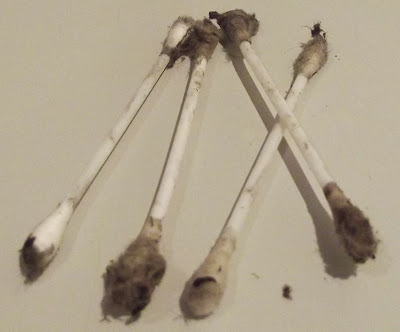 These cotton buds given an indication of some of the muck that came off the carriage
Today I decided to tackle it. I went for the carriage first, as the pristine outward appearance disguised an awful truth: under the carriage, and under the machine itself, was a filthy mess. There were signs of surface corrosion on the rails and masses of thick lint everywhere. But a word of warning - unless it is absolutely necessary, don't take the platen out of one of these models. It is one hell of a job to get it back in properly. 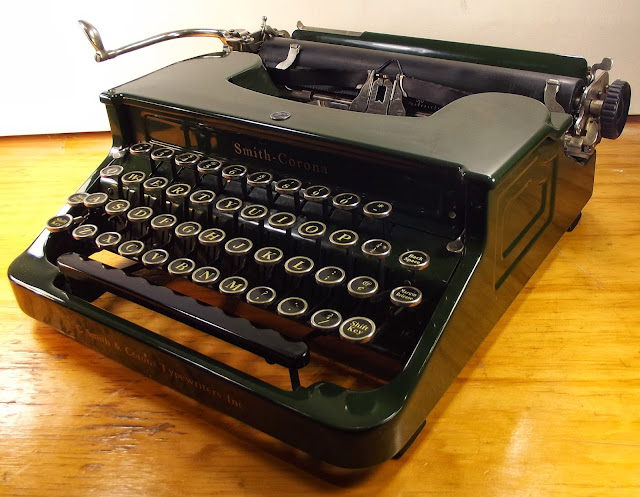 After having cleaned up the carriage and giving that a blow-through with the air compressor, I looked for what was causing the paper feeding problem. Pretty obvious, really: John Lavery told me earlier this year that it is a good idea to leave the carriage release lever forward when storing typewriters. On this one, the smaller, front feed roller had actually turned square from being pressed up against the platen over many years. It had hard, straight edges on it. I was able to smooth these off using steel wool. Also, the top, larger feed roller had been pushed out of position by corrosion in one of its grips. 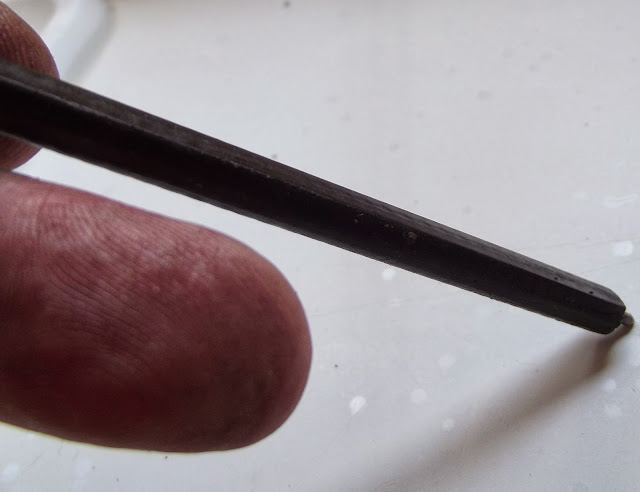 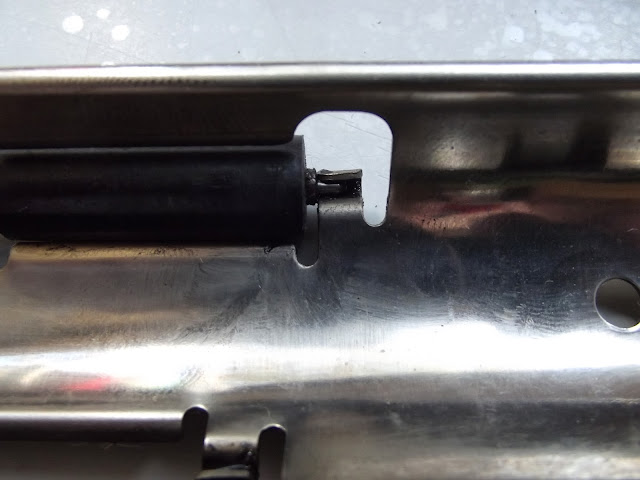 While I was at it, a smoothed off the pock marks on the platen, again using steel wool, fine sanding paper and Shellite to clean the surface.

Next I went poking and prodding to see what was stopping the Corona from typing. I had a burgundy version of the same model, so I was able to compare the mechanism on a working model with the green machine. With both typewriters sitting up on their backs, I worked my way down from the keyboard, triggering each device as I went. 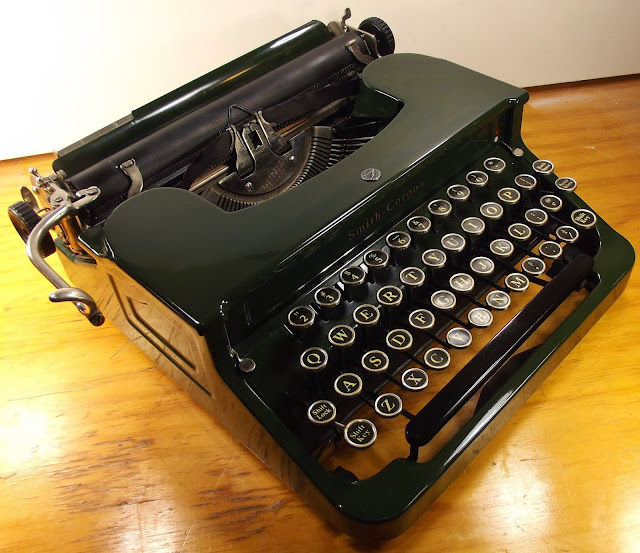 I first tested levers on either side of the keyboard. On one of them, a slight movement with the finger and the spring jumped out. As I moved on, the thought that this spring had become unattached so easily played on my mind. Had it stretched and become loose? So I thought I'd fix that first before going any further. I picked a replacement spring from my box of typewriter springs, felt that it had the same tension, and put that in place. 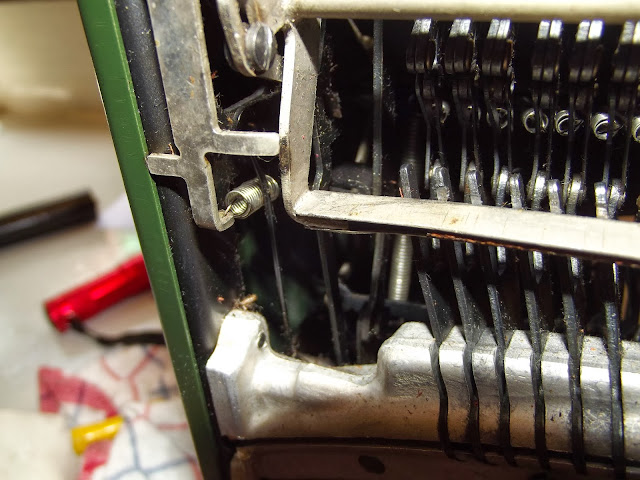 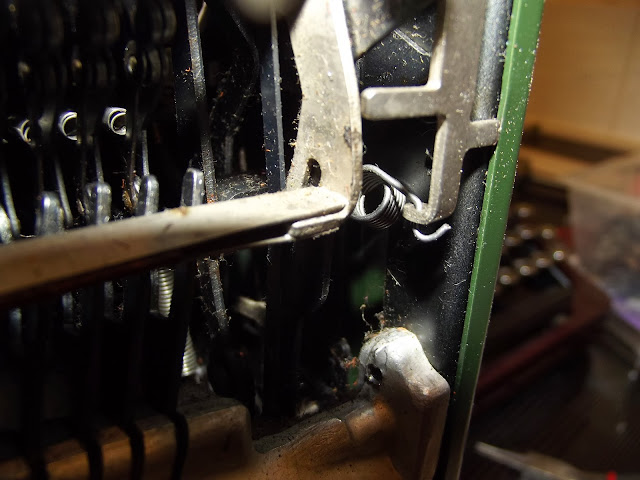 My substitute spring on the other side. It worked a treat!
Hey presto, the Corona started to work perfectly  I'd like to be able to claim my (non-existent) mechanical genius found the fault and corrected it - but I have to admit, it was a sheer, out-and-out fluke! 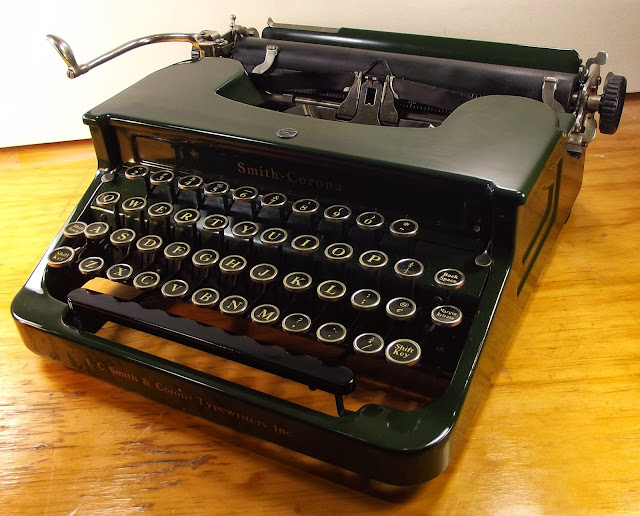 With the platen back in place, I now had a fully functioning typewriter - paper feeding on exactly as it should and keys moving the carriage as they must. Can't say I'm makin' it - more like I'm fakin' it. 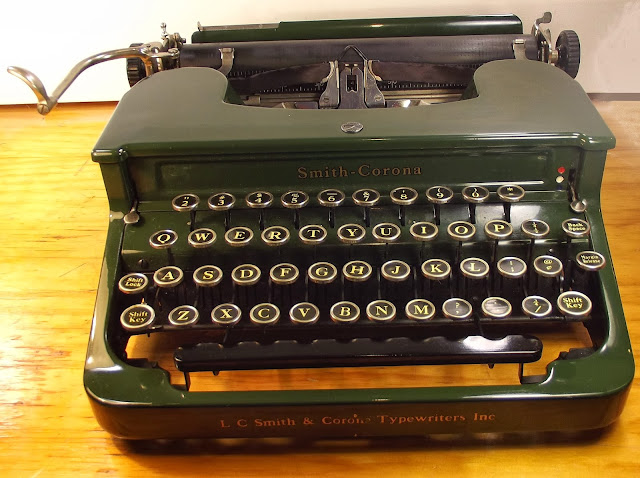 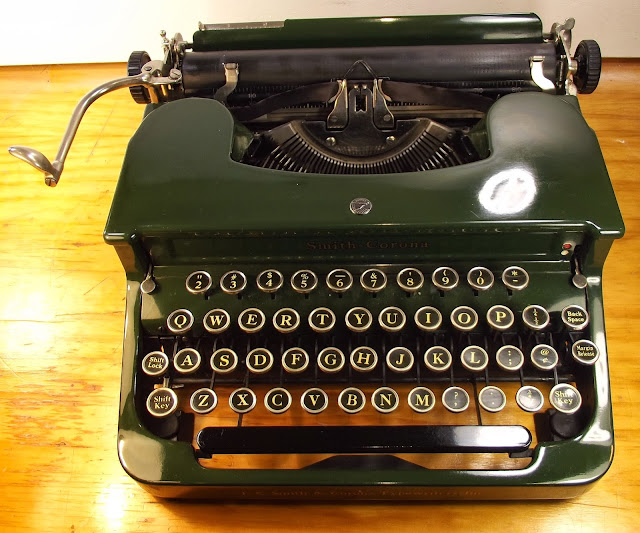 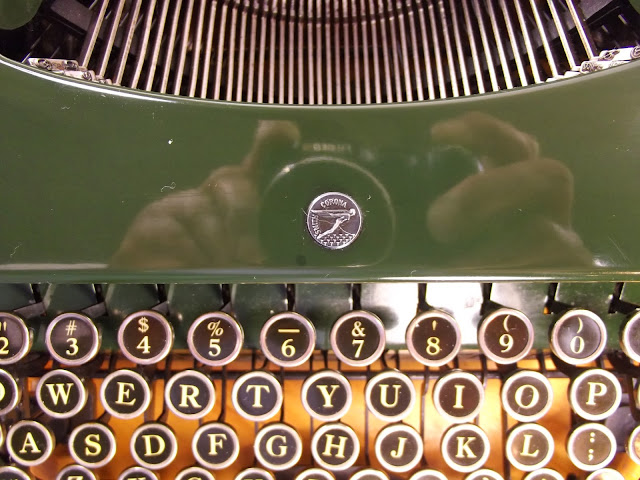 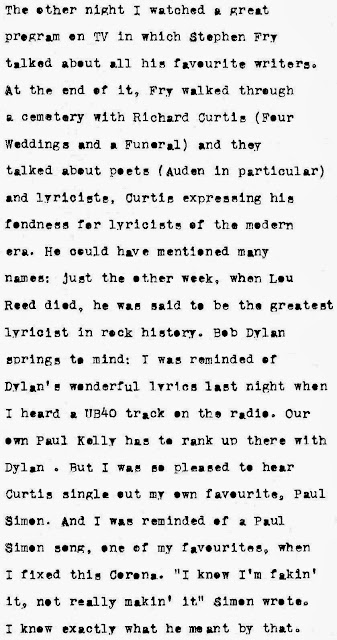 Posted by Robert Messenger at 01:05

I prefer to call that process "reverse engineering", though; but yeah, the feeling is the same. I just faked--- erm, reversed engineered a stubborn Olivetti Studio 45 yesterday. And I felt just as happy (and quite a bit smug!) when I was finally able to put it together again and it worked almost like it should!

The difference between 'knowing what you are doing' and 'looking like you know what you are doing' is purely down to who's watching. I found the same 'dumb luck' process worked when I was trying to fix my Graphika recently - but with a much smaller and already detached spring. I'd never even thought of sanding flat rollers back to round - I'm glad it worked because these Coronas are dynamite to type with.

That is a lovely machine - congratulations on restoring it to life. And thanks for passing on that tip from John Lavery to store typers with the paper release engaged to avoid flattening the feed rollers.

It is very satisfying to (finally) fix a problem just by tweaking one little part or adding a spring.

Now, please tell me more about platens on these typewriters. There's one that I'm fixing up for WordPlay. I remove the platen for cleaning and then got it platen back in, but the action is stiff and something is obviously amiss. What do I have to do to get the platen back in correctly?

Nice work. That is a great looking typewriter.

I find when I need to tweak stuff into working it is a bit more satisfying than straight-forward repairs and much better than repetitive unsolvable until total frustration problems.

Well Mr. Messenger, you are making it! Bravo on this repair, which certainly gives a lot of pride and pleasure. Nice moments in the life of a non-mechanic typewriter collector.