As I tried to get back to sleep at 2.34 this morning, my mind whirled with a persistent uneasiness, a sense of guilt that I had just broken the historian's golden rule. Had I been a witting party in propagating a myth?
Minutes earlier I had completed a half-hour interview with BBC Radio's Andy Martin on the subject of typewriters.
Some weeks ago, BBC Radio started planning a series of programmes to be broadcast in Britain at Christmas, to celebrate the anniversary of some of the most significant events in history. 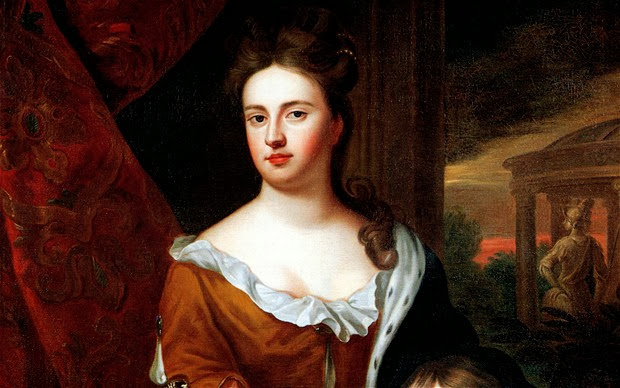 Queen Anne (1665-1714): Did she grant a patent for the first typewriter?
It will be 300 years next January 7 since a dying, immobile Queen Anne of England granted one Henry Mill a patent for "an artificial machine or method for the impressing or transcribing of letters, singly or progressively one after the other, as in writing, whereby all writings whatsoever may be engrossed on paper or parchment so neat and exact as not to be distinguished from print ... the impression being deeper and more lasting than any other writing, and not to be erased or counterfeited without manifest discovery."
Was this the first typewriter? Well, BBC Radio certainly thought it was. But its source was quite probably Wikipedia, which boldly states "Henry Mill (c 1683–1771) was an English inventor who patented the first typewriter in 1714 ... The machine that he invented appears, from the patent, to have been similar to a typewriter, but nothing further is known."
What Wikipedia does point us to is the first published reference to the Mill patent, which came in 1855 in Bennet Woodcroft's Reference Index of Patents of Invention, From 1617 to 1852. 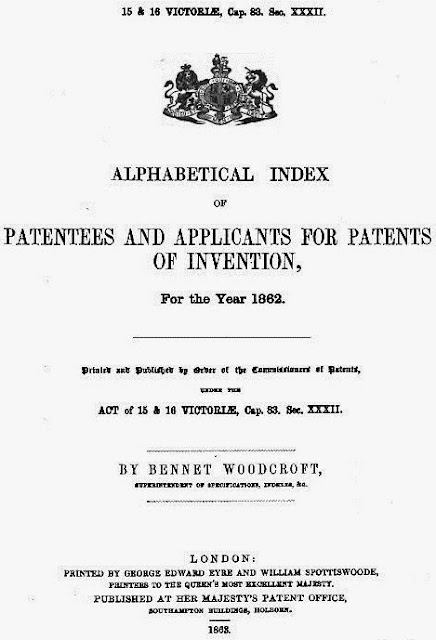 The 1863 edition
Perhaps the BBC was really waiting for me to offer some form of confirmation of the Mill claim. And I couldn't bring myself to do it, even for the Beeb. Still, as is always the way with such things, the mere suggestion of an 1714 English-invented typewriter will be sufficient for the vast majority of the BBC's audience to assume (and therefore take to their graves their belief) that it is true. Try convincing anyone that the first day of thanksgiving on the North American continent was not at Plymouth, or that The Great Chicago Fire of 1871 was not caused by Mrs O'Leary's cow kicking over a lantern.
As I waited for the BBC to ring me in Canberra at 2am (3pm Tuesday, Greenwich Mean Time), I brushed up on my research on Mill. All the while I hoped the impending interview with Andy Martin would not concentrate on Mill, or indeed set out to establish in the minds of listeners that Mill had invented the first typewriter. But of course, at least in the initial stages, it did.
I should have dismissed it out of hand, but I failed to do so. Rather than cause any confusion, I merely used Mill as a starting point, to lead on to Pellegrino Turri di Castelnuovo and, eventually, 104 patents after Mill, to Christopher Latham Sholes. 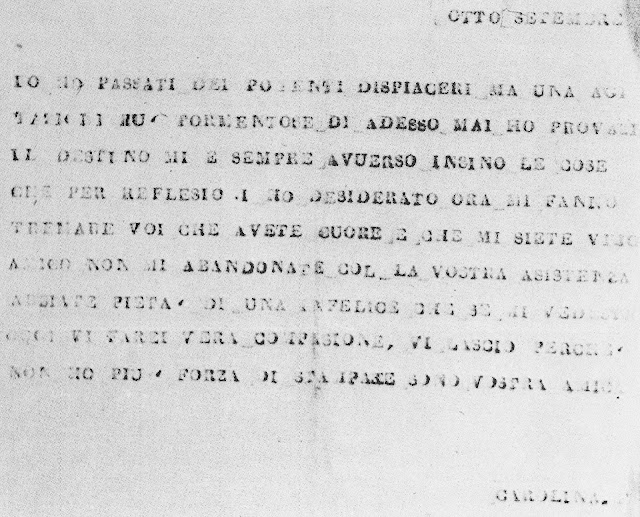 Work from Turri's machine
Avoiding confusion is really what this problem is all about. At the turn of the last century, when historians first began to research and write about the development of the typewriter, it was convenient for them to label early patents, such as the one issued to Mill, as describing "typewriters". The term didn't exist before 1867. Taking in all the 105 patents from Mill to Sholes, if one word is at all common it is "typographer". Many relate to the printing industry.
As I did quickly point out to Andy Martin last night, there has never been any evidence that Mill actually built a machine. All that exists is the wording of the patent; no model or prototype was required to support the application to the court of Queen Anne. If Mill did build what he described, no trace of it has ever been found. 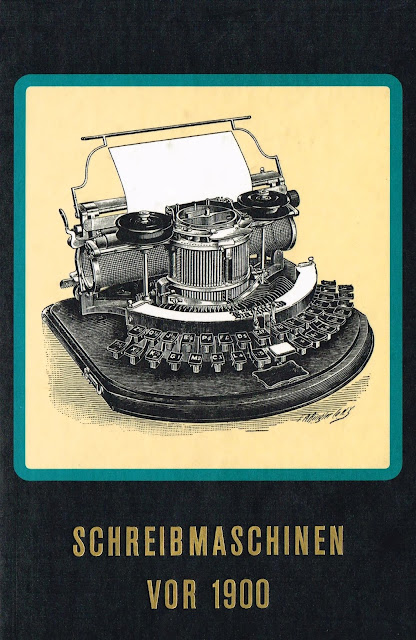 So how did the myth of Mill's "first typewriter" originate? Mill was mentioned (though as "Henry HILL") in the second paragraph of the introduction to Friedrich Müller's 1900 Schreibmaschinre und Schriften-Vervielfältigung, which, as far as I know, was the first general typewriter history book published. "Die Engländer machen geltend, dass nach ihren Patentlisten bereits im Jahre 1714 Henry Hill ein Patent auf eine Schreibmaschine nahm, deren Bauart sich aber nicht mehr ermitteln lässt." George Carl Mares suggested in 1907 that Mill had been mentioned the two Cantor Lectures on Typewriting Machines presented to the Royal Society of Arts in London in 1894 by Henry Charles Jenkins (1862-1937; Associate Membership of the Institution of Civil Engineers). This was confirmed in 1928:

The idea of an 1714 "typewriter" was all-too-willingly taken up Müller, Budan (1902 and 1911), Benedict (1903), Mares and Oden (1917). It persisted through to Martin (1949), by which time it had become entrenched in the minds of typewriter historians.
Yet to date the evolution of the typewriter from 1714 is, I would suggest, wishful British (and all typewriter lovers') thinking. In reality, the typewriter invented by Christopher Latham Sholes had no real precedents at all. Sholes only became aware of the Pratt Pterotype in July 1867, some months after he had started thinking about a mechanical writer, and the Pratt machine clearly had no influence on Sholes. For one thing, it employed a single type element, the 1867 patent for which was sold to Hammond. 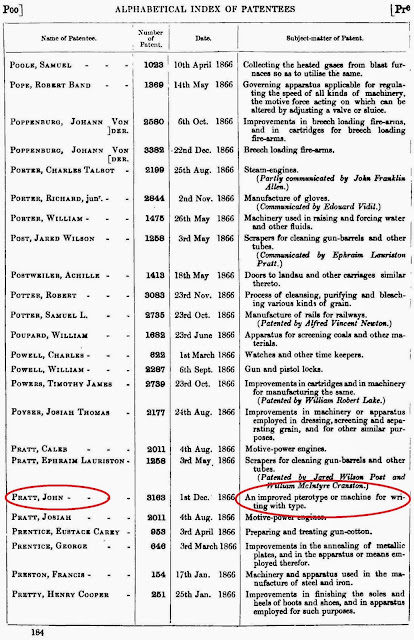 From Woodcroft's 1867 edition
What eventually emerged from Sholes's work was something closely approximating what we today would think of as a "conventional typewriter" - that is, one with a carriage and platen, a typebasket and a keyboard. It would be drawing a very long bow indeed to suggest anything which preceded the Sholes machine had any real impact on its development. Patent royalties were paid to Charles Ames Washburn, but Sholes was unaware of Washburn's carriage patent when he invented the typewriter.
History shows that in Britain and the United States in the latter part of the 19th century, there was a general tendency to cement the notion that anything "new" had a long and involved background, steeping it in British or American traditions. The socio-political reasons for this are complicated, and I won't bother with them here. Suffice to say it was unacceptable to think of "inventions" as coming from an absolutely standing start - which, in fact, they so often did.
The typewriter falls into this category. It is nice to think that the typewriter emerged from 160 years of evolution, of worldwide links and international cooperation, of developmental work in England, Italy, the US, France, Germany, Austria, Russia, Brazil and Denmark. The truth is, it did not. English typewriter collector and historian Wilf Beeching - who took things even further back, to 1647 - barely contained his enthusiasm for British typewriter inventions long enough to point out in his Century of a Typewriter that one needs to be careful about how one interprets a patent description: 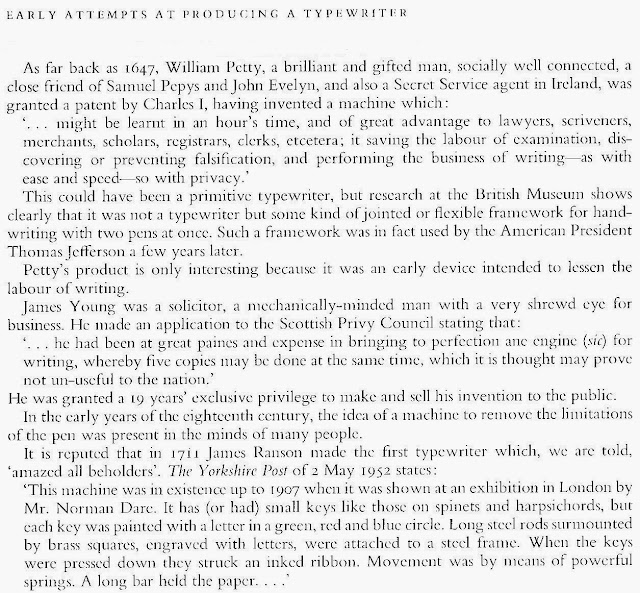 If I had wanted to be pedantic about this in my interview, I could easily have been so. There is no absolute certainly, for example, that the Henry Mill granted the 1714 patent by Queen Anne was the same Henry Mill who was associated with the New River Company.

Richard Bissell Prosser's entry on Mill in the (British) Dictionary of National Biography, 1885-1900, Volume 37, outlines what is known about the Henry Mill who was an engineer to the New River Company, but says, "It is probable that he was identical with the Henry Mill who in 1706 obtained a patent (No 376) for an improvement in carriage springs, and also in 1714 another patent (No 395) for an apparatus ‘for impressing or transcribing of letters singly or progressively one after another, so neat and exact as not to be distinguished from print, very useful in settlements and public records.’ The patent contains no description of the apparatus, but it has always been regarded as the first proposal for a type-writer.
"The engineer's epitaph sets forth that ‘his capacity [was] excellent in … all the branches of the mathematicks, and other liberal sciences', and in his will, proved 6 April 1771 ... he mentions his ‘private fancied toys’, a phrase which might well include models of his inventions. The obituary notice in the Gentleman's Magazine states that he erected waterworks at Northampton, and that he received the freedom of the borough in recognition of his services, but there was no regular water supply at Northampton until the present century, and the municipal records of the town show that in 1722 Henry Mill obtained his freedom by purchase. He was employed by Sir Robert Walpole to carry out the water supply for Houghton Hall, and a well sunk by him is still in use ...
"Mill died unmarried at his house in the Strand on 26 December 1771, and he was buried in Breamore Church, near Salisbury, where there is a long epitaph to his memory. The epitaph states that he was ‘aged eighty-seven’, but he is entered in the parish register as ‘aged 88 years'."
The records of the New River Company were destroyed in a fire.
It's certainly a romantic notion that the development of the typewriter dates back to 1714, to the court of Queen Anne. But do we really need to stretch credulity to such an extent in order to celebrate the glory of the typewriter? I don't think so.
Posted by Robert Messenger at 14:29

Sounds like the Gutenberg printing press is not significant (or British) enough!

I think Gutenberg's turn comes around in another 26 years?

Ah, the key word "anniversary" failed to sink in! :)

It's funny how this invention story parallels that of the bicycle, what with von Drais, MacMillan, Michaux, and Lallement. There is even de Sivrac (and L. da Vinci?) to correspond to Henry Mill.

They are similar human-scale machines, of course, that can be put together in small workshops without requiring much recordkeeping, at least in the early stages (which is what you're talking about) and as contrasted with steamships and railroads. I suppose there are many inventions from that era in the same predicament.

And yet it is puzzling that from such a creative and literate time, the second half of the 19th century, not that long ago, the records that have survived are so incomplete that today we end up with controversies like these.

So, Robert, I just cannot imagine how you find the time to produce such deep investigations so frequently, and then write them up so gracefully. But keep it up; we love it!

Thank you for your kind words Michael.
No worries SK, I thought that might have been the case. But we should always remember that without Gutenberg we wouldn't have QWERTY. By the way, I love your blog, great work!

I think it is interesting the way that some people put special significance on anniversaries ending in a five or a zero and equally odd that they might expect to find a single hand behind significant inventions. As well as the typewriter, there's the humble bike (let's not forget Starley), radio communications, the atomic bomb, photography and steam power to consider. To list just a few. None sprung even part-formed from a single mind and invariably you'll find footprints of giants on other giants' shoulders.

Patents are funny things. You can actually patent an idea or concept, not just a structure. All the person would have had to have done, is recognize a need or a design idea - without the direct mechanical needs to be able to achieve the end result. As such Mill would have not even had to have designed a machine that could achieve this outcome to be awarded the patent.

Look at the disaster around the patent related to "Update button". The people that took out the patent never invented a thing.

I don't know how you dig up all this information, but I sure am glad that you do and then you post it for all.
This is a wonderful post. Thank you for all your work.