On the Cover of the Typewriter Exchange 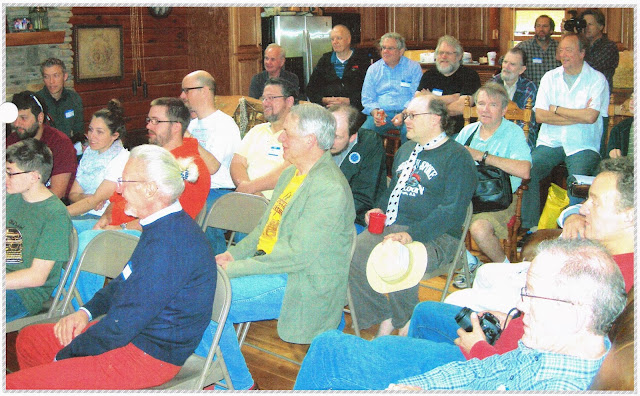 Mike Brown's photo which appeared on the cover of the latest Typewriter Exchange. I have captioned it below. Click on this second, smaller image to enlarge it and read the captions: 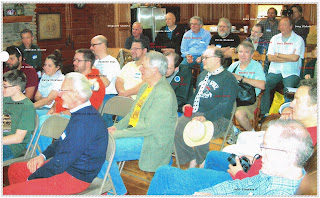 Well, we're typewriter fidgets
We got golden digits
And we're loved wherever we go
We type about beauty
And we type about truth
At 45 members a show
We've got every typer
That can get us kinda hyper
But the thrill that we'll never change
Is the thrill that'll getcha
When you get your picture
On the cover of the Typewriter Exchange
- with apologies to Shel Silverstein, Dr Hook & the Medicine Show, and to Rolling Stone
The 153rd Melbourne Cup will be run over two miles tomorrow at the Flemington racecourse. The richest handicap race in the world (now with $6.2 million in prizemoney) is traditionally held each year on the first Tuesday in November, and is said to be "the race that stops a nation".
Melbourne Cup day was a huge one for me last year. Just days after retiring after 47 years in print newspapers,  I backed the race winner (Green Moon) and received three magnificent typewriters, all within a matter of a few hours. I labelled it my "My Great Green Day". 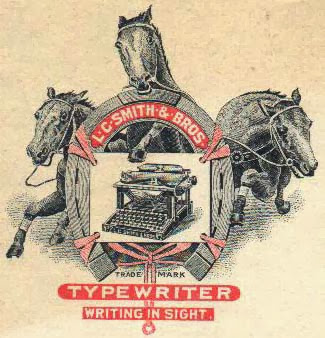 All my green omens pointed to Green Moon as the horse to back, and after son Danny and I had put our bets on at the local totalisator agency, a Corona Streamliner, an Orel (Czech Adler 7), and wrapped in lots of green tape, a Hammond Multiplex all turned up in short order.
So how are the omens looking for this year? 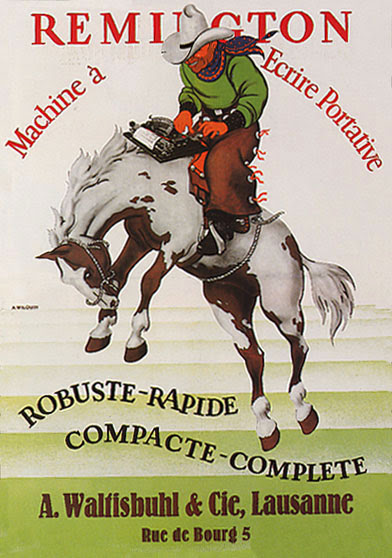 Well, it's still 21 hours from the race, but already things are shaping up brilliantly. Today in the mail I received the latest edition of Mike Brown's Typewriter Exchange, and found I'd made the cover! (Wearing a green jacket!) Dr Hook got a thrill to make the cover of the Rolling Stone, in March 1973, and I can assure you mine was every bit as great.
Mike Brown has got this great issue out in super quick time, so that even a subscriber in Australia can read it while the memories are still very fresh. His coverage of Herman Price's Typewriter Collectors' Gathering at the Chestnut Ridge Typewriter Museum in West Virginia is first-rate, brilliant. Mike's old journalist friend Jack Knarr (who sadly couldn't make the meeting) will be proud of him. Jack will feel like he was there after reading this edition of Typewriter Exchange. 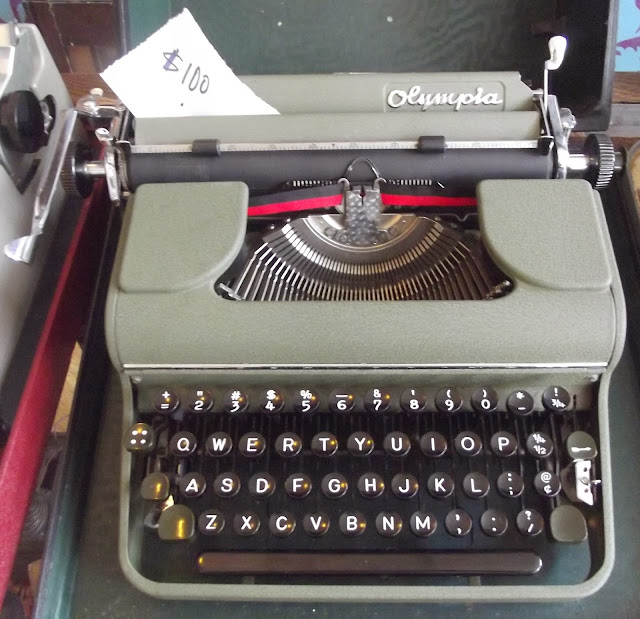 Just moments after the Typewriter Exchange arrived, there was a knock on the door and there was the Australia Post delivery man with a large box - from Cincinnati! Yes, in it, wonderfully packed and very safe and secure, was the green Olympia SM1 I bought at WordPlay last month. Richard Polt had sent it on to me, and did a wonderful job of it in the process. Thank you so much, Richard. 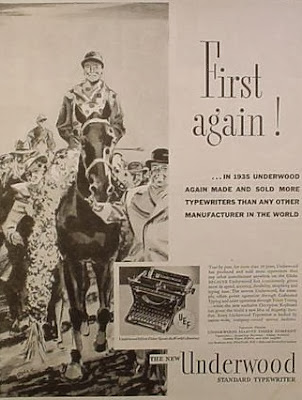 I guess with that sort of luck going my way today, I am yet again going to experience every Australian's biggest thrill on Melbourne Cup day tomorrow - that is, to back the winner.
But it may not be Green Moon this year. Green Moon is among the 24 starters once more, but only five horses have won consecutive Melbourne Cups in 152 races - and Green Moon has this year been saddled with an extra 3kg in weight.
Which leaves: 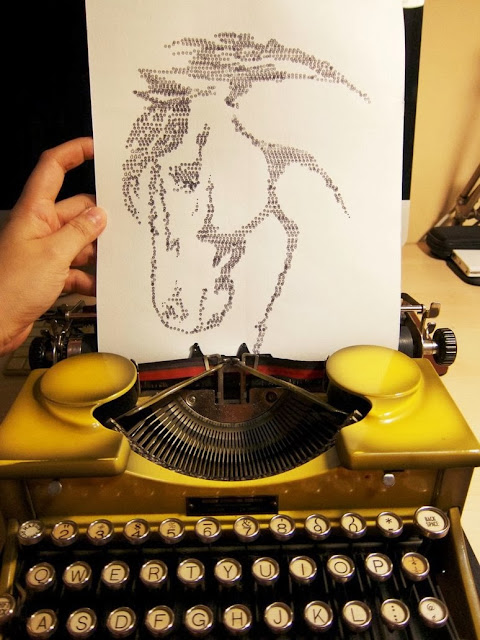 Image and artwork by Singapore blogger "dreamstone" (Jennifer).
Royal Empire: It has TWO typewriter names, but for all its credentials, it is raced by the Godolphin team, which has failed to win the cup in 15 annual raids. 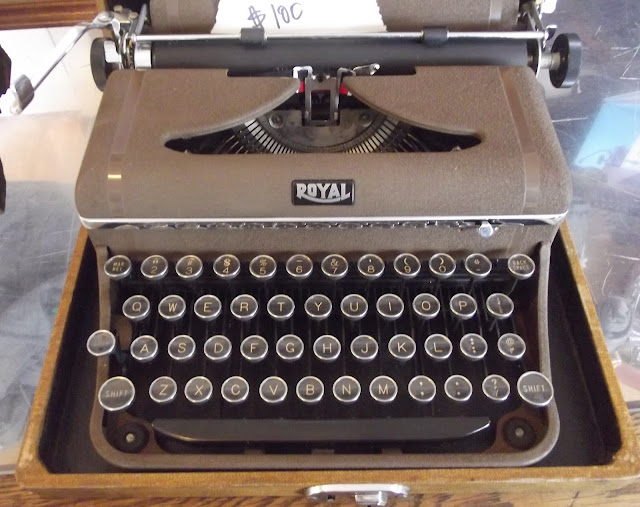 Brown Panther: Now that's what I'm tempted to call the lovely brown Royal Companion portable I bought back with me from WordPlay in Cincinnati. Plus this horse was bred and is part-owned by former England soccer star Michael Owen (Liverpool).
Tres Blue: Well, that's how I still feel, as a result of the "let down" after the super highs of West Virginia and Cincinnati.
Sea Moon: Looks pretty handy and at least is "half a Green Moon".
Seville: My favourite city, and a horse that is well fancied.
But I don't think I can go past Royal Empire. Or, given the typewriter connection, Royal Empire and Brown Panther in a quinella wager. Lady Wonder, the late-1920s "talking horse" which used a "giant typewriter" to give answers to simple questions. The horse was based in Richmond, Virginia. Police, no doubt "in" on the ruse, claimed the horse answered questions leading them to missing children. Parapsychologists Joseph Banks Rhine, his wife Louisa Rhine and William McDougall were reported to have "tested" Lady Wonder in 1927 and 1928 "and concluded the horse had telepathic ability". 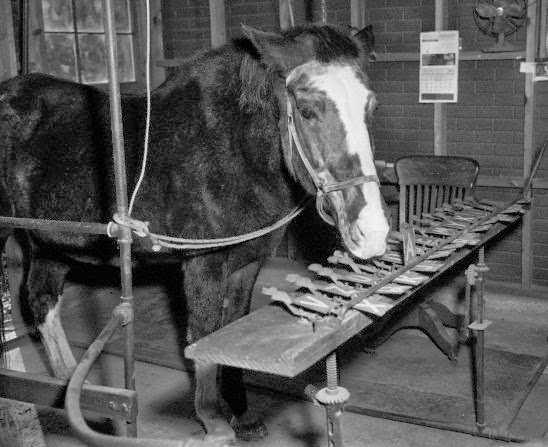 Typewriters were a necessary tool of trade for racing writers more than most journalists. Here is a 1946 image of a Swiss reporter typing up the day's results after a race meeting on the Ober See, a frozen lake in Arosa: 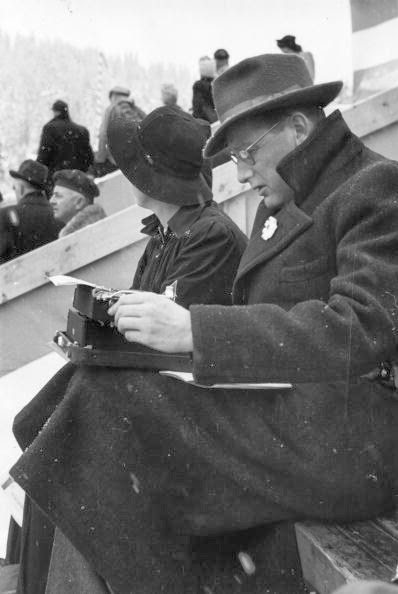 A "Day at the Races" for Washington Post racing writer Walter Haight, who gets a tip "from the horse's mouth" and shares a joke with a starter at Delaware Park racetrack in 1964: 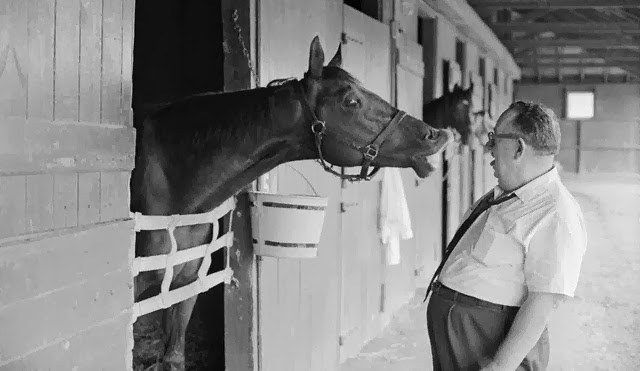 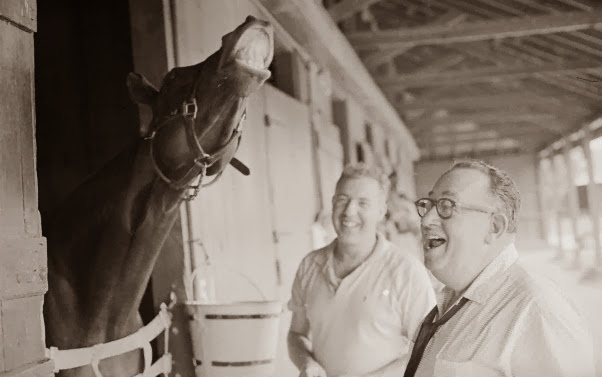 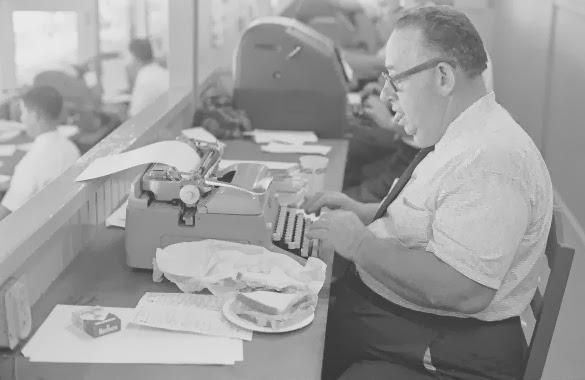 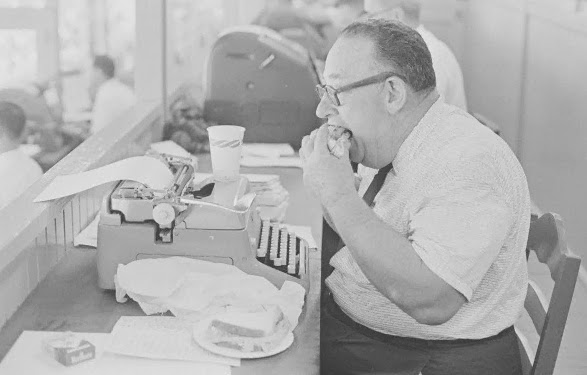 Richard Polt mentioned not so long ago, I think, that there was a horse racing in the Caribbean called Typewriter. There was also a harness racing horse called Typewriter doing well at tracks around Auckland in New Zealand between 1902-1909: 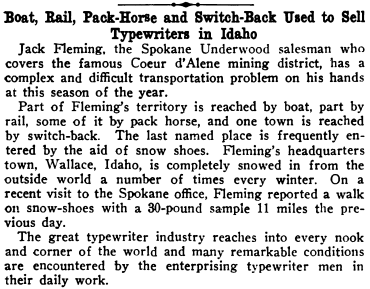 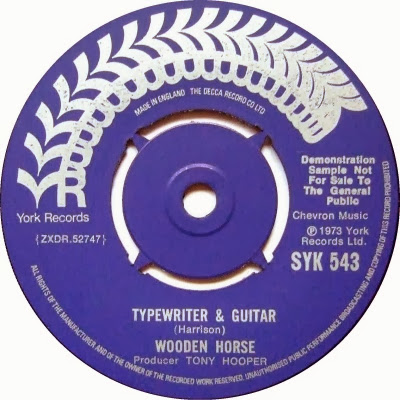 Posted by Robert Messenger at 19:30

Those are very nice typewriters from WordPlay.
Thanks for the group photo from the gathering.
Hope you have a great time at the Melbourne Cup.

I'm glad that the Olympia arrived safely. Enjoy it as a souvenir of your time here!