International Women's Day II: When The Bosses Typed for the Secretaries 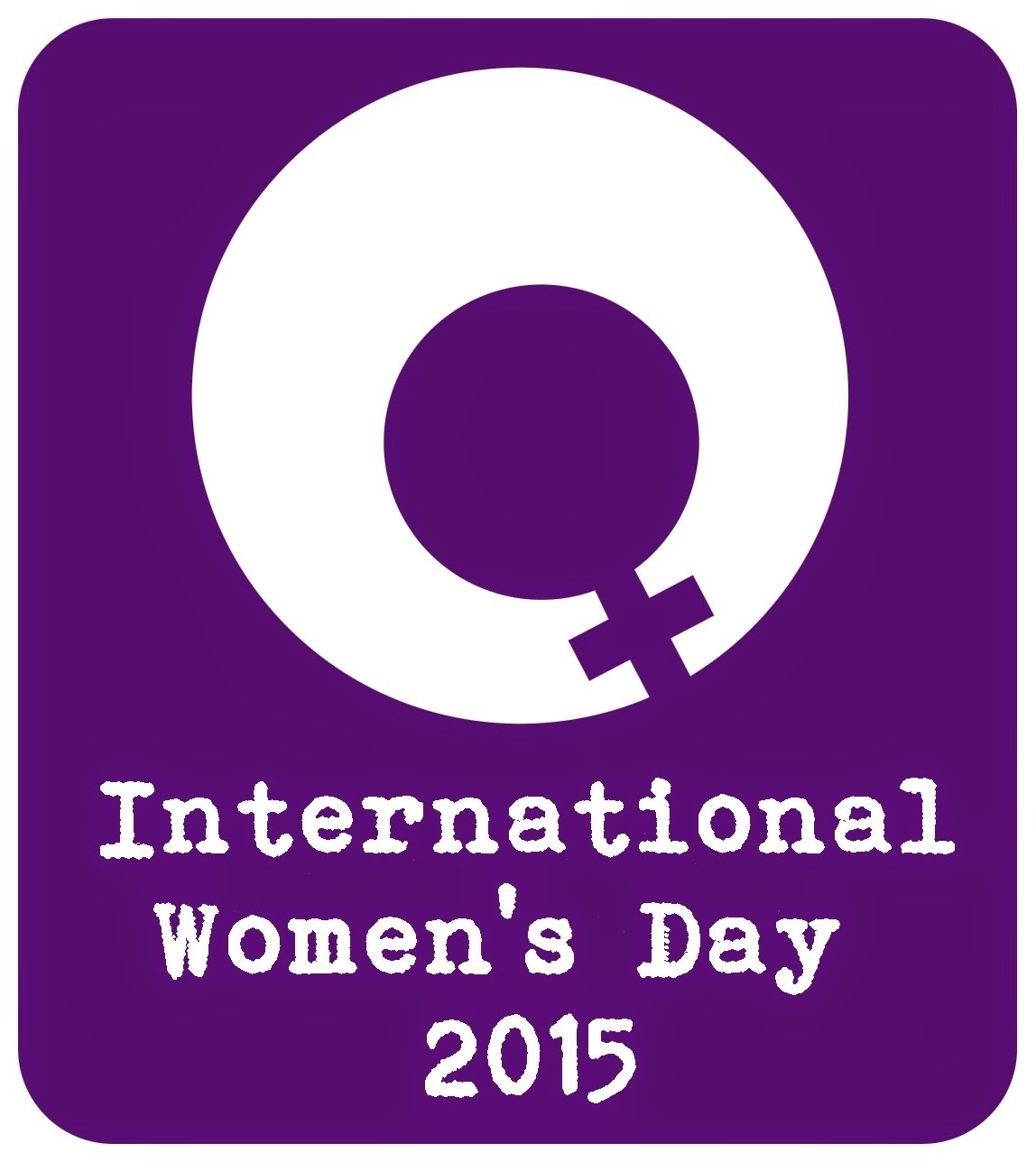 In its March 9, 1959, edition, LIFE magazine covered an unusual event which "turned the tables", as it were. It was the "Bosses Typing Contest" at the Denver Chapter of the National Secretaries' Association's 11th annual "executive's night" dinner party, given by 215 members for their bosses at the Brown Palace Hotel. This series of photographs was taken for LIFE by Hikaru Carl Iwasaki. Secretaries dictated letters to five executives (who had won "door prizes"), and the bosses had 10 minutes to attempt to transcribe the letters on Underwood Golden Touch Documentor electric typewriters. "Why don't we sit on their laps?" asked Robert Downing, who still got to collect the winner's prize, despite his sexist remark.

And the winner is, Robert Downing ... 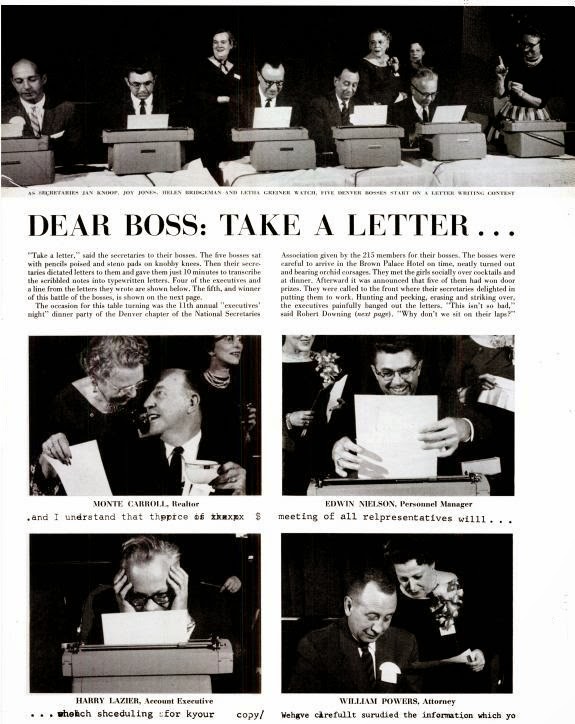 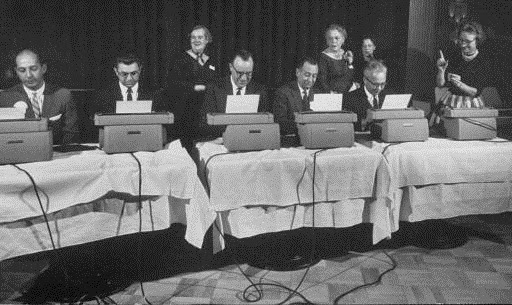 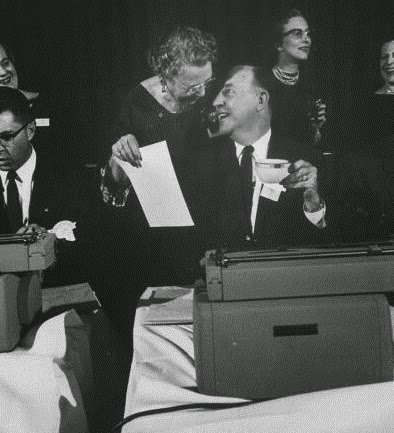 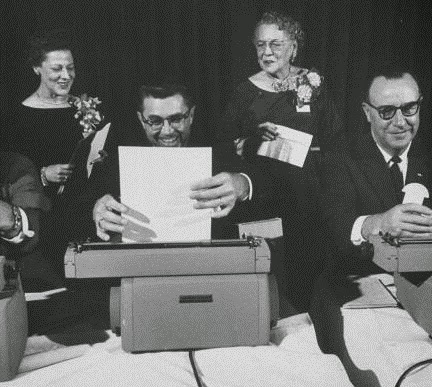 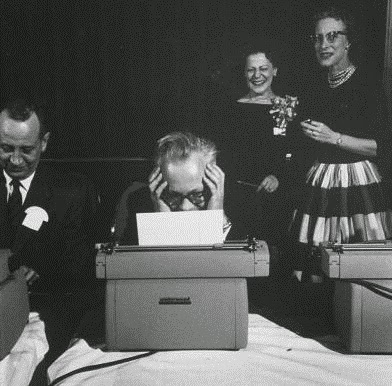 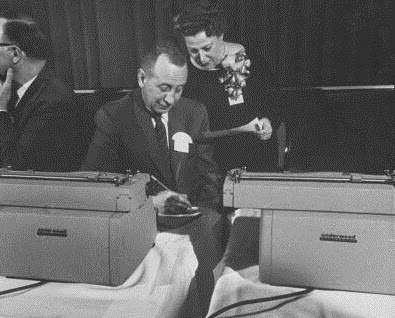 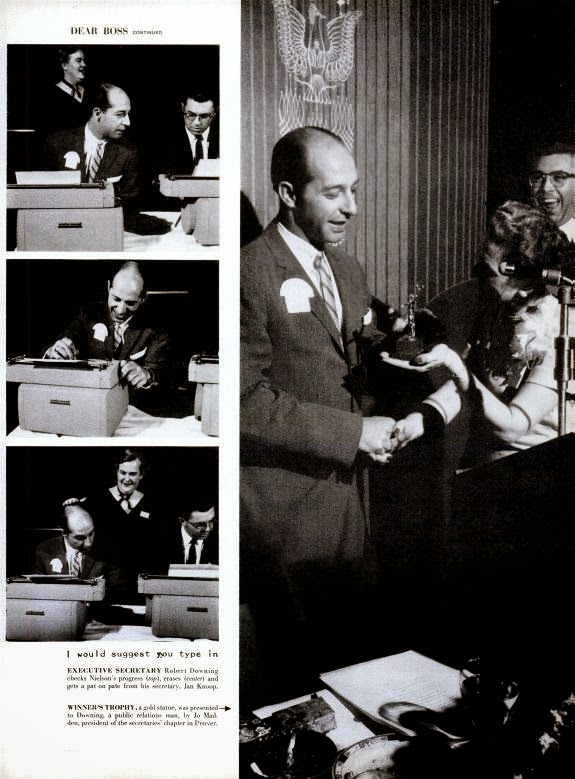 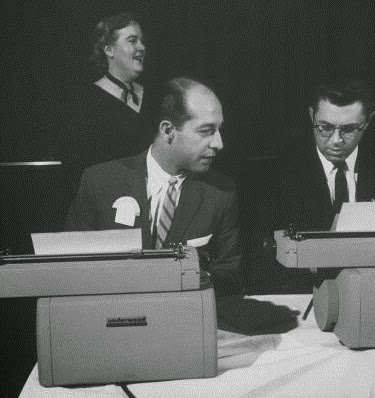 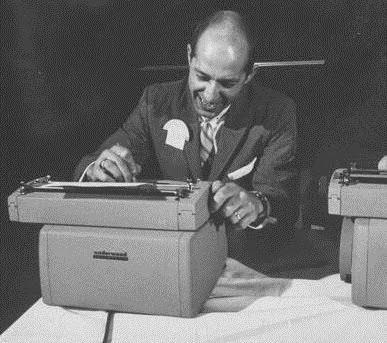 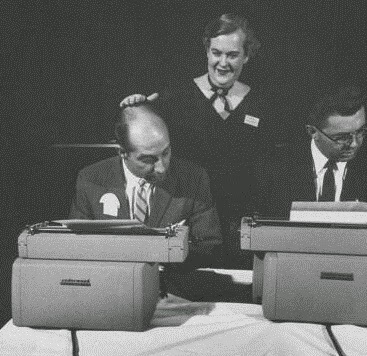 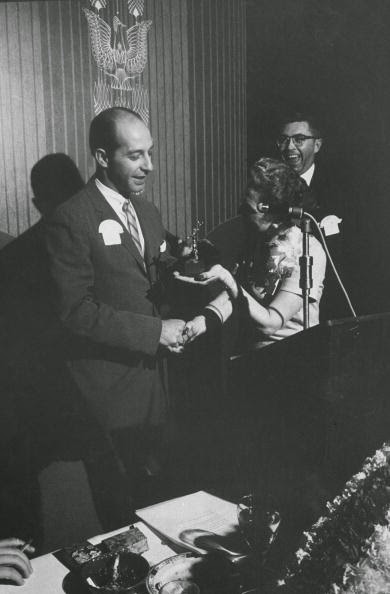 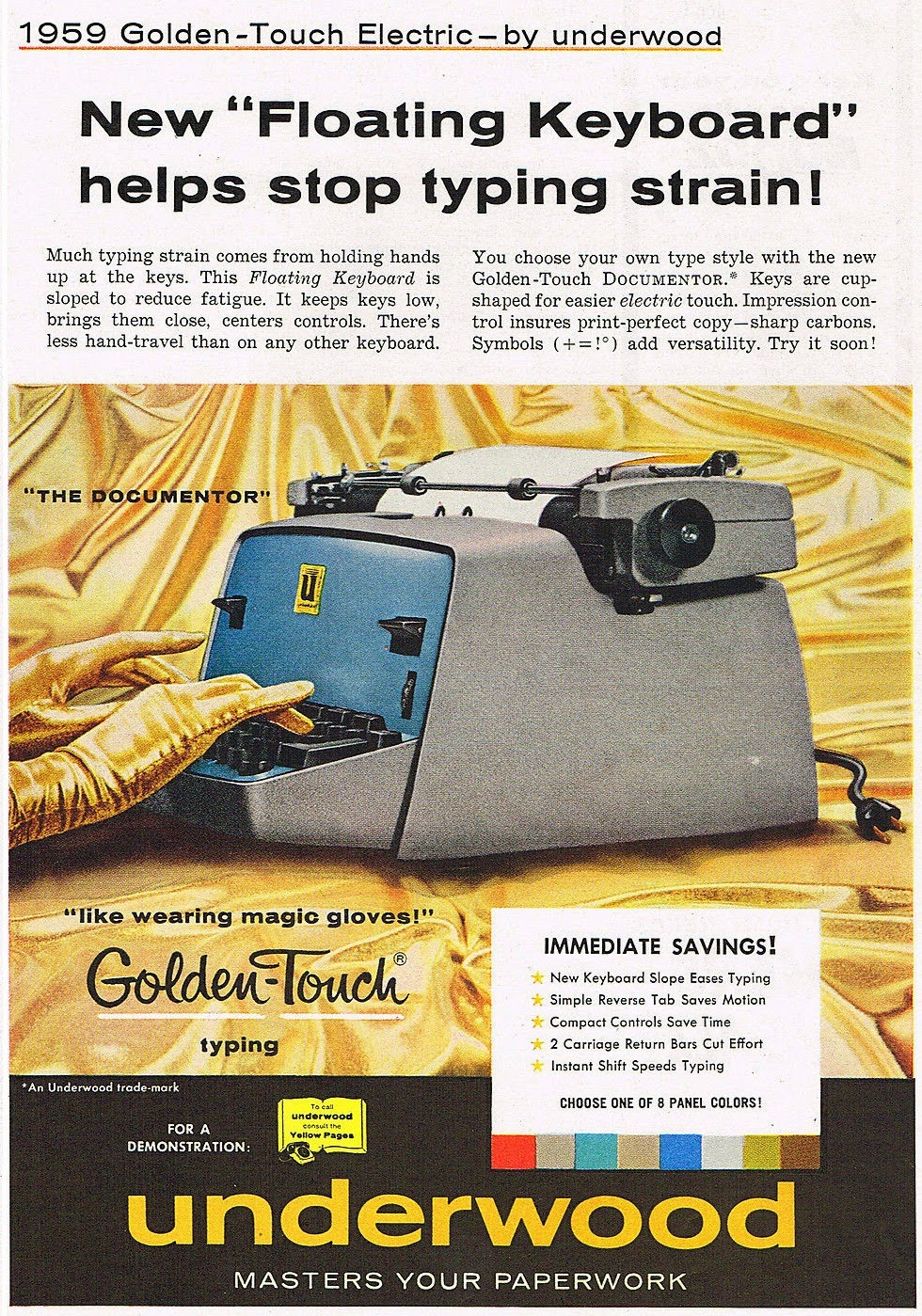 Another typewriter-related photo by Iwasaki, from 1945, shows US Army corporal Minoru Yoshida of Honolulu, hospitalised at the Dibble General Hospital, Menlo Park, California, talking with Mrs Jack Epstein, a member of the public relations staff of the hospital. 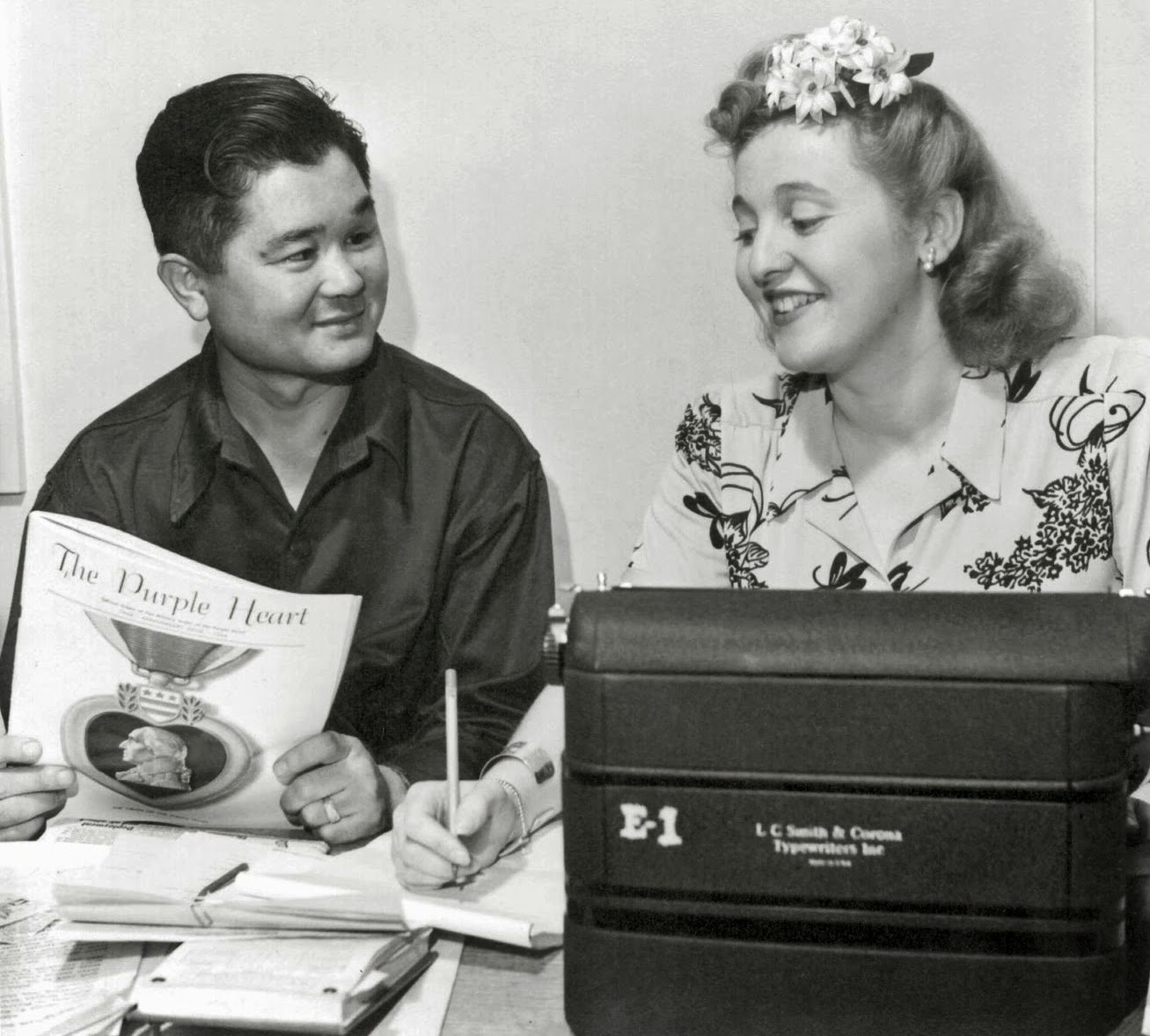 Haha, I believe bosses still feel like this today! Not with typing but some of the other tasks you have as a secretary. "How in the world... did you get that fixed?" Lucky for me, otherwise I'm out of a job.

Funny! Reminds me of the classic sitcom plot in which husband and wife trade tasks for a day. Of course, the moral is "to each his/her own" ... and the woman's "own" is the subservient position.

The other photo makes me wonder what it was like to be a Japanese-American serviceman in World War II. Uncomfortable, I bet.

Good points here, Spider and Richard.
The typing is SO bad I wondered whether it was deliberately so, to make some sort of point? The ability to type well is clearly not a gender issue.
Modern feminism was the subject of fierce debate on Q & A on Australian TV last night and it's clear that the day when a group of female bosses put male underlings to the test in this sort of jocular fashion ("you're not 'meant' to be doing this sort of work") is still a way off.

Great blog. i send you an email on oz.typewriter@gmail.com. I hope you get it. And I am looking forward for your answer.
Tomas Hucik