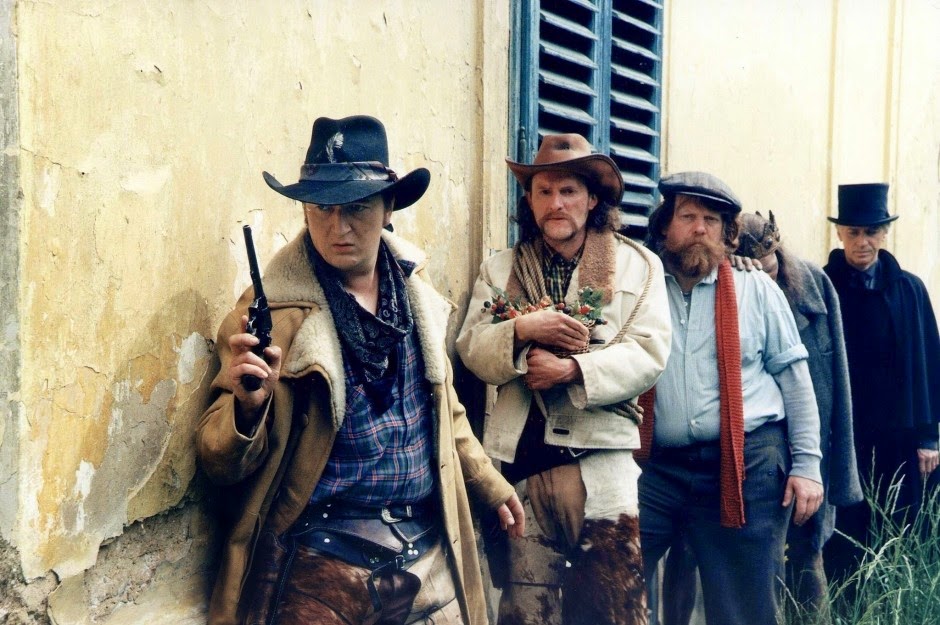 Dermot Trellis, as depicted in Kurt Palm's movie version of Flann O'Brien's sublime novel At Swim-Two-Birds. Trellis takes his name from a makeshift typewriter table. I've not seen this film, but I guess it's possibly as successful an attempt to translate a complex novel on to celluloid as Joseph Strick's movie version of James Joyce's Ulysses, which I watched transfixed as part of a sexually segregated audience (males one night, females the next) on August 17, 1967. 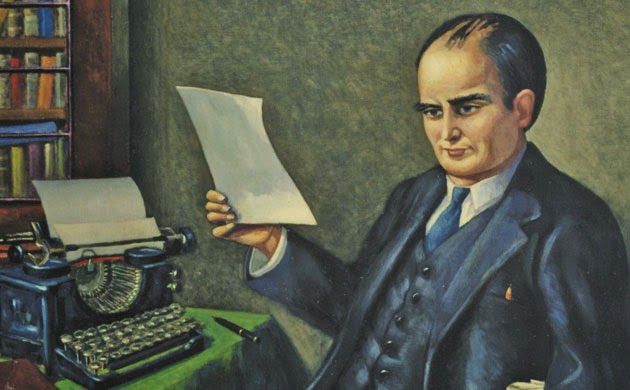 These paintings of Flann O'Brien were made by his younger brother Micheál Ó Nualláin. The 1917 Underwood 3 O'Brien used may not look it here, but it has a 14-inch wide carriage. 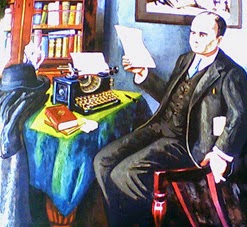 O'Brien's typewriter can be seen below, with other items (fedora, violin, passport, diary, hand lens and fountain pen) which had belonged to the author, and which since 1997 have formed the O'Brien collection held by the Boston College. The college's Irish Collection at the John J. Burns Library of Rare Books and Special Collections also houses the works of poet William Butler Yeats and playwright Samuel Beckett. The O'Brien collection includes 14,000 pages of typed manuscripts, extensive correspondence (including a 1953 letter from O'Brien to Underwood Business Machines about repairs to his typewriter) and a library of more than 500 books. It contains various personal effects, among them his desk and typewriter and a life-size portrait of the writer painted by his brother Micheál Ó Nualláin, who assembled the collection. 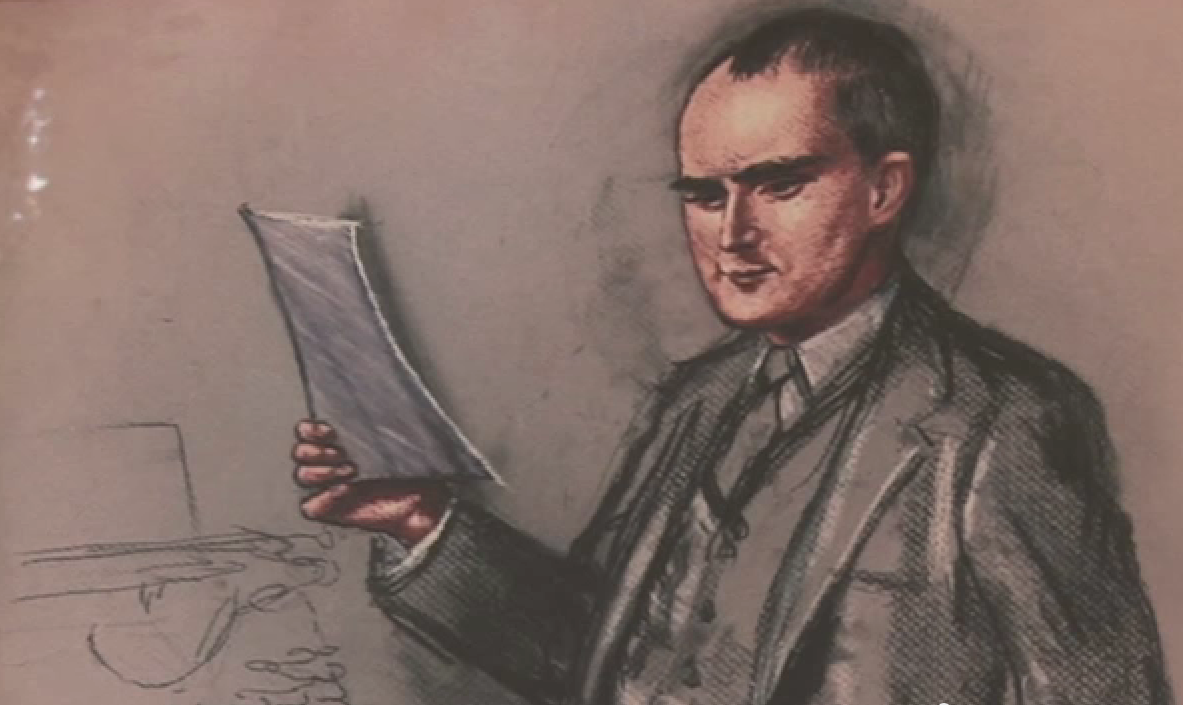 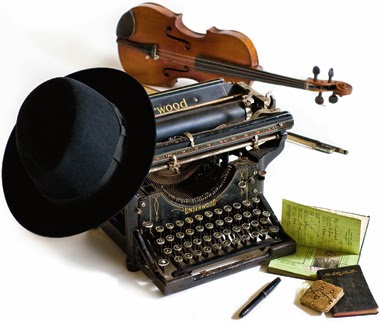 On this, St Patrick's Day, it is opportune to salute arguably the greatest novel ever typewritten, Flann O'Brien's At Swim-Two-Birds. I know I've never read a finer work of fiction, and doubt I ever will. (Although, it might be pointed out, when The Times Literary Supplement reviewed the book among its "Novels of the Week" the day after St Patrick's Day in 1939, it said, "Mr Flann O’Brien will hardly be surprised if a reviewer is at a loss how to describe this book of his. No doubt it is to be described as fiction, though perhaps nothing would be lost if it is not.” 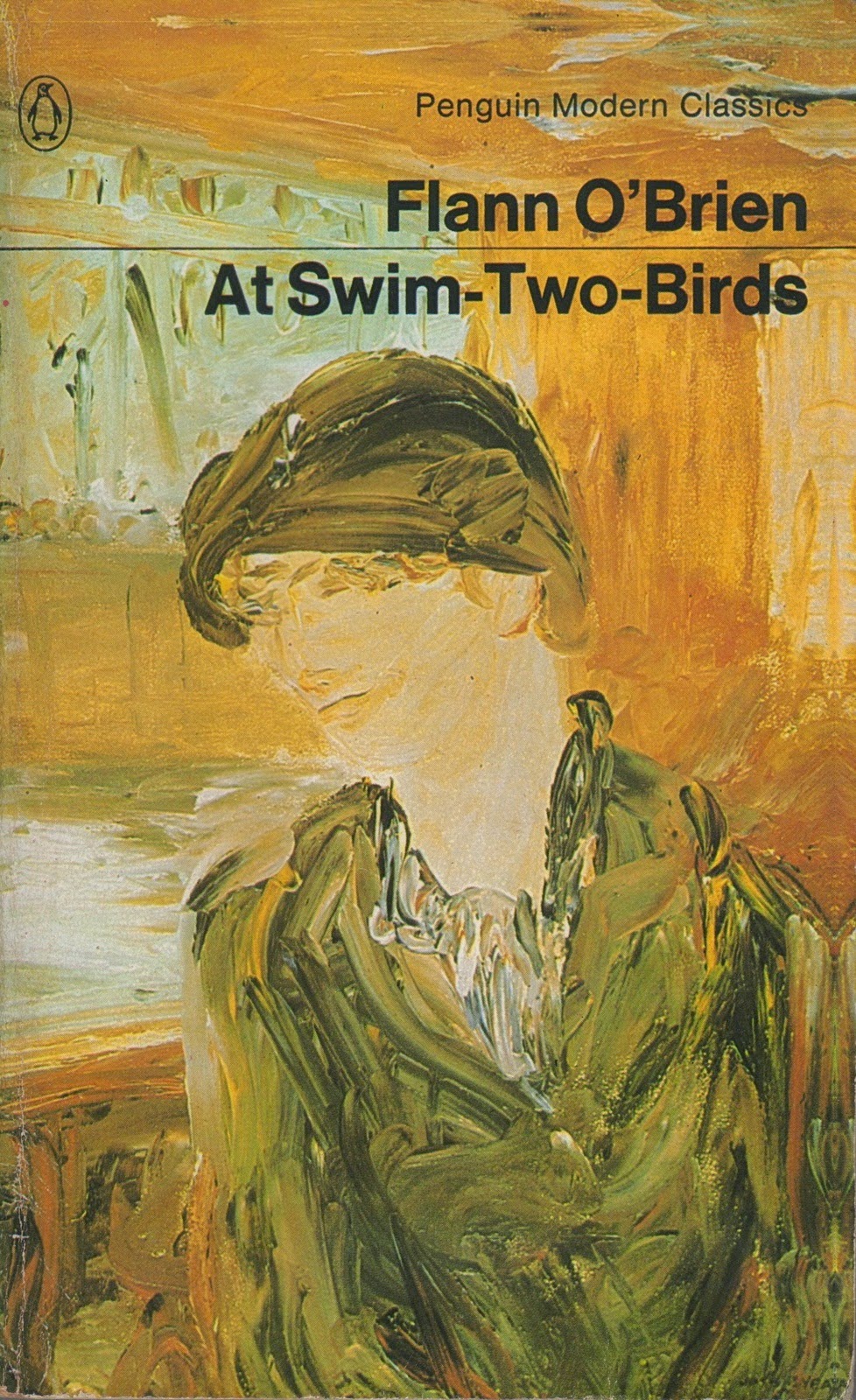 Google used this doodle to mark what would have been Flann O'Brien's 101st birthday, on October 5, 2012. The illustration depicts the saw, hammer and nails presumably used by O'Brien to make his trellis typewriter table. However, the illustration makes the common mistake of assuming O'Brien used a portable typewriter. His typewriter was, in fact, a 1917 Underwood Standard 3 (serial number 178622) with a 14-inch carriage.
The lead character in At Swim-Two-Birds is Dermot Trellis, a grumpy and cynical writer of  Westerns who is the eventual antagonist of the novel, the target for all of the other characters’ vengeance. Trellis was given his name by the author after a table he constructed from the offcuts of a modified trellis that had stood in his family's back garden at 4 Avoca Terrace, Blackrock, Dublin.
While working during the day as a civil servant, O'Brien wrote the novel on his 1917 Underwood 3 standard typewriter with a 14-inch carriage (serial number 178622) in the bedroom he shared with his younger brother Micheál Ó Nualláin. 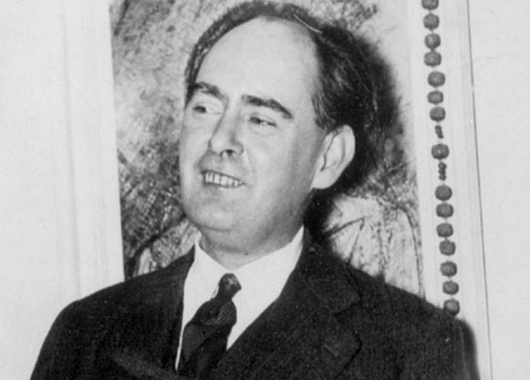 O'Brien, born in Strabane, County Tyrone, today stands in his richly deserved position as a key figure in postmodern literature. His many brilliant, outlandishly comic and satirical thrice-weekly columns in The Irish Times and an Irish language novel An Béal Bocht were written under the name Myles na gCopaleen ("Miles of the Ponies"). The columns appeared under the heading "Cruiskeen Lawn", transliterated from the Irish crúiscín lán, "brimming small-jug". But At Swim-Two-Birds is O'Brien's masterpiece of comic story-telling, and one of the most sophisticated examples of metafiction. The novel's title derives from Snámh dá Én (Middle Irish: "Swim-Two-Birds"), a ford on the River Shannon, between Clonmacnoise and Shannonbridge, supposedly visited by the legendary King Sweeney, another character in the novel. The novel was included in TIME magazine's list of the 100 best English-language novels from 1923 to 2005. 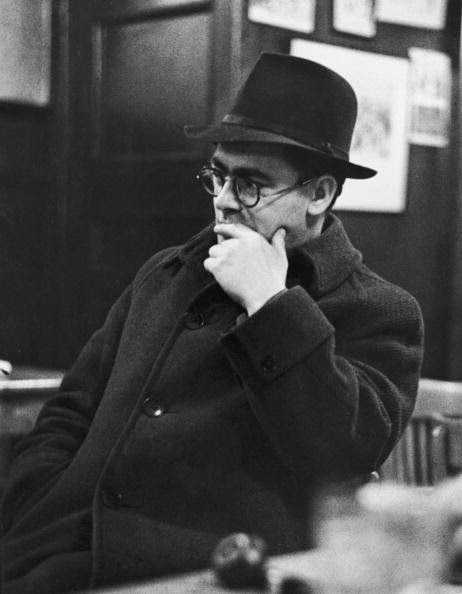 O'Brien is seen here in Dublin's Palace Bar in 1942. The Palace, a pub in which I have imbibed pints of Guinness on many an occasion, is now the scene of an annual MylesDay, held on April 1, the anniversary of O'Brien's death. The event in a way mocks Bloomsday, which celebrates the events in Joyce's Ulysses each June 16. Ironically, however, it was O'Brien who, on the 50th anniversary of those events, first organised the now traditional daylong pilgrimage along the Ulysses route. 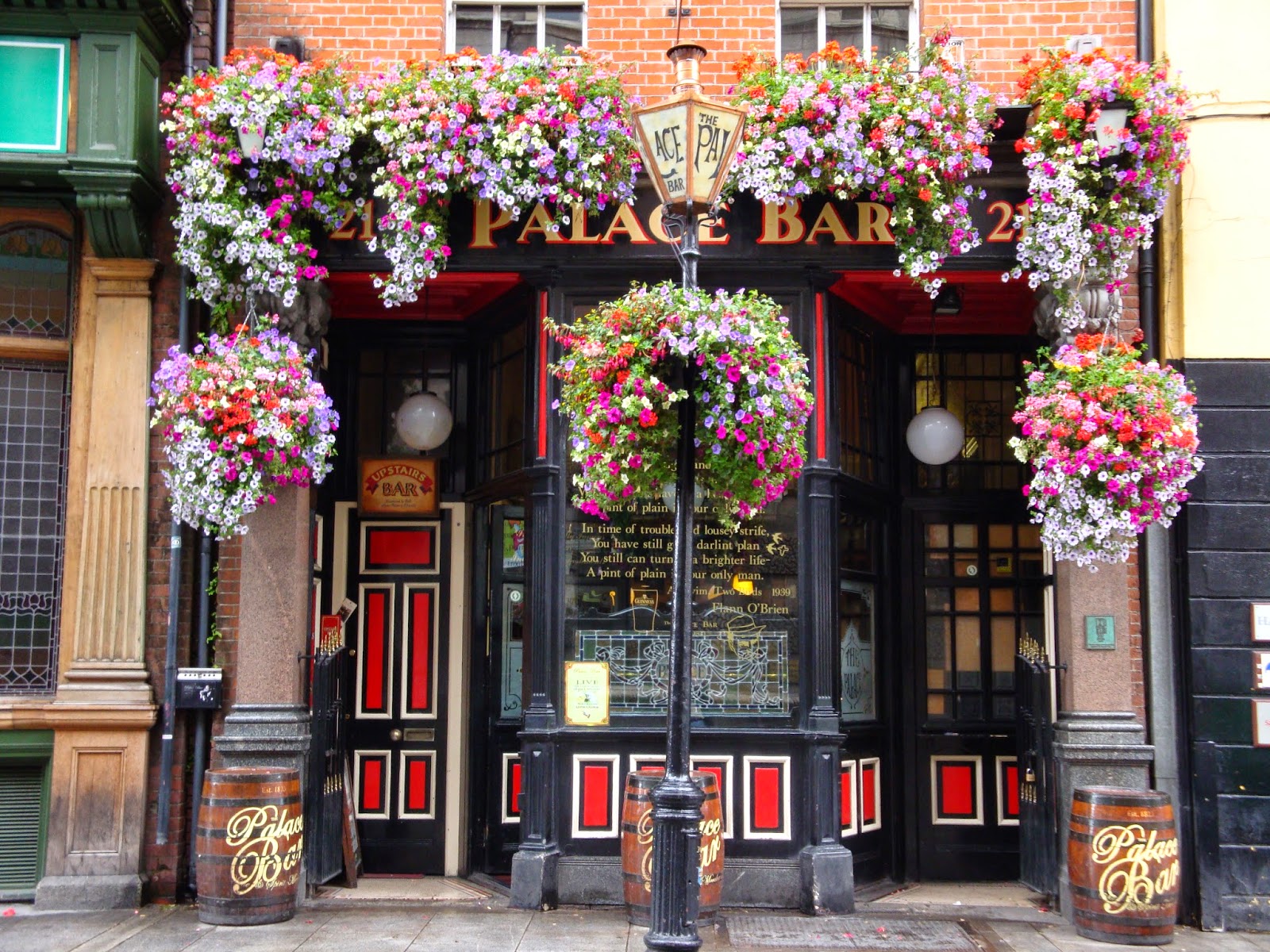 Recommended: From The Times Literary Supplement, October 5, 2011, David Wheatley's "Reading Flann O’Brien on his centenary". Also the TLS blog by Thea Lenarduzzi, "Here comes the Flann", and David Horspoool's "One for the boys?" from that day. Fragments of a filmed 1964 interview with a drunken O'Brien by my former Irish Press editor Tim Pat Coogan can be seen here. 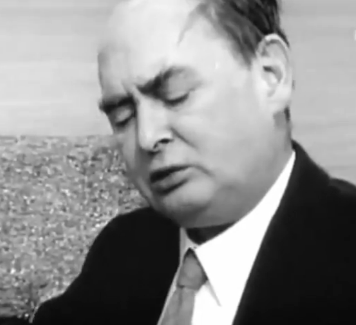 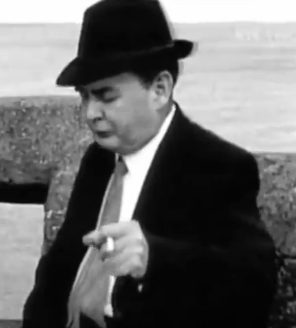 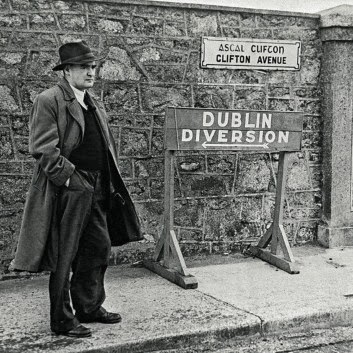 Great post, Rob. "At Swim-Two-Birds"! Intriguing title, must check that one out! :)