Trouble at Station: Typewriter Thievery - Blow to Public Typing on its 60th Anniversary 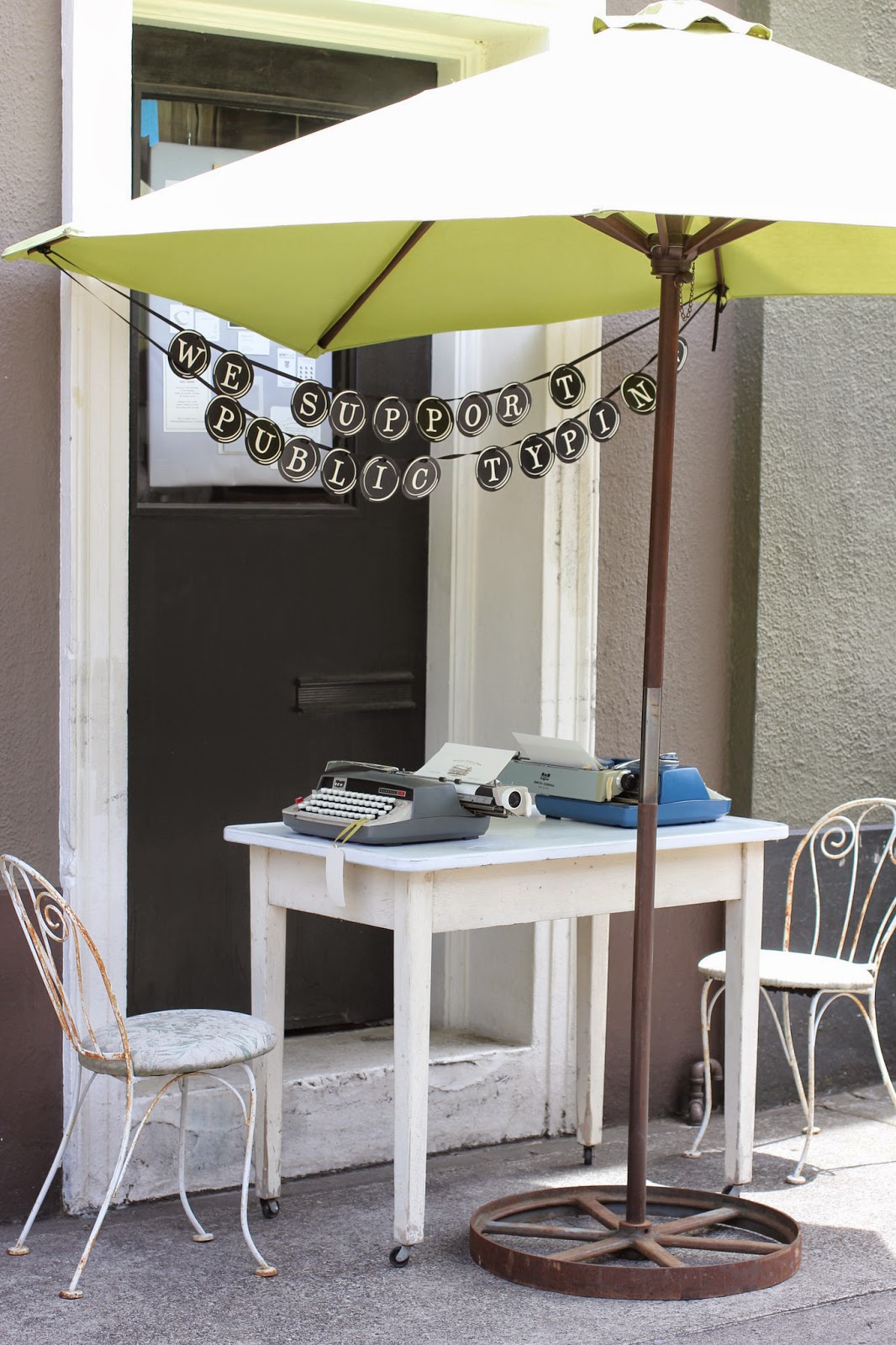 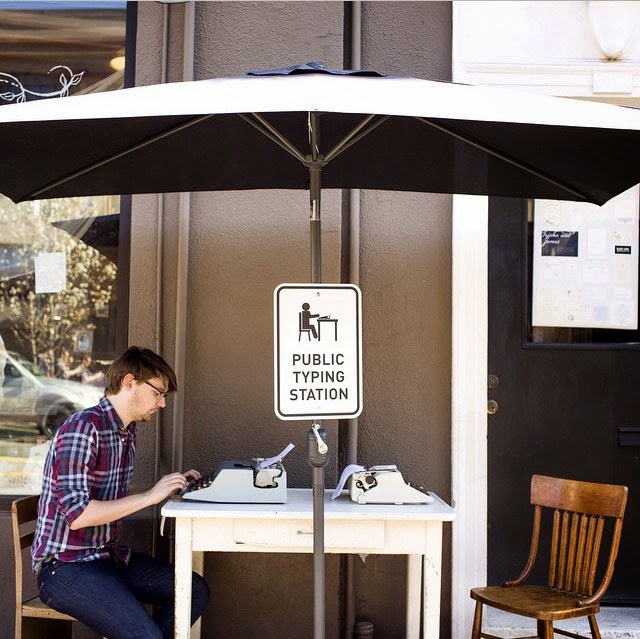 Someone's been stealing sidewalk typewriters from the "Public Typing Station" in Portland, Oregon (featured in the latest Welcome to the Typosphere post from Richard Polt, with an image from Rachel Coward). 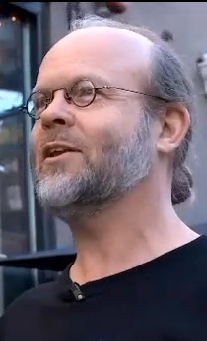 Ron Rich, above, owner of Oblation Papers and Press on Northwest 12th Avenue in Portland's Pearl District, has reported to police the loss of two typewriters, stolen from right outside his shop door.
Ron had the idea to leave a pair of typewriters in front of his store at a "public typing station". "People tend to use them to say that they love somebody. Some people are saying that they're getting divorced. Some people are revealing personal things that maybe they wouldn't reveal to anybody else," he said.
Ron is now securing his typewriters with a lock and cable. "I've tied them down and, you know, it doesn't seem quite as free and liberating." 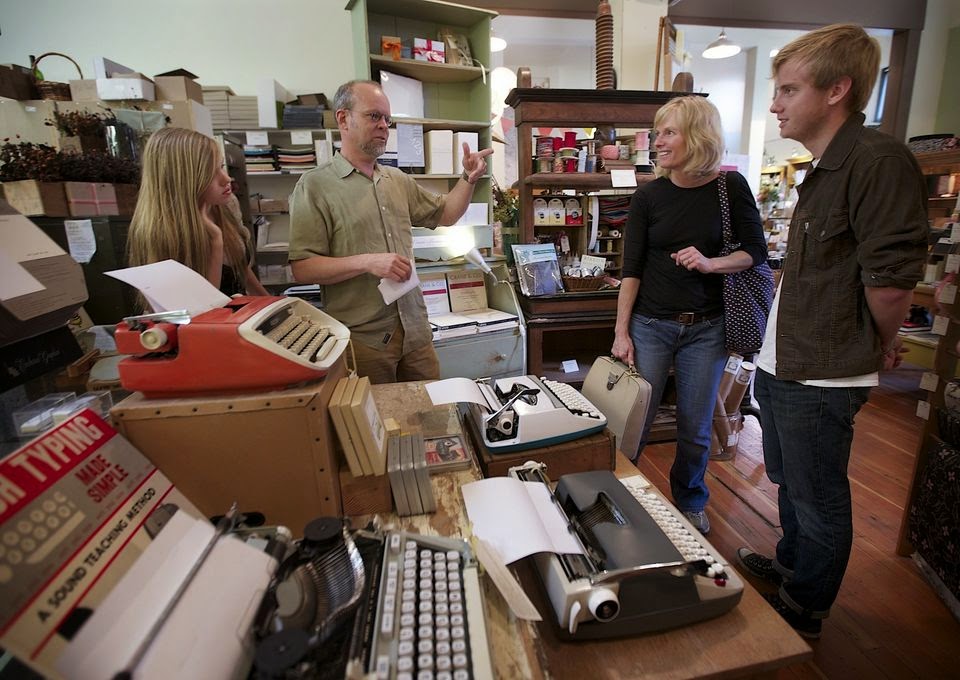 Above, Ron, second from left, talks with Cindy Bilotti, second from right, who, with her son, Ben, bought a refurbished Consul portable during the Portland store's "type-in" on International Typewriter Day in 2013. Below, Rich talks with Arthur Springer, who uses a manual typewriter to prepare invoices for his business. 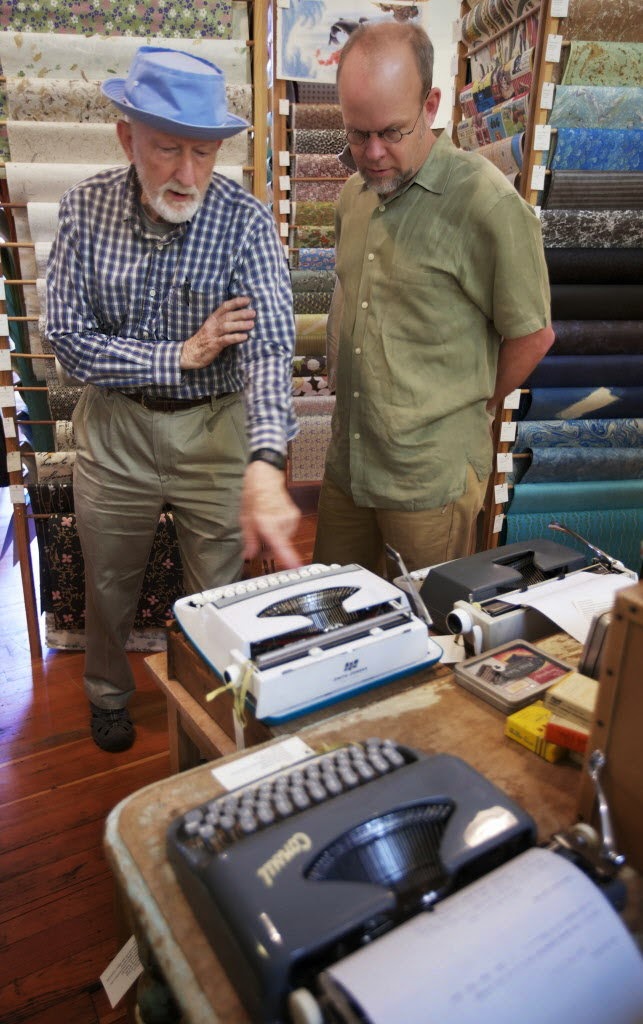 The Oregonian's Carli Brosseau (below) has responded to the thievery with an "Open letter to thief: Typewriters were key to Portland's confessional; please return". "So far, no one has confessed to stealing a typewriter," Carli wrote. She quoted Ron as saying, "Someone has seen the opportunity ... It may be, though I doubt it, that they're taking it to the park to write a poem or going to Powell's to work on some literary pursuit, in which case I would support that."
Carli reported that two years ago Ron responded to a Craigslist ad for 50 typewriters in Keizer, Oregon, but learned when he arrived that there were actually 250 machines for sale. It was a collection born to fill the time opened by retirement, he was told. Ron sells about one a week, at around $150-$200 each. 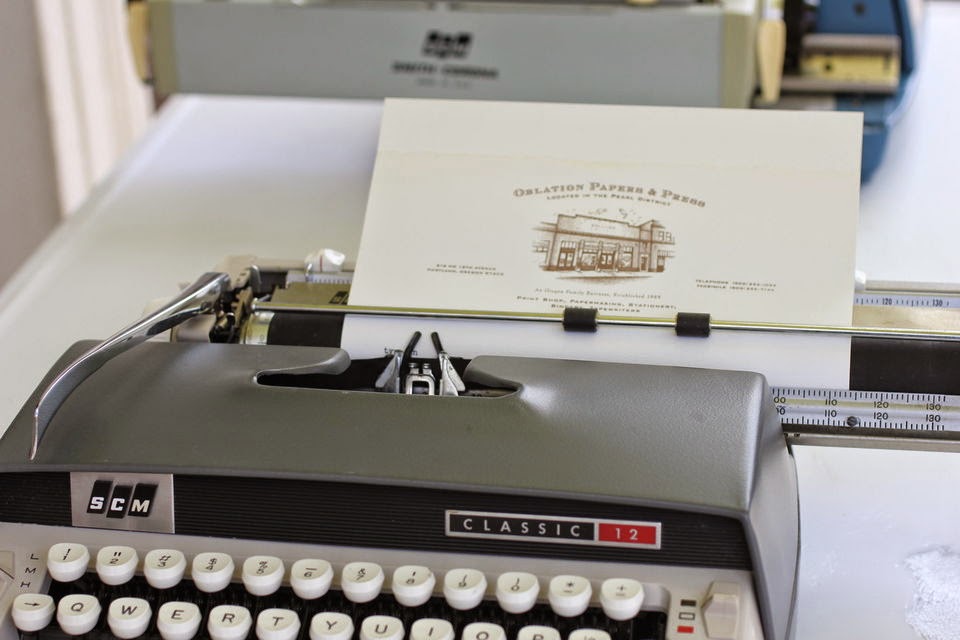 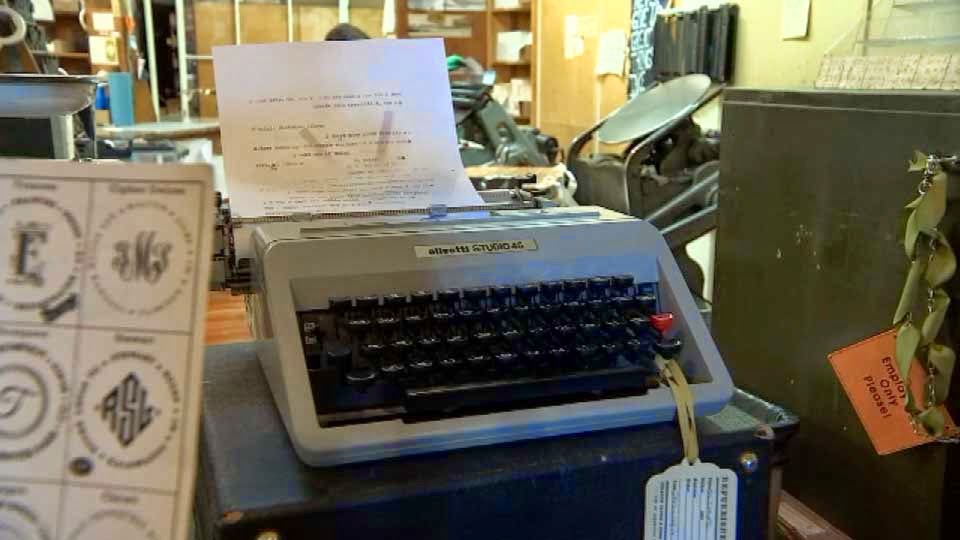 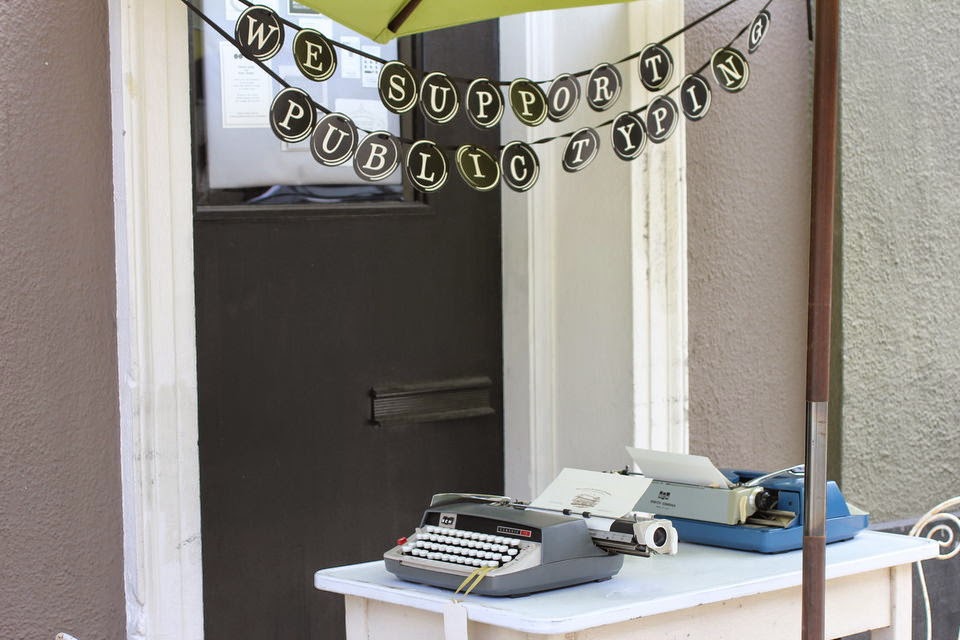 60th ANNIVERSARY
Last May marked the 60th anniversary of the public typing station set up outside Olivetti's store on Fifth Avenue, New York. The event was photographed for LIFE magazine's issue of April 11, 1955, by Michael Rougier, below. The model used was an Olivetti Lettera 22 (bolted to its stand!). In 11 months, more than 50,000 people used the typewriter. 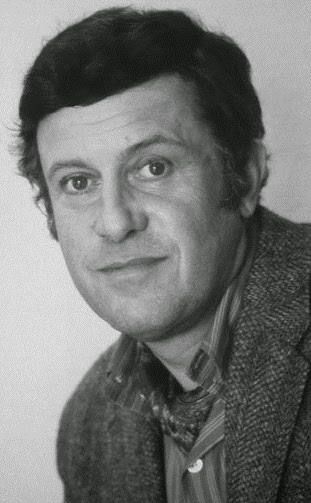 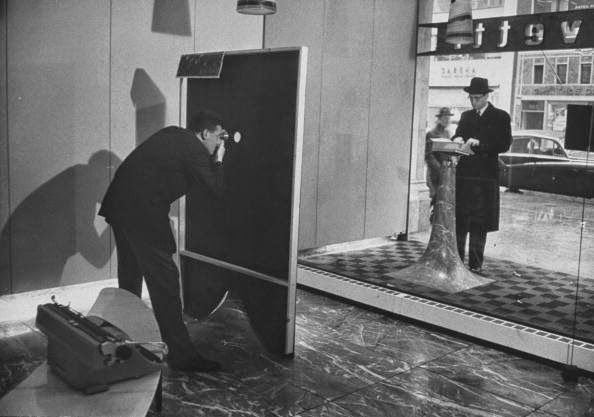 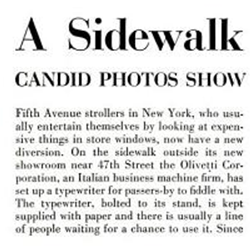 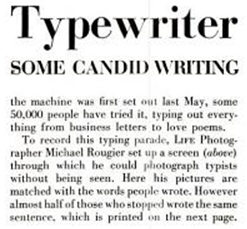 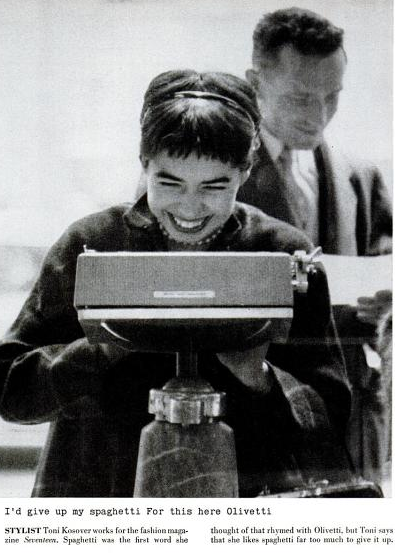 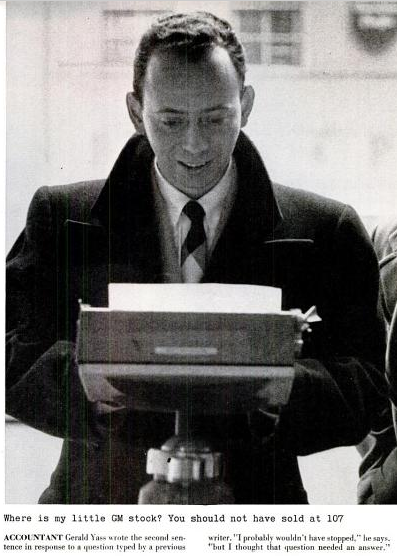 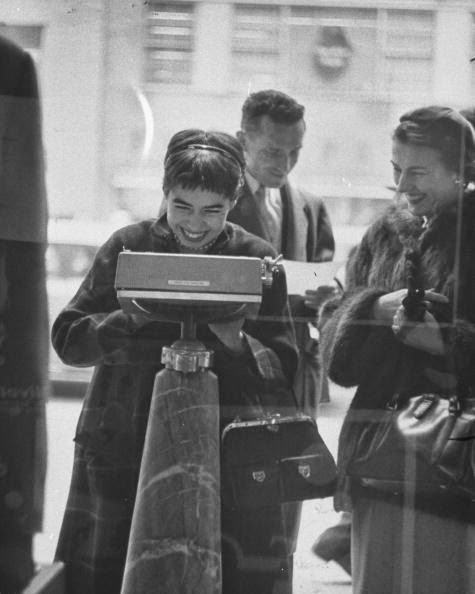 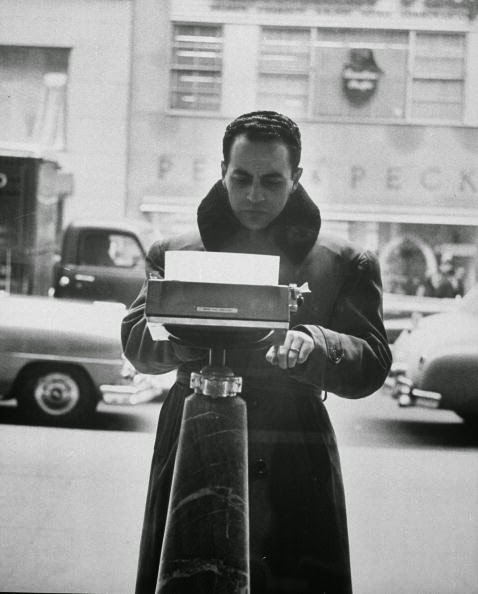 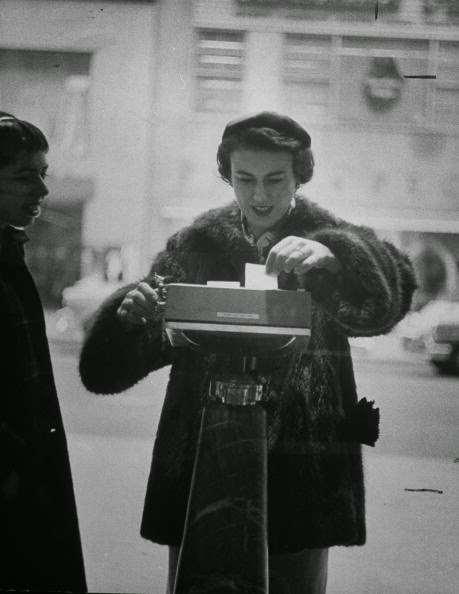 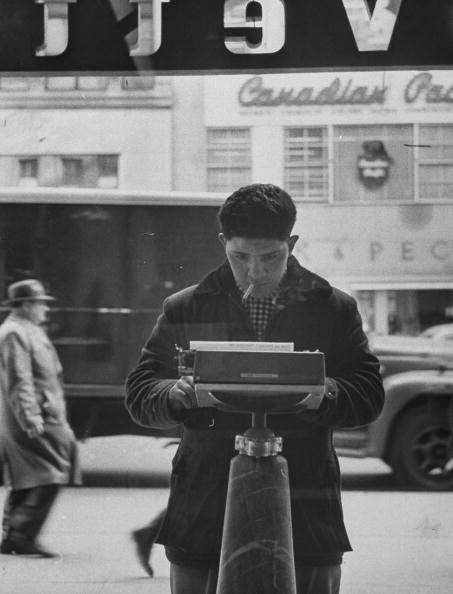 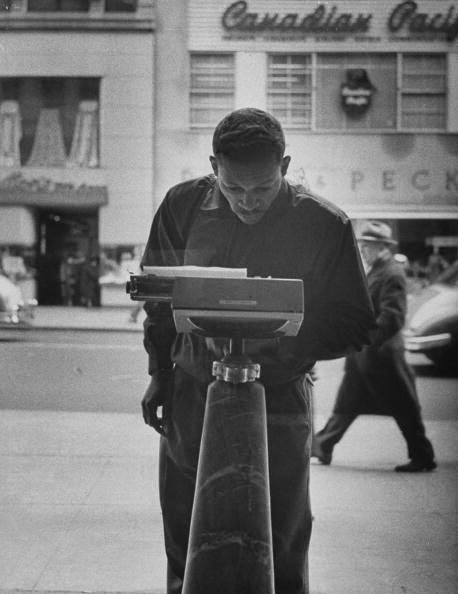 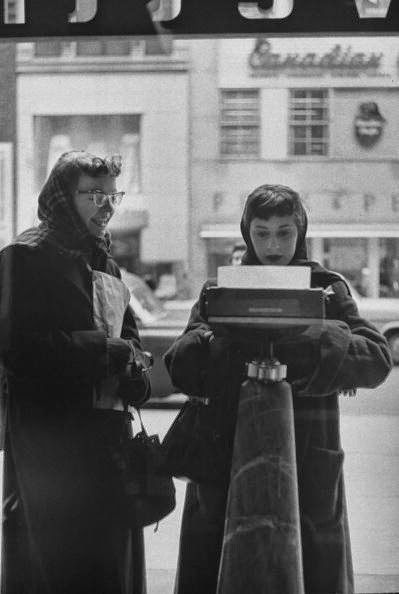 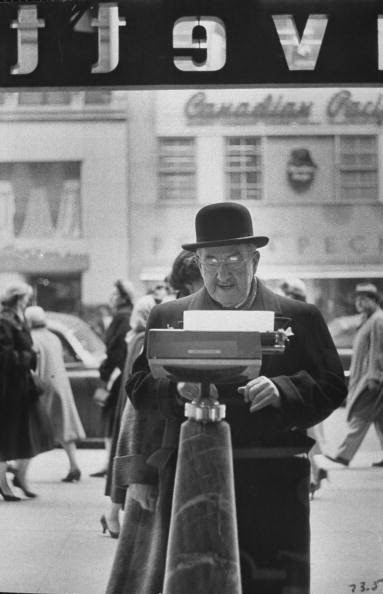 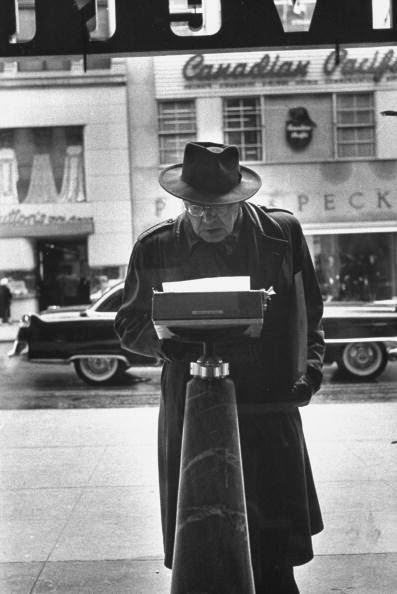 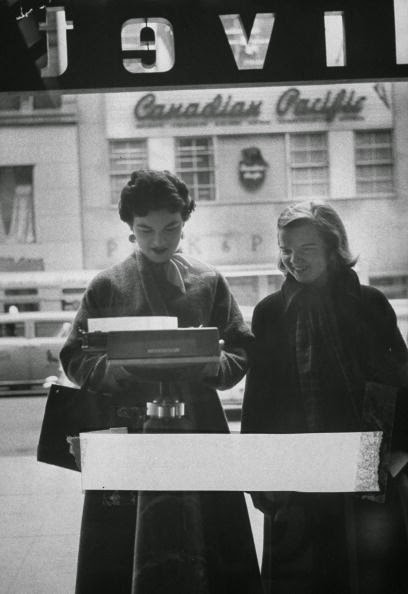 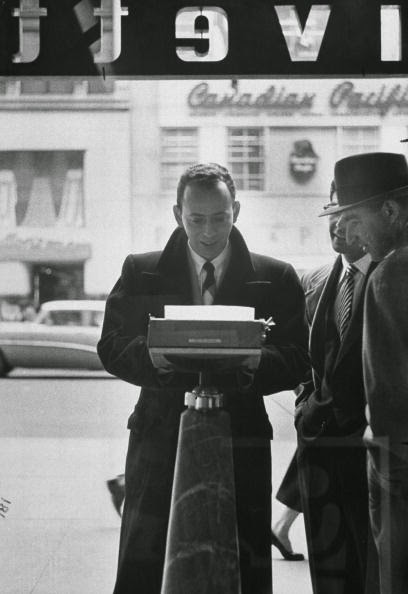 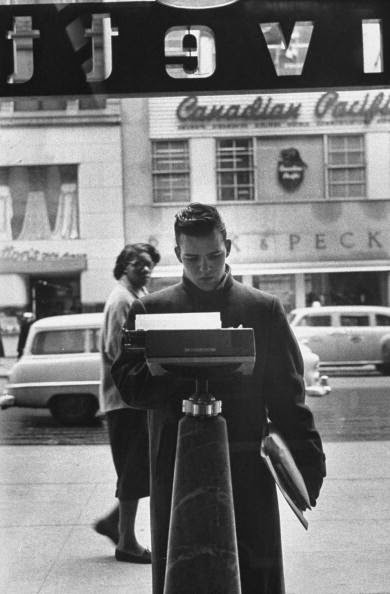 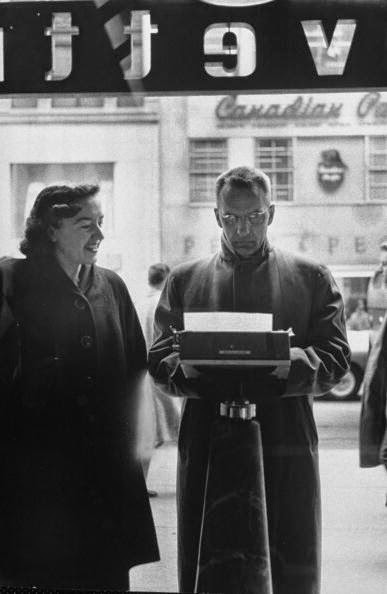 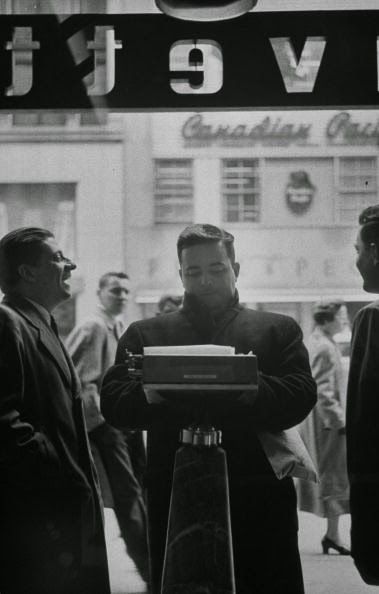 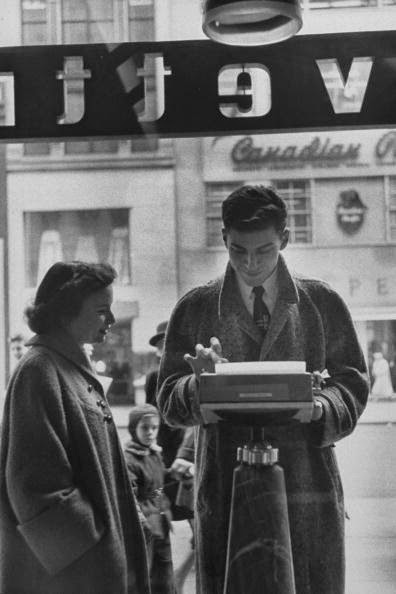 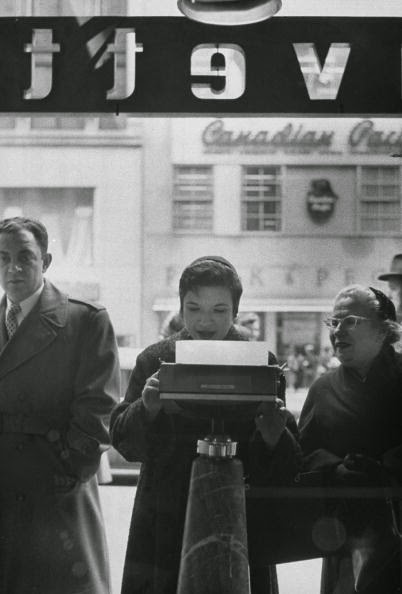 Posted by Robert Messenger at 15:05

Life would be so much more pleasant without thieves and cons.
Those are some great old photos of the original typing station.

It was sad reading about the stolen typewriters, but your second story was a delight to read. I'd say fences make good neighbors, as do locks. They should put out two more machines, locked or bolted securely.

I'll bet those who use the public stations leave fascinating words behind. If only there was one near me...

I once spoke to a repairman whose client had to get his carry case fixed after a robber broke into it, mistaking the case for tools. Maybe that's one of the bane's of the typewriter's modern resurgence: it now has street value.