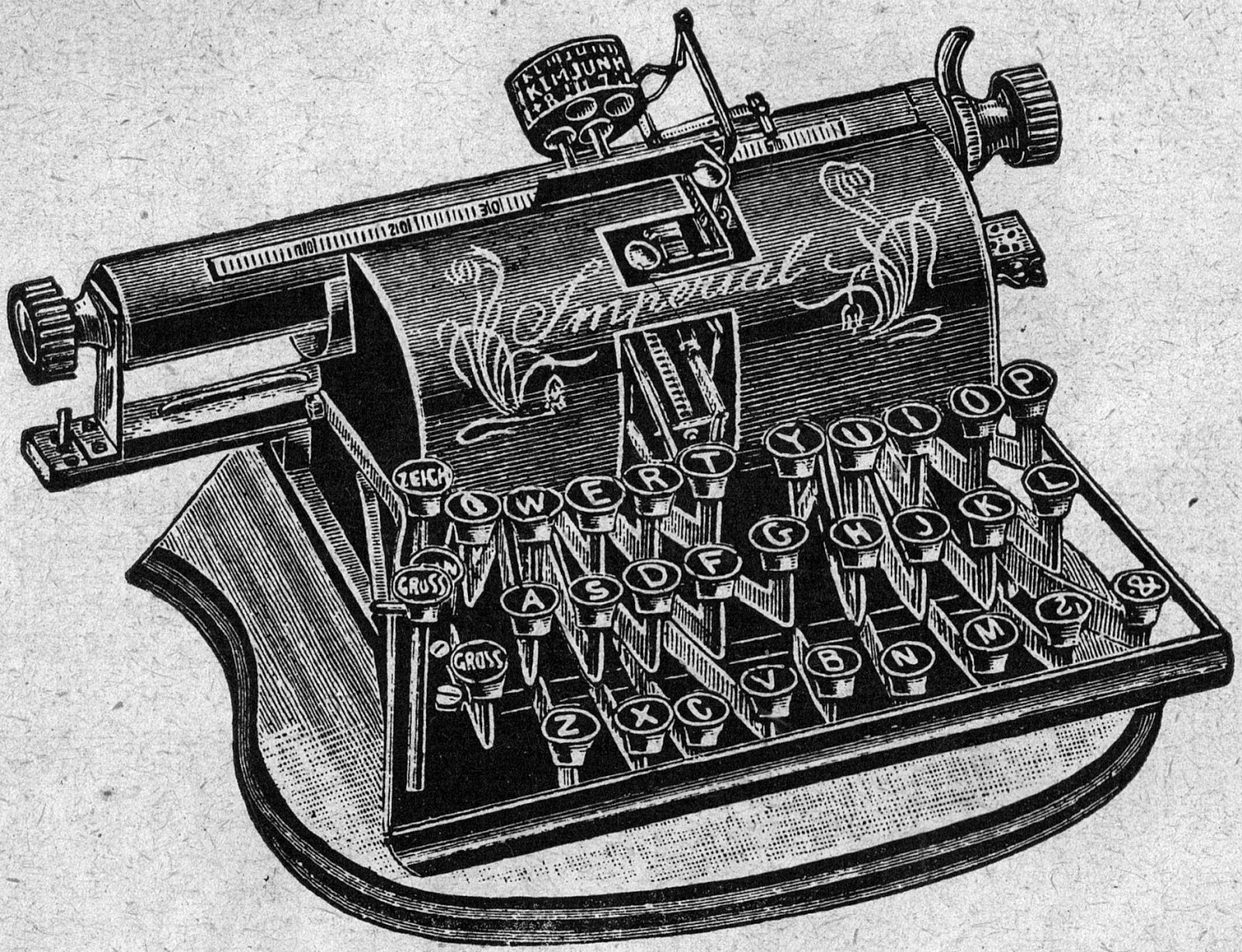 ... which, sadly, I don't have in my collection anyway. Is there one in any collection? This was the first typewriter called an Imperial, and was made by Leipzig sewing machine manufacturer Karl Heinrich Kochendörfer in 1900. 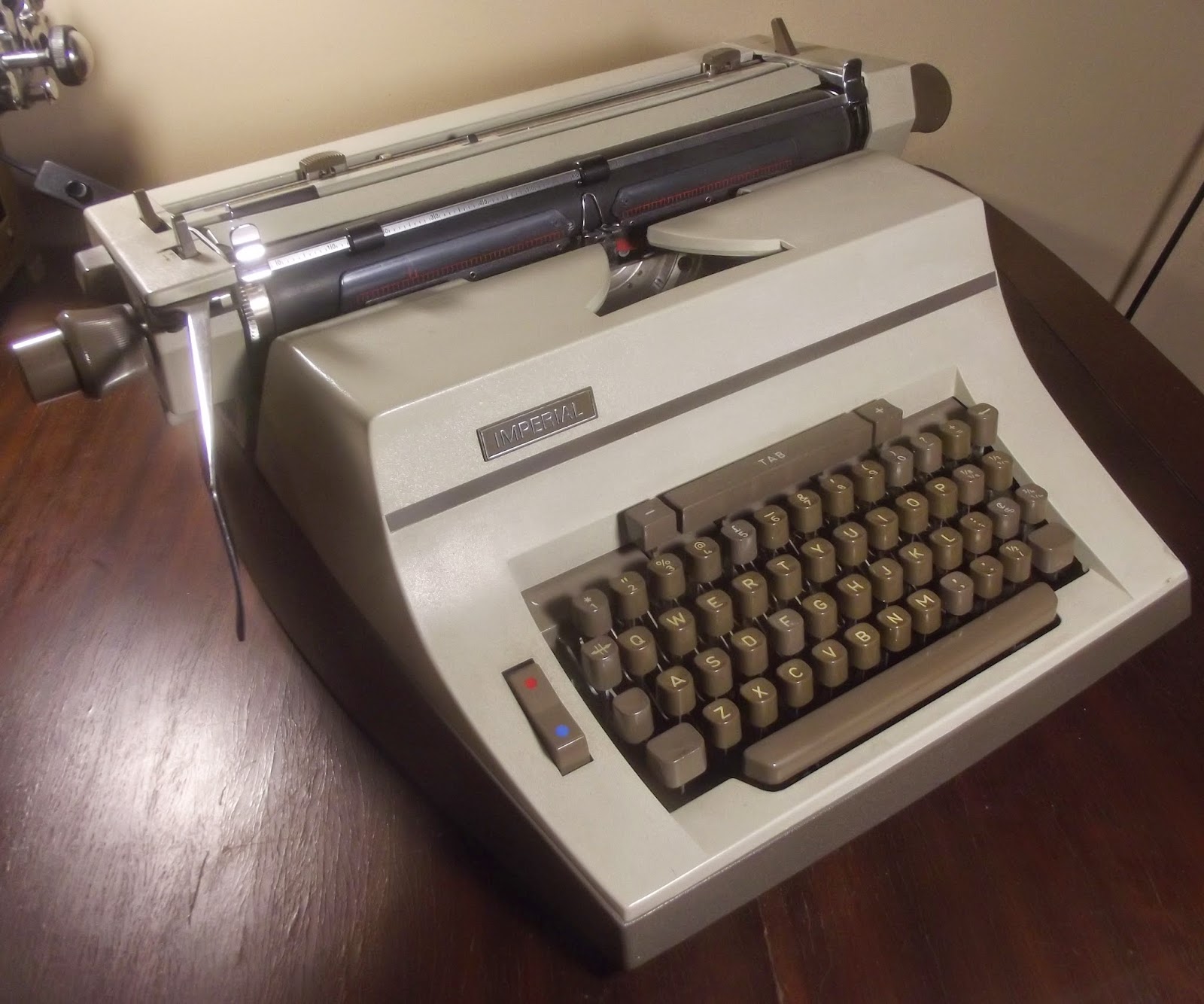 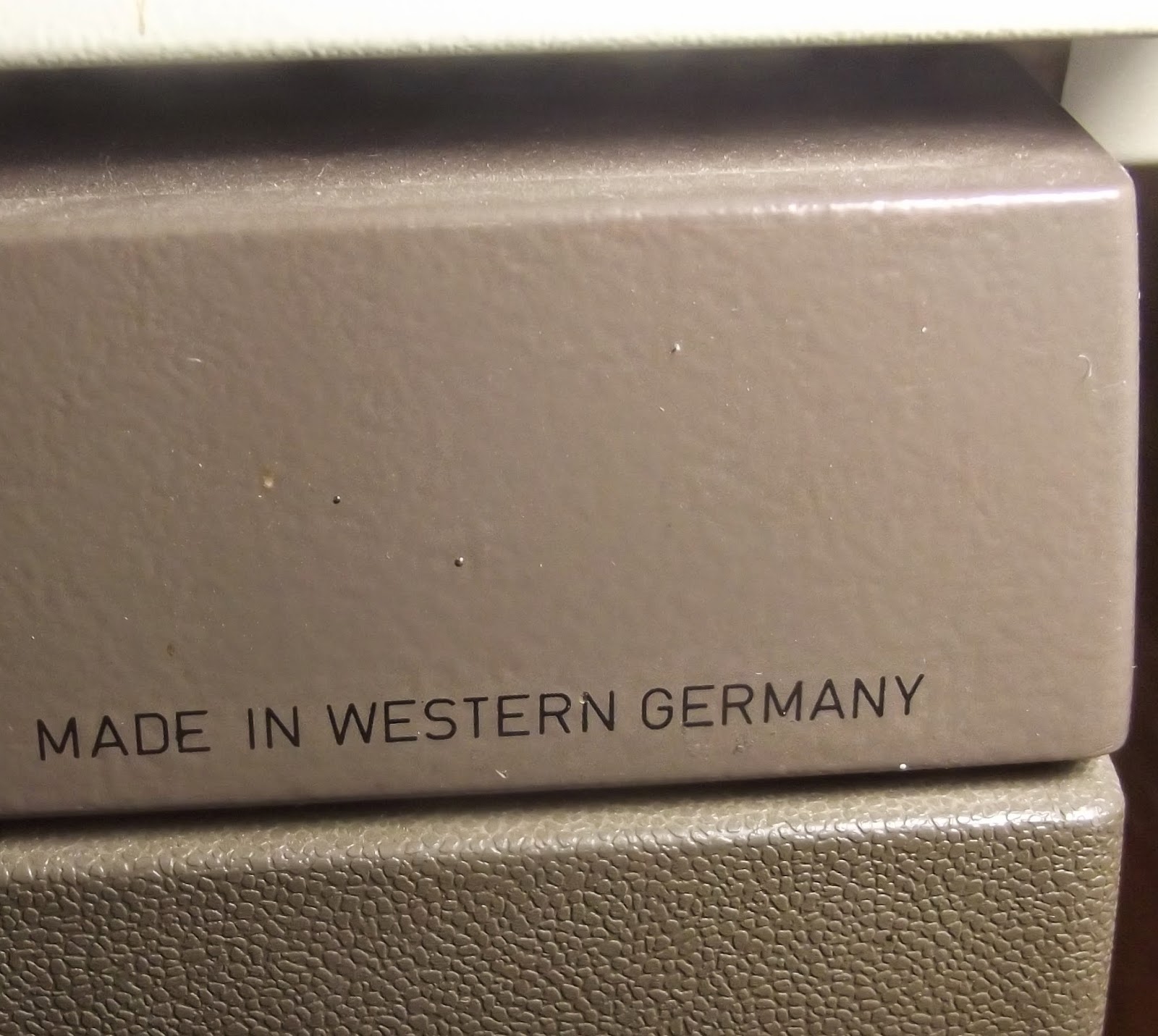 Which is very obviously a conventional-sized carriage version of the far more common Adler Universal 200: 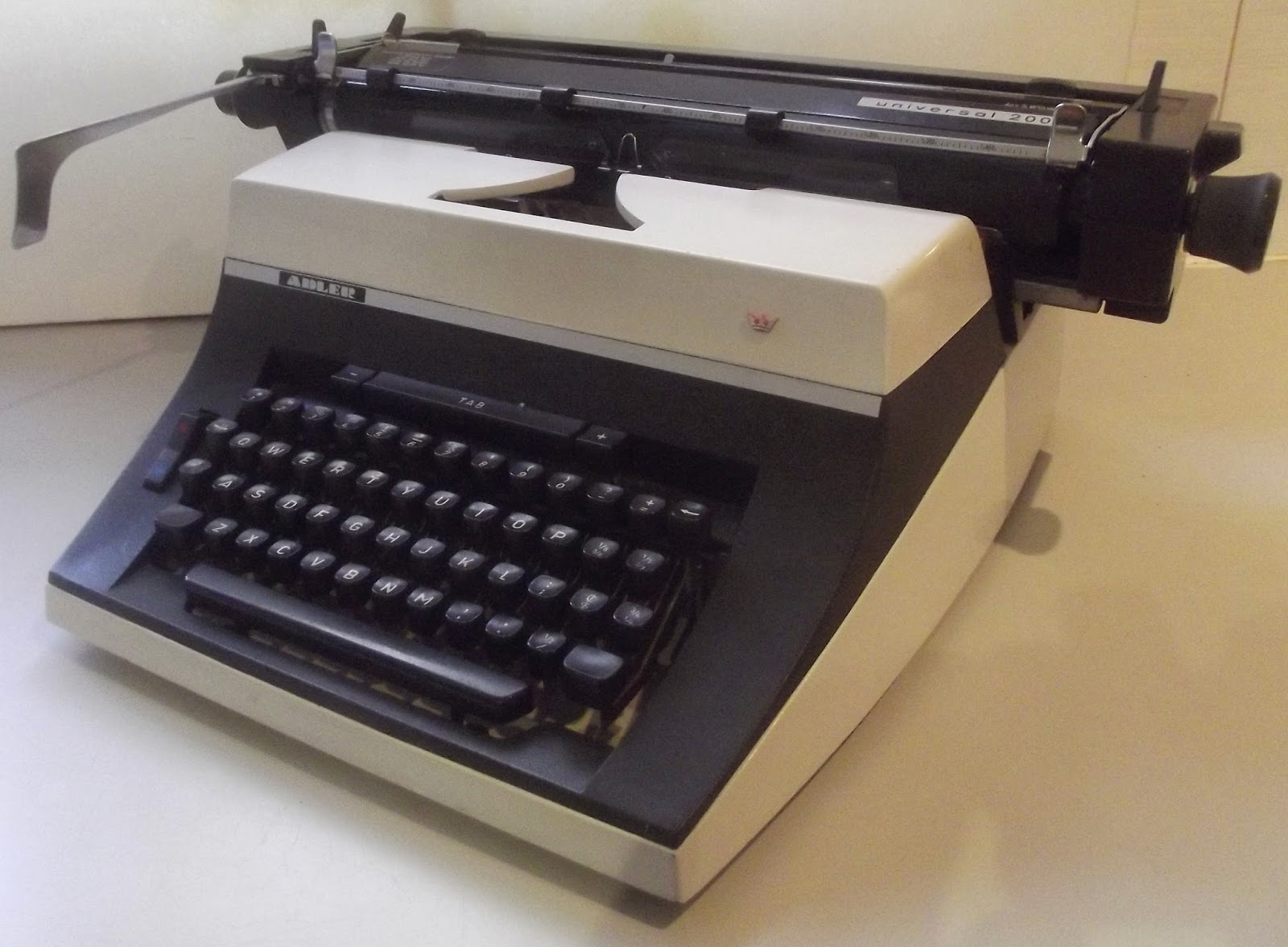 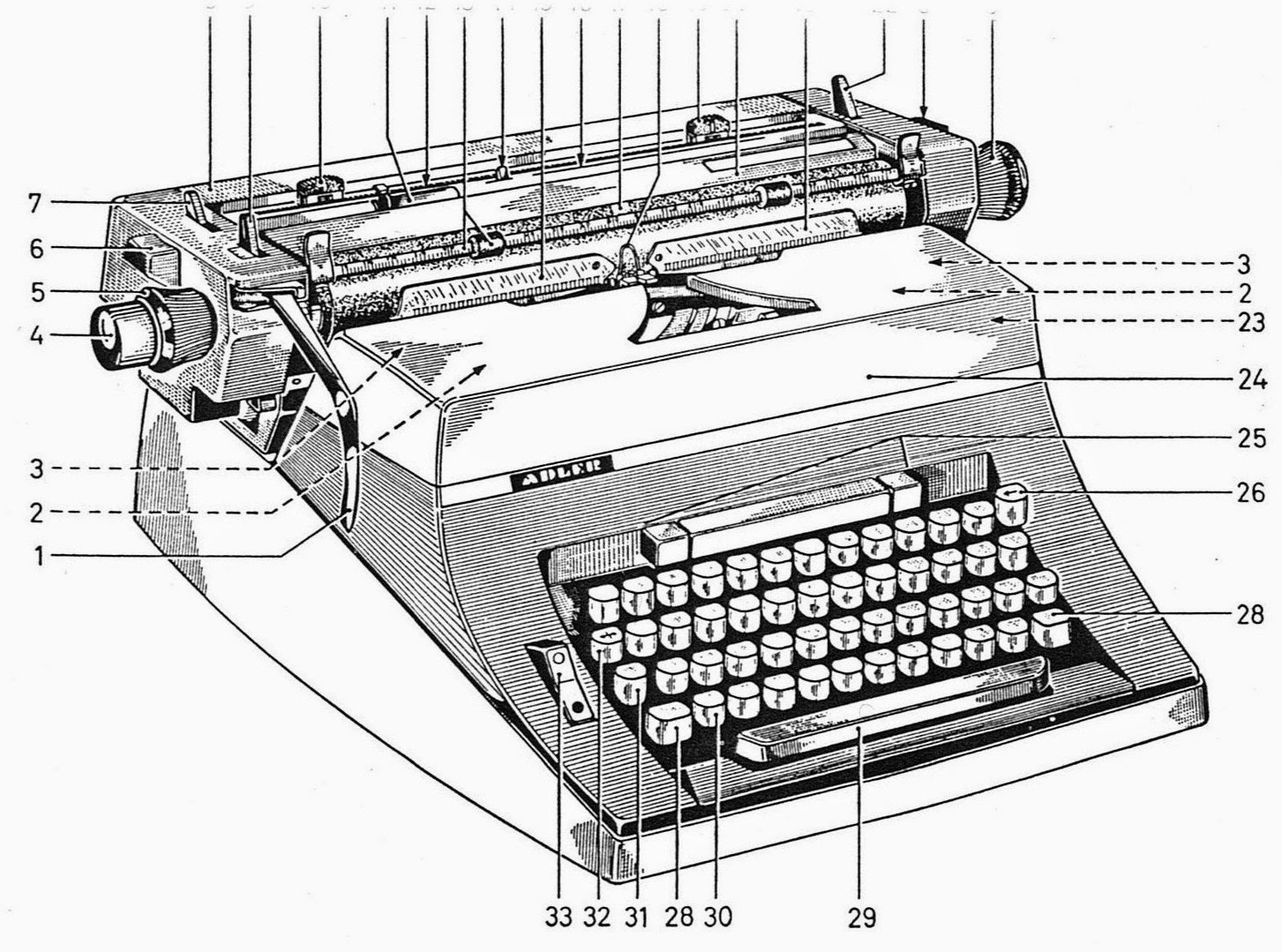 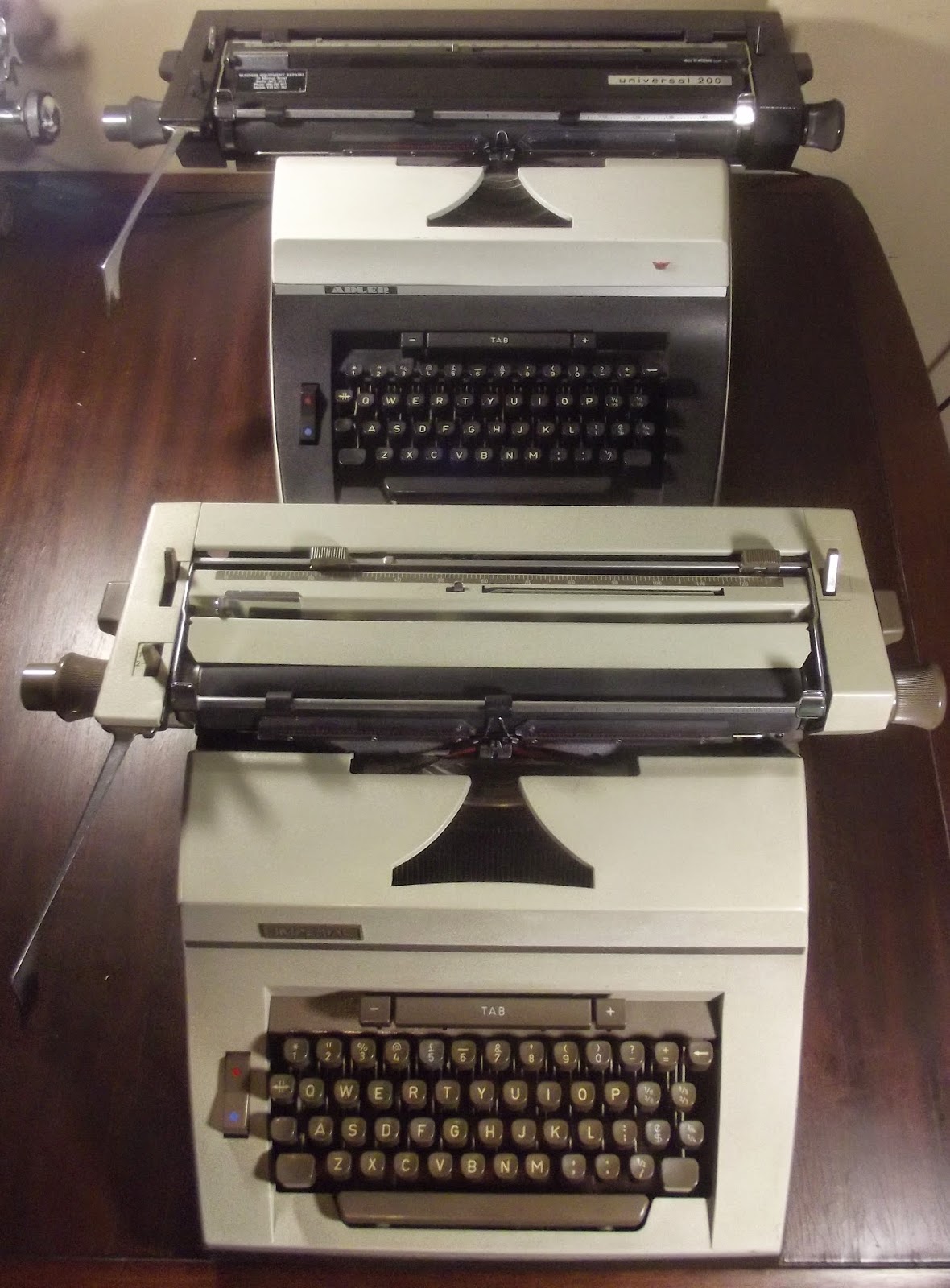 The Imperial 90 and the Adler Universal range 200-390-400 were made by Adler in Frankfurt in what was then West Germany, while Imperial and the Nuremberg-headquartered Triumph-Adler (T-A) were under the control of Litton Industries.
The production of Imperial standards in England ended when Litton closed both of its British plants, in Leicester and Hull, in early 1975. Litton's ownership of T-A had only been finally approved by the United States Federal Trades Commission seven months earlier. Meanwhile, Imperial portables were being made in Japan and Portugal, while T-A's standard and portable manufacturing continued in West Germany.
Although from 1975 the T-A and Imperial standards were made under the one roof, the serial numbers seem unrelated - #30318307 (body and conventional carriage) on the Imperial 90 and #9733-589 (carriage, -720 on the body) of this Adler Universal 200. (These numbers extend beyond those on the Typewriter Database: slightly on the Adler, which goes up to 1973, and vastly on the Imperial, which only goes up to the Model 80 in 1973). Nor are they related to the sequence of numbers which embrace Imperial standards from the Model 60 to the Model 80. Strangely, what also differs is that on the Imperial the switches to remove the carriage move back, and on the Adler they move forward. Otherwise the mechanics are identical. 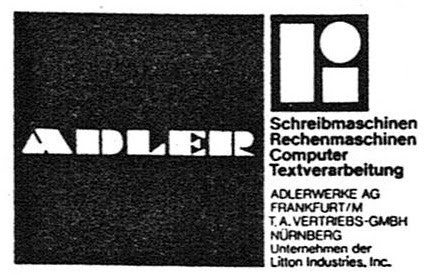 Until last Saturday I didn't know an Imperial 90 even existed, let alone that an Imperial standard was made in Germany - that is, one with the brandname of the Imperial Typewriter Company founded by Hidalgo Moya in Leicester, England, in 1908.
Before being given this Imperial 90, I had been under the mistaken impression that the line of standards from the once proudly British Imperial company extended to the Imperial 80: 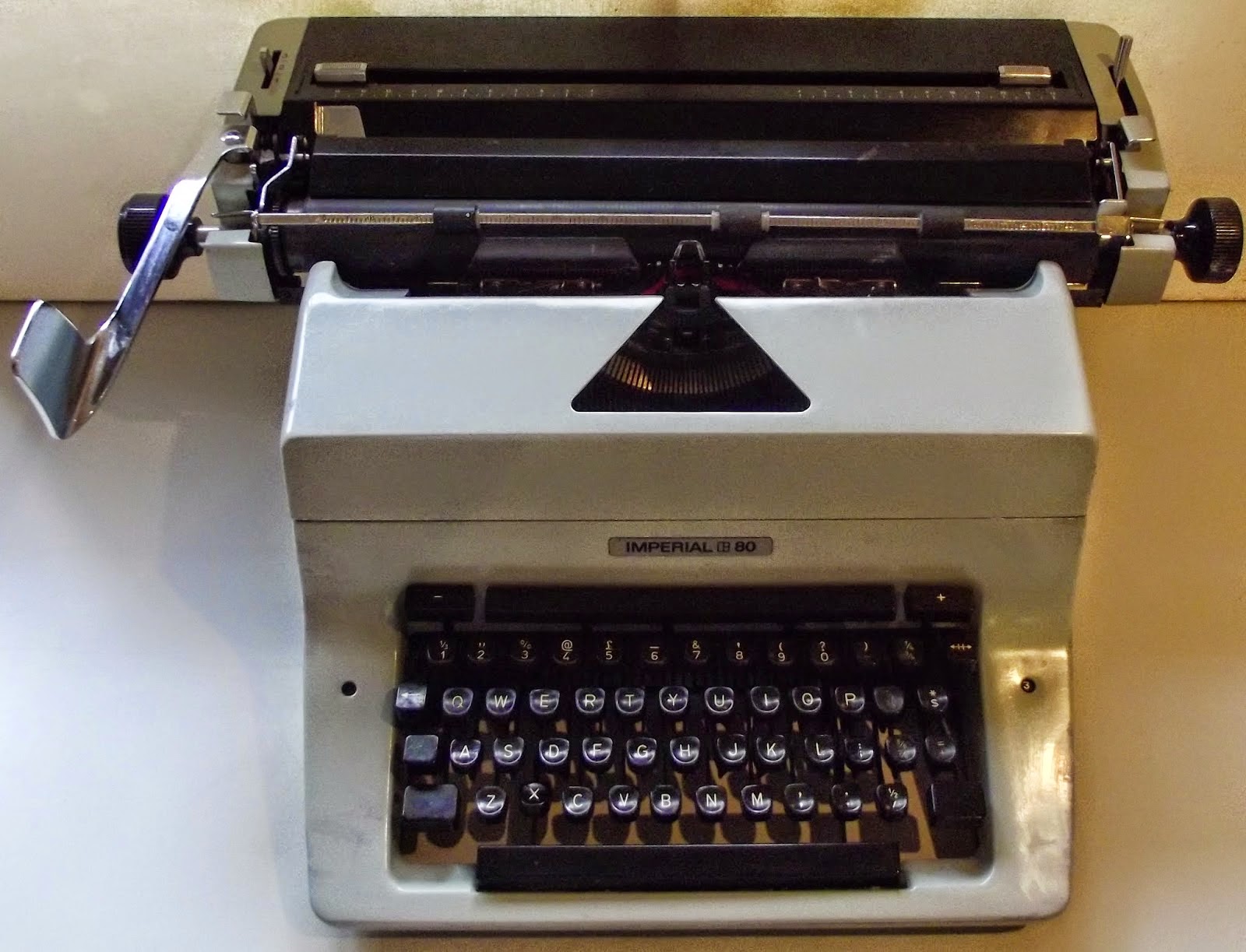 I was given this Imperial 80 among a haul of 25 typewriters donated last year (the so-called "booty"). It is English-made, but, given its vintage, I would hazard an educated guess that it was manufactured in Hull - between 1968-70 (series I) and 1970-73 (series II) - not Leicester. The last Leicester-made Imperial standard was probably the Model 70 (one of which also came with the "booty"). Leicester concentrated on standard production from the Model 66 (1954) on to the end of the Model 70 line: 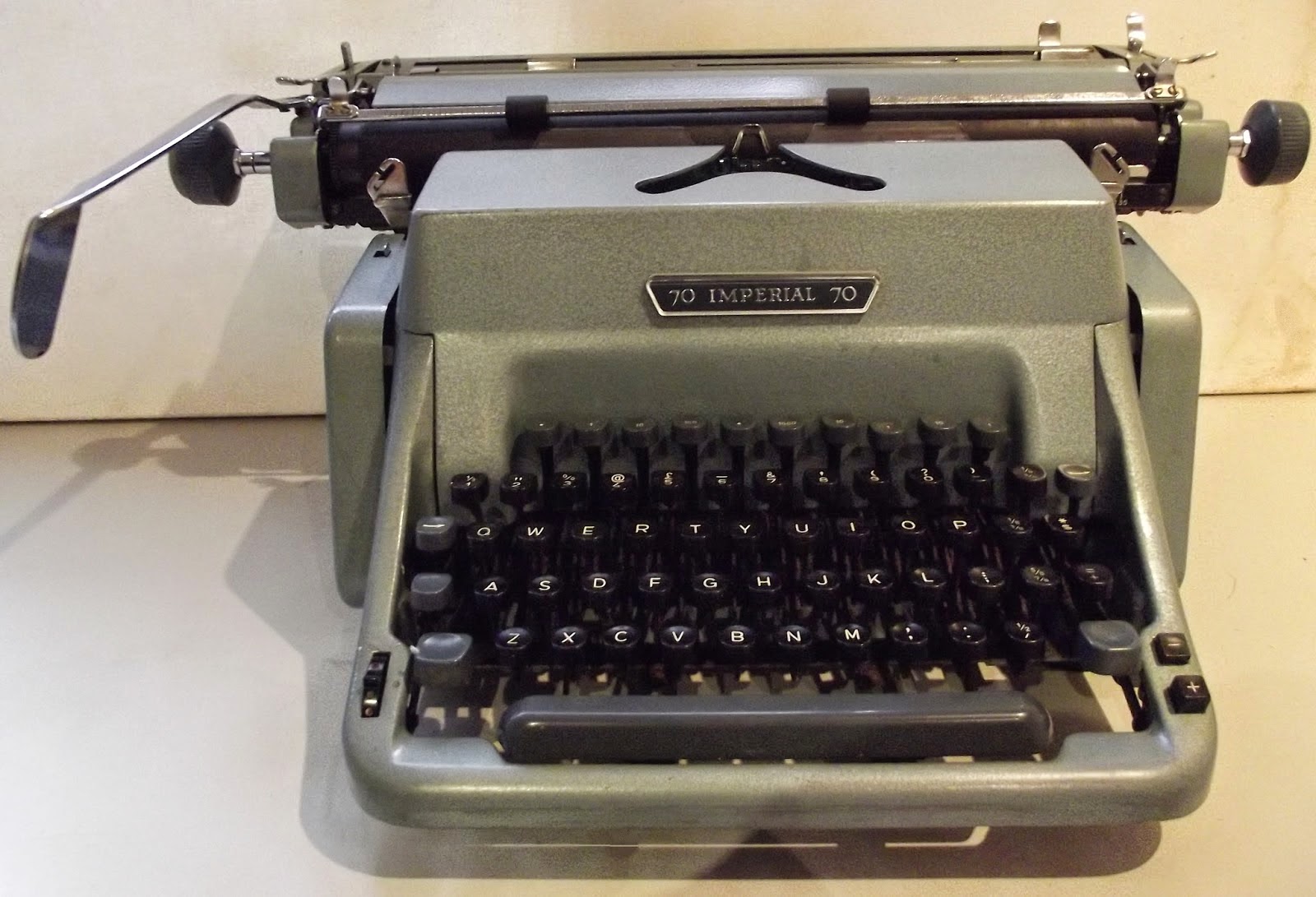 The Imperial 70 (1962-68), which added the capacity for carbon ribbon use, broke the mold for Imperial standards which stretched back to the company's first conventional typewriter, the Arthur Bott Pateman-designed Model 50 of 1926. The Model 66 (1954-67) was the last truly "demountable" Imperial, in that the carriage could be easily removed as well as the keyboard and typebasket as a separate unit. On the 70 and the 90, the carriage comes off, but not so on the 80.
After some months of remaining convinced the 80 was the last Imperial standard, imagine my surprise on Saturday to find there was a later model - and one made in Germany. From my earliest days of collecting, I had been aware of a semi-portable, the Imperial 34, made by Robotron in East Germany in 1977, but knew that this had nothing to do with the British company - or with Litton Industries for that matter. It's probably much more familiar as an Erika, but was also marketed in Britain as a Boots, and elsewhere as an Optima: 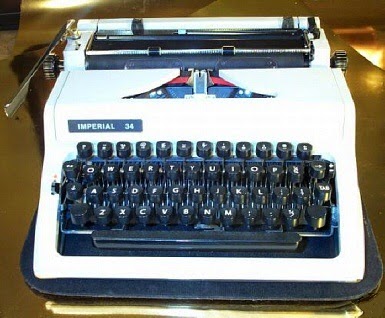 The sequence of events leading to me acquiring the Imperial 90 - and realising for the first time that such a model even existed - was unusual. First, some weeks ago, a Canberra lady contacted me and offered her Imperial Good Companion 7 portable (one of six I've been given in the past year - why did I once think these were scarce?) and an Olympic Electronic Compact. A few days after I had collected these machines, a lady called from Wagga Wagga and said she'd been speaking to her cousin in Canberra and asked if I'd also take her typewriters off her hands. We arranged to met on Saturday while this lady was on her way through Canberra to the Coast. She told me she had an old Remington (the one I restored last weekend), an Olivetti portable and an Imperial "with a wide carriage". When I went to pick up the typewriters, this lady took the cover off the Imperial and I thought to myself straightaway - "she's made some silly mistake, this is an Adler, not an Imperial". But, I wondered, how on earth could anyone read "Imperial" for "Adler"? Then, of course, I took a closer look and discovered it was an Imperial! 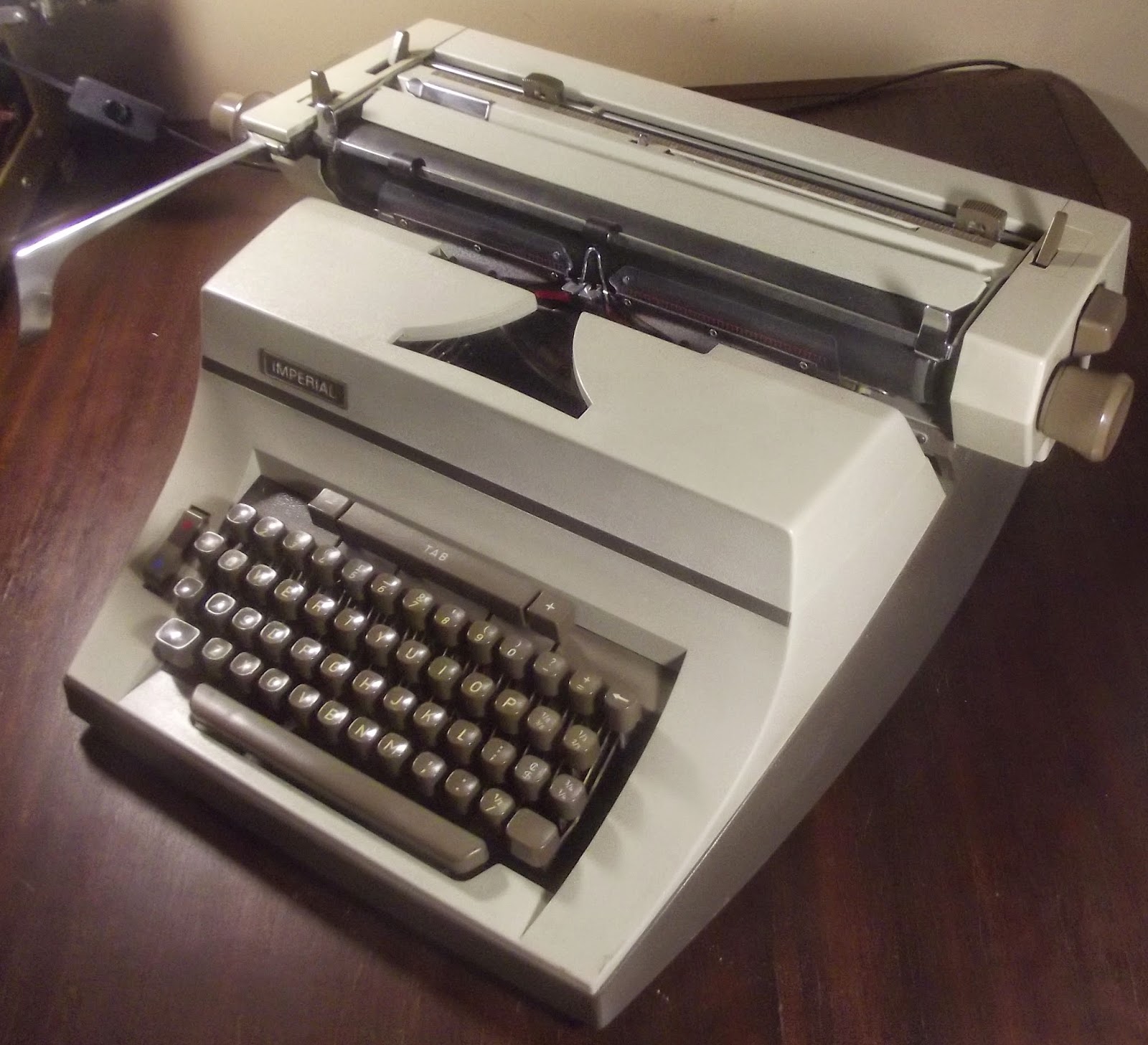 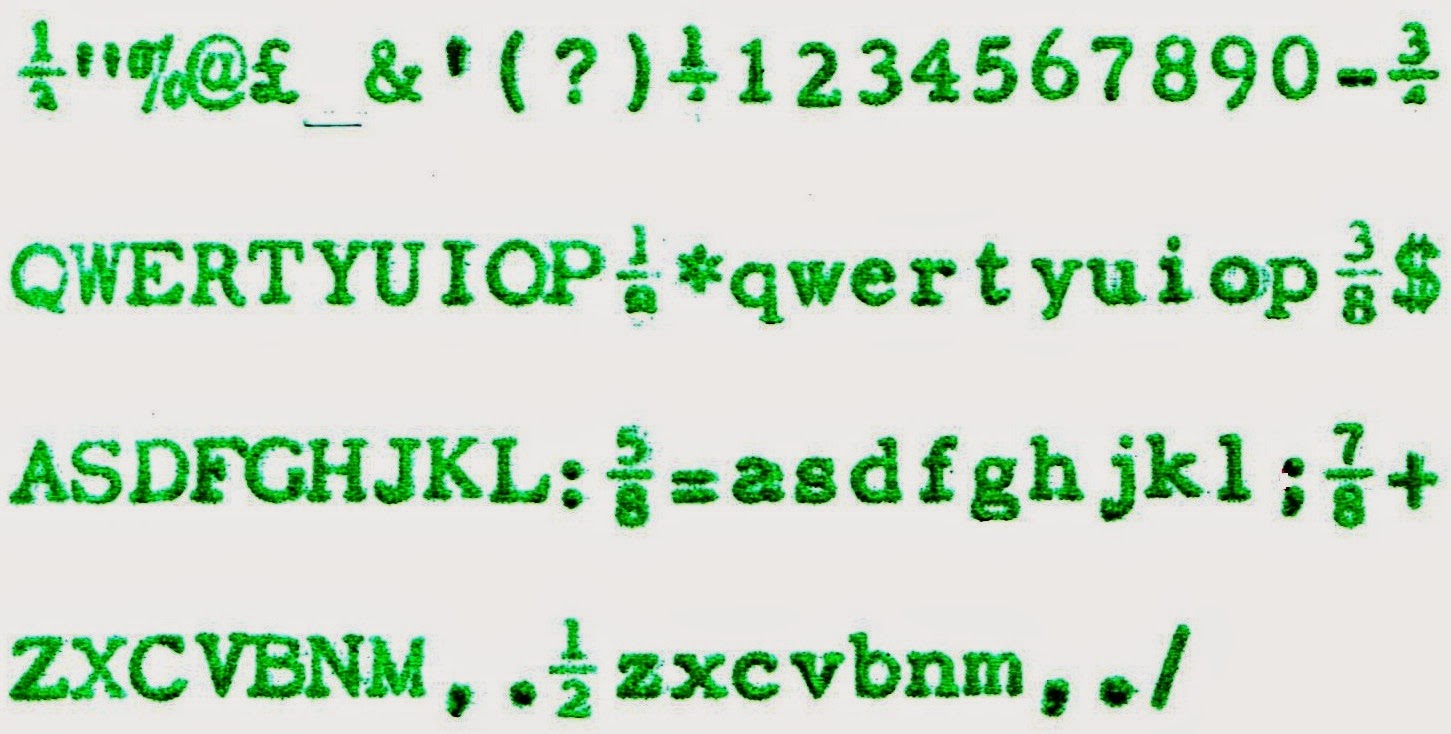 Imperial 70
The beginning of the end for typewriter companies such as Imperial came with the decision by Royal McBee stockholders in New York on December 4, 1964, to merge with Litton. In the following years Litton went on to take over Imperial and Triumph-Adler, the latter a $51 million acquisition in early 1969 aimed at “bolstering its Royal typewriter division”. The German takeover was completed in July 1974 and Litton closed Imperial's Leicester and Hull factories in 1975, after losses of $10 million in two years. So the Imperial 90 was almost certainly made in Germany after 1975.
Posted by Robert Messenger at 12:14

That green ribbon is really great.
I need to keep a look-out for one of those, especially since my Adler portables are great typers.

A bit of extra information for you ! There were two Imperial 80s - A Mark 1 and a Mark 2. The Mark 1 model did have a removable carriage. It was the traditional Imperial sliding button system as on the Imperial 70, 66 etc. Of course it had been cheapened - all in black, and no proper buttons, just the bracket bent over ! The Mark 2 dispensed with the return springs. The sliders wetre screwed down and had to be loosened with a screwdriver to get the carriage off. There was an Imperial 95 too ! Made in Bulgaria and actually a Hermes 3000 in an office-machine sized plastic casing. I have only ever seen one of those - new in about 1985 ! Best Wishes, Tom Lucas, The Typewriter Man.

I have an Imperial 90 typewriter from 1974. It was one of the last contract typewriters delivered to Bata Shoe Factory, East Tilbury, Essex which was immediately cancelled and given to Essex County Council who sold them to Gable Hall School Corringham, Essex in 1976.
Fortunately, mine remained in Bata's until handed to a old outbuilding in Stanford-le-Hope where I bought it for £90 in 1982.
I then sent it back to Bata's who overhauled it for me where I was told that it was an original Bata contractual machine.
It now lives with me in Stanford and still works, but it would need an overhaul again because I had left it on the floor in my bedroom for over twenty years.
Lovely machine and as I was taught on Imperial 90's, I would never part with it.

I was on Ebay this week and found a second Imperial 90 model that was classed as spares repair. I need a few bits on my typewriter and the condition of the one on Ebay might not be any good as its rusted and the carriage sticks. Great starter to replace a few things on my typewriter. I might compare serial numbers soon, but as my original Imperial 90 isn't even listed as being built in 1974, I don't hold out much hope for finding out what year the replacement was built. I'll report back if I find out anything else.